2021 Kentucky Derby at a Glance

2021 Kentucky Derby at a Glance 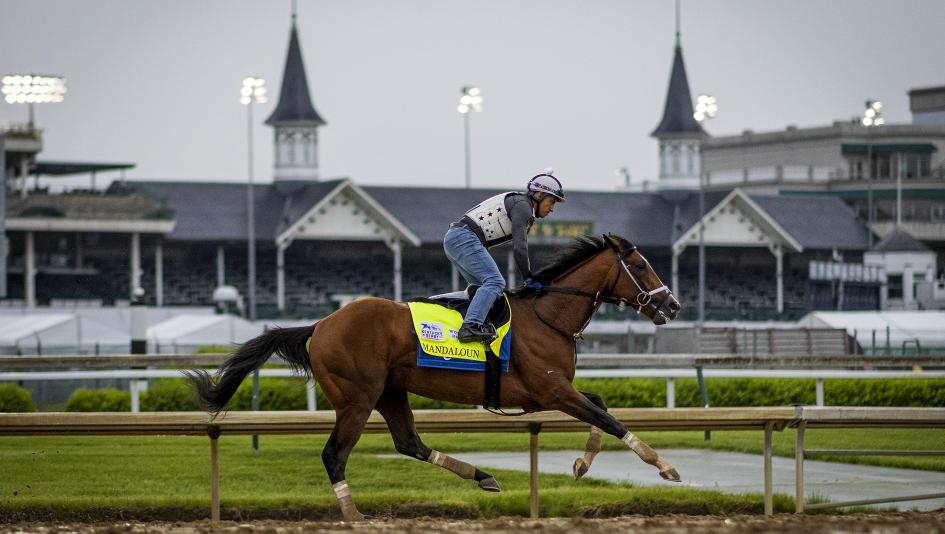 The great American tradition is back in its time-honored spot. After the pandemic forced the 2020 Kentucky Derby to be contested in September, the run for the roses is once again slated for the first Saturday in May.

There’s a standout favorite in champion Essential Quality, but if you’re looking to complete the exacta, half the field, and maybe more, are certainly in that mix. As usual, with a full field of 20, the Kentucky Derby Presented by Woodford Reserve promises to be a spectacular betting affair.

1. Known Agenda (6-1): The relatively new 20-horse starting gate will be on display here and how well it works will be judged by his performance. Though he will not be running into the rail when he breaks from the gate, there’s still a good chance that he’ll be shuffled back unless he breaks sharply and grabs a forward position. On a positive note, he has enough talent to be a winner and if someone can work out a good trip, it’s Irad Ortiz Jr. Yet the possibility of a rough trip and low odds diminish his appeal.

2. Like the King (50-1): With his connections, if this was a five-furlong turf sprint, he’d be 6-5. Even though he’s never finished worse than third in his career with trainer Wesley Ward, with just one dirt race and a loss by nearly eight lengths, he seems up against it here.

3. Brooklyn Strong (50-1): The only thing that has worked out well for him this year was a rash of defections that enabled him to run in the Derby. With only one fifth-place finish under his belt as a 3-year-old, he looks overmatched.

4. Keepmeinmind (50-1): He showed some promise at 2, but his two unplaced finishes at 3 paint him as a big longshot who faces a difficult uphill climb.

5. Sainthood (50-1): Though he earned his spot in the field through a race on an all-weather surface, he had some decent efforts on dirt. But he’s facing significantly better competition here and will be hard-pressed to be a major factor. Other longshots are much more appealing.

6. O Besos (20-1): Speaking of interesting longshots, he staged a nice rally to finish third in the Twinspires.com Louisiana Derby at a 1 3/16-mile distance. He might be getting better at the right time and seems like a good candidate to figure in the exotics at an inviting price.

7. Mandaloun (15-1): His sixth-place finish in the Twinspires.com Louisiana Derby as a 6-5 favorite was surprisingly bad. Actually, it was so surprising that it makes sense to draw a line through it and expect a much more competitive effort here. It’s a risky stand to take, but the price makes that  risk worthwhile.

8. Medina Spirit (15-1): A couple of months ago, trainer Bob Baffert seemed well-stocked in his bid for a record seventh Kentucky Derby win. But then injuries and disappointing performances  left the two-time Triple Crown winner with only Medina Spirit. Though this 3-year-old has never been worse than second — and it’s dangerous to discount Baffert in a Triple Crown race — the colt’s runner-up finish in the Runhappy Santa Anita Derby at 4-5 odds created some significant doubts about his chances in a 1 ¼-mile test.

9. Hot Rod Charlie (8-1): He has a great backstory with his ownership group and a charity they support. His trainer, Doug O’Neill, has won the Derby twice and he was second to Essential Quality in the TVG Breeders’ Cup Juvenile Presented by Thoroughbred Aftercare Alliance. There’s plenty to like, though the six-week break may be a concern for a horse who was in razor-sharp form back then.

10. Midnight Bourbon (20-1): He’s turned in three solid performances at 3 and was second in the Twinspires.com Louisiana Derby. He’s as competitive as they come, but the distance will most likely work against him.

11. Dynamic One (20-1): He seemed en route to victory in the Wood Memorial then was caught at the wire by a 72-1 shot. On one level it was a promising performance, but it’s hard to get past losing to a 72-1 shot in the slowest Wood at that distance.

12. Helium (50-1): If the six-week layoff is a concern for Hot Rod Charlie, his eight-week layoff since a win in the Lambholm South Tampa Bay Derby is frightening. The longest layoff for a May Derby winner is six weeks and it’s difficult to picture him making history here, especially after you read (next capsule) what happened with Hidden Stash.

13. Hidden Stash (50-1): He was second in the Tampa Bay Derby then finished a distant fourth behind Essential Quality and Highly Motivated in the Toyota Blue Grass Stakes. Can’t think of a good reason why he’ll make up that gap in the Derby.

14. Essential Quality (2-1): He’s 5-for-5 and a very deserving favorite. He stood atop the division as a 2-year-old and he’s still the leader now. It takes a special horse to do that and that should give him the edge he needs to give trainer and Louisville native Brad Cox a Kentucky Derby victory in his first try.

15. Rock Your World (5-1): In his first race on dirt, he won the Runhappy Santa Anita Derby. Maybe he’s the next Cigar and he’ll cruise to victory here, but before that happens, he will face a far more vigorous test in a 20-horse field with much better competition.

16. King Fury (20-1): He won the Stonestreet Lexington Stakes three weeks ago in solid fashion and then was the beneficiary of a fortunate turn of events to land a spot in the field. If he moves forward off that race, he’ll be a major threat. Yet it was his only start at 3 and that lack of seasoning could haunt him in the final furlong.

17. Highly Motivated (10-1): He gave Essential Quality all he could handle in the Toyota Blue Grass Stakes before giving way late and losing by a neck. That effort certainly stamps him as one to watch here, though the big question mark is whether such a big effort will move him forward or fatigue him. A better post would have made him a much more attractive play.

18. Super Stock (30-1): He jumped into the Kentucky Derby picture by winning the Arkansas Derby, albeit with the help of a bitter speed duel. It’s unlikely he’ll get that kind of help here but his odds are enticing enough to give him a long look while making your exotic wagers.

19. Soup and Sandwich (30-1): He turned in a nice effort while finishing second to Known Agenda in the Curlin Florida Derby Presented by Hill ‘n’ Dale Farms at Xalapa. He didn’t change leads in the stretch that day and trainer Mark Casse has been trying to correct that. He looks like a horse who can sit just off the pace and his breeding indicates the distance will not be a major problem for him. At the odds, he merits a heavy dose of consideration.

20. Bourbonic (30-1): Yes, he won the Wood Memorial Stakes Presented by Resorts World Casino at 72-1 odds, but, no, lightning does not strike twice, especially from post 20. We’ll pass on him.

Zedan Racing Stables' Medina Spirit  returned to the work tab June 14 for the first time since finishing third in the May 15...

IBM unveils the Quantum System One, its first quantum computer physically built outside of the US, in Germany in partnership with research institute Fraunhofer...