90 People Dead from December Twisters. Tornadoes & Hurricanes Can Happen Anytime of the Year!! Should Meteorology Be Taught in High School? What Is More Useful Knowledge? Dissecting a Frog or Understanding the Dangers of Weather?

90 People Dead from December Twisters. Tornadoes & Hurricanes Can Happen Anytime of the Year!! Should Meteorology Be Taught in High School? What Is More Useful Knowledge? Dissecting a Frog or Understanding the Dangers of Weather?

As always the New York Times has good information with much details that answers most everyone’s questions regarding the rarity of tornadoes in December. Note, when we do have tornadoes in December they are often in the South as the constant warm, moist air from the Gulf of Mexico mixes wickedly with cold, diving winter weather moving across the country. The “spin” set up is there as moisture comes in from the South, sometimes moving NNE and a front comes down at a different angle helping tornadoes to get going faster. The graphc below, with the accompaning link, shows how these forces meet in an environment beneficial to rotation developing. 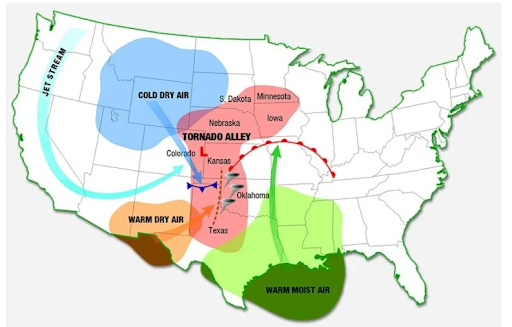 Note the green arrow collides with the blue arrow.

In December this scenario pulls South and East.

The Dixie Alley is a second Tornado Alley. 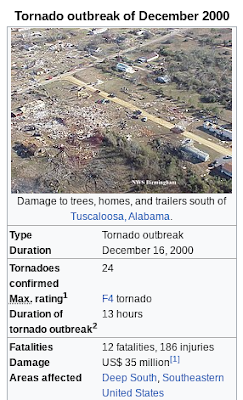 In 2000 Alabama had a deadly tornado outbreak in December where 12 people lost their lives. The link to an article on that outbreak is below that accompanies the graphic above. 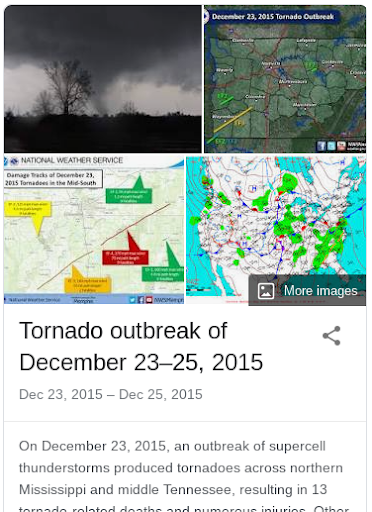 In 2015 Tornadoes raced across Mississippi and Tennessee leaving similar looking damage to what we saw this past weekend on December 16th, 2000. Yes, the scope of the damage was more limited, but similar.

We like to put “seasons” into neat boxes and yet “Tornado Season”  unlike Hurricane Season has no specific start nor end dates to it, but the reality is any time the atmospheric set up is right and way too ripe… tornadoes can happen. That goes for Hurricane Season too, and it’s something well worth remembering!

Hurricane Alice formed so late in December of 1954 that it’s track stretched from 1954 into 1955 giving the Virgin Islands a New Year’s Eve to remember. Alice actually had a more defined eye than many of our hurricane contestants did this past 2021!

My bottom line today is that I really believe there should be more meteorology taught in schools so that the population of the future as they age out better understand a weather warning. What is more useful than learning about weather? When will you ever need to dissect a frog? Yes, there’s some rudimentary biological knowledge learned for the few kids who are not groaning, moaning, looking away or making jokes in class while the frog is being dissected. Yet, the threat of severe weather is not properly understood by the general population at in a time when everything is so accessible online, few take advantage of the information unless they are “weather people” or were hit by a stray December tornado or Hurricane Charley.  Knowledge is power and we should empower children from a young age about a field of science that usually piques their interest to begin with as pretty much every child is spellbound by a hurricane headed their way or the promise of snow or the threat of a tornado.

Generally our “knowledge” starts in Pre-School when the teacher allows Billy or Bonnie to put a sunny sticker on the weather board vs a cloudy sticker.  We need to fix that as the understanding of weather would have saved many lives this past year when Ida’s flooding rains were aimed at New York and New Jersey yet people were out on the highways and died as flood waters dragged their car along with other vehicles under water. It’s not about whether we put out too many weather warnings or watches or the graphics we use are difficult to understand, it is about the fact that a good part of the general public does not undersatnd the most basic facts of severe weather and often think the media is over hyping an approaching storm. Knowledge is power, I’ll say it again and again.

Have a good day today… and please….be sure to give chairty to those in need. Give to the Red Cross or another charity you know is a reliable one with the ability to get the products to the people who need as well as properly distribute money.

Here4dBesthttp://here4dbest.com
Previous articleArchemedis’ “Eureka” moment was not about what you think
Next articlePolitics of Attributing Extreme Events and Disasters to Climate Change – Watts Up With That?

Roller Coaster January 2022 Stock Market. Winter Storms. Florida Colder Than Alaska?? A Look Back at Disneyland in the 80s … Partying All Night...

Watch, But Don’t Worry Yet, About New Omicron Subvariant