A Look at the Tropics When They are “Quiet” … There is Always Something to Watch. SAL vs Strong Waves. GOM Convection with a High aloft. Where Could Surprise Development Pop UP?

A Look at the Tropics When They are “Quiet” … There is Always Something to Watch. SAL vs Strong Waves. GOM Convection with a High aloft. Where Could Surprise Development Pop UP? 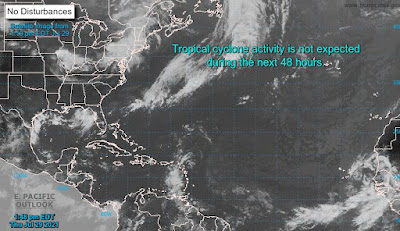 Nothing officially happening for the next 5 days as per the 2 PM from the NHC. That said, often things pop up that we watch and wait to see if there is any model support. Or we go on vacation or a long cruise for a week and figure we won’t miss much. I’m back from vacation for a week so I’m definitely taking a look at the tropics while reading up on the 8.2 Earthquake in Alaska in the early hours of this morning. I love geology, but it’s a second love after meteorology. 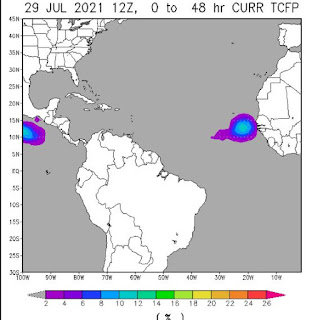 Looking closer there is a huge wave off of Africa that interestingly came off around where they are supposed to come off when the MDR becomes more favorable. With Saharan Dust there still it’s not totally favorable and the water isn’t up to par just yet but that’s a huge wave and it will definitely moisten up the atmosphere and attack the SAL. Again every day of July is a process that takes us one day and one step closer to the real storms of 2021 to show up and when I say “storms” I mean hurricanes. Above we see some blue thrown into the purple splotch indicating it’s an area where something could develop, yet has not developed.  Purple often shows up prior to yellow showing up on the NHC main page. 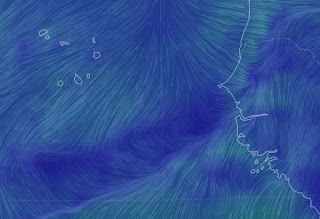 Next we watch Earthnull for signs of something…

….not there tho there is a bit of innuendo. There’s a complex of showers in the GOM.

This has been part of that stationary front. 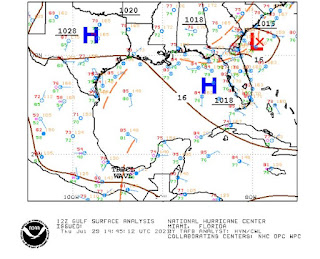 Our pesky Low still is anchored off Georgia.

The High sits on top of the convection.

Models show nothing there developing.

But I’m bored so I’ll watch.

Close in spin ups are often a surprise. 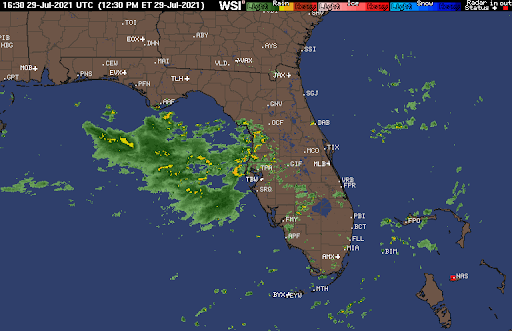 Amps up the rains in Tampa and up the coast here. 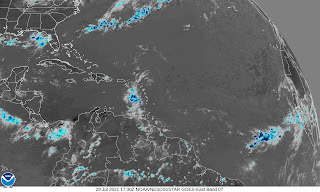 A wave in the Caribbean.

Convection off of West Florida.

I’m not saying anything will pop up I’m just going over the general Atlantic now that I’m back and I don’t like the misconception that when the NHC shows their “nothing” graphic it does not mean there isn’t weather to watch and some possibilities of close in development. So far what’s really kept July quiet is the lack of seriously warm water for tropical waves to work with so far. Yes, I said “so far” twice and now three times because so far only goes so far as we move into August. 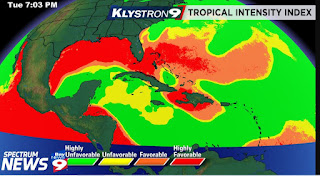 Note that’s basically across the GOM close in.

And in the Bahamas off the Florida coast.

It’s all a process, much like a family vacation. You spend a day with one child and their family, then you spend the next with another child and their family. You work your way over to the Brickell City Centre without the kids and shop at SAKS for some make up, you get some incredible coffee and a cheese croquette you take the Metromover back to their apartment and end up on Miami Beach getting Hamburgers and Israeli Salads even though it wasn’t planned but it happened. CLIMO favored systems are what’s on the schedule, sudden decisions to drive across the Venetian Causeway, look at a few new homes under construction and notice a lot of people and limos with security at the home of a HEAT player obviously having a party while Kanye is strutting his stuff in a soccer stadium while the lights of Miami glitter in the dark water under the bridges lit up in neon lights.  It was supposed to be an evening alone at the apartment but suddenly we were out and about.

Surprises are not planned, but often we can see them possibly coming.

That’s where we are at on July 29th days away from August and each wave comes off of Africa a bit higher and takes another bite out of the Saharan Dust. The water warms up and before we know it there’s a hurricane possibly intensifying headed towards landfall just when you thought 2021 was going to stay quiet because it’s July but it’s not going to stay July nor August and you need to September Remember that in busy seasons or quiet seasons hurricanes will happen. Hopefully they will stay out at sea and not make landfall in your city but hoping doesn’t help you prepare properly. It’s a wonderful illusion when July is quiet but that gets pulled away really fast come August and September.

Get a back up plan.

Buy lots of diapers as they go even faster than toilet paper.

Keep watching… because at some point the NHC takes out it’s yellow crayon again.

Good to be home. It won’t be for long as I’m on the  move this summer.

Tropical Depression 18 Forecast to be Tropical Storm Sam. A Trouble Maker or Just a Tease? Time Will Tell. Lots of Ocean to Roam...

The main news tonight is that TD 18 expected to be Tropical Storm Sam down the road is taking his own time pulling...

What You Can Learn From Ariya Jutanugarn’s Swing