New points leader Hamilton closed to Alonso on lap 55 of 70 in Budapest and the former McLaren team-mates battled wheel-to-wheel, including a brief touch, until a lock up for Alonso enabled the seven-time champion to find a way past for fourth at Turn 1.

Alpine driver Alonso reckoned the pair’s 10-lap dogfight had allowed Hamilton to learn his rival’s superior line through the final sector, which the Brit then adopted to swiftly depose Sainz with five laps to go on to score a podium.

Alonso said: “I thought honestly that I could not hold him more than one or two laps.

“But on the last couple of corners, he seemed to struggle a little bit to follow me.

“Then it was enough to open a gap on the straight and defend.

“I think he learned a couple of different lines in the last three corners after the 10 laps behind me.

“He was able to pass Carlos just in one lap, applying those new lines.”

Hard tyre-shod Alonso clarified that his Alpine team had not specifically instructed him to delay Hamilton, running the faster medium compound, but instead knew to defend against the Mercedes after watching “the situation” on the “biggest TV screens” around the circuit. 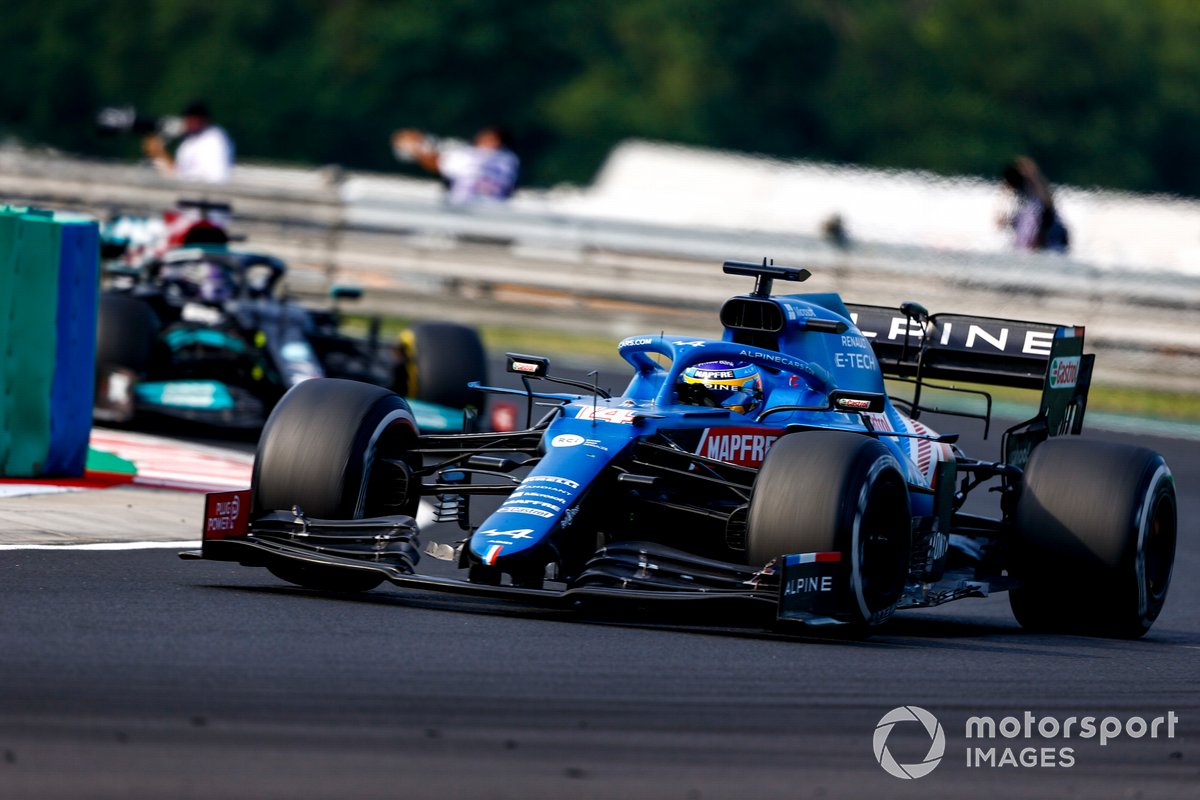 That, Alonso said, had been “gold” for team-mate Esteban Ocon to secure his first grand prix victory after holding off Sebastian Vettel – the Aston Martin runner-up later disqualified for failing to provide a sufficient fuel sample.

Alonso added: “The team didn’t tell me anything.

“[But] I knew that every lap I could hold him behind, that was gold for Esteban’s win.”

The Spaniard, who predicted a Turn 1 incident after qualifying ninth behind Ocon, admitted he was “just lucky” to avoid getting collected by Lance Stroll after the Aston Martin driver ran over the wet grass and eliminated Charles Leclerc before then tagging Daniel Ricciardo.

But Alonso clarified that when he emerged in sixth after the shunts, having swapped his race start intermediate tyres for medium Pirellis, it was “not a gift” of positions.

He said: “I was lucky not to finish my race in Turn 1, like some of the people did.

“We take this top five – it is my best result of the year.

“I’m proud of my race and ‘Driver of the Day’ probably shows that.”

The two-time champion added that he had the “pace to win” initially before becoming “convinced about the podium”.

He said: “I had the pace to win the race probably, or that’s what it seems when you see the race trace.

“[After closing the gap to Sainz], I was so convinced about the podium.

“I was setting the fastest laps of the race, and I thought I will overtake them, and I will try to win the race.

“That was my mind in that moment.

“Then I started realising that maybe winning the race was not possible.

“It was not enough based on the strength, especially when the straight line speed was lacking.

“I started thinking at that time that if I was right behind Carlos with the DRS, I could protect myself from Hamilton, and just finish fourth.”