‘Amlo will keep on being Amlo’: Mexico’s president undeterred by bruising midterms

‘Amlo will keep on being Amlo’: Mexico’s president undeterred by bruising midterms


If Mexican president Andrés Manuel López Obrador was chastened by his losses in midterm elections this month, he has not shown it.

The morning after the June 6 vote, the government published a law to extend the mandate of Supreme Court president Arturo Zaldívar, who is close to the president, in what critics fear may provide a template for López Obrador to extend his own term beyond 2024.

Within days, the president vowed to pursue constitutional reforms in the areas of energy, elections and security, despite having lost the two-thirds majority needed for such changes in congress. He accused the “perverse, slanderous, immoral” media of poisoning voters against him and attacked the middle class as selfish social climbers.

Despite the fiery rhetoric, to some this looked more like business as usual for López Obrador rather than a shift to a more radical agenda after his Morena party lost about a fifth of its seats in congress and more than half the districts in Mexico City.

“Clearly Amlo will keep on being Amlo, and this is something businesses and society have to learn to live with — we’re not going to change him,” said Antonio del Valle, head of the Mexican Business Council representing the country’s biggest companies, using the president’s nickname.

“But after three years, we can understand by now that, just as he isn’t going to change politically, he won’t change his economic policy either . . . and that reassures me a lot.”

Top business leaders have learnt to look past the veteran populist’s incendiary messaging and applaud how he has resisted pressure to borrow heavily for a big spending splurge, like other leftists in Latin America.

One chief executive, who asked not to be named, said the president’s “bark is worse than his bite”.

While his rhetoric remains confrontational, many observers expect little deviation from a plan he mapped out long ago to achieve his vaunted “transformation” of Mexico: social programmes to tackle deep income inequality, infrastructure projects in the poor south-east to create jobs and energy self-sufficiency based on fossil fuels.

After a stint as mayor of Mexico City in 2000-05, in which López Obrador displayed a pragmatic streak, “I was expecting him to be more moderate, and he hasn’t been”, said Porfirio Muñoz Ledo, a totemic figure of the Mexican left and one of the few in the ruling Morena party who is critical of the president.

López Obrador’s desire to extend Zaldívar’s term to secure a potentially more compliant judiciary and his attacks on the respected electoral authority INE, as well as independent regulators, have sounded alarm bells.

Claudia Sheinbaum, López Obrador’s protégée and the mayor of Mexico City, ridiculed what she said had been opposition efforts to portray the election as a watershed for Mexico’s democracy with “this idea that it would be the last time we voted because we were heading for dictatorship”.

“He’s a fiscal conservative, so he won’t be spending money in a dash for growth,” he said. “The chaos and destruction narrative that his opponents have always tried to say would happen — I don’t buy that . . . He’s not the next Chávez, he’s quite unique.”

After winning a landslide in 2018, López Obrador has kept supporters loyal with handouts, higher pensions and big increases to the minimum wage. His stubborn refusal to take on more debt meant there was no Covid-19 stimulus programme, triggering a deeper recession last year than in many Latin American peers. 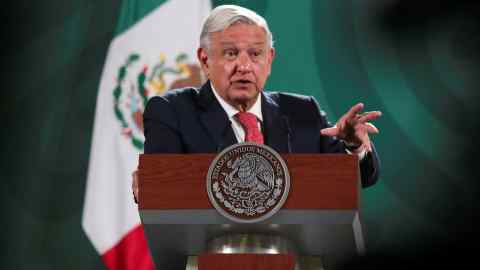 Jorge Castañeda, a former foreign minister from the conservative PAN party, said he believed López Obrador had wasted an opportunity to use his “enormous legitimacy” to enact far-reaching reforms.

“What you have to do is what he hasn’t done, although he could have: a serious tax reform,” he said. López Obrador has promised to close loopholes rather than raise taxes.

“It could seem short-termist, but it’s a pragmatic logic,” said Gerardo Esquivel, a deputy governor of the Bank of Mexico. “All past attempts at fiscal reform have been political flops . . . In his opinion, it’s more transformative to make people pay what they have to and get salaries where they should be.”

Mexico’s economy is now on the rebound after contracting 8.5 per cent in 2020 and is heading for growth of 6 per cent or more this year, helped by President Joe Biden’s $1.9tn stimulus package in the US.

But a climate of uncertainty lingers, stoked by López Obrador’s cancellation of partially built airport and brewery projects, weighing on the investment that Mexico needs to break out of its traditionally weak growth rates.

López Obrador’s unrelenting attacks on political enemies, including the rich, the media and the business class, have also fuelled concerns about the risks of further dividing an already deeply fractured and violent society.

“The most important thing is to stop the polarisation of the country: rich versus poor, north versus south,” said the chief executive of one Mexican bank. “We all need to row in the same direction for the boat to advance.”

Here4dBesthttp://here4dbest.com
Previous articleEM Equities – A Hot Pick Now Out Of Favor
Next articleVaccination mandatory for aged care workers as AstraZeneca made available to all Australian adults | Australian politics

Introduction to the Chip Shot