Argentina tries to export its way out of economic crisis

Argentina tries to export its way out of economic crisis


The Argentine government is sticking to its widely derided claim that it can double exports in the next five years, despite a struggling economy and the suspension last month of one of its key exports — beef.

Argentina is one of the countries worst hit by coronavirus, which has deepened an economic crisis that struck three years ago. Inflation is running at 49 per cent and negotiations with the IMF over the repayment of a $44bn loan have stalled, unnerving investors.

Even so, Matias Kulfas, production minister, insists the economy is turning a corner.

“This is a crucial moment when many investments are maturing which are going to allow a significant leap in exports,” Kulfas told the Financial Times.

Kulfas argues that new projects in sectors such as mining, energy, manufacturing and the automotive industry could lead to a doubling in exports from around $65bn over the next five years.

We have an economy that today is moving at different speeds. There are sectors like industry, construction and agroindustry that are growing, and in some cases growing a lot, while other sectors [such as tourism] have been very hard hit.

Private economists and analysts reject that forecast as overly rosy. While the IMF predicts growth of 5.8 per cent this year as the agricultural powerhouse benefits from booming commodity prices, the economy contracted 10 per cent last year — it is nowhere near returning to where it was pre-pandemic.

Kulfas cited investment announcements worth around $20bn since President Alberto Fernández took power in December 2019. He said new mining projects alone could add some $12bn to exports, while Argentina’s burgeoning knowledge economy is expected to bring in an additional $4bn in the coming years.

“The fact is that the potential exists and so does the international demand. That’s the reality. Then we’ll see how much success we have in [ensuring that all these projects] actually go ahead,” said Kulfas, underlining that much also depends on how quickly projects advance.

Although many agree that boosting exports is the clearest path to ensuring sustained economic growth in a country with an endemic shortage of foreign currency, Argentina has consistently struggled to do so. Since 1950 the economy has been hit by repeated crises leaving the country suffering more time in recession than any other country except the Democratic Republic of Congo.

“At the rate they’re going, I don’t see Argentina anywhere close [to doubling exports in the next five years],” said Martin Rapetti, a local economist.

Rapetti agrees, however, that the government is focusing on the right sectors. “What I am not seeing are signs that they are going to implement the policies so that this can happen,” he added, fearing that other more radical leaders in the diverse ruling coalition could undermine Kulfas’s efforts.

Last month, beef exports were suspended for 30 days after local prices doubled over the past year, hitting domestic consumption of one of the country’s most emblematic products. Many officials were concerned that this could harm the government’s popularity ahead of key midterm elections in November.

One local producer scoffed at Kulfas’s hopes to double beef exports in the current circumstances: “It will not happen with [export taxes] and a controlled exchange rate . . . We are losing clients every day, and some of them will be hard to get back.” 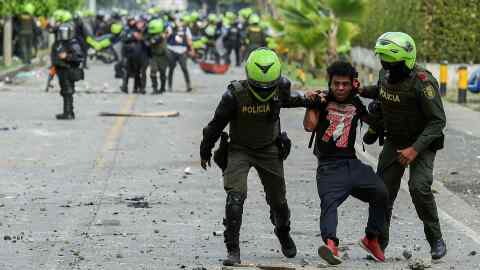 The government’s penchant for intervening across all sectors of the economy — from price and currency controls and tariff freezes to threats of nationalisations — has led many to fear that the private investment needed to boost exports may not be forthcoming. Adding to these fears is the growing influence of the vice-president, former leader Cristina Fernández, who was notorious for constant intervention in the economy.

Kulfas agreed that policy predictability was essential for investment. “It’s an important part of what enables investments to continue over time. Unfortunately our point of departure was very negative,” he said, pointing to the need to restructure Argentina’s public debt “which generates much uncertainty” as well as a bulging fiscal deficit and depleted foreign exchange reserves.

While the government attempts to fix these problems, Kulfas insists that investments have continued to arrive, and that the economy is recovering. He points out that the industrial sector is already producing more than in 2019 before coronavirus struck.

“We have an economy that today is moving at different speeds. There are sectors like industry, construction and agroindustry that are growing, and in some cases growing a lot, while other sectors [such as tourism] have been very hard hit,” said Kulfas.

He denied that there had been an exodus of foreign companies from Argentina since Fernández took power. He said the departure of Walmart last year was because of an international restructuring plan, and the local company that bought the business had continued investing.

“We are seeing the opposite [of an exodus], many sectors are positioning themselves because they see that Argentina is at a turning point,” he said.

Even so, Emily Hersh, managing partner of DCDB Group, a financial advisory firm with offices in Buenos Aires, is sceptical: “Not a lot of deep pockets want to put serious money into Argentina right now.”

Whether or not Argentina’s incipient and patchy economic recovery this year is to be longer lasting depends a great deal on the country’s ability to modernise its economy, says Kulfas, who is focusing on developing new sectors such as lithium, renewable energy and medicinal cannabis.

“Many people ask me, do you really think it’s the moment for a digitisation programme . . . [or] to talk about the green revolution? And I say, yes. It’s now. Because every year that goes by, we are going to fall further behind the changes taking place in the world . . . and miss the train.”