Staged at Caja Magica, the Mutua Madrid Open had switched surface from indoor hard to clay in 2009, finding its place in the calendar in May and joining Monte Carlo and Rome as one of three most significant events on the slowest surface after Roland Garros.

The Madrid Open didn’t take place due to the pandemic in 2020, and it returns to the calendar next week, gathering the world’s leading players except for the defending champion Novak Djokovic and the inaugural winner Roger Federer.

Rafael Nadal will be the top seed in front of the home fans, seeking the sixth Madrid Open crown and the fifth at this venue, celebrating the first on an indoor hard court in 2005. Federer, Nadal and Djokovic have won nine of the last 11 editions of the Madrid Open, and the Spaniard will try to lift the first Madrid Open crown since 2017.

Nadal won the title in Barcelona last Sunday, saving a match point against Stefanos Tsitsipas in the title clash for the first title since October last year.

Rafael Nadal is drawn in the same half with Dominic Thiem.

Nadal will face Adrian Mannarino or the young compatriot Carlos Alcaraz in the second round before a possible blockbuster third-round meeting with Jannik Sinner, one of the most talented stars of the younger generation.

Alexander Zverev, Kei Nishikori, Karen Khachanov, Daniel Evans and Hubert Hurkacz are also in Nadal’s quarter, hoping to set the clash against the 20-time Major winner. Dominic Thiem and Andrey Rublev are the players to beat in the second quarter, facing Alex de Minaur, Roberto Bautista Agut, John Isner and Grigor Dimitrov before a potential clash for a place in the semis.

Dominic Thiem hasn’t played since March, taking a couple of weeks off from tennis and recharging batteries ahead of Madrid. On the other side, Rublev defeated Nadal in Monte Carlo and reached the Barcelona Open quarter-final, hoping for another good run in the Spanish capital.

In the third quarter, Diego Schwartzman and the Monte Carlo champion Stefanos Tsitsipas are the top-ranked players, with Filip Krajinovic, Casper Ruud, Felix Auger-Aliassime and Aslan Karatsev wishing to spoil their party and reach the semis. 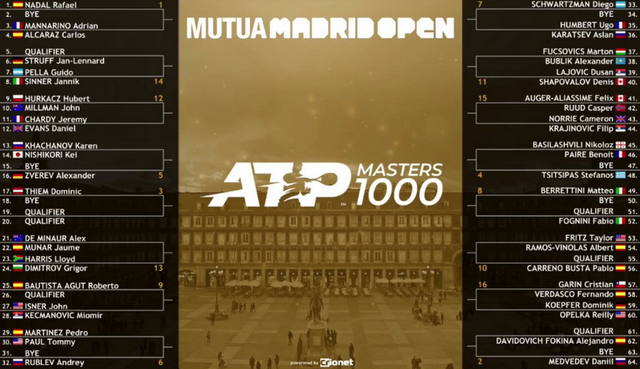 ‘I’m sure Roger Federer will work it out’, says Grand Slam champion

Roger Federer claimed eight titles and 101 wins at Wimbledon in the past two decades, won the junior title in 1998 and competed...