US president Joe Biden has urged Israeli prime minister Benjamin Netanyahu to de-escalate tensions in the Gaza Strip, ramping up US pressure for a ceasefire to end the nine-day conflict.

In a White House read-out from a call on Wednesday morning, Biden told his Israeli counterpart that he “expected a significant de-escalation today on the path to a ceasefire”.

Israeli strikes have killed 227 Palestinians, including 102 women and children, Gaza health officials said. 1,620 have been wounded, they said.

Israeli army officials said 130 of the dead were Hamas combatants, and disputed — without evidence — Gazan estimates that nearly half of the dead were women and children. Israel has reported that 12 Israelis have been killed in Hamas attacks, including two children. Two Thai workers have also been killed.

Hamas has fired more than 3,400 rockets into Israeli cities since the fighting began. The militant group fired about 50 rockets overnight, according to newswire reports.

The Israeli bombardment of Gaza has forced tens of thousands of Palestinians in the walled-in strip to flee their homes, as houses, health facilities, schools, shops and infrastructure have been destroyed or damaged.

A UN agency situation report stated 156 buildings, comprising 672 housing and commercial units, had been destroyed in Gaza. Hundreds more houses had been severely damaged and rendered uninhabitable, it added.

Six hospitals and 11 primary healthcare centres have also been damaged. The UN and the Palestinian Centre for Human Rights said the strip’s only Covid-19 laboratory was no longer able to conduct tests because of an Israeli air strike.

The Office of the UN High Commissioner for Human Rights has warned that “given the impact on civilians’ lives and on civilian infrastructure, including humanitarian organisations and medical facilities, the incident raises serious concerns over a possible indiscriminate and disproportionate attack under international humanitarian law”.

“This has been the worst of the wars against Gaza in terms of destruction of the infrastructure,” said the worker, who did not want to be identified, adding that sewage was pouring on to the streets in some areas.

Farmers who cultivate land near the border have not been able to access their fields to water or harvest for a week, a threat to vegetable crops that could create shortages in the impoverished, densely populated strip of 2m people.

As the death toll has mounted, diplomatic efforts to secure a ceasefire have intensified. Biden has faced rising criticism from American progressives, including within his own Democratic party, who want the administration to exert more pressure to stop the hostilities. 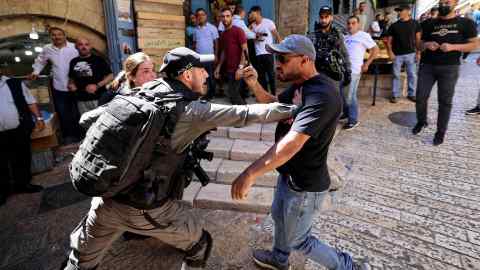 France, Egypt and Jordan have made a joint call for a UN Security Council resolution for a ceasefire to end the bloodshed, the French presidency said on Tuesday.

EU foreign ministers also urged an end to the hostilities at an informal meeting on Tuesday, with all member states but Hungary supporting the “general thrust” of a common statement that urged an immediate end to the violence.

The unrest has spread to the occupied West Bank, where on Tuesday Israeli forces killed at least four Palestinians, according to health officials in the territory. The Israeli military said its forces shot a Palestinian in Hebron, whom it said attacked soldiers with an explosive device and a knife.

Israeli police said two members of the security forces were shot in the leg during protests in Ramallah, the first such incident in the West Bank for years. The city is the seat of Fatah, Hamas’s rival Palestinian faction.

Israeli forces have killed more than 20 Palestinians in the territory since protests began on Friday, West Bank health officials said.

The latest crisis was triggered when police used rubber bullets, tear gas and stun grenades against Palestinians protesting against restrictions at the compound of al-Aqsa mosque, Islam’s third holiest site. More than 600 Palestinians were wounded. The mosque is in a compound in Jerusalem known to Muslims as Haram ash-Sharif and to Jews as Temple Mount, and is sacred to both religions.

The Israeli military said four rockets were fired from Lebanon into Israel on Wednesday, adding that its air defence system intercepted one and the rest “most likely fell in open areas”. In response, Israeli forces were striking a number of targets in Lebanon, it said.