Breath of the Wild: The Magic Kingdom of Games

Breath of the Wild: The Magic Kingdom of Games

If Nintendo Switch’s “Year in Review” feature is any indication, my #2 hobby of 2021 was playing the Legend of Zelda: Breath of the Wild. Walt Disney World doesn’t offer up similar stats on how much time or money we spent in the parks (probably for the best), but it’s safe to say that was #1.

Despite “finishing” the game early in the year, Breath of the Wild was my most played game. I arrived late to the Zelda party, but made up for lost time. After falling in love with Breath of the Wild, I bought a Wii U and played Wind Waker, Twilight Princess, and Ocarina of Time over the course of the year. Majora’s Mask, Skyward Sword and Link’s Awakening are all waiting in the wings for 2022 as I anxiously await BotW’s sequel.

While I’ve enjoyed all of these games, nothing reaches the same heights for me as the Legend of Zelda: Breath of the Wild. (My perspective might differ if I grew up on and had nostalgia for the older games.) It’s simply the best video game I’ve ever played, as well as my personal favorite. In trying to explain its appeal, something clicked for me: Zelda Breath of the Wild is the Magic Kingdom of video games.

More accurately, Zelda Breath of the Wild is the Tokyo Disneyland of video games. After all, Nintendo is headquartered in Kyoto, Japan. If its creators were inspired by any Disney theme parks, it would probably be Tokyo Disneyland and DisneySea. (Ironically, despite the new Super Nintendo World in Universal Studios Japan, which is much closer to Kyoto, there are no discernible parallels between USJ and Hyrule.)

That might seem far-fetched, but it wouldn’t be without precedent. Shigeru Miyamoto, the iconic creator of many beloved video game franchises, famously drew inspiration for Star Fox during a visit to Fushimi Inari Shrine near Nintendo’s headquarters in Kyoto. It thus wouldn’t be the least bit surprising if when Nintendo was first conceptualizing the game, Miyamoto and Zelda series producer Eiji Aonuma took the team on a “field trip” to Tokyo Disney Resort.

As for the substance of the similarities, the parallels between The Legend of Zelda: Breath of the Wild and Disney’s castle parks begin with their respective maps. Both use a hub and spoke design with a castle at the center.

When placed side-by-side, the maps of Tokyo Disneyland’s Cinderella Castle and Breath of the Wild’s Hyrule Castle are uncanny. Both have open courtyards in front of their respective castles, bridges flanking the sides, and similar approaches. The similarities don’t end there. The Kingdom of Hyrule, a medieval fantasy land, has regions that radiate out from this central plaza, with areas themed to different environments and populated by unique casts of characters. You can even attempt to pull a sword from a stone behind both castles!

Although Hyrule is sprawling, navigation is relatively easy thanks to large mountains, Hyrule Castle, and other icons. Sound familiar? Walt Disney himself coined the term “wienie” to describe visual magnets that assist guests in navigating Disneyland and draw them from one area of the park to another. Same idea in Hyrule. When comparing the respective lands in Breath of the Wild and Tokyo Disneyland, tenuous connections could be made between each. However, I’d argue that the more direct comparisons lie with Tokyo DisneySea.

Both have areas set under the sea, in the dessert, dense forests, and developed villages. Then there’s the most direct counterparts, the volcanoes of Death Mountain in Breath of the Wild and Mysterious Island in Tokyo DisneySea. 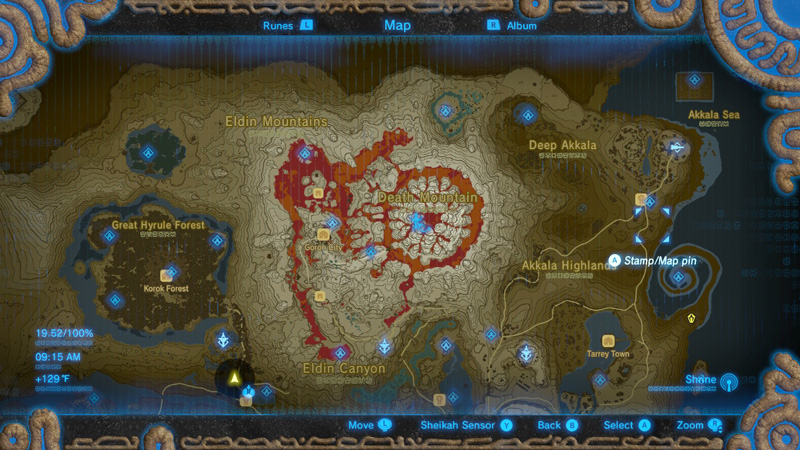 In actuality, if Tokyo Disney Resort did serve as inspiration for the Kingdom of Hyrule, it’s most likely an amalgamation of the two parks. There’s the core conceit of disparate lands in the castle parks, mixed with some of the specifics at Tokyo DisneySea.

There are also many elements that were clearly discarded, like the monorail circling both parks or DisneySea’s version of New York. (Maybe that was set aside for Super Mario Odyssey’s New Donk City?!) There’s also the towering presence of Duffy, who I guess you could say is like Link or Ganon, depending upon your opinion of that polarizing bear. 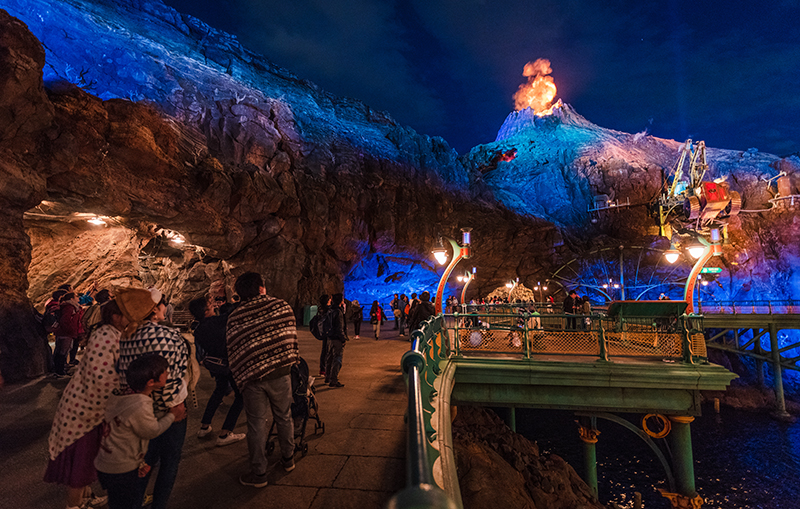 It’s also entirely possible the map similarities are entirely coincidence. The foundational elements of Disneyland have been hugely influential on urban design and architecture; many castle park principles have been replicated and applied beyond theme parks in the decades since Disneyland debuted.

While the resemblances wouldn’t be as uncanny, you could probably take just about any open world video game map and overlay it onto Disneyland and find at least some connections. Well-designed open world games use a lot of the same layout and wayfinding principles. For these reasons and others beyond the scope of this post, video games and theme parks actually are much more alike than you might expect. 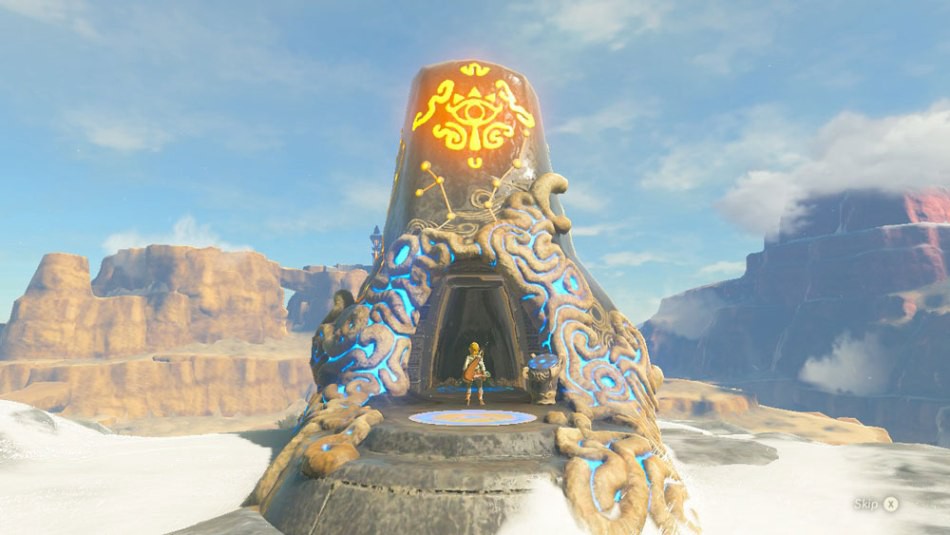 To that point, the Legend of Zelda: Breath of the Wild engages players in some of the same ways as a Disney theme park. Most notably, its map is scattered with a variety of attractions. These primarily take the form of Shrines, which each feature a central theme. (Again, sound familiar?) Essentially, you need to solve a series of puzzles or engage in combat to defeat a monster. (Okay, not so much!)

If I felt compelled to stretch the comparison, the case could be made that a disproportionate amount of time at each Shrine is spent figuring out how to approach its challenge, with far less time actually doing the thing. This is loosely analogous to time spent in line v. riding an attraction at the Disney parks. That’s a fair point, but I think the very existence of “attractions” peppered across the respective maps is similarity-enough.

Beyond attractions, one of the reasons so many of us are Disney theme park fans is because there’s more to them than meets the eye. Sure, you could go and just ride all of the rides, which is what many casual visitors do.

But the deeper connections seem to be born of appreciating other elements of the experience. There’s no singular reason why people are fans of Walt Disney World, Disneyland or Tokyo Disneyland. There are tons of sub-interests or things to do beyond the attractions that turn people into diehard fans and keep them coming back. 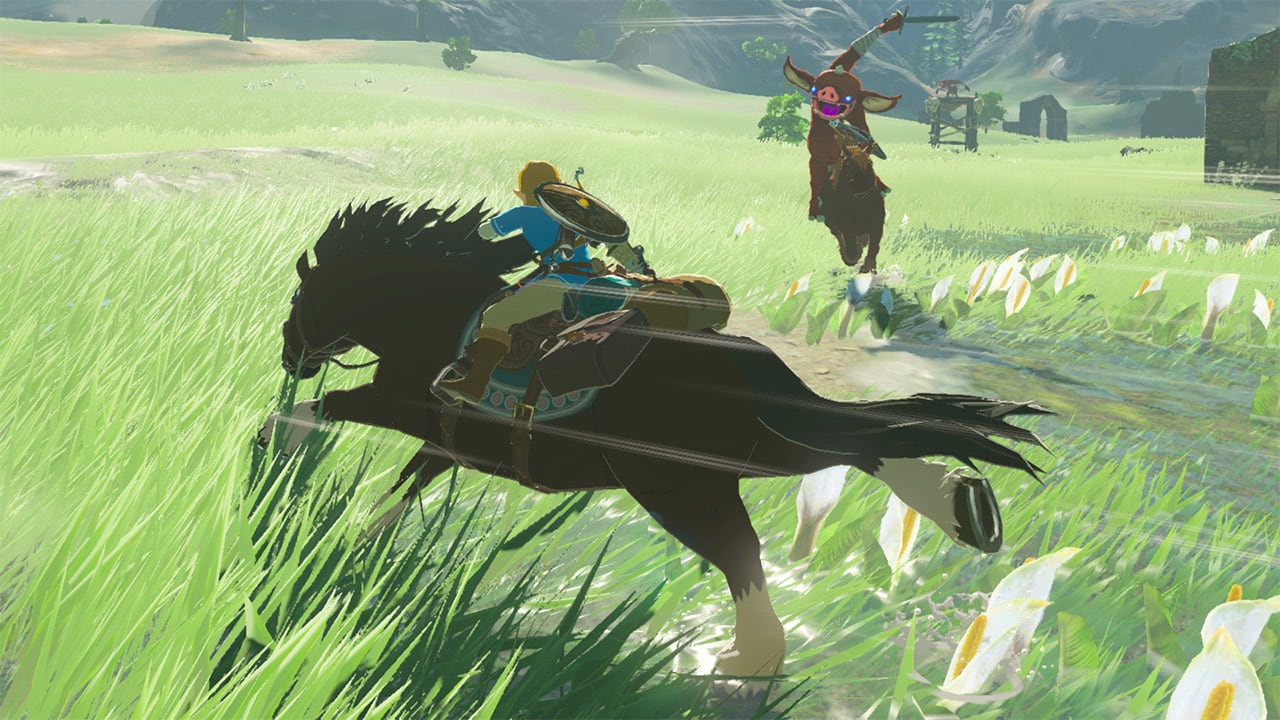 Same goes for the Legend of Zelda: Breath of the Wild. You can catch and ride horses, buy and renovate a house, snowboard, shop for new clothes, test recipes and cook meals, befriend dogs, or simply stroll around and listen to beautiful background music, and so much more–the possibilities are literally endless. My personal favorite is tracking down and hunting Lynells, which usually involves (me) dying a lot.

(In this “something for everyone” regard, another game comes to mind: Animal Crossing New Horizons. Sarah is a non-gamer, and this is her game of choice as a way to relax. Zelda has a much steeper learning curve, and a lot more dying–but it’s also much more satisfying once you master it–another similarity to learning the ropes of Disney trip planning!) As with Disney’s theme parks, there’s also the artistry and design of the Legend of Zelda: Breath of the Wild. Beyond both being creative endeavors that represent the high water marks in their respective mediums, I wouldn’t say there’s a ton in common between the art direction in Breath of the Wild and Magic Kingdom, DisneySea, or the Disneylands.

The clearer parallel here is instead to Studio Ghibli. The overarching art style in Breath of the Wild is incredibly reminiscent of many Studio Ghibli films, and there’s also a lot of thematic overlap. Princess Mononoke is one specific example, but so too are the Studio Ghibli movies involving flight, ancient technology, or the interplay between human and natural worlds…which is pretty much all of them! (A different topic for a different day, but every Disney fan should really watch Studio Ghibli’s films, too.)

Ultimately, that’s a non-exhaustive rundown of why the Legend of Zelda: Breath of the Wild reminds me of Disney’s theme parks–and why I’d highly recommend it to literally anyone (not that a game with its accolades needs my endorsement, but I know some people are still baselessly dismissive of video games). From the outside, the layout is probably the most persuasive point, but that’s the least compelling to me as someone who has spent extensive time in each of these worlds.

It’s tough to put my finger on everything else. More than anything, it’s probably the sense of fantasy, awe and wonder that each evoke. Before Breath of the Wild, I had never played a video game that felt like a lived-in world that actually got me excited to explore. The sense of discovery as you experience and learn new things also reminds me very much of Disney’s parks, and is a big part of why I keep returning to those–and this game.

Need Disney trip planning tips and comprehensive advice? Make sure to read Disney Parks Vacation Planning Guides, where you can find comprehensive guides to Walt Disney World, Disneyland, and beyond! For news & rumors, on-the-ground updates, discount information, free downloads of our eBooks, and much more, sign up for our FREE email newsletter!

Have you played Breath of the Wild or any other Zelda game? See the parallels between the Kingdom of Hyrule and Disney’s theme parks? Anyone else ‘endorse’ Breath of the Wild for Disney fans? If you’ve never played, does this make you curious about the series, or are video games not your thing? Any questions? We love hearing from readers, so please share any other thoughts or questions you have in the comments below!

It’s time for another Walt Disney World news roundup! This one covers the latest changes to park hours & Extended Evening Hours, this...

2022 Epcot Festival of the Arts Review

The 2022 Epcot International Festival of the Arts is back in full form, proving once again why Walt Disney World’s first event of...