While fighting for the lead on the opening lap of the Silverstone race, Hamilton’s left-front wheel hit Verstappen’s right rear, sending the Red Bull driver into the tyre barriers, the Mercedes driver able to continue in the race.

A safety car period was called immediately after the collision before the race was red-flagged in order to allow track marshals and workers to repair the barriers and recover Verstappen’s damaged F1 car.

During the stoppage, Mercedes inspected Hamilton’s car to assess the damage from the incident with Verstappen, which was when an issue with his left-front wheel rim was spotted, and the parts were duly replaced.

Given Hamilton’s team was unable to detect the potential problem while the driver was on the track, Mercedes trackside engineering director Andrew Shovlin believes had the race not been stopped the damage would have resulted in a car retirement.

“We’d failed the rim where we had the contact at the front left, so that would’ve been a DNF had it not been red-flagged,” Shovlin said after the British GP.

“But the rest of the damage was actually remarkably little. It was a tyre temperature sensor that had got knocked loose so it was waggling around but, amazingly, it’s the least important part on the front wing and it was the only one that broke.” 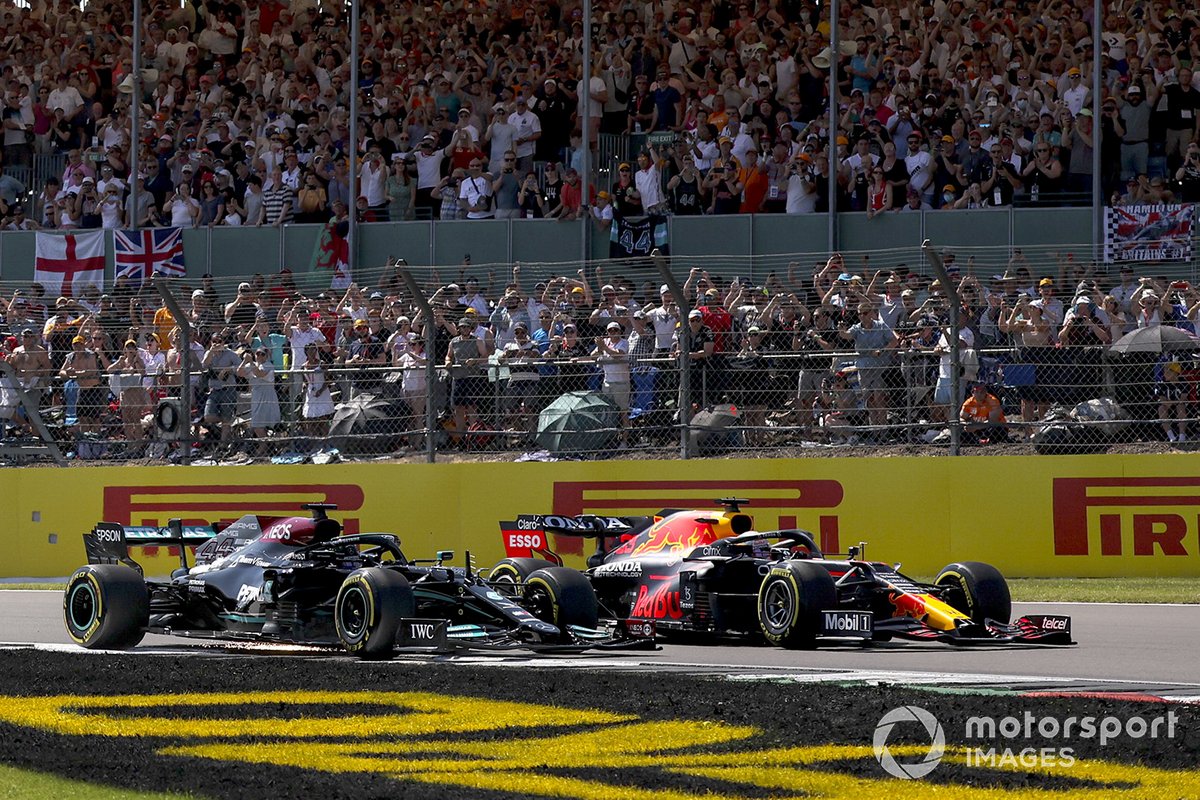 Despite being handed a 10-second time penalty for the incident with Verstappen, Hamilton recovered to reel in Charles Leclerc in the lead and overtake the Ferrari driver with two laps to go.

After serving his penalty, Mercedes’ race strategy predicted Hamilton would catch Leclerc with two laps to go and Shovlin felt a “switch” in the British driver’s mentality when he knew he had a strong chance of winning his eighth British GP.

“From our planners during the race which are forecasting it live, we were looking at catching him with two laps to go,” Shovlin explained.

“When we thought it was on was probably five laps into that, you normally see the drop on the tyres and you could just see Lewis holding this eight-tenths advantage to Charles every lap.

“Lewis just wasn’t dropping off and the balance was happy. And, to be honest, with Lewis, you can hear it in his voice in what he’s saying on the radio.

“You just get this switch where he knows in his head he’s going to do it today and, to be honest, it was really nice sitting on the pitwall just watching that final stint unfold because it was a great and well-deserved win.”

Here4dBesthttp://here4dbest.com
Previous articleOfficials Left Dams Full For Weeks Even With Heavy Rains In The Forecast – Watts Up With That?
Next articleWebcam Captures 17 Bears Feasting On Salmon In Alaska