Cold Fronts VS Tropical Waves. Volcanic Ash in the MDR Dirtying Up the Atmosphere … Fires in the West. October!

Cold Fronts VS Tropical Waves. Volcanic Ash in the MDR Dirtying Up the Atmosphere … Fires in the West. October! 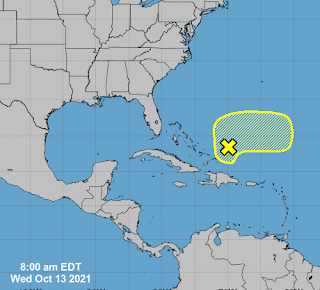 Boy does that image say it all!

Without a visible satellite image added. 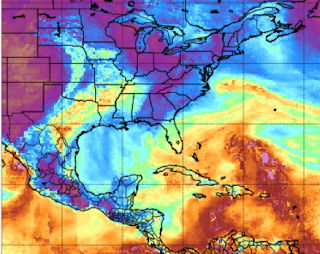 …ready to blow across the Country.

Sweeping up anything in the tropics.

When I was a kid growing up in Miami you waited all October and way deep into November for a good cold front to actually SWEEP through Florida rather than limp across the finish line up near the Lake and then go flat across South Florida. People, like Mike, up in Tampa are celebrating with their fire pits and people in Miami are still sweating and waiting for a short lived, breath of fresh air. Why, yes I am a bit traumatized, thanks for noticing!

Now in North Carolina I see the progression of the fronts and I know our warm, subtropical Indian Summers have an expiration date on them. So does the hurricane season.

The same fronts that make it down across South Florida often stall out and that convection can sometimes spring up an area of suspect and some models do that but most models do not. There is a nice mess of convection in the Caribbean that actually has a bit of a “I want to spin” look to it yet it is not forecast to develop. Maybe like Pamela it gets into the Pacific or lingers down around Central America a bit waiting for a model to notice all it’s talent and see it’s wealth of possibilities.

Til then….we got nada. Nothing much to talk about but fires out West and Volcanoes to our East that have pumped tons of ash and dry air into the tropical Atlantic basically shutting down the MDR this year. And, i have seen this before and I could write blogs on how a certain volcano in the Caribbean shut down that part of the season years back. I worry so much on pollution and climate themes, holding onto garbage to find a garbage can because the image of a friend of mine who thinks it’s up there with the 7 Deadly Sins to throw garbage anywhere but a garbage can makes me feel too guilty to drop it anywhere but in the garbage can and YET…………. for all of our cleaning up the way we emit crap into the atmosphere one volcano can spew forth, voraciously tons of crap into the air … posonous crap the way a kid vomits up too much candy on Halloween.  Yes, that was a long paragraph and run on sentence, thank you for noticing.

Gonna enjoy my last day here in Charlotte before going back to Raleigh and maybe find a cute shirt or high pair of boots I can wear for my date with that wicked looking cold front that may actually cool us off for more than a New York minute. With every strong cold front the chance of development in the tropics that could impact us goes down, but if it forms down in the Caribbean there’s always a chance…

Love you all, especially you know who 😉

Ps I wanted to go to Boston to study Political Science at a college there that didn’t impress my mother. I was way under 18 when I graduated from highschool and she wouldn’t let. But it’s always been one of my favorite towns, even before I was converted into being a RedSox fan. Maybe I just wanted a real winter 😉 after living my whole life in Miami! Nah, it’s an awesome town…. love that dirty water!