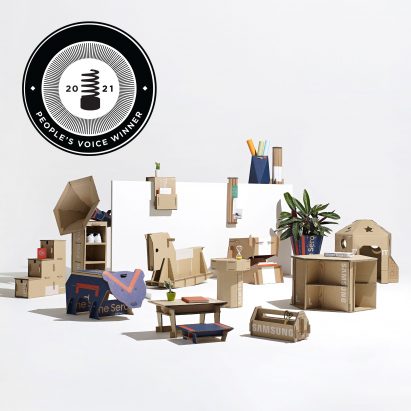 Our Out of the Box collaboration with Samsung has won a People’s Voice prize at this year’s Webby Awards. Thank you to everyone who voted for us!

The Dezeen x Samsung Out of the Box Competition won the public vote in the branded content category for products and services.

The competition, which asked contestants to design objects for the home by repurposing TV packaging, was one of our most successful brand collaborations to date.

It received over 1,500 entries from more than 80 different countries and generated over 20 million impressions, a million video views and coverage in more than 60 publications around the world.

The contest was won by recent Royal College of Art graduates Sarah Willemart and Matthieu Muller, who designed a series of animal companions for children, including a polar bear.

To encourage people to vote, we launched a campaign with the tagline “share the bear”, which featured an image of the winning design.

We then updated the campaign with an image of André Cardoso’s second-placed rocking horse design and asked readers to “back our horse” in a final push to win the prize.

The campaign worked! Thanks so much to all our readers who took the time to vote.

The award was announced last night at a virtual Webby Awards ceremony hosted by Jameela Jamil.

These prizes followed our most successful year ever in 2020, which saw us achieve record traffic and pick up six awards. Our Virtual Design Festival initiative, which was also an honouree at this year’s Webby Awards, was particularly decorated.

Dezeen previously won a Webby Award in 2015 for our video interview with musician Imogen Heap about her Mi.Mu gloves.

The video, which was part of our Dezeen x MINI Frontiers partnership with car brand MINI, recently reached a million views on YouTube.

Once you dislike a brand, is it possible to change your mind?