ECR’s Indy 500 bid unravels after leading the most laps

ECR’s Indy 500 bid unravels after leading the most laps 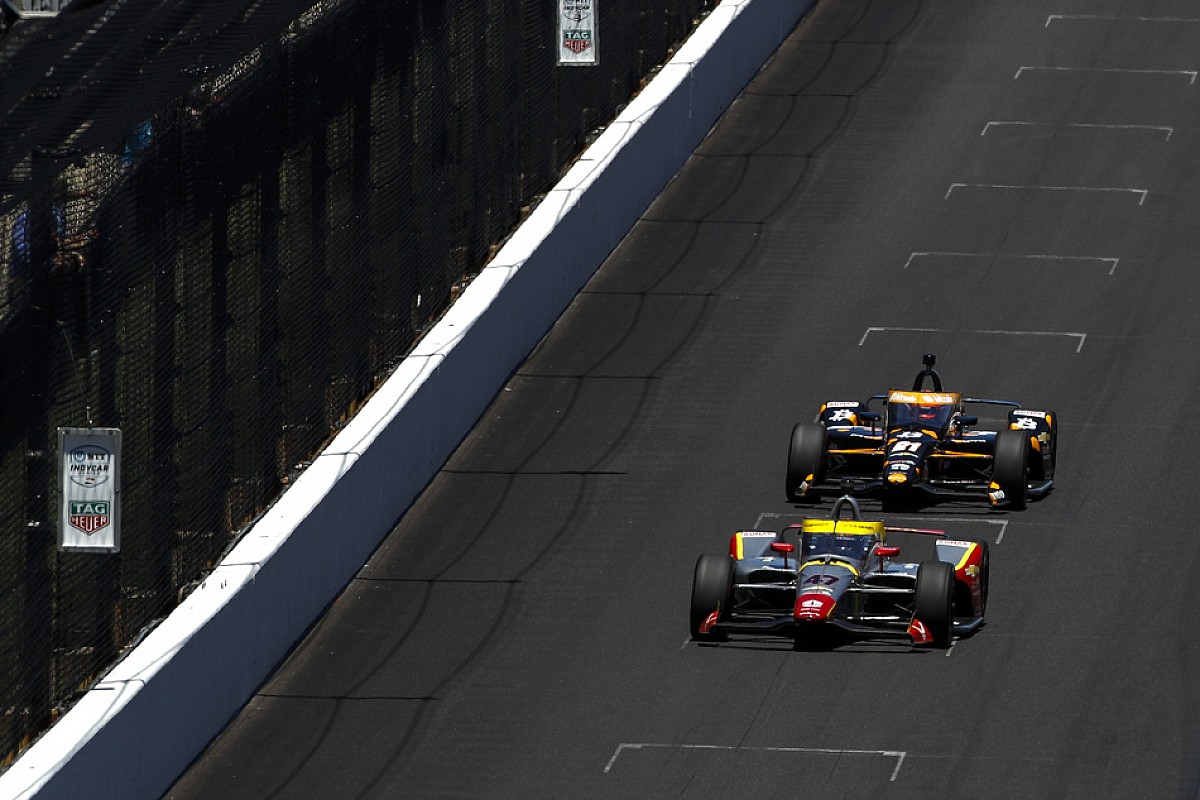 VeeKay and Daly led a total of 72 laps at the 2021 Indy 500, the highest of any team, but after late mishaps, their team boss Ed Carpenter was the highest-finishing ECR-Chevrolet driver in fifth.

VeeKay started his second Indy 500 on the front row and the winner of IMS’s road course race, the GMR Grand Prix, seemed desperate to lead both Month of May races.

With polesitter Scott Dixon and second-placed Colton Herta happy to save fuel in the opening stages, the 20-year-old Dutchman took to the front in the #21 Bitcoin Dallara-Chevrolet and led the first stint until his first pitstop.

An unfortunately timed yellow during the first pitstop sequence removed several frontrunners from contention, including Ganassi’s Dixon, while VeeKay’s teammate Daly vaulted from 18th to third.

Local hero Daly was the next Ed Carpenter Racing driver to command the race, leading 40 laps, more than any other driver.

On lap 119 Daly’s fortunes changed when he was hit by a flying wheel from Graham Rahal’s wrecked Rahal Letterman Lanigan Racing car.

Daly managed to carry on, but damage to his nose caused his No. 47 U.S. Air Force Dallara-Chevy to understeer, and he fell back to 13th at the line.

“The reason we did not win was because of our front wing; after Graham Rahal crashed, a giant tire just fell out of the sky,” Daly said.

“The car started understeering quite a bit, but it was nice to be out front in the first half. We proved today that we are capable and belong up there.”

Due to a slow final pitstop VeeKay also lost touch with frontrunners Palou, Patricio O’Ward and eventual winner Helio Castroneves, dropping him to an eighth-place finish.

“Leading over 30 laps today feels great,” VeeKay said. “I am very happy with how I did and being able to finish eighth.

“I was leading in the first stint but we wanted to save some fuel so we worked with Conor to run second. When the last yellow came out, we fell a bit short and it didn’t go our way.

“Lady Luck wasn’t on my side today but there are many more races this season and many more Indianapolis 500s in my future.”

Team owner Carpenter also left the track pondering what might have been, fighting back to finish in the top five after finger trouble with his car at the first pitstop.

“On my first stop, I made a rookie mistake of stalling the car so we dug ourselves a hole,” the 40-year-old three-time Indy polesitter explained.

“The #20 SONAX Chevrolet boys kicked ass today in the pits and with the strategy. This one is all them.

“The car was good, but it was tough deep in the pack. It was great to be able to get back to the fight at the end and get a top five. From how it was looking earlier in the day, to take home a top five isn’t a bad day.

“It does still hurt losing this race and watching someone else celebrate. [But] I am happy for Helio; he is even older than me so it gives me hope still that I will keep coming back and chasing this thing.”

Starting second on the grid, Razgatlioglu first attempted to pass polesitter Rinaldi at Turn 4 on the opening lap, only to run...