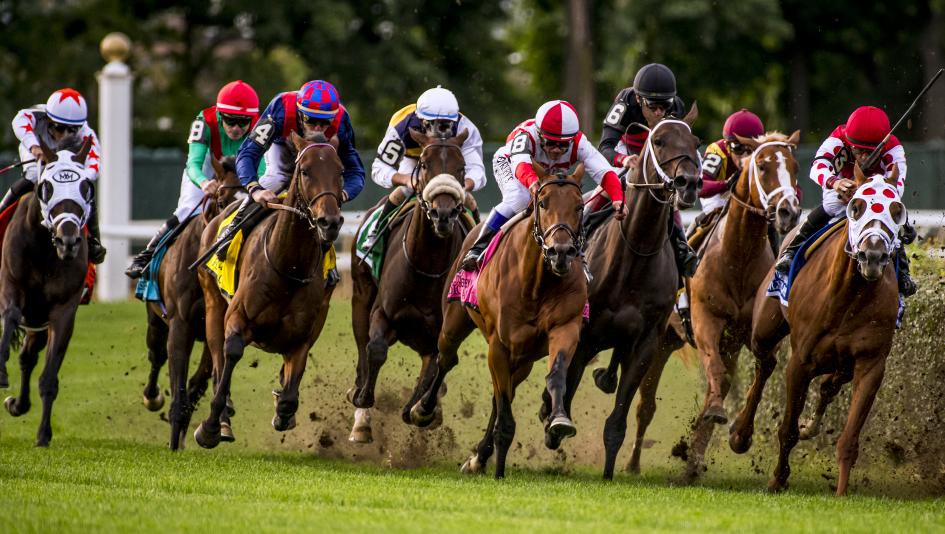 The Grade 2, $200,000 Pennine Ridge Stakes drew a field of nine 3-year-olds, among which are five horses who have won or placed in stakes races during their short careers to date.

Leading the field in terms of accomplishments is Hard Love, recent winner of the non-graded Woodhaven Stakes at Aqueduct. Step Dancer won the similar Awad Stakes last fall at Belmont Park and is making his third start following a five-month layoff, having missed winning by a neck and a nose in his most recent race. Sainthood finished fast for second in the Grade 3 Jeff Ruby Steaks on an all-weather surface in March before an 11th-place finish in the Kentucky Derby Presented by Woodford Reserve. He will try to transfer his all-weather form to the grass, which he’s trying for the first time in the Pennine Ridge. Similarly, The Reds tries turf for the first time after missing by a head last month in the Federico Tesio Stakes at the distance of the Pennine Ridge but on dirt, then being moved up to first when the original winner was disqualified for interference. Public Sector finished second in the Grade 2 Pilgrim Stakes on the Belmont Park turf course last October and, most recently, returned from a six-month layoff to finish second in an allowance race. Safe Conduct won that allowance race on this inner turf course last month and runs in a stakes race for the first time. Shaftesbury earned his first win last month on the turf at Belmont in his fifth lifetime start after three straight runner-up finishes and is running in a stakes for the first time. Shawdyshawdyshawdy and Minuteman both appear overmatched as the former finished a well-beaten sixth in the Woodhaven and as the latter is still a maiden in search of his first win.

We’re still in the first half of the year and, particularly on turf, that means 3-year-olds can make the transition from maiden to stakes successfully. That’s exactly what I think Shaftesbury can do in the Pennine Ridge. After debuting in a turf sprint in December, Shaftesbury finished second in three straight routes before winning easily last month. The pattern of improvement from an 84 Equibase Speed Figure to 93 then to 99 suggests he’s ready for this level, and it’s a very good sign that North American leading jockey Irad Ortiz Jr. rides back after being in the saddle for all five career races to date. To put that last race 99 figure into perspective, it is on par with the figure Hard Love earned winning the Woodhaven Stakes one week before Shaftesbury earned his win. Better still, Shaftesbury is bred to be a real rock star on the grass. A STATS Race Lens dam statistics query easily reveals his dam has produced a total of four turf route winners from six foals. The other three besides Shaftesbury have won 13 races between them and one of them was multiple graded stakes winner Lochte, who banked over three-quarters of a million dollars. With a great inside post to save ground and a big late kick, Shaftesbury appears capable of going from maiden winner to stakes winner in this year’s Pennine Ridge Stakes.

Safe Conduct earned the same 99 Equibase Speed Figure winning his most recent race as Shaftesbury and Hard Love, with that win coming in an allowance race on the Belmont turf course earlier this month. After beginning his career on dirt in a sprint, Safe Conduct took to grass like a duck takes to water last summer winning a turf route at Saratoga Race Course in his second career start. Given time off to mature, Safe Conduct returned seven months later to finish second in March before the effort on May 2, which if repeated, gives him every right to run well enough to win.

Public Sector closed from fifth to second in the race won by Safe Conduct earlier this month, earning a career-best 95 speed figure very likely to be improved upon as he makes his second start following six months off. Public Sector won in his career debut in a turf route at Saratoga last summer, no easy task, then finished second in the Pilgrim Stakes in October before a poor 12th-place finish in the Breeders’ Cup Juvenile Turf presented by Coolmore America. Maturing nicely over the winter, Public Sector returned off the long layoff and could leapfrog over Safe Conduct as he is making his second start off the layoff, which was what Safe Conduct was doing when he was victorious May 2.

There’s no denying Hard Love deserves respect off his win in the Woodhaven Stakes last month with a 99 Equibase Speed Figure but the fact that he has been off for five months makes it difficult to consider him as a contender in the Pennine Ridge. Similarly, Step Dancer makes his third start off a layoff and improved from an eighth-place effort in the Cutler Bay Stakes in March to miss by a nose and a neck on the wire in a highly rated allowance race last month, which also earned him a 99 figure.

Here4dBesthttp://here4dbest.com
Previous articleThe best of Chevy’s 800 NASCAR Cup wins? ‘The next one’
Next articleSkydiver Left Dangling 30ft Above Street After Getting Tangled In Power Lines