Though Wolff told Channel 4 immediately afterwards that he felt “pole should be for qualifying and not for the sprint races”, he later said the sprint was “a good add-on”.

However, he also feels it shouldn’t be a regular fixture to a race weekend as it created “too much randomness”.

“I think it’s entertaining for the crowds on the track,” said Wolff.

“A start is always interesting and good content. And obviously, [Fernando] Alonso was fun to watch. So I think overall, it is a good add-on.

“I don’t see it at every race. I think there’s too much randomness.

“If you see Checo [Perez[ spinning out and then retiring, last is not the place that Sergio Perez should be, and therefore for him, obviously, it could really work against you if you’re one of the frontrunners.

“So there’s too much randomness, but I think if the next few ones go like this one, I think it has a place in the calendar in a limited form.” 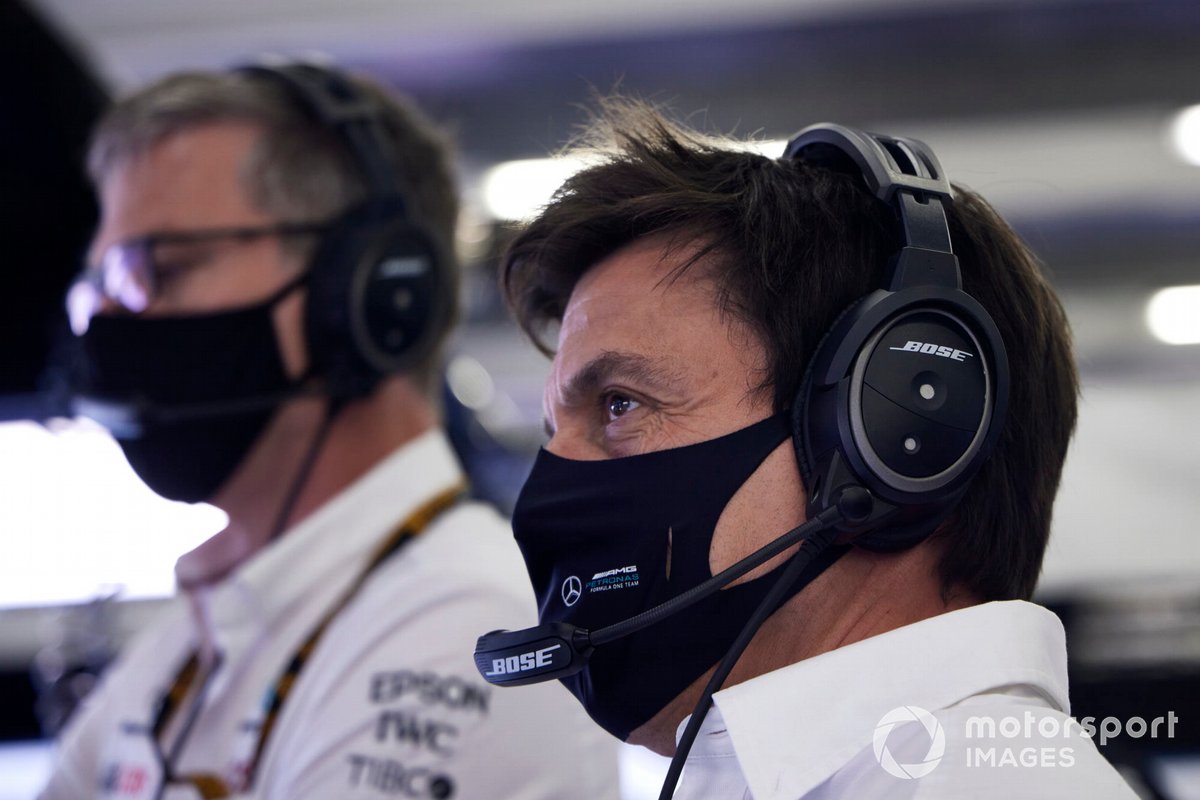 He added: “I’m not a fan of live experimenting. But this one is not hugely controversial. I am totally against reverse grids. It’s just fake.

“But here, everybody started from the right positions.

“I believe that qualifying was yesterday [Friday] and also qualifying should be called qualifying, and not the sprint race.

“But this is really a detail. I believe that it was a bit dull towards the end. But until then I would say it has merit.

“I think if it is a kind of Grand Slam for a couple or a few races, I think that is good, because you provide some real entertainment on the Saturday.

“We are prime time TV Friday night, we are primetime TV Saturday night, and obviously the [we have the] grand prix [on Sunday].

“I agree that the Saturday morning FP2 is a bit random.

“But you need to have a session where you’re long running and because you don’t know the fuels, fuel weight, so the results are actually irrelevant. Only the team knows.

“So I think we can tweak on the format a little bit. But fundamentally, I think if we do five races like this, I’m pro. Maybe four is the right amount, not five.”

Wolff also doesn’t feel the sprint potentially spoiled Sunday’s main event by revealing that winner Verstappen and Red Bull have a stronger race package than Hamilton and Mercedes – even if Hamilton admitted on Saturday there was “nothing I could do” to beat the Dutchman.

Here4dBesthttp://here4dbest.com
Previous articleRaleigh, NC-based insightsoftware, which makes financial reporting and budgeting software, receives ~$1B investment from PE firm Hg at a valuation of $4B (Zachery Eanes/Raleigh News & Observer)
Next articleThe 15 Best Colors to Wear for Your Skin Tone

The 24 Best Yellow-Lens Sunglasses in Every Style