Big mountain skier, film star, and ACMG guide Christina Lustenberger has been staring up at the East Face of Mount Nelson since she was a kid skiing at Panorama Mountain Resort in Invermere, B.C. It’s been a hell of a year, and skiing wasn’t on the top of everyone’s minds. But for athletes in the field, whose livelihoods depend on skiing big, bold lines, getting out and filming remained a vital part of winter. And a lucky few, like Lustenberger, have access to dream lines right in their own back yard. So while many of us skied a few days of pow or hit a couple park laps, Lustenberger and her slew of partners ticked dream line after dream line in glorious alpine style.

We caught up with Lustenberger this week to get a recap of her incredibly successful season, ticking off and filming first descents while staying close to home.

I tried to do my part and carry on with what I could to keep some sort of normalcy in my winter. I think I’m fortunate to live in British Columbia , this area provides so much opportunity without having to travel far.

Funny enough, last season was probably one of my most enjoyable and rewarding winters. I really enjoyed skiing close to home and exploring the mountains in the interior.

It seems like you had a wild season ticking backcountry lines near Rogers Pass this winter. Off the bat, can you tell me about your line down Bagheera north?

The thing about Bagheera is not only are the ski lines on the North Face committing, climbing the South Face is a huge undertaking. So ideal conditions are paramount. This was with my Revelstoke ski partners Andrew Mcnab and Mark Hartley.

We climbed the 1000 meter South Face in melt-freeze with ideal temps on the solar aspect. Once we reached the top we scoped the line. There was a pretty big cornice at the entrance of the line so we built an anchor back from the lip and belayed Hartly out to build a rappel anchor and chop out some of the cornice.

Looking down the line you could only see the top quarter of the couloir. We couldn’t quite make out the mandatory exit but with all the gear, ideal conditions, and an epic crew we rappelled into the line committed to figuring it out.

With a 15 meter rappel to enter the line we were able to stomp out a platform and transition to ski/snowboard above the narrow, 55 degree chute. We leapfrogged the couloir skiing nice, dry snow over exposure. At the bottom of the couloir is a big cliff, so we traversed skiers right over to a exit couloir we thought would go—from our photo of the North Face the exit wasn’t totally obvious. A short 5 meter section of down climbing led to a nice exit ramp out into a bigger bow where we drained our turns to the valley bottom. From there we transitioned to skinning for the long walk back Ursus creek to McGill pass.

It looks like you had some mountaineering cruxes like rapping beneath a pretty fat cornice. What was the trickiest part of that route?

Building the anchors and avoiding the cornice was the crux. The snow was too faceted to build and snow anchor, and the rock took a bit of searching before we could find good gear placements.

You were skiing with a whole host of partners this winter, can you tell me about some of them?

Andrew Mcnab is a local Revelstoke boy. A skimo racer-turned-ski guide, he’s one of my main ski partners. Andrew is super dialed in all aspects of backcountry skiing. I really enjoy my days out with him—we have more projects in line for next season, too.

Ian McIntosh is a childhood friend and TNF teammate. We both grew up in Invermere. Ian is so confident in the big mountains. It’s really amazing to get out in big terrain with him.

Mark Hartley’s one of the best splitboarders in the world and you’ve never heard of him. He’s the quiet shredder that could make most pro snowboarders humble. Mark has been exploring the mountains around Revelstoke for so long—his local knowledge is vast.

I met Nick McNutt filming for TGR. He’s also a TNF teammate and was on Dunkirk with us. He’s such a versatile skier.

There is a huge crew of amazing skiers and backcountry partners in Revelstoke. I feel fortunate to live in such a community.

Tell me a bit about “One and Dun,” your line down Mount Dunkirk.

Ian, Nick, and I arrived at Mica Heli at the tail end of a long high pressure. We were filming with TGR. The first big peak you see when you arrive is Mount Dunkirk, it only made sense to tee it up for a ski. The South Face had never been skied. It was really fun to shred it with the boys and have the lodge staff scoping from the lodge deck. It’s such a beautiful line!

How did filming work with the main TGR crew stuck in the US?

We had communication with the crew and producers at TGR, but this season we worked with Canadian filmiers.
I pitched the Mount Nelson idea to TGR and they loved it. Ian and I coordinated our schedule with the dates we thought we’d have best success on the line.

Mount Nelson is a huge ascent, it’s also an East Face that gets first light and we wanted to ski it in cold dry snow. The snowpack in the Purcells can be super tricky mid winter as it’s a dryer range and very close to and influenced by the climate in the Rockies.

We’ve been curious about that descent, you said online it was a childhood dream to ski Mount Nelson.

We arrived in Invermere late February with one goal. Ski Mount Nelson.

Nelson is an iconic peak that sits above the Columbia valley and the town of Invermere, a peak Ian McIntosh and I have looked up at our whole lives—a childhood dream. You can actually see the beautiful East Face right from Panorama Resort.

So on our first day there we met up with filmer Josh Lavigne and my dad to ski around Panorama scoping the line with a camera and binoculars. Relived to see it was at least filled in enough to ski, we continued on with our recon. Later that day we organized a fixed-wing plane to fly us over the peak. Our objective was to scope the approach, the south face, and the conditions of the east face. The flight went well and all looked good. To give our crew a bit of a warm up we set out for a near by objective to test the snow and give the crew a bit of working time together.

Our film crew arrived and would get dropped by a helicopter on an adjacent peak to film. We would also have Josh Lavigne and Andrew Gallant join us for the ascent to the summit and return back down the climbing route.

The day of, I left my parents house at 1am. The 4 of us started skinning just before 2am. We caught the sunrise as we were climbing the South Face and 1200 meters later we arrived on the summit of Mount Nelson—at 3313 meters.

The film crew was in place and we hustled to transition to ski mode on the summit. The day was supposed to warm up quickly and we wanted to make good timing while the snow was still cold.

We dropped in around 9am and skied the line in pretty amazing conditions and good style. I couldn’t have asked for a better partner than Ian.

This line was pretty crazy as it is front and center from Invermere and Panorama. Ski patrol was listening to our radio communication and watching from the resort. Ian’s dad was up on the slopes watching, too.

Later that day Ian and I went to the ski shop at the base of Panorama to meet up with our parents and friends. The community was already buzzing from the news and the word of Mount Nelson being skied was spreading fast.

Later that week it was on the front page of the local newspaper.

I think the thing about this line that is so special to Ian and me is that it was a childhood dream. Something that is so deeply rooted in your unobstructed imagination. It was something that we both thought about for so many years. But for one reason or another it kept passing us by.

This year with limited travel it seemed logical to put the energy into this line. Something so authentic to both Ian’s and my ski career.

I’m so proud of that day and lucky to have done it with such a good friend and partner in Ian. 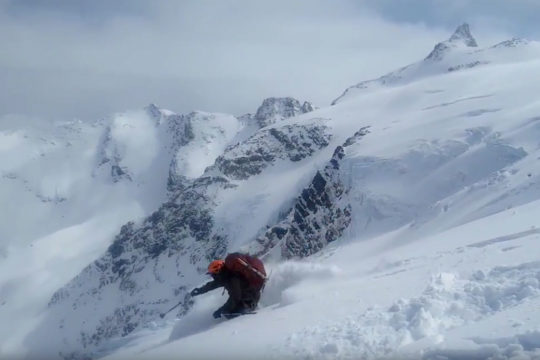 The Grizzly Bear rightfully receives a tremendous amount of respect. These bears can weigh well over 1,000 pounds. They also have a reputation...

A Wyoming-based company called WhatVest produces cargo vests for skiing and snowboarding. These vests are designed to be worn over your shell or...