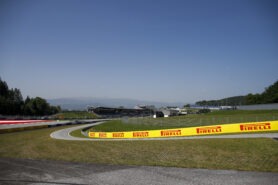 View on the circuit from turn 11

Carlos Sainz was the first to enter the Red Bull Ring to start the first practice for the Styrian Formula 1 Grand Prix. He drove away and came on the radio right away to tell his team his accelerator pedal got stuck.

Robert Kubica was driving the car of Kimi Raikkonen this session. The Polish driver spun the Alfa Romeo right away in turn 3 on cold hard tyres.

After 10 minutes both title rivals Max Verstappen and Lewis Hamilton topped the timesheet. The Red Bull driver was on top with a 1:06.936. Hamilton was only 0.120 slower in the Mercedes, both used the medium tyres.

20 minutes into the session the four Honda engines were occupying the top four spots on the leaderboard. Surprisingly Valtteri Bottas was last on the timesheet. The Mercedes driver did drove 12 laps on the medium tyres but only was lapping the track at only 1:09.386. Almost 3 sec. slower than Verstappen at that moment.

After 23 minutes Sainz spun the Ferrari at turn 9 and blocked the pitlane entry. Bottas had to wait for the Spanish driver to drive away before he could enter the pits to get a set of soft tyres.

On that soft tyres Bottas was a lot faster and climbed to the top of the leaderboard, but not for long, because the Verstappen and Gasly didn’t used the softest tyre yet to lap the shortest lap (in lap time) on the calendar.

Fernando Alonso also was quick in the Alpine and clocked the 6th fastest lap time, only 0.609s slower than Verstappen.

Here4dBesthttp://here4dbest.com
Previous articlePoll: Mario Golf: Super Rush Is Out Today On Switch, Are You Getting It?
Next article“FIA has done the right thing” in F1 pitstop clampdown