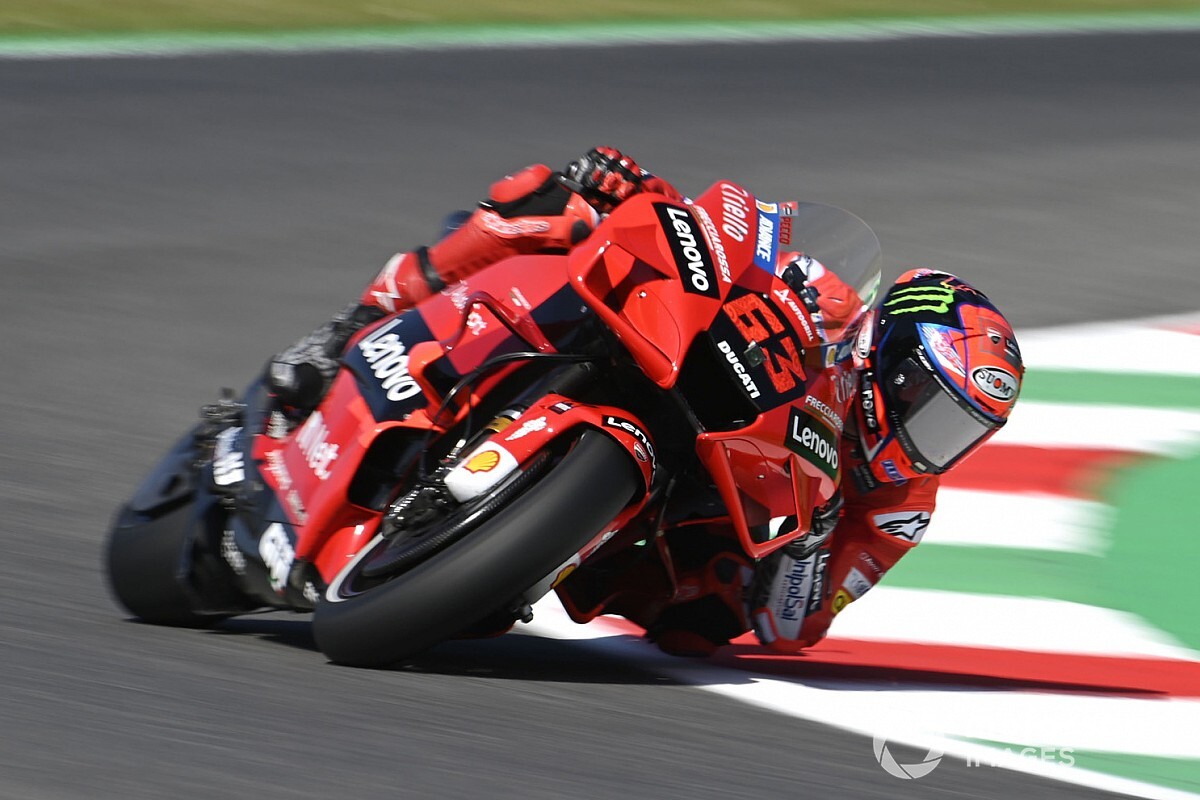 KTM’s Miguel Oliveira set the early pace at the start of FP2 with a 1m47.185s before setting the best lap of the day at that point with a 1m46.584s to go top of the combined times.

After a tough start to the 2021 campaign, KTM has come to Mugello armed with a new chassis for its factory riders first tested at the post-race Jerez test.

Oliveira’s advantage at the head of the individual FP2 timesheet was cut to 0.064 seconds by Ducati’s Bagnaia, though major lap time improvements were few and far between for much of the session as the field focused on race running.

As the session entered its closing stages the timing screen began to light up, though heavy traffic forced the likes of Fabio Quartararo, Vinales and Joan Mir to abort laps.

Rins had no such problems with just over a minute remaining to go fastest of all with a 1m46.218s, though he wouldn’t hold top spot for long.

A late improvement for Bagnaia on the factory Ducati of 1m46.147s shot him up the order to end the day fastest ahead of Rins.

Franco Morbidelli – despite riding a Petronas SRT M1 almost 20km/h down on power on the straight – leaped up to third at the end with a 1m46.331s, pushing Quartararo down to fourth.

KTM’s upturn in form carried over into the latter stages of FP2, with Brad Binder improving to fifth at the end ahead of teammate Oliveira.

Takaaki Nakagami was the top Honda runner in seventh on his LCR machine, with Aleix Espargaro eighth on the Aprilia ahead of Ducati pair Jack Miller and Pramac’s Johann Zarco.

Mir ended up 0.7s off the pace down in 11th ahead of the works Honda pair of Marc Marquez and Pol Espargaro.

A late mistake at the fast Turn 9 right-hander at Arrabbiata 2 for Vinales meant he couldn’t improve on 17th in the standings in FP2.

However, his 1m46.593s from FP1 was good enough to keep him eighth on the combined times and occupying a provisional Q2 spot moving into Saturday.

Valentino Rossi’s homecoming has so far been a miserable affair, the SRT rider running off at San Donato on two occasions in FP2 on his way to 21st and 1.5s off the pace.

Only Tech 3’s Iker Lecuona was slower than Rossi after Friday’s running.

The Supercars powerhouse will sport the unique colours in the Top End as part of its support of the Racing Together programme....

AMC: 6 Tips For 'Apes' From A Former Retail Activist

Secret gag orders imposed by the US government on tech companies must stop, as they abuse citizens' fundamental freedoms and are no longer even...