Fred, Grace and Henri. Where’s Ida? Grace Forecast to be a Hurricane. Fred Back on Land. Henri Forms in the Atlantic Forecast to Loop Away.

Fred, Grace and Henri. Where’s Ida? Grace Forecast to be a Hurricane. Fred Back on Land. Henri Forms in the Atlantic Forecast to Loop Away. 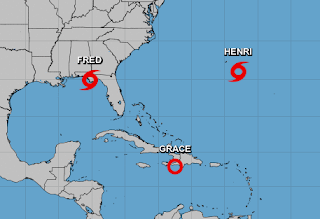 We now have Henri added to our pack of named storms we are monitoring. Fred made landfall at Cape San Blas along the Florida Panhandle, a beautiful beach that juts out into the Gulf of Mexico daring tropical systems to hit it and luckily this was a Tropical Storm not a Cat 3 Hurricane. Wind damage seems to have been light, but minor flooding that happens everytime a system comes through happened on the regular roads. A good “dress rehearsal” for many storm chasers in the area who took to the road and sent back good video. I inclued an image in the previous blog from iCyclone who is living in the summers these days just a bit East so logically he went as did others. Fred was close to attaining hurricane strength but made landfall at 65 MPH which is a photographic day at the beach. 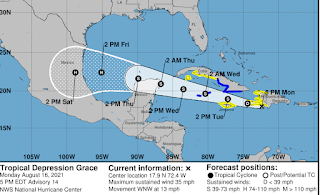 Grace is dumping huge amounts of rain on Haiti and was possibly a Tropical Storm just before landfall, as per NHC discussion yet there was no confirmation and they kept it at tropical depression. The heartbreaking torrential rain in an area where people are still looking for survivors is not hype but reality and reality bites sometimes in Haiti. Jamaica is in the bottom of the Cone the NHC put out as it travels on towards the Yucatan possibly missing most of Cuba. Grace, unlike Fred, seems to want to avoid land interaction. There is dry air in her track that will keep her intensity in check despite the warm water there to greet Grace. 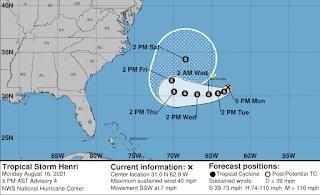 Henri is now a Tropical Storm.

A looping storm as per this forecast.

There’s the image of the 3 named storms.

I will add some models intensify Grace.

There’s always a model that sees a Major Hurricane.

The NHC is keeping their expectations low currently.

Grace expecgted to be a hurricane.

Time will tell how strong. 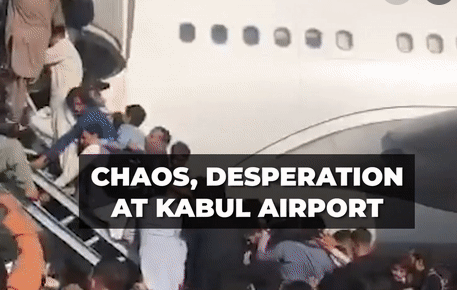 Times of India watches this seriously.

It’s in their neck of the woods.

This has been a fast news cycle and every time you turn around it seems as if there is a fire to put out somewhere be it a 7.2 Earthquake in Haiti or the runways overun in Afghanistan as people try to flee

and run for their lives.  Spain had the hottest day in history and my brother sent me videos of flooding rain in Japan and there’s a heavy monsoon season in the SouthWest. Apparently the sun is coming to life again with storms that many feel influence our weather (I’d like to argue that but a well known forecaster told me it’s possible) so it will be interesting to see what comes next. The MJO is supposedly on it’s way into our basin and later in the hurricane season we are forecast to have a La Nina.

2021 may not be about quality in the beginning, as storm after storm gets a name and it’s moment in fame but later in the season we will go deep into Fall as fronts move across the SE and it will be all about timing as to whether a front grabs a hurricane and flings it away or sucks it in towards land.

Stay tuned. Prepare for the real dangerous storms of 2021 and take this time to make sure you have a plan and a back up plan depending on if it’s a Category 1 hurricane or a Category 4 because size and intensity changes everything.

I’ve always been curious on the name Ida personally. Where is Ida? Pretty sure some of those names coming up are going to be weird, difficult and probably anything goes.

Here4dBesthttp://here4dbest.com
Previous articleWhy fintechs are buying up legacy financial services companies – TechCrunch
Next articleCooling consumerism could save the climate | Letters

Subtropical Storm Teresa Joins Hurricane Sam in the Atlantic Basin. Sam Still Far Away and Much Can Change. Stay Tuned.

So that happened today! Subtropical Teresa formed rather suddenly and is forecast to be short lived. The NHC forecast is for a quickie...

Hurricane Sam. Westbound 15 MPH … Can Intensify Fast & Collapse as Fast. Some Dry Air Out There … MDR Unusually Dry in Late...

Sam, still far out from the Islands.Moving slowly 15 MPH West.Hurricane Sam that is this morning. 75 MPH.Models currently, mostly, curve him up...