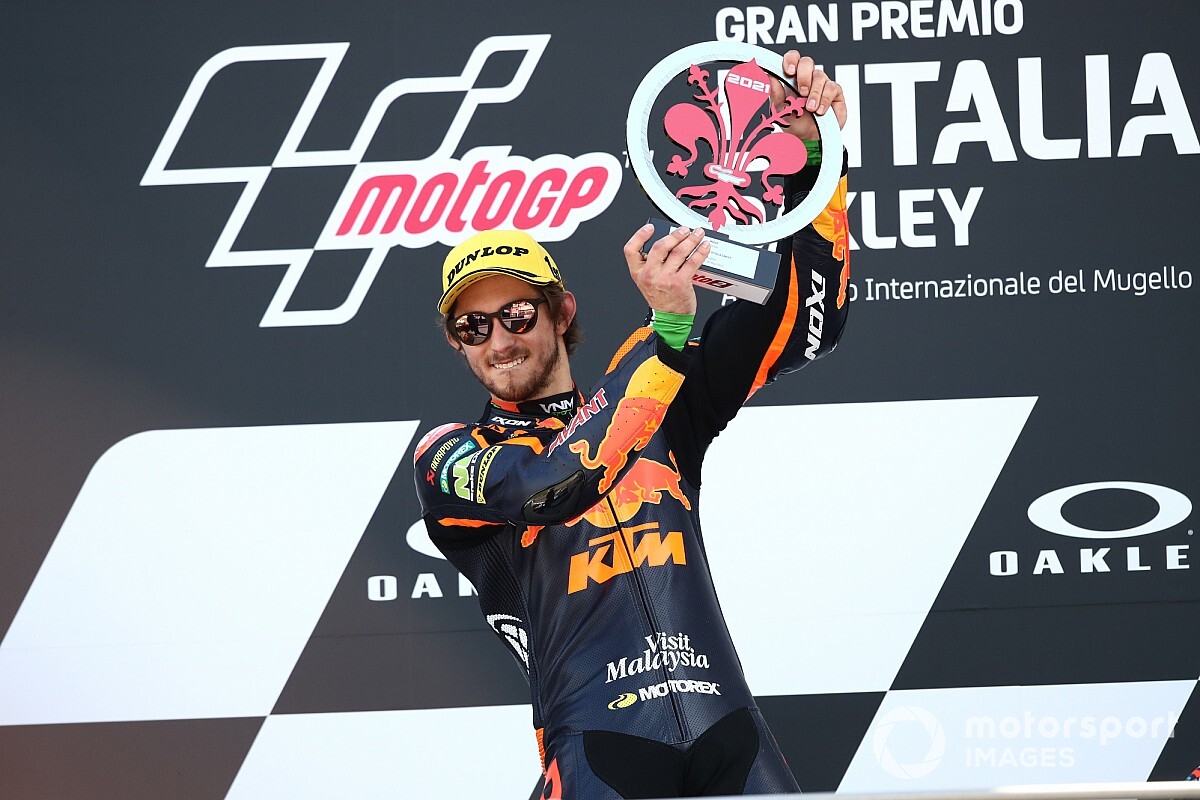 The sixth round of the 2021 Moto2 world championship was marred by the announcement ahead of the race that 19-year-old Moto3 rider Jason Dupasquier has passed away from injuries sustained in a horror qualifying crash on Saturday.

At the start of the 21-lap race, poleman Fernandez grabbed the holeshot from Ajo KTM teammate Gardner.

Marc VDS rider Sam Lowes quickly worked his way back into third on lap three having started third and began to eat into the half-a-second advantage the top two had on him.

Fernandez soon opened up a gap to Gardner of seven tenths, with Lowes continuing to eat into the Australian’s gap on him.

Lowes had closed the gap sufficiently enough by the start of lap 10 to launch an attack on second into the San Donato right-hander at Turn 1, but ran wide and allowed Gardner back through.

The Marc VDS rider used the transition from the outside line at Turn 1 to the inside of the Luco left-hander at Turn 2 to make a move stick – defending retaliation from Gardner through the Materassi/Borgo San Lorenzo chicane at Turns 4/5.

This tussle allowed Fernandez to open up his lead to two seconds, but his pace began to stall by just over mid-distance and Lowes started to reel him in.

Lowes was able to get his disadvantage to Fernandez down to eight tenths by lap 15, but his hopes of victory were dashed when he fell out of the race at the Arrabbiata 1 right-hander.

The Marc VDS rider’s crash didn’t relent the pressure on Fernandez in the latter stages, with Gardner closing the gap between the Ajo pair to under sixth tenths.

With three laps to go Gardner cut the gap further to under half a second, the Australian seemingly with an edge grip advantage over Fernandez.

Gardner was close enough to his teammate by the end of the lap to get into his slipstream on the run to San Donato at the start of the penultimate tour, but couldn’t quite get near enough to make a move.

Defensive riding from Fernandez across lap 20 ensured Gardner couldn’t use his grip advantage to find a way through.

Fernandez held the lead to start the final lap, but Gardner nailed his run through the Arrabbiata section to launch a successful move for the lead at the Scarperia right.

Fernandez tried to fight back in the slipstream on the run to the chequered flag, but Gardner held away for his first win of the season by 0.014s.

Italtrans rider Joe Roberts took third from VR46’s Marco Bezzecchi after a late battle, but the American was demoted to fourth for narrowly exceeding track limits on the final lap.

Gardner’s victory puts him six points clear of Fernandez at the top of the championship, with Bezzecchi a further 23 points adrift in third as Lowes’ crash puts him 48 adrift on the lead.

The Portuguese has won the Monaco E-Prix, at Interlagos during a Brazilian Stock Car cameo and for JOTA in the LMP2 class...

Perez joined Red Bull on an initial one-year contract for the 2021 season after being drafted in as a replacement for Alexander...

What to Buy From the Latest New Balance x Staud Collection