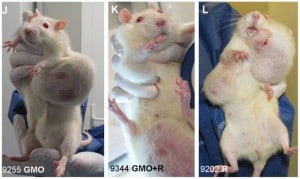 This is the kind of study you can hang your hat on: Definitive proof that GMO corn is seriously harmful to our health. This photo is taken directly from the study and shows the massive tumors that developed in the rats fed genetically-modified corn. Women take note: The pituitary and mammary glands of the female rats were particularly susceptible! Up to 80% of the female rats got massive tumors of the mammary glands, the death rate was 200-300% compared to the controls, and there was extensive damage to organs. You can download the study here.

This is very timely considering California (bless them) is spearheading the movement for the rest of the USA and Canada to get GMO foods labelled. Not banned mind you, just labelled, so that we can make a CHOICE about what we buy and ingest – and they are having the fight of their lives as the big agricultural (and pharmaceutical, as the owners are usually the same) call in every favor they have and grease as many palms as they can ($39 million to date – to stop the labelling of GMO foods!). Please go here for details on how you can support Proposition 37 to get GMO foods labelled (you don’t need to live in Cali to help out).

So, two things come immediately to my mind: Firstly, I like to have a bowl of Barbara’s natural cheesies or some Popcorn Twists (made by Old Dutch foods here in Canada) as a snack from time to time… Now, Barbara’s used to be organic, but then I believe they got bought out and the organic line has disappeared. So who owns them now, and are they using GMO corn?

Well, turns out Barbara’s Bakery is now owned by Weetabix and when I phoned them, they said they are working with The Non-GMO Project to eventually convert to non-GMO corn, but currently, yes, their products “likely contain some percentage of GMO corn”. Rats! I mean, darn it. So Barbara’s products are out until I see a NON-GMO label on their package.

Not to be critical, but when I checked out the Non-GMO Project site, Barbara’s would be able to immediately become certified non-GMO with them and they also have a list of companies whose products are currently being tested… so, what’s the delay?

Most likely there isn’t a sufficient supply of non-GMO corn in the USA to supply Barbara’s Bakery products! Which brings me to another point: Why are all the food manufacturers leaving this GMO fight to the consumers? Don’t companies like Barbara’s realize that if THEY don’t demand non-GMO corn from their raw suppliers, that by the time the consumer mobilizes, it will be too late? Where’s Barbara’s going to get its  non-GMO corn from now… Europe? That will be financially viable. Not.

When I called Old Dutch foods here in Canada, the fellow actually laughed and said, “What??” He didn’t know what I was talking about and had never heard of GMO foods…. I’m still speechless. Uh, hopefully that’s a good sign…

The next thing I thought of after seeing this study was: I am SO glad I switched the maltodextrin in Absorb Plus from corn to tapioca. And believe me, whilst I got emails from people thanking me for looking out for their health, I also got emails from people complaining about the switch and asking if they could still get the corn-based maltodextrin. Even after I explained that it was not possible to get Certified Non-GMO corn in North America anymore – at least for a small manufacturer. I’m glad I now have one more piece of evidence to show people why they should just get used to the mild taste difference and enjoy the tapioca maltodextrin in Absorb Plus!

I know in the retail sector it’s considered death to a brand if you change the taste of a product that people like and has a loyal following. But I hope my readers understand by now that I have ONE priority and that is HEALTH. Of course, taste and texture are important. Especially when it comes to kids. But if I can hugely improve the health of a product and only minimally effect the taste, then I’m going for it! Also, I taste-test everything on a bunch of kids first (who are way pickier than adults) so people who buy products that are formulated by me need to understand that I will continually improve these products as new research comes to light, or as the food supply degrades (as in GMO corn).

I challenge you to root out the sources of GMO foods in your cupboard. Until GMO labeling is mandatory, unless it is Organic, you can pretty much assume if it contains corn, soy, beets, or papaya, it’s genetically-modified. GMO experiments with all kinds of crops from potatoes, to rice, to cotton, etc. are ongoing thought, which is why we need LABELING!

For now, be sure and download this Non-GMO Shopping Guide, which tells you how to shop and what to buy to avoid GMO foods and additives.

And don’t forget Proposition 37 to get foods GMO labelled – lots more info about this and how to get involved (along with great videos) on Dr. Joe Mercola’s site.

In the meantime, check out this short vid that really hits on all the key points: