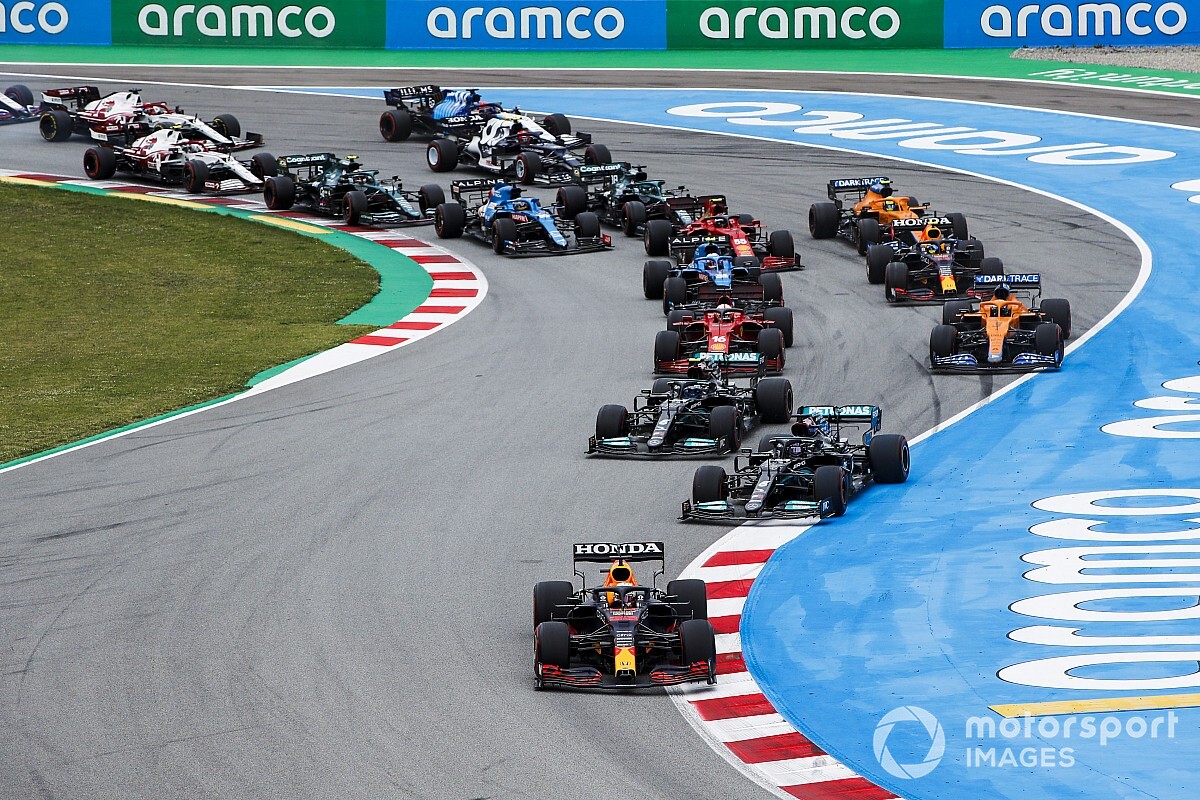 Hamilton lost his lead at the start, when Red Bull’s Max Verstappen pulled a bold first-corner move on him. But Hamilton’s race strategy proved superior when he took an early second pitstop, and chased down Verstappen in the closing stages – easily passing him to take victory.

The second Mercedes of Valtteri Bottas was a distant third, his main moment in the race coming as he briefly held up Hamilton while his teammate was chasing down Verstappen.

How the Spanish Grand Prix unfolded

From pole position Hamilton led the charge to Turn 1, where Verstappen dived down his inside and grabbed the lead, easing Lewis wide on the corner exit. Ferrari’s Charles Leclerc passed Bottas around the outside of Turn 3 for third, with Daniel Ricciardo (McLaren), Sergio Perez (Red Bull), Esteban Ocon (Alpine) and Carlos Sainz (Ferrari) next up.

Verstappen quickly pulled out of DRS range to Hamilton, as Bottas toiled to find a way past Leclerc. The race was neutralized with a safety car on Lap 8 when the engine of Yuki Tsunoda’s AlphaTauri cut-out at Turn 10.

Hamilton was unable to get a run on Verstappen at the restart, while Lance Stroll moved his Aston Martin past Fernando Alonso’s Alpine at Turn 5 for tenth place.

Hamilton set fastest lap to get into DRS range of Verstappen at one-third distance, as the pitstop cycle approached. Bottas was the first of the top five to pit, with Verstappen stopping a lap later – as Hamilton, having got to within half a second of the leader, stayed out.

Verstappen suffered a slow stop, with both left-side tyres being slow to emerge from the garage due to his late call, losing him 2s to Hamilton. However, Hamilton then lost time while lapping the Haas of Nikita Mazepin – which negated his virtual lead over Verstappen. Bottas’s early stop undercut Leclerc for third place.

Hamilton ran several laps longer on the soft tyres he started on, and although he rejoined well behind, his new mediums were four laps fresher. Hamilton slashed the gap to Verstappen and was right on his tail again just after half distance, and despite getting into his DRS range, wasn’t able to get close enough to make a move.

Mercedes opted to pit Hamilton again on Lap 43, which proved crucial to his win. Verstappen stayed out, holding a 23s lead at that point as Red Bull put its strategy on Hamilton not repeating his charge to victory in the 2019 Hungarian GP in similar circumstances.

During Hamilton’s chase, Bottas held up him for half a lap, losing him valuable laptime to Verstappen, and Bottas then pitted anyway for soft tyres. That meant he had to repass Leclerc with eight laps remaining.

With ten laps to go, Hamilton got the gap down to Verstappen under 7s, and was lapping almost 2s per lap faster. Hamilton got into DRS range on Lap 59 and passed him at the first attempt at Turn 1 a lap later.

Verstappen then pitted for fresh softs in a successful bid to take fastest lap – albeit 22s behind Hamilton at that point. Verstappen finished 15s in arrears, with Bottas 10s further back and Leclerc in fourth.

Perez pulled a superb around-the-outside move on Ricciardo at Turn 1 to take fifth. Later on, Ricciardo and Sainz both passed Ocon in the final stint to claim sixth and seventh respectively. Norris also passed the fading Ocon for eighth.

The battle for the final point was intense, as Stroll and Alonso clashed at Turn 1 – with Stroll finally making a move stick there with four laps to go. AlphaTauri’s Pierre Gasly then passed Stroll to snatch the point, this despite a 5s penalty for lining up ahead of his grid spot.

Here4dBesthttp://here4dbest.com
Previous articleVerstappen felt like “sitting duck” against Hamilton in Spain fight
Next articlePreakness Post Position Draw Moved to May 11