Hamilton was penalised for the controversial incident at Copse, just after which Leclerc had surged into the lead before the race was suspended.

Leclerc led the majority of the restarted race, including while managing an intermittent engine problem, but was unable to resist Hamilton’s late charge back to the front following his lengthy pitstop, where he had served his 10-second penalty.

Unlike in the sprint race, Hamilton made the better getaway at the first start and was alongside polesitter Verstappen as they raced into Abbey, with the Red Bull hanging on around the outside – nearly going into the runoff area – to lead at the race’s first braking point at Village.

The battle continued, the pair running so closely side-by-side they appeared to touch, down the Wellington straight, at the end of which Hamilton surged ahead on the outside, with Verstappen then skating over the inside kerbs to stay in front, even though it took him wide on the exit.

Verstappen’s tighter entry through Luffield meant Hamilton was able to surge into his slipstream on the national pit straight, diving to the inside and very close to the barriers after Verstappen had moved to cover the inside line for Copse.

There, with Hamilton a long way alongside, the pair collided as they ran through the rapid right-hander, with Hamilton’s left-front clipping Verstappen’s right-rear and popping it off the car, which was spun around at high-speed and sent into the barriers on the outside.

Verstappen hit the tyre wall side on, where he gingerly climbed from the wreckage after the race had been red flagged, from an initial safety car intervention.

The Red Bull driver was later taken to a nearby hospital “for further precautionary checks”, per an FIA spokesperson.

Leclerc led at this point after the Ferrari had surged past Hamilton, who had lost speed in the clash with the Red Bull, exiting Copse. 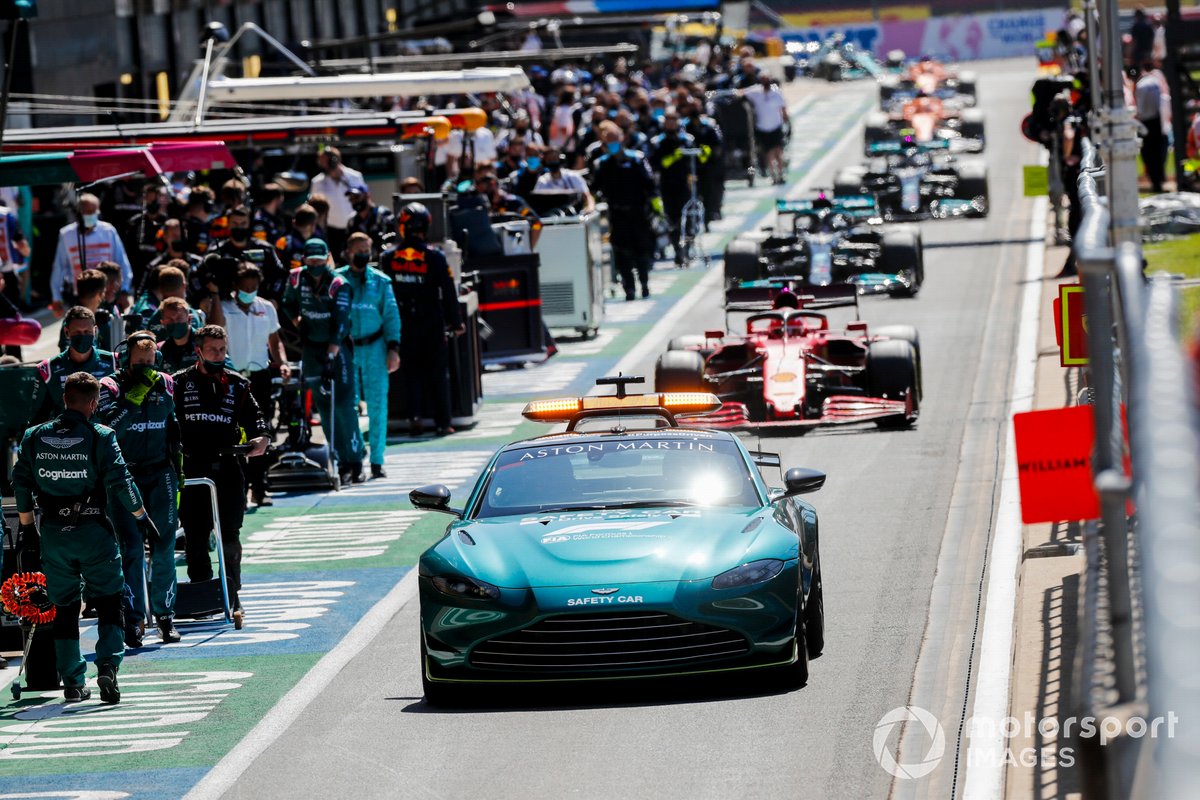 The Safety Car Charles Leclerc, Ferrari SF21, Lewis Hamilton, Mercedes W12, and the rest of the field through the pit lane

The race was suspended for nearly half an hour, during which Red Bull and Mercedes presented their opposing viewpoints to race director Michael Masi, as the stewards investigated the incident.

At the standing restart on the race’s third lap of 52, Leclerc stayed ahead of Hamilton off the line, while Lando Norris passed Bottas in identical fashion to Leclerc at the initial start to run third ahead of the second Mercedes.

Leclerc surged to a 1.2-second lead at the end of the first lap and he kept Hamilton – who had been told to push after being handed a 10s time addition for the incident with Verstappen – at arm’s length for the next phase of the race – where they traded fastest laps in the high 1m32s.

Ferrari informed Leclerc that it was switching him to “Plan B” – a one-stopper with an elongated first stint – as Hamilton struggled to make progress following in the dirty air.

But the world champion was able to close in and run in DRS range approaching lap 20 after Leclerc suffered a series of engine power “cuts”, with Ferrari hurriedly having to tell him to alter the power unit’s settings.

The issue appeared to be rectified (although Leclerc reported the problem on an additional occasion before being told to avoiding upshifting if the cut occurred again) and so the Ferrari driver was able to pull out his advantage again as Hamilton reported blistering on both his front tyres, after he had pushed to try and take advantage of Leclerc’s power struggles.

Leclerc’s pace was so strong that Ferrari kept him out until lap 29, two laps after Hamilton had stopped to switch his medium tyres for hards – and one lap after Carlos Sainz Jr had lost over 10s with a slow left-front change.

But Leclerc had no such problem and started his stint on the hards with a lead of 7.7s over Bottas, which he quickly set about extending. 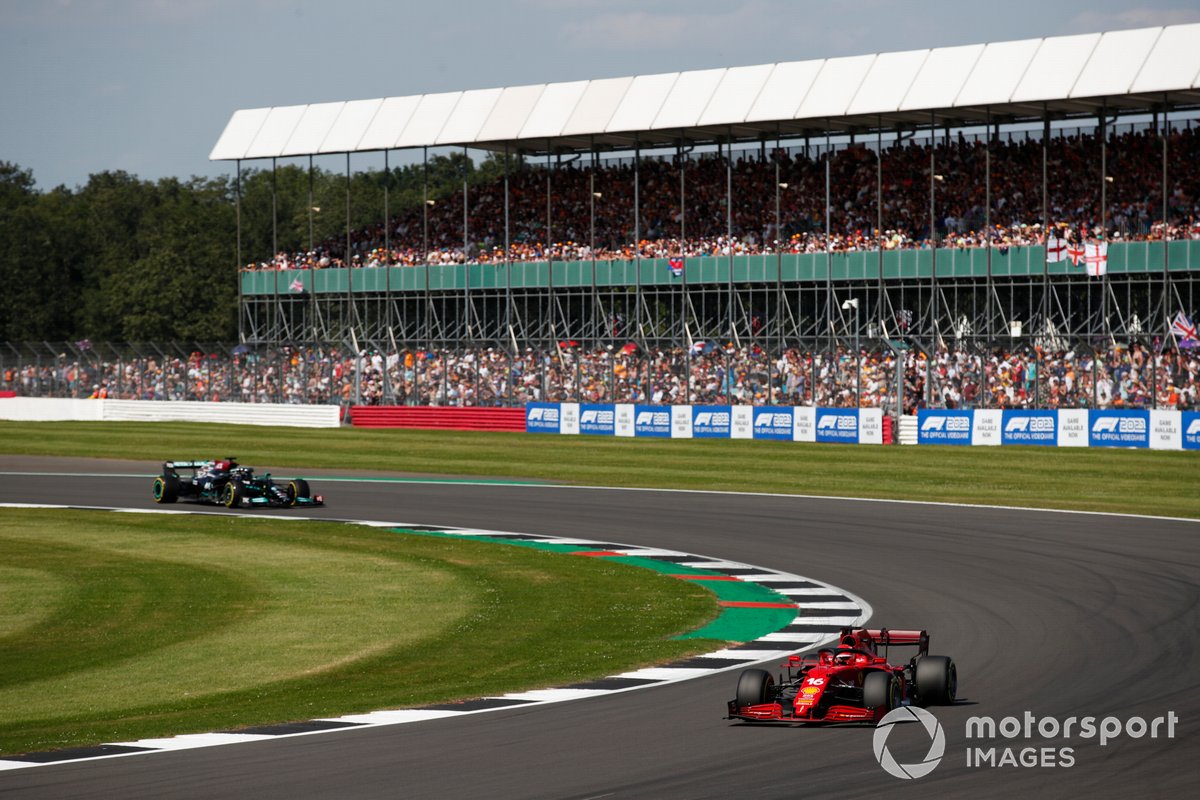 Hamilton ran behind Norris after his long stop – with the McLaren having fallen behind Bottas as a result of his own pitstop delay due to a slow right-rear change that cost him around four seconds.

The Mercedes driver quickly closed in on Norris and passed him on the run to the inside of Copse on lap 31, at the end of which Leclerc led Bottas by nearly 10s and was 13.5s in front of Hamilton.

Over the next 10 laps, as Leclerc managed his pace in the mid 1m31s up front, Hamilton charged up to his team-mate with a series of laps in the mid-high 1m29s, with Mercedes ordering Bottas not to hold the world champion up and then let him by at Stowe on lap 40.

That left Leclerc with a 7.6s lead to defend over the final 12 laps, with Ferrari ordering him to “full push to the end”, as Hamilton continued to eat into his advantage.

The Mercedes driver regularly took up to a second a lap from Leclerc, reaching DRS range with just over three laps remaining – where Leclerc was struggling with lapped traffic.

On lap 50, Hamilton once again looked to the inside at Copse, with Leclerc desperately trying to hang on around the outside.

But the Ferrari driver had to catch a snap of oversteer and went wide over the exit kerbs and runoff, rejoining just behind Hamilton, who surged clear to victory by 3.8s.

Bottas finished 11.1s off the lead in third, with Norris fourth ahead of Daniel Ricciardo, who defied Sainz to the finish.

Fernando Alonso was another driver who suffered a slow pitstop, before which he had briefly battled Bottas when the Mercedes came out of the pits from its only stop, and he eventually came home seventh after passing Lance Stroll following the slow service.

Stroll took eighth ahead of Esteban Ocon in the second Alpine, with Yuki Tsunoda claiming the final point in 10th.

Pierre Gasly had to pit late on with a puncture and finished 11th ahead of George Russell.

Kimi Raikkonen and Sergio Perez clashed late on – an incident that will be investigated after the race.

The Mexican was drafted in to replace Alex Albon for 2021 on initially a one-year deal, after former team Aston Martin triggered...

Jul.30 - Two other Formula 1 engines are "miles ahead" of Ferrari in 2021.That is the admission of Alfa Romeo boss Frederic Vasseur,...