Bukayo Saka was the surprise selection by Gareth Southgate for England’s final group game against Czech Republic. Perhaps the Arsenal teenager had been seen as a utility player, useful to have around but largely here for the experience despite scoring in the warm-up game against Austria. His impressive performance at Wembley has changed all that.

The clamour before kick-off had been for Jack Grealish to start and the Aston Villa captain justified his inclusion in the starting line-up with the assist for the only goal of the game. It was scored by Raheem Sterling. It was made possible by Saka’s driving run in the build-up.

The focus, once the teams had been announced, switched to Jadon Sancho. He was omitted once again despite the enforced absence of Mason Mount as well as Southgate’s decision to leave out Phil Foden given the threat of suspension following his booking against Scotland.

But once the match was under way, it was Saka who starred. The contribution for the goal was no isolated incident, it was emblematic of a performance that belied his age. The 19-year-old winger carried the ball at speed but showed strength and skill to protect it too.

“We have been super impressed with Bukayo throughout the whole month,” said Southgate afterwards when speaking to ITV about Saka’s man-of-the-match display. “We really like him with and without the ball. Tonight, his receiving under pressure was fantastic.”

His defensive work was most evident early in the second half as the opponents searched for an equaliser. Saka was there, helping support Kyle Walker in the right-back position. He was the one who took responsibility, clearing a dangerous cross from the other flank. 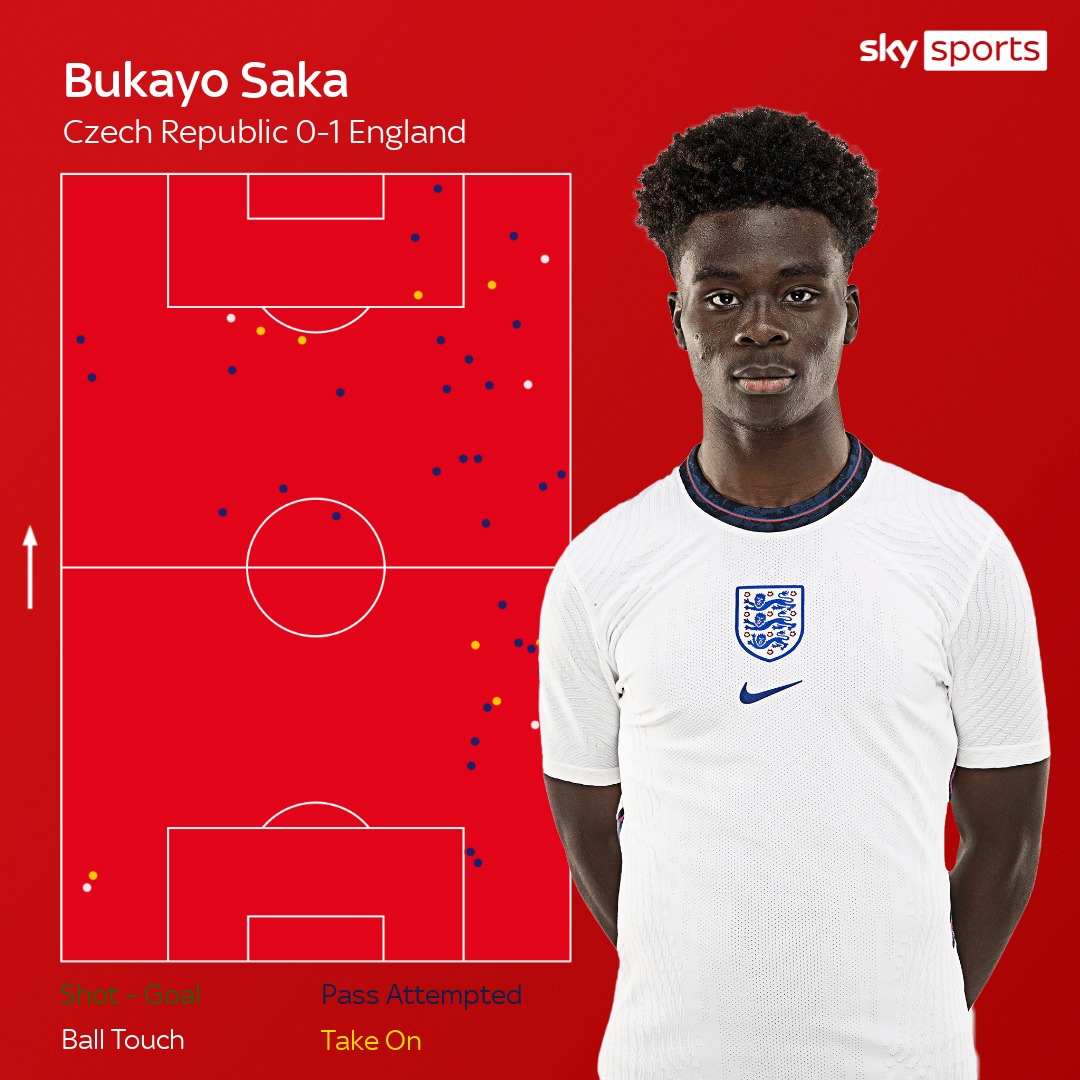 This was a 4-2-3-1 formation that was more adventurous than had been seen by England in their first two games, one that was much needed after the lack of thrust against Scotland. But Southgate, aware of the challenges ahead, clearly remains wary of being too open.

Saka’s presence solves that in a way that perhaps Sancho would not. He has that experience at full-back. He is willing to work back. Positionally savvy, it was the youngster’s inclusion, remarkably, that allowed Grealish to impress and Harry Kane to shine more than before.

Could Saka become England’s problem solver? With Mount unlikely to feature in the next game because of the restrictions placed on him training with his team-mates, Southgate needs someone who can bring balance to the attack as well as quality on the ball.

Saka’s flexibility might be the answer in the knockout stages. Although there will be a temptation to stick to the template from this game next time out, the nature of the opposition is likely to prompt a change of approach – but Saka can adapt to that.

It is easy to see how Walker might tuck inside to form a back three with Saka operating as a right wing-back. Alternatively, the recall of Kieran Trippier could see Saka switch to the left. If it is to be 4-2-3-1 or 4-3-3 again, he can handle greater defensive demands if needed.

Such is tournament life, this strange world where a player whose very inclusion in the line-up had caused consternation prior to kick-off now finds himself taking the post-match media duties as the man of the match. With many concluding he cannot be left out again.
Adam Bate

Raheem Sterling came into these Euros with questions over his form after an in-and-out season at Manchester City and some critics calling for new, younger wide options to take his place. He leaves the group stage with two match-winning goals to his name and a must-pick status for the last-16, whoever England play.

Perhaps in Gareth Southgate’s mind Sterling’s place was never really in doubt. The forward is a tried and trusted leader for the England manager, with 14 goals in his last 19 internationals underlining his importance to this side. It’s a remarkable tally and testament to his improvement as a player, given his slow goal-scoring start on the international stage.

Against Croatia, Scotland, and Czech Republic England have looked at their most dangerous when Sterling is running behind opposition defences through the left channel. There has been a lot of talk about the service into Harry Kane but getting the service right for Sterling could be the key now.

England looked like they had the pattern nailed down in the first half on Tuesday, with Luke Shaw and Jack Grealish combining effectively with Sterling on that side of the pitch and causing Czech Republic repeated problems.

It almost brought a goal inside two minutes when Shaw lofted a pass over the top for Sterling to lob against the far post. Sterling then showed his knack of finishing from within the six-yard box 10 minutes later when he timed his movements perfectly to meet Grealish’s stylish centre.

As England found against Scotland, that space is not always there to be exploited but against stronger opposition in the last 16 there is likely to be room to run into, with Southgate surely plotting ways for his side to punish France, Germany or Portugal on the counter-attack.

It is a worry for England that Sterling’s two goals are the only time they’ve hit the net in the group phase. Kane certainly doesn’t look like he’ll be adding another Golden Boot to his collection at this tournament.

But Sterling has been able to lighten the load on his captain. Southgate has some important decisions to make around whether Shaw and Grealish will be in the starting XI next week or who else will make up the creative unit. But there’s no doubting Sterling’s name will be on that team sheet.
Peter Smith

Steve Clarke’s side revelled in stifling England at Wembley, optimism fuelled that here, on home turf, with this kinder format, they could seize the moment, finally reach a knockout stage.

Billy Gilmour’s coronavirus-enforced absence – what a shame he could not go up against the still-masterful Luka Modric – added the allure of a potential triumph in adversity and when Callum McGregor rifled an equaliser to rock Glasgow – ‘No Scotland, no party!’ roared Hampden – it felt fate might just be on their side.

But for the early, chest-heaving bustle of John McGinn and Andy Robertson, Croatia’s midfield machine knitted patterns around increasingly bewildered blue shirts. Scotland were outclassed where it mattered in the end, Modric delivering the decisive moment with an artistic swipe.

“Croatia are tournament-hardened,” admitted Clarke afterwards but for all the disappointment of coach and players, there was a steeliness too.

“We’ll make sure it’s not 23 years until we go to the next tournament,” he said. “It makes us so hungry for the World Cup,” added McGregor. “We want this to be the start,” said John McGinn.

It can be, for what remains a work in progress, for a youthful crop that includes the likes of Gilmour, Nathan Patterson and David Turnbull. Reaching Euro 2020 after that gut-churning penalty shootout was a major hurdle cleared. The occasion has been one to cherish, even if the damage was done against the Czechs; “We felt the love of a nation,” said captain Andy Robertson as tears flowed again.

It is another familiar tale of what might have been, another night to wonder if it ever will be. But beneath reopened scars, enough evidence to argue it will not be another 23 years.
Kate Burlaga

It took until the 83rd minute for the Czech Republic to have their first shot in the second half at Wembley, promoting some to suggest Jaroslav Silhavy’s side were purposefully trying to finish runners up in Group D so as to ensure an easier passage through the knockouts.

Well, if that was the visitors’ plan, then it backfired when Croatia moved above them into second place in the standings with a 3-1 win over Scotland, meaning they will face the runners up in Group E.

Meanwhile, the Czechs must wait to discover the identity of their last-16 opponent having slipped to third spot in the group, with the daunting prospect of either Netherlands, Belgium or the winners of Group E now awaiting them.
Richard Morgan

Explained: Why Southgate is cautious | Is Grealish now a starter? | Foundations for future Scotland success?

Alice Piper is joined by Rob Dorsett and Pete Smith to discuss England’s 1-0 win over Czech Republic at Wembley to finish top of Group D at Euro 2020. Jack Grealish finally gets a start for England – is he now here to stay? Why IS Gareth Southgate so cautious with the Three Lions? Plus: praise for Bukayo Saka and Raheem Sterling.

The panel also cover all England positions and talking points going into the last 16, and discuss how Southgate will approach the knockout stages.

And after Scotland’s 3-1 defeat by Croatia at Hampden Park, Sky Sports News’ Charles Paterson joins us to look back their campaign, and whether the foundations are in place for more success in the future.

Here4dBesthttp://here4dbest.com
Previous article5 must-have players for the start of the 2021/22 season
Next articleThe 7 Best Hair Dryers for Damaged Hair, Hands Down