How Bottas’ Monaco F1 pitstop ended up being 43 hours long

How Bottas’ Monaco F1 pitstop ended up being 43 hours long


F1 teams regularly churn out stops in around two seconds, so it was quite a shock to find that Mercedes had to wait until the car was back in the factory on Tuesday morning to get the wheel off. That was more than 43 hours after the pitstop began.

So, what went wrong for Mercedes and what’s so special about the equipment that teams are using that enable them to break the two-second barrier?

In fact, it is the way that stops have become so fast that is behind why things went so disastrously wrong for Bottas.

Mercedes has 20 mechanics on hand at this particular stop (below): three for each wheel – one putting the wheel on, one taking the wheel off, one on the wheel gun, one on each jack at the front and rear, one on each spare jack at the front and rear, one either side of the middle of the car to keep it more secure whilst it’s off the ground, one on the hand cranked brake board and a chief observer. 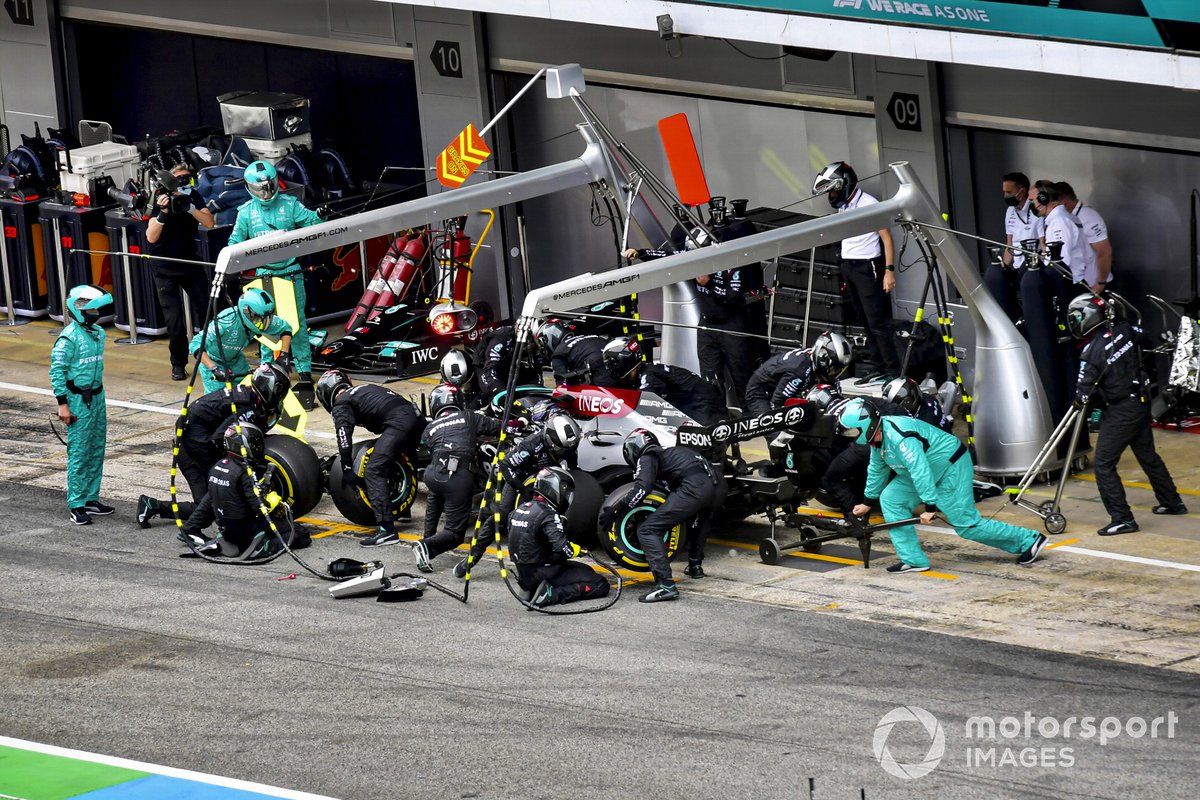 Two more mechanics can be added to that mix if a front wing adjustment also needs to be made (see below), which makes for a lot of moving parts and personnel that have to be at the absolute top of their game, working in perfect harmony to produce their best stop.

The driver is also waiting to have the wheels and tyres changed, along with any front wing adjustments, be dropped off the jacks and to drop the clutch and go.

Before any of that can happen they must slow the car down and hit their marks with absolute precision. If the driver is a few centimetres off, they’ll cost time as the mechanics will have to reposition to compensate. 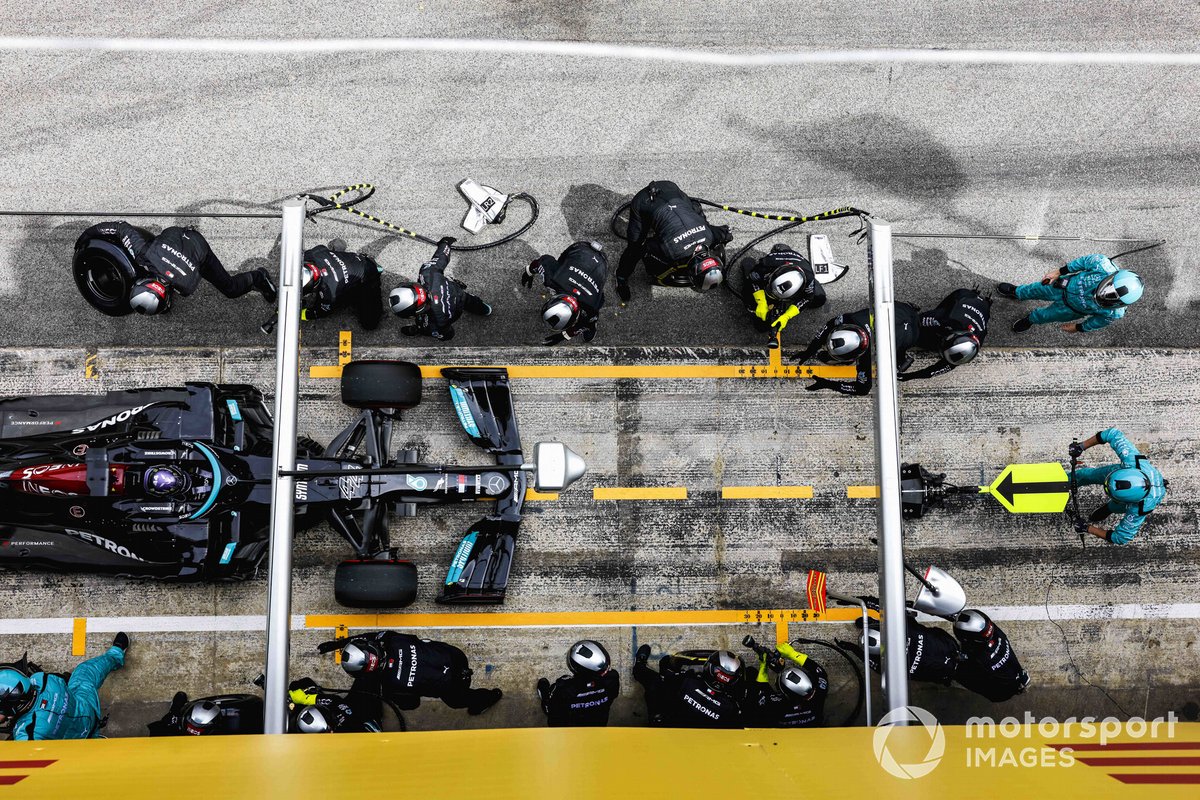 For Mercedes and Bottas, it appears that being slightly out of position was the trigger for the chain of events that led to his demise at Monaco, as the Finn pulled up a little short of his primary marker.

The mechanics moved around to compensate but may have inadvertently overshot, with the wheel-on mechanic on the front right coming in too close with the new wheel, leaving the gun operator trying to adjust without the necessary room.

This led to the gun operator having to put the gun on with the handle in an almost horizontal position, rather than the 45-60 degree angle usually used (see below).

This meant that not only was the socket not aligned with the nut correctly, they weren’t able to apply the force they usually would either.

With the gun attaching to the nut at an angle, rather than normally square on, the impact between gun and nut led to the metal being machined off. 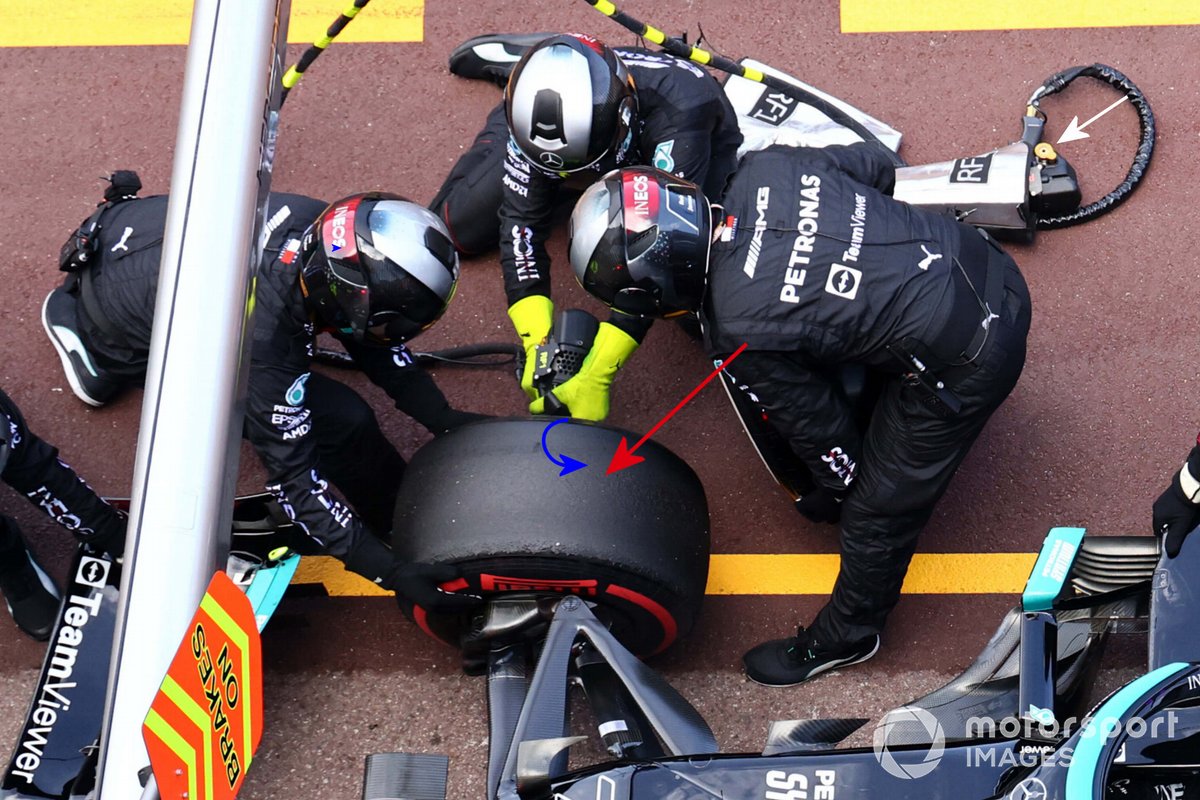 The front wheel nut locating lugs were torn off and a visible puff of aluminium dust then exited stage right. Even with a valiant effort made by the gun operator to resolve the situation, the die had already been cast – Bottas was out of the race.

During that sequence of events, the gun operator seemingly punched the side of the gun several times too.

This was not an angry response, but was rather the use of the gun’s directional shuttle which automatically switches direction when the gun has been spun.

This enables a quicker stop under usual conditions as the operator has one less physical activity to attend to as the old wheels come off and new ones go on.

However, when a situation like this occurs they must manually override the gun, with the shuttle visible on the spare gun behind (white arrow, above).

Italian company Paoli supply the entire grid and almost all other forms of motorsport with their wheel guns, which weigh in at around 4kg and pack around 4000Nm of torque.

But that’s not to say they’re all the same, as each team not only makes a selection from Paoli’s extensive offering, they also customise them to suit their needs based on their other equipment choices, ergonomics and most importantly – the never ending search for performance.

Here then we look at how each team had adapted guns to better suit them. 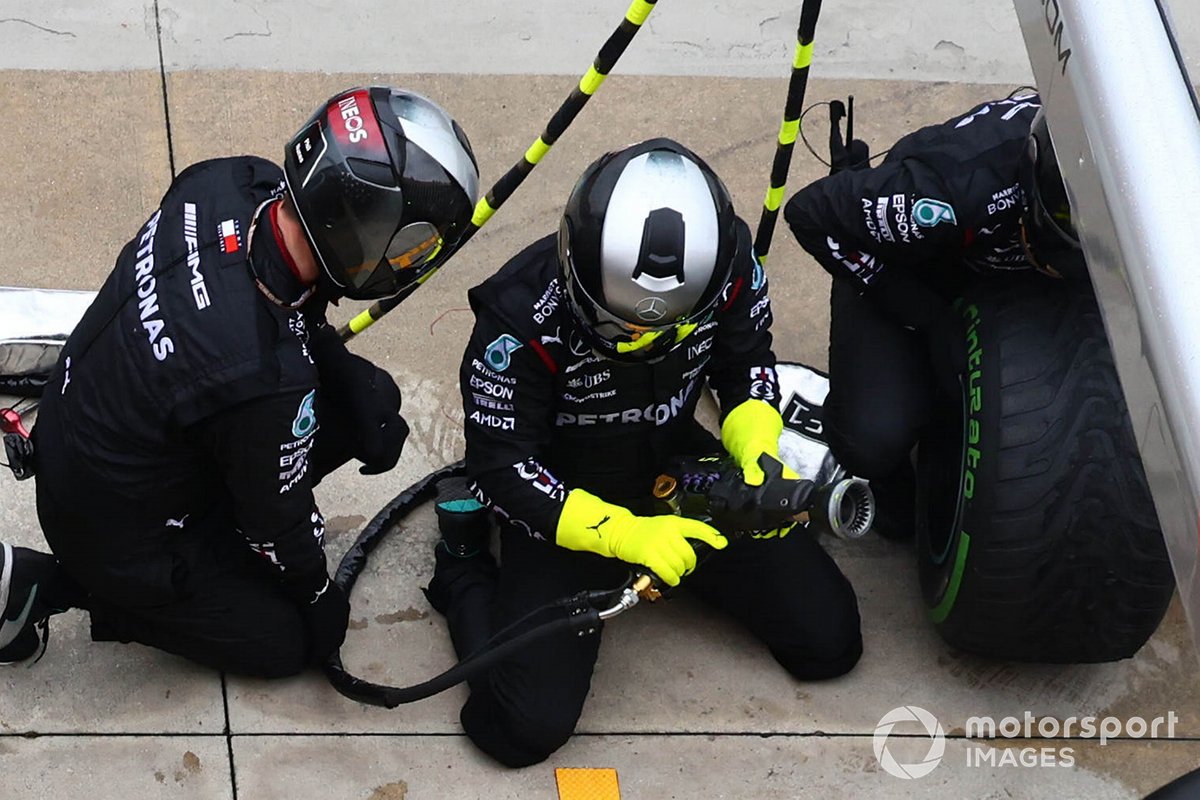 Mercedes‘ wheel gun has a top hold moulded grip, with the mechanics opting to hold the gun on its side when in operation. It still has the more conventional directional shuttle but it’s design is not entirely standard, with a rearward tab and flat edge, rather than the domed design seen elsewhere. 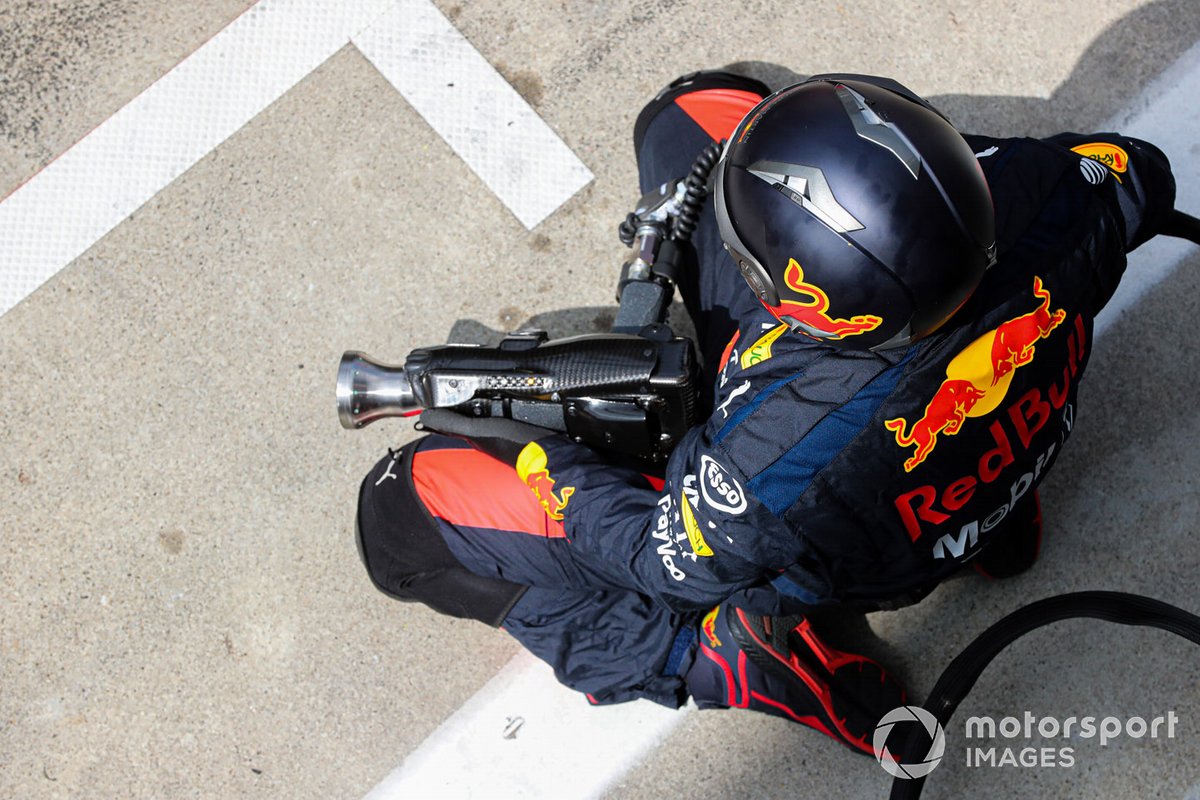 Red Bull‘s wheel gun customisation clearly has to be at the top of its game, with its crew often able to achieve the now sub two second holy grail. We can see the carbon shroud and light system on top of the gun. 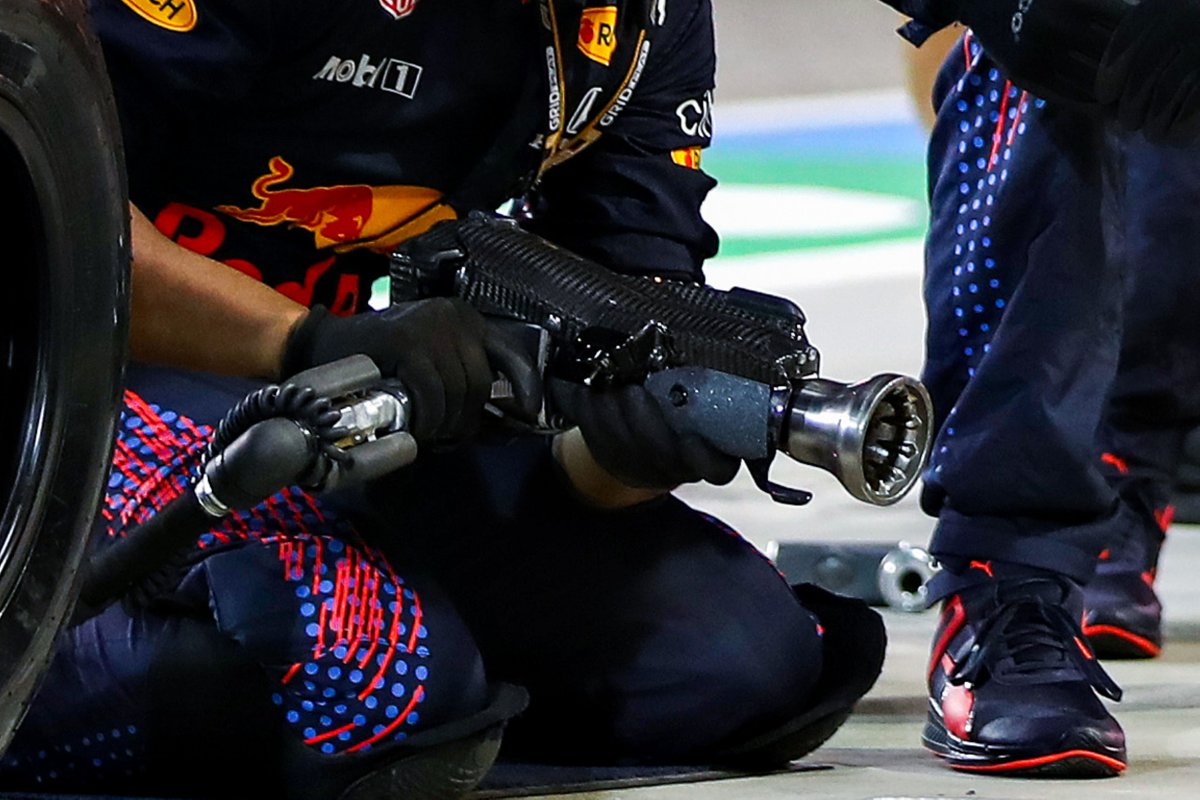 From the underside we can see how the carbon shrouding is sculpted and not only does a button reside next to the mechanics fingers but also a toggle switch in easy reach to be activated. Interestingly they don’t appear to have the traditional shuttle on the butt of the gun either. 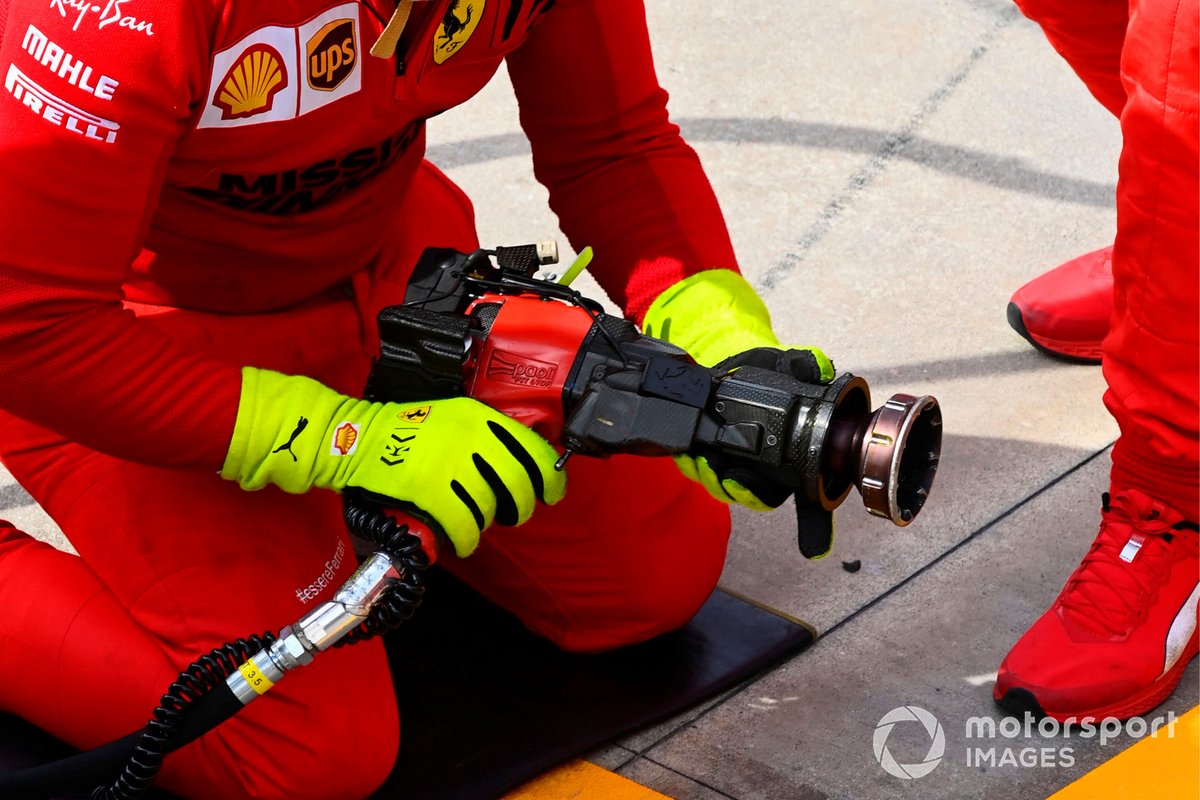 Ferrari has a red body on its gun, of course, whilst choosing not to have an overtly sculpted top grip as the mechanic holds the gun near the collar instead.

The team also have a carbon cover over the shuttle to prevent the mechanic from inadvertently using it, whilst the rocker switch near the mechanics finger likely sends a signal to the gantry light system. 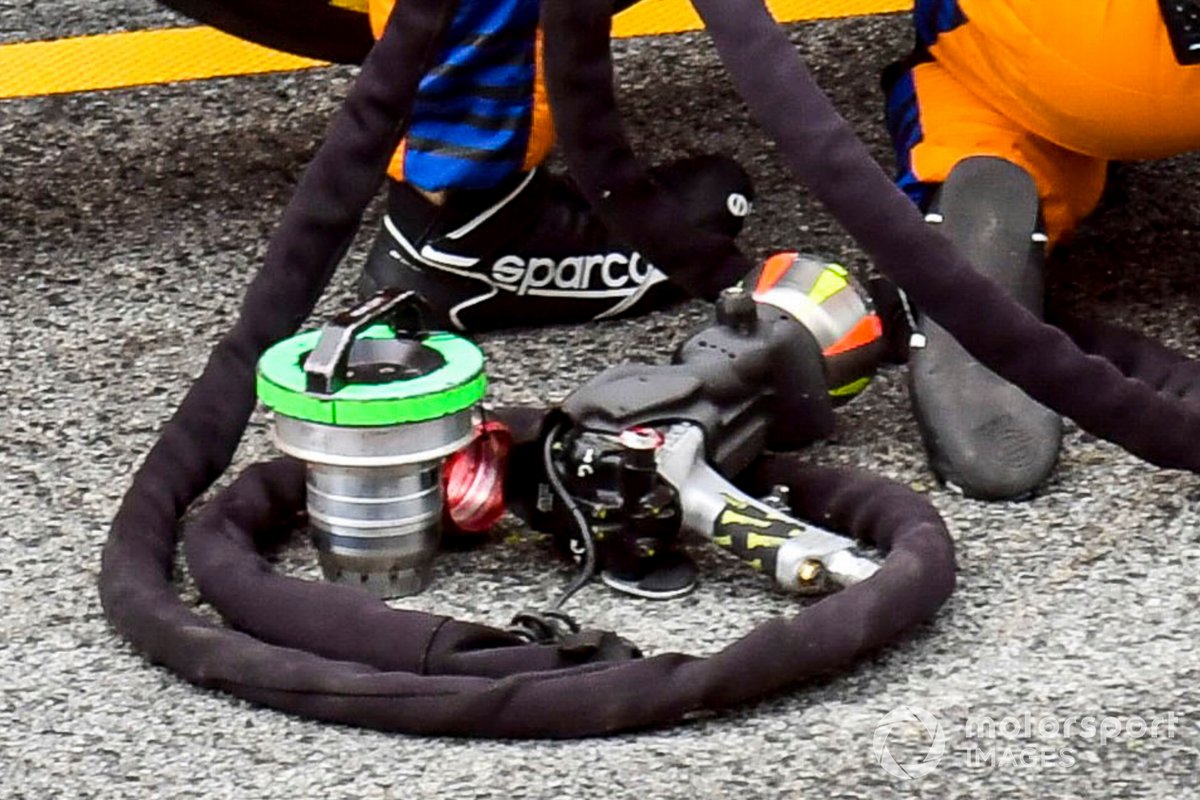 McLaren‘s gun has a sculpted surround to wrap around the main body of the gun and make it both more ergonomic for the user and also house the electronic additions. Also note the manual extraction tool and spare wheel nut that the mechanics keep to hand if the airlines to their section of the gantry were to fail. 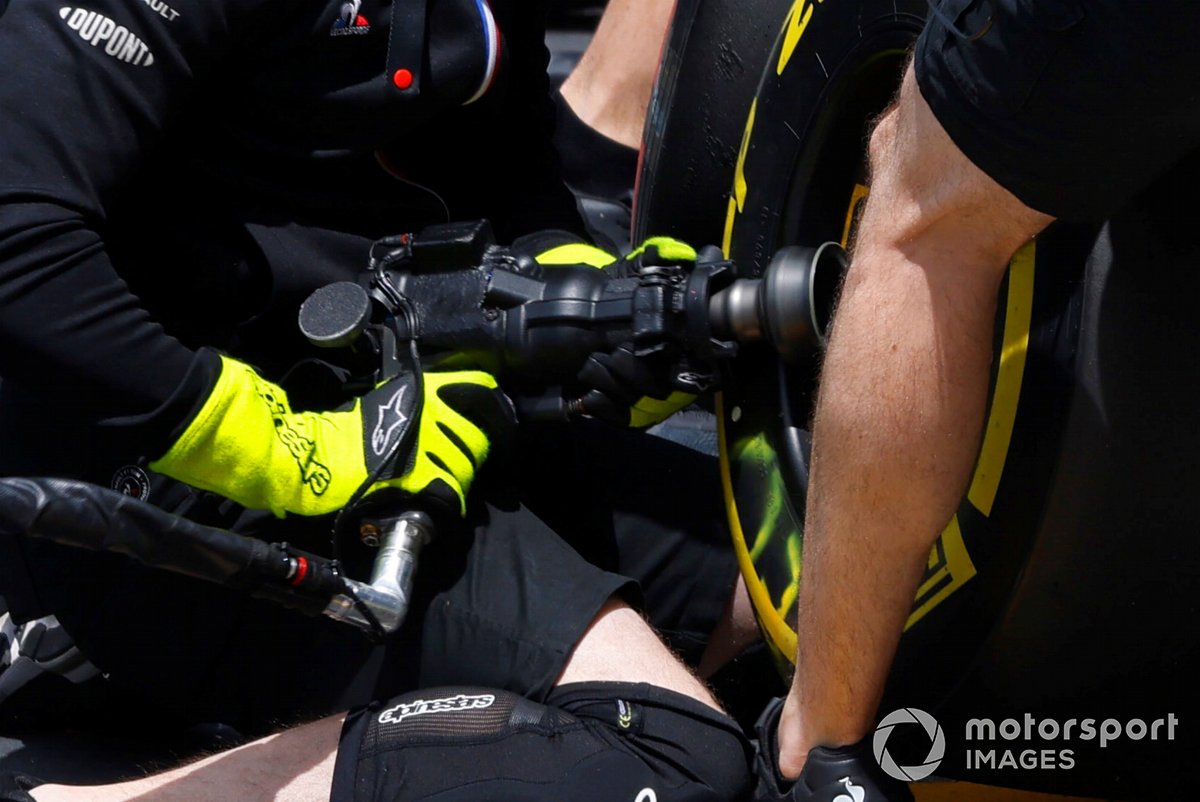 Alpine‘s gun has a custom body, rather than a shroud, but it’s not as heavily contoured for ergonomics as some of their rivals. The shuttle has a large disc on the end in order it can be activated quickly and without mistake by the mechanic. 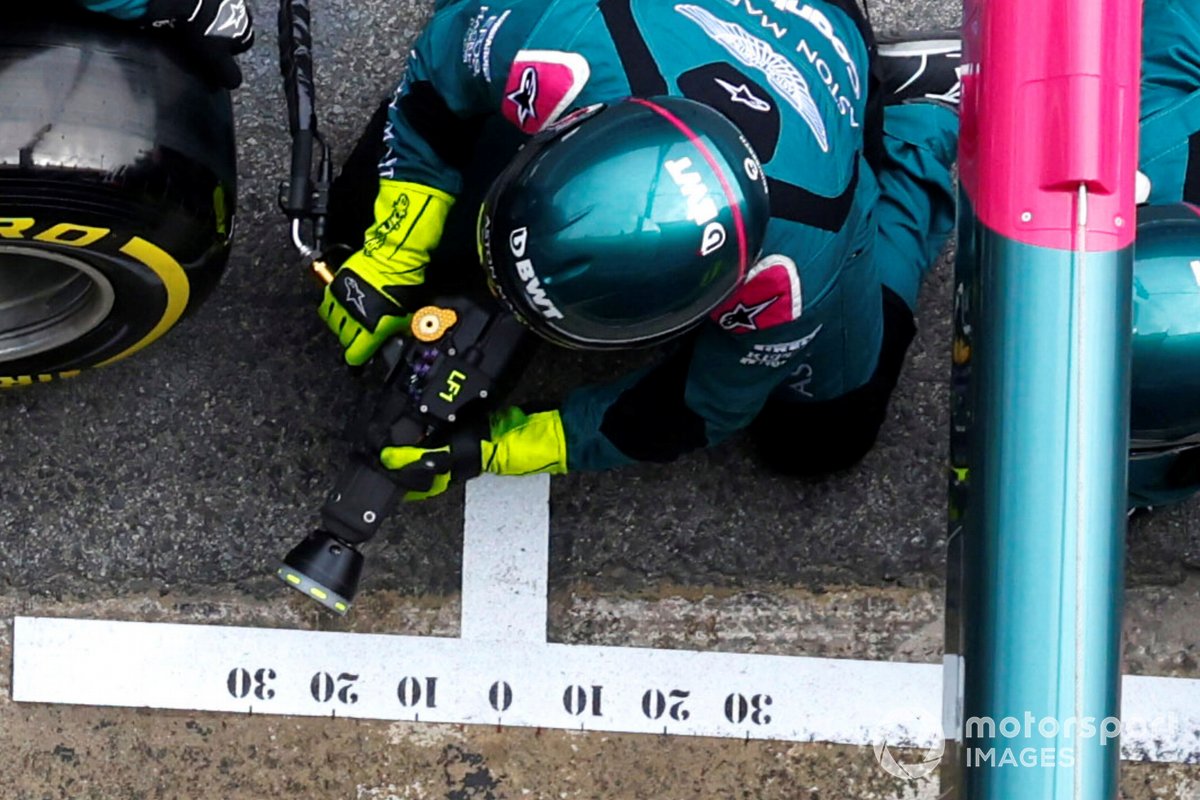 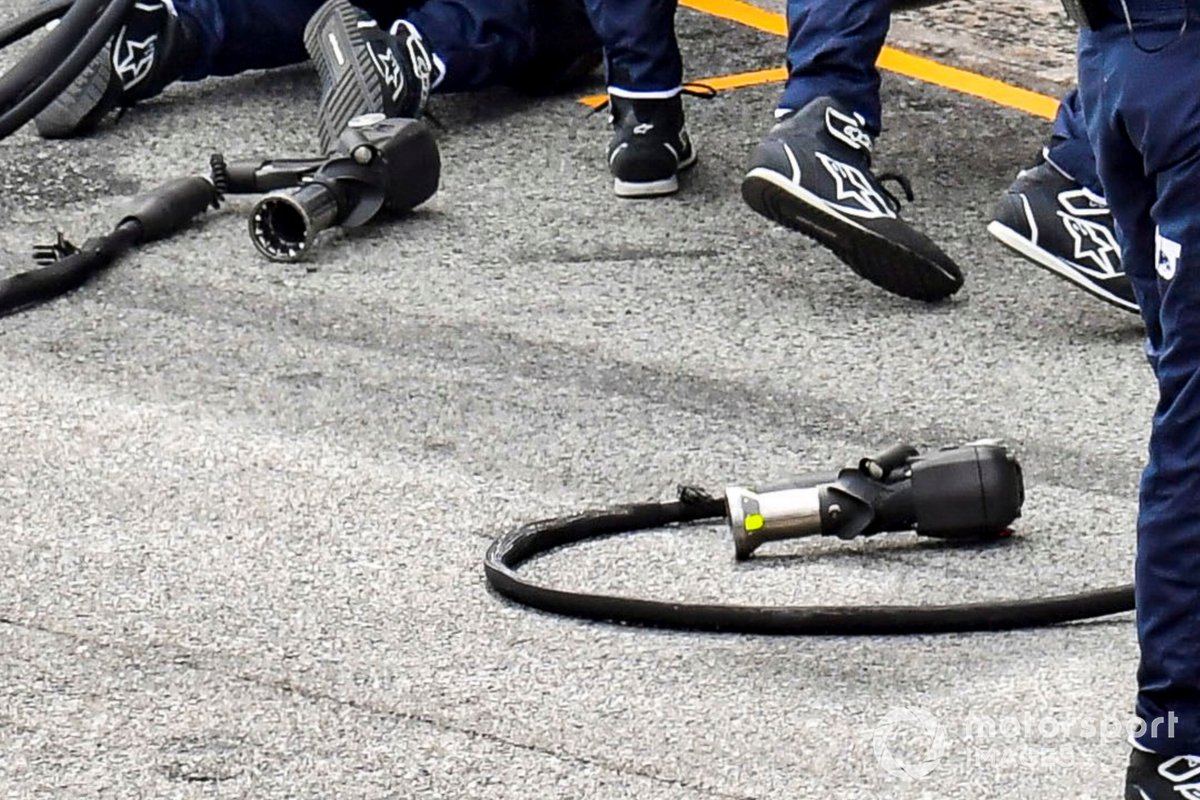 AlphaTauri hadn’t covered its spare guns when this picture was taken, providing an ideal view of the gun from multiple angles. It has the directional shuttle exposed and has a larger disc on the end of it to activate the gun’s direction. 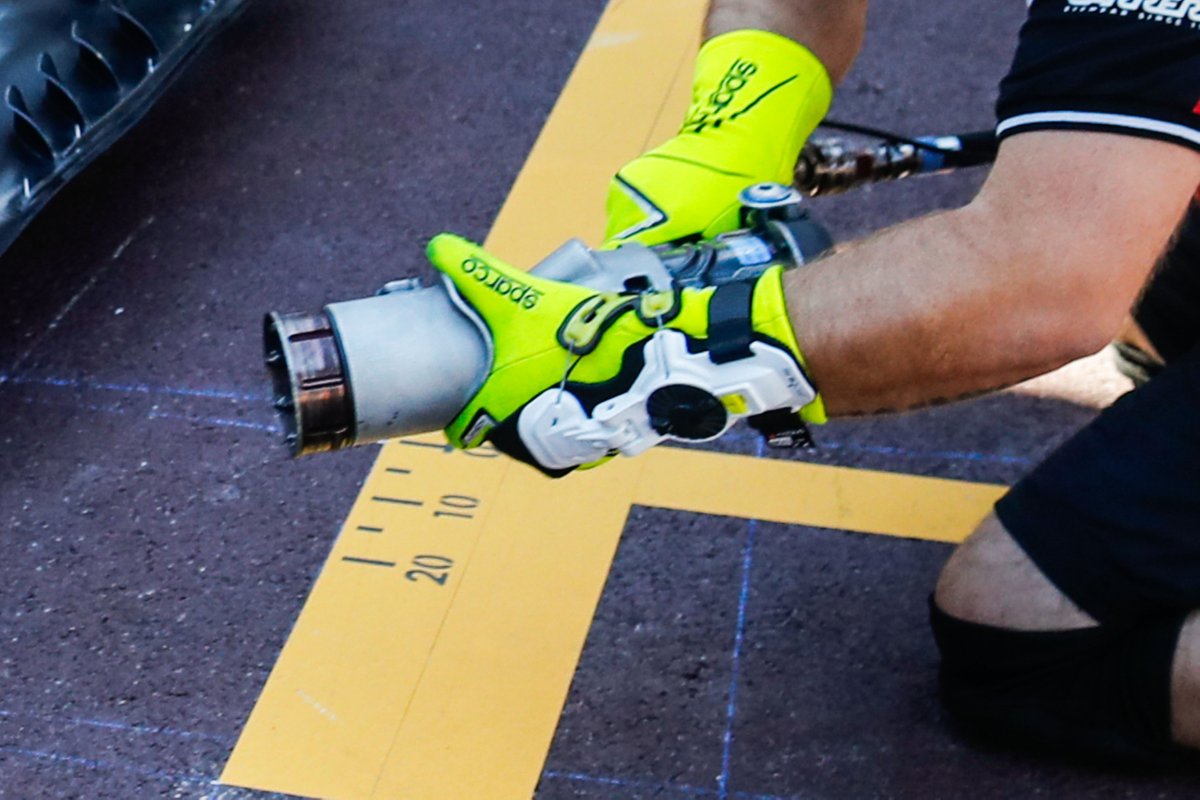 Alfa Romeo‘s gun has a section that the mechanic’s hand can butt up against in order they grasp it correctly, whilst a conventional shuttle is still in operation too. An interesting strapping system is also used by the mechanic on the supporting hand. 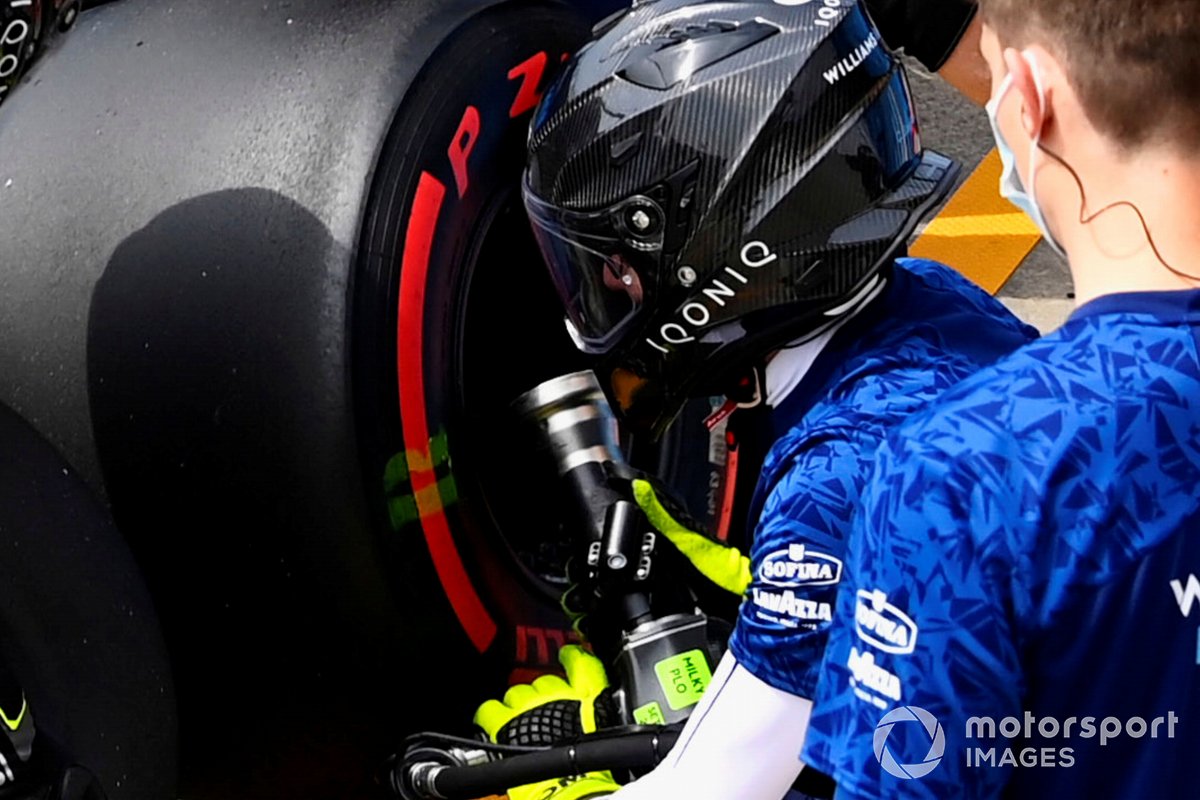 Williams‘ gun hasn’t got some of the extreme contouring on the grip that’s seen elsewhere on the grid. 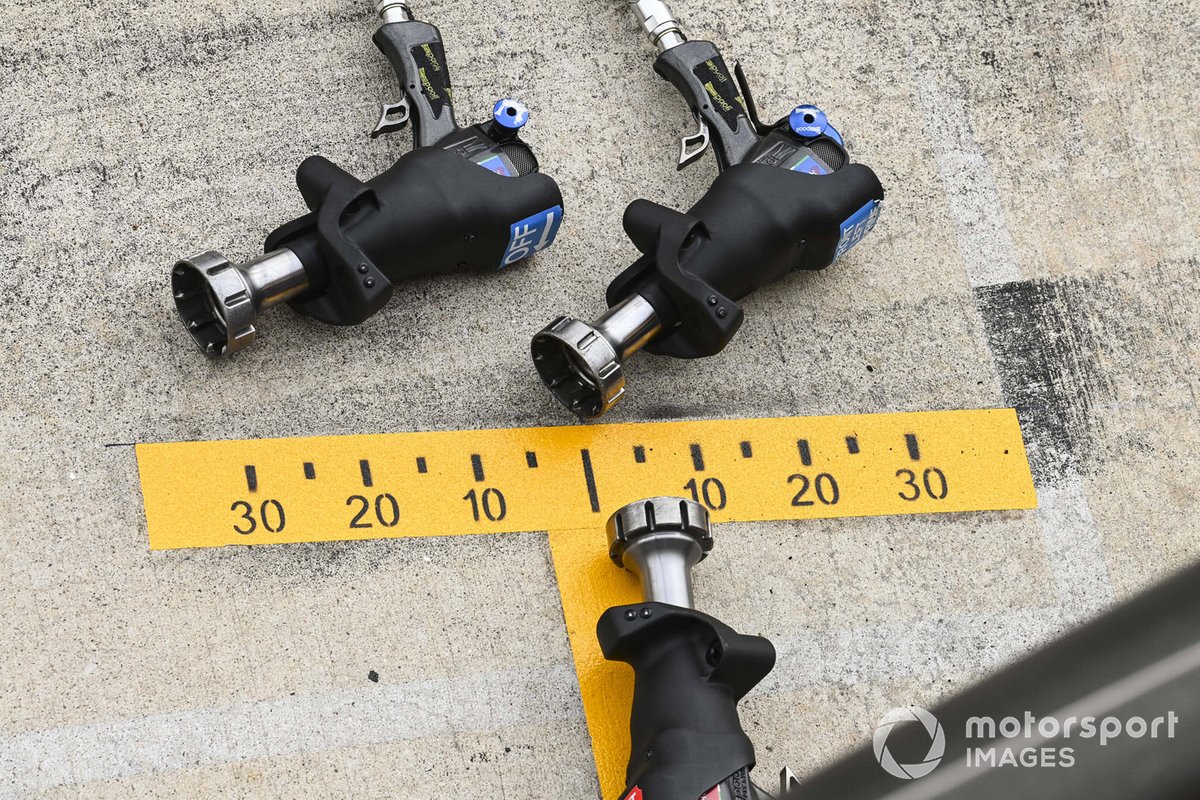 Wheel guns in the pit lane

Haas takes a relatively simplistic approach to their wheel guns, with an ergonomic grip added to the barrel for the supporting hand the only real customisation.

Formula 1 teams moved to a captive wheel nut system around a decade ago, not only to help improve pitstop times but also to work in conjunction with the retention systems introduced for safety purposes.

Of course, just like the wheel guns, each team has its own design, with the lugs on the nut designed to work with the socket on their guns to try and avoid misalignment. 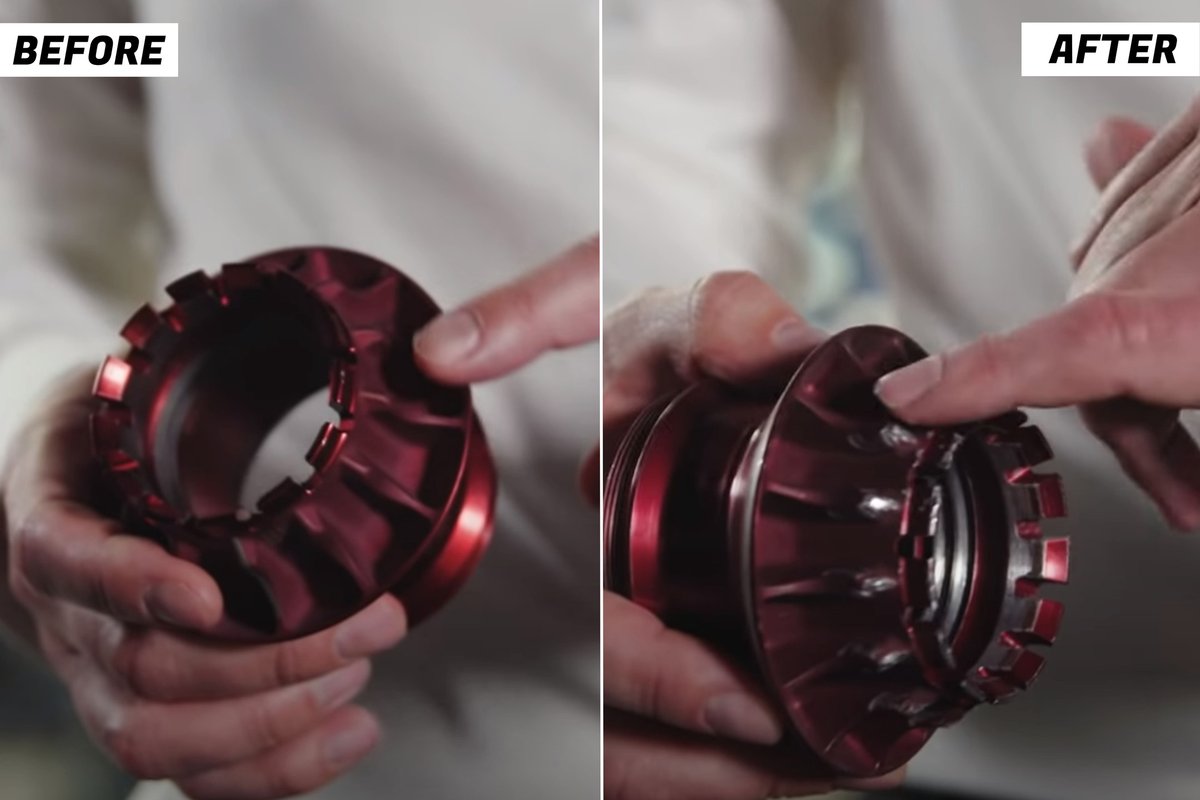 Wheel nuts are considered a perishable item in many respects, as the forces acting on them mean that their integrity is compromised, as can be seen here and as James Vowles explains in Mercedes’ Monaco debrief video.

“It’s an impact force, and what happens is the nut typically loosens in four or five impacts against it, in a hammering action,” he said.

The scarcity of issues during stops suggests that on the whole the teams have a good handle on the design and procedures for a successful stop.

And, with the equipment both on and off the car covered by the homologation rules for 2021, meaning any lessons that Mercedes take away from the situation can only be applied to their hardware for next season.

However, the small details of what went wrong – including Bottas being slightly out of position – will be taken on board to ensure there should be no repeat this year.

Here4dBesthttp://here4dbest.com
Previous articleBayes Esports: How to get hired in esports data
Next articleMaiden MotoGP win at Mugello “not my objective” – Bagnaia

Lacklustre performances from Mercedes in Monaco and Baku has allowed Red Bull to take the lead of both the drivers' and constructors'...

Following the cancellation of the Turkish GP, F1 asked Boullier to move the Paul Ricard event from its original date of 27...