How was Absorb Plus Formulated?

How was Absorb Plus Formulated? 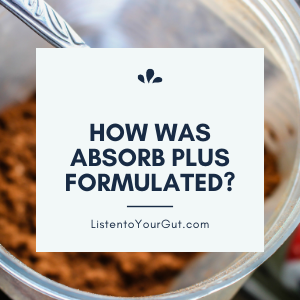 Absorb Plus was formulated by Jini Patel Thompson, the author of LISTEN TO YOUR GUT: Natural Healing & Dealing With Inflammatory Bowel Disease & Irritable Bowel Syndrome.

After a bout of severe intestinal hemorrhaging, Jini’s weight dropped to 99 pounds (she’s 5’7″) and her albumin levels showed she was severely malnourished. After receiving a blood transfusion, her doctor advised complete bowel rest – to allow the intestine heal. Continuing to eat regular food simply re-opened the wounds and started the bleeding again. Therefore, her nutrition needed to come from a completely elemental (pre-digested) liquid source.

Jini tried each of the elemental (pre-digested) products provided by the hospital, but found the taste and ingredient list unacceptable. Rather than undergoing an operation to have a tube inserted in her stomach and the elemental products pumped in, she set out to find a natural, healthy, alternative.

After an extensive search of health stores and the Internet, Jini devised her own elemental formula by mixing together 6 different products. She did this 8-9 times a day to give her body the nutrients it needed in elemental (pre-digested for maximum absorption) form. Using this formula, Jini gained 36 pounds of solid weight (not fat) in six weeks and her albumin levels were restored to normal. She went from being so weak she could barely move around her apartment, to cycling and lifting weights at the gym by the end of the six weeks at a healthy weight of 135 pounds.

Jini included directions for mixing up these elemental shakes

in the first edition of her book LISTEN TO YOUR GUT (Caramal Publishing 2000). In addition, as word spread through family and friends, people with a variety of afflictions (cancer/chemotherapy, trigeminal neuralgia, age-related malnutrition and loss of appetite, etc.) began contacting Jini for her weight gain and maintenance program. However, many of these people and her readers commented that they found it too difficult and time-consuming to mix together so many different products. Having done it herself, Jini could sympathise with them! Fortunately, a year later, she met one of the founders of IMIX and he asked her to replicate her formula in one product. She happily agreed and the result is Absorb Plus.

We know of no other product comparable to Absorb Plus in quality and composition, that is also elemental (pre-digested for maximum absorption). In addition, our own trials, and letters from our customers show that Absorb Plus really works.

How Roku's unusual corporate culture helped it out-execute larger companies, as it focuses on original programming with plans to spend $1B on content next...