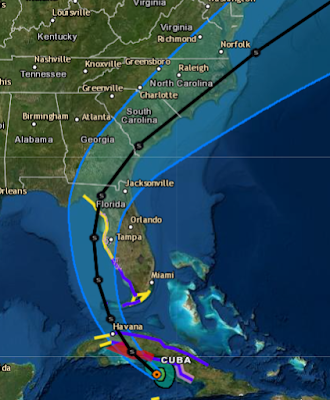 This is the Interactive Cone from the NHC.

Not interactive here but I prefer it to the other. 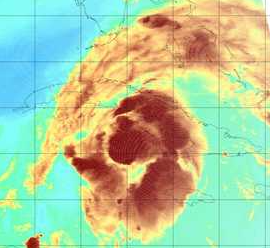 Getting that “embryo” look

Staying simple here for now and writing this while I sip sweet, strong Nespresso while staring at the wide range Water Vapor Loop. Going to keep an open mind this morning regarding Elsa. Bullet point style but not Bulletproof Coffee today but maybe tomorrow.

She’s had problems staying with one center so NHC stays with original cone.

(u know that saying go home with the guy that took u to the Prom?”

(ps best not to date his best friend either just saying………)

Water is WARM over Florida Straits they are an incubator for trouble.

She’s carrying convection consistently in a pocket of moisture since Africa.

Forward speed …moving very slow over warm water S of Cuba can pull it together better.

She has a “look” like she really wants to intensify now, today…. maybe.

Her steering currents left her on the prom floor and ran off with another dancer.

She’s  moving slower than she was – slow speed is a problem in forecasting.

She has crappy really crappy structure for a 65 MPH TS.

Her Barometer Pressure is relatively HIGH not Low.

Still a bit tilted though one center is winning out.

Has to cross Cuba somewhere (message to Elsa: choose wisely where you cross Cuba)

Shear is expected to be an issue …expectations not always meet with expected results.

She is cut off from strong steering currents and is wandering further NW constantly.

Looks more WNW to me but it’s not my call.

She can easily grab onto that moisture trail and turn sharper….

She can easily wiggle up the West Coast of Florida over water.

Her moisture will be East sided and cover Florida if this continues.

Does she ramp up, pull together before landfall in Florida… she did it by Barbados.

How fast will she really travel… its always an issue with her forward speed.

How does Cuba’s terrain ……….land mass impact her.

How fast does she soak up the warm water in the Florida Straits.

Lastly did the models miss anything?

Timing and strength forecasts have been off… even if TS has been liberal with exact intensity.

Bottomline…though she does not impress most mets much don’t count out what trouble she can do down the line. Current image does not predict future results from Elsa.

I like her in ways but hate her in other ways; okay hate is a bad word …. cringe at times and then look back and think “okay not really that bad” and those are the tricky storms I’ve found. That “something” you cannot dismiss or count out and in this case she’s been a fighter all the way through SAL against and into shear and not where a late June African Wave should be in early July so she’s a rule breaker. That’s often trouble. 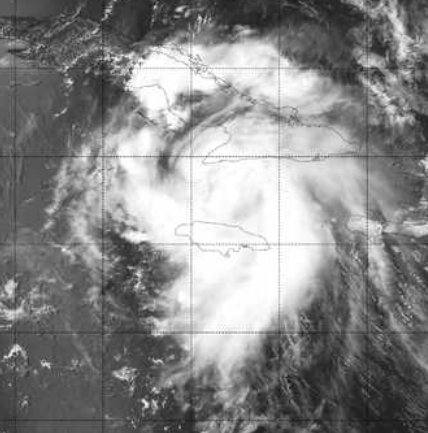 Despite ridiculously high Barometric readings she has that “looK’ like she really wants to be a hurricane again. Note much of her moisture is over JAMAICA despite the constant location readings as “near Cuba” and yes the top end of her is “near Cuba” and as she moves up into the Gulf of Mexico she will keep this profile unless strong shear knocks her off her feet and she can produce flooding rains across Florida after mudslides and floods in Cuba and then possible small end tornadoes in Florida especially in North Central Florida around Tampa North. 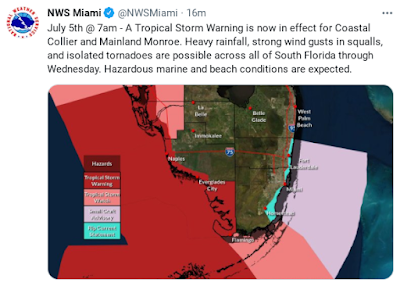 Many possible impacts and trouble ahead.

Not a Cat 3 but could produce stronger than expected damage.

Damage across a wide area.

Tropical Storms like this can be a pain in the ass. 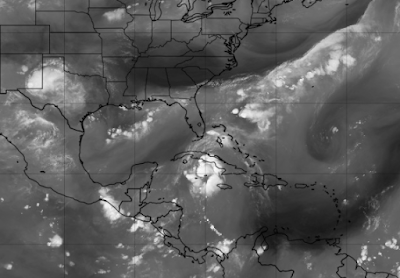 1. Notice the moisture over West Texas.

2. Notice the moisture in the Atlantic East of Florida.

3. Notice the dark air way behind her leaving her a bit adrift steering currents wise.

4. Note the small ledge of dry air from SW to NE just to her NW…

5. Notice dry air to her North carving out a “no go zone” for now.

6. Moisture to the SW of her anchors her and feeds her.

7. She’s hiding down there South of Cuba the way Irma clung to the North Coast of Cuba. 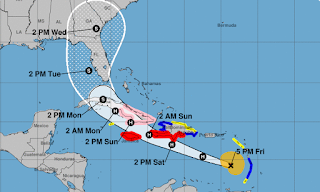 Monday has her further North than current position.

Close but no Cuban Cigar.

They had her as a hurricane for longer….

I always said that Cone would not verify.

Close but no cigar……… 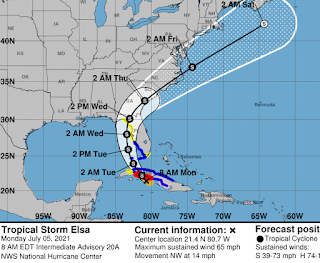 My gut feeling is she is trying to pull it together.

Kind of like football, the longer time the quarterback has in the pocket well protected the better chance he can find a receiver down the field to catch his pass and end up in the end zone… SCORE!

Time matters, it changes everything from exact forecast track to intensity and time of landfalls. The more time over warm water consolidating the better chance Elsa has of staying stronger after she crosses Cuba unless she slows to a crawl and rains herself out over Cuba (long shot) and then just dumps rain everywhere in Florida trashing everything with way too much water.

Her original cone did not verify at all time wise … intensity forecast is tied to timing. Something was missed by models so what are they missing now?

Again it comes down to time…

Stay tuned, Elsa has surprises up her sleeve if you ask me.

Here4dBesthttp://here4dbest.com
Previous articleCryptocurrencies: Not All Doom And Gloom
Next articleVettel puts last lap Austrian GP crash with Raikkonen down to “misunderstanding”

20% Yellow Lead Wave, 40% Wave Coming Off of Africa. Let’s See How It Does Compared to the Models …

Now orange 40% ... ... lead wave is at 20%Models take both these days West.The second wave has better legs.Models are cheap and change...

Invest 91LI'm just gonna leave that here.NHC added another yellow circle.Invest 91L is now being tracked.Why?Current models. Again there are 2 areas within the...