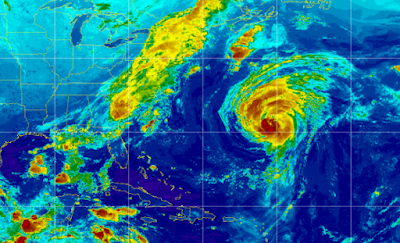 The remnants of short lived Mindy running off with the front.

“Cold front” (not that cold but I’ll take it)

Hard to find Mindy mixing it up with the front! 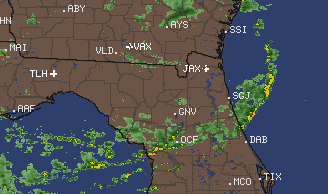 You can see what happened on the WV Image below. 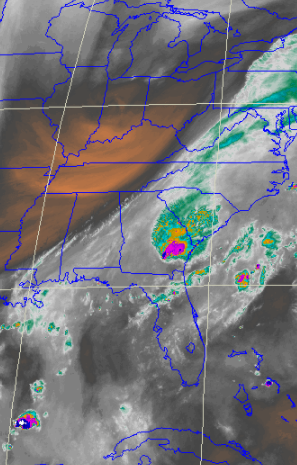 Watching convection near the Yucatan now too! 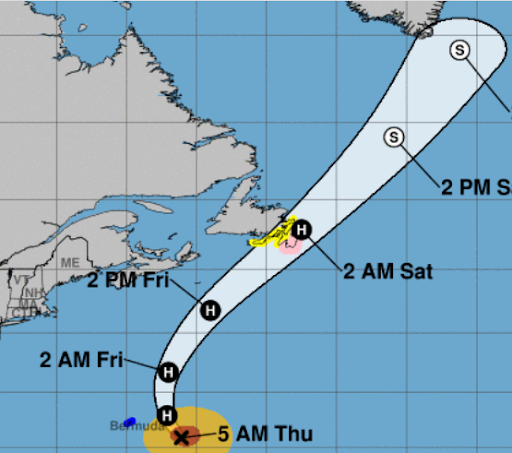 Larry is close enough to Bermuda….

… to allow them to feel Tropical Storm Winds.

(even tho outside the cone)

Obviously due to the large size of Larry.

This was a concern of mine for days since way back.

But they insisted it would be fine.

Fine is relative, still to the left of the cone.

Size matters in the tropics!!

Discussion explaining this new development is below.

https://www.nhc.noaa.gov/text/refresh/MIATCDAT2+shtml/090846.shtml? Good discussion from the NHC this morning. Lately it feels as if lawyers are writing the discussion and to be honest, meteorology is harder than being a lawyer but probably not as hard as being an architect.  Meteorologists get away with more because weather’s nature is that it changes, flows and rearranges often and you can’t really blame Mother Nature can you? I say that as everyone these days feels they can blame someone for something yet legally not so much so.  Bermuda IS going to feel impacts from Larry, definitely not that strong compared to as if it had made a bee line for a cove on Bermuda, but still they have a Tropical Storm Warning (means they should get TS winds,

The main point is shown below. 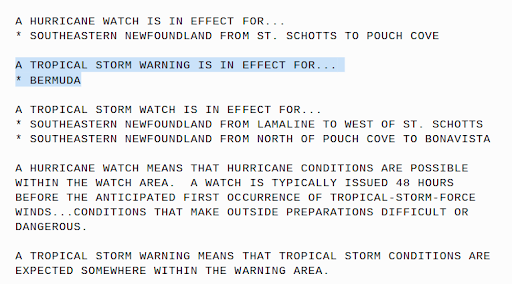 It seems Larry is tracking along the left side of the forecast envelope afterall, as many said it would, but luckily for the Mid Atlantic, though only Bermuda is in play and even that just has tropical storm force winds. High Surf there and everywhere.  Newfoundland now has a Hurricane Watch, so we will wait and see if that extrapolates to a Hurricane Warning down the tropical road.

Further to the West of Hurricane Larry…is Mindy.

Or what is left of Mindy.

You may have missed her …

….if you were not online last night. 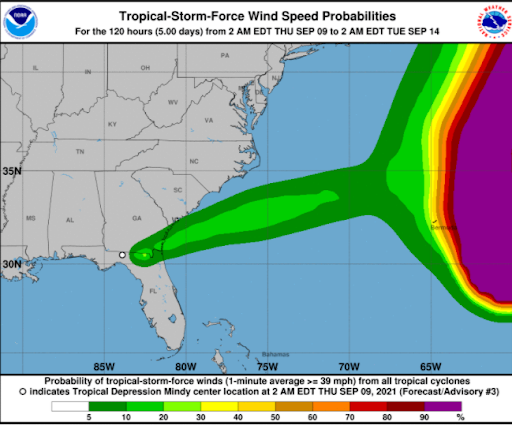 The green streak is Mindy.

The big purple blob is Larry.

Larry sucking all the energy out of the tropics.

Isn’t it interesting they are almost at the same latitude?

Hits me as interesting.

Next we have Mindy, somewhere over the back roads of the Florida Georgia border, a place my Grandma Mary tried to avoid if at all possible. She said it was a “nasty swamp” and while right in some parts “with Gators!!” they get some of the best sunsets anywhere in the world.  As I said in previous discussion it would most likely become a very weak tropical depression or storm but nothing more, due to the closeness of BIG BAD LARRY and the delightful cold front both beckoning it towards it and moving it away. It made landfall last night, a few hours after it was born near St. George Island and impacted INLAND areas to the North such as Tallahassee. Those beaches are their beaches, it’s a longer drive than you might imagine but not as long as it is for me from Raleigh to Wrightsville, Beach. Amazingly though the beaches there look more like Carolina beaches than Florida beaches.  St. George had a wind gust of 42 mph, by the way in case you wondered. 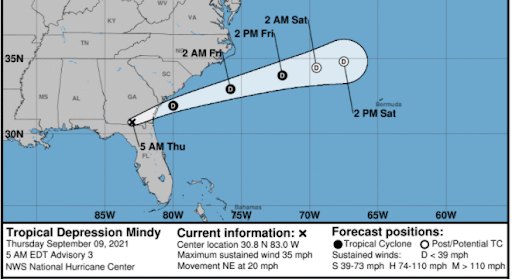 Where is Mindy’s remnants going next?

Savannah is going to have a wet day.

Not a very bad day but weather just the same.

I told myself yesterday, after much introspection, that I’m going to be more forgiving this year. So while not going on a rant about the NHC or NWS Tropical Division, as I like to think of them these days, what were they thinking I wonder. The perfect excuse for Potential Tropical Storms was the recent Invest that was tracked for days and then upgraded to Tropical Storm strength about 3 or 4 hours before landfall. Many have argued they complicate matters, I do not agree as they provide warning to folks in the path of a tropical storm such as Mindy that otherwise would make landfall as a Tropical Storm that no one saw coming (especially out on a barrier island where it takes longer to pack up and drive back across the huge, long bridge and swamp land of Northern Florida than you can imagine) giving less than 4 hours notice that a Tropical Storm was making landfall. What were they thinking? I’m just curious. Luckily this didn’t ramp up beyond 45 miles per hour and moved inland fast, but why not put up a Potential Tropical Storm Warning and cone 24 hours out when despite a 50/50 chance of forming models did show this could happen. Either ignore it and let the NWS put out Small Craft Warnings or put up a Potential Cone a day before.  Just saying.

Looking down the tropical road. The wave off of Africa is forecast to go HIGH fast, and now there is a yellow area where there used to be a yellow area now expected to possibly get into the BOC. This has been a feature on models for some time now showing two systems coming out of the same area. The first being the short lived Mindy and the second … well let’s see how the day progresses. Definitely an area we will continue to watch as the 2021 Hurricane Season rolls along.

Stay safe, stay informed and definitely stay informed of the formation of any storms by following those who you trust over time to provide that sort of warning for you and as always listen to any official watches or warnings from your local NWS!

Ps Officially Mindy is not expected to reintensify. Normally I’d agree, what with her fooling around with the frontal boundary but she is moving to my eye faster than expected so perhaps she reaches water with just enough “oomphf” left after raining on Savannah and Charleston’s parade to get something going. Who knows. Been that type of hurricane season.

Trying to reason with a lot these days …. enjoy the music!

Winter Storm 2022 vs Hurricane Dorian? Same Logic. You Need a CLOSED CENTER … DATA to Work With… Models Trying Hard. Too Soon to...