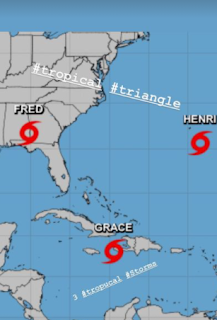 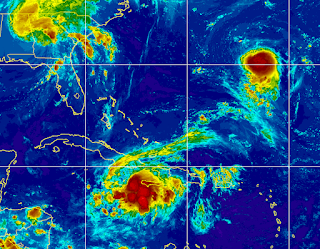 Grace is pumpiing on all cyclinders this morning.

NHC has been conservative with it’s intensify forecast.

So I’d expect this to become a hurricane.

Fred made landfall yesterday and is now doing the Applachian Trail, or he will after coming after the people at The Weather Channel in Atlanta and then he moves up through the spine of the mountains. Mountains create the issue of orographic lifting which can bring snow in the winter and flash floods from severe storms when a tropical system passes through the area. More on that later. 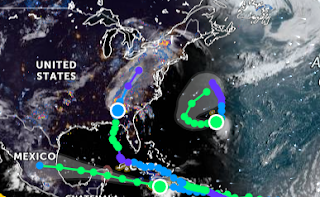 Henri is moving South still forecast to drive carefully by the NHC at 55 MPH for the next several days. It’s not that I don’t believe that it’s just the forecasts this year based on pretty poor modeling has made for many last minute changes. You want examples? Fred didn’t do Miami but he did the length of Cuba. Grace didn’t turn more to the North as early models implied and the track is now straight West and impacting Jamaica and no it is not folloing Fred to Florida. Oops. A real Jamaica Mistaica which is why I used that song yesterday in my blog, because it was apparent Grace was dreaming of a Jamaica vacation. Currently it’s Tampico Mexico or bust unless something changes. And, change has been the game all season as five day forecasts have not verified well. 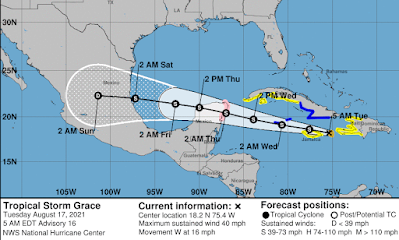 Main concnern for the day is Fred. 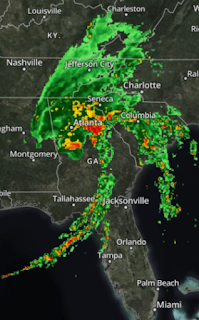 Atlanta and there about getting socked.

Fred is rocking and rolling still!

Downgraded but still a weather maker!

Check out the the NWS main page. 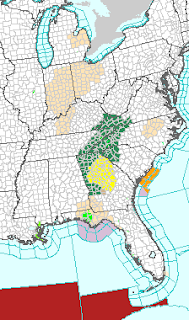 If your region has a box.

Beige is a statement. 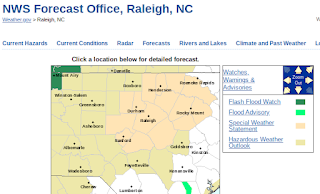 Fred amped up the moisture and weather.

Far from it’s “Cone” but in the moisture flow.

Perspective is the word for the day. Tropical Storm Fred made landfall along the Florida Panhandle. It was a nice blow for the locals who mostly drove through it as seen in the background behind the people doing stories on The Weather Channel. When you live in Hurricane Country storms like this don’t impress you much unless you live immediately on the coast near a road that is prone to flooding briefly easily. Some palm fronds fell down (someone on air pointed to one as debris) and yeah palm fronds always fall on a windy day usually when a palm frond is old and ready to fall. While it was a nice blow, it was not anything huge.

However, the inland impacts from Fred may be more lasting for whichever unlucky town gets a tornado or flash flooding. The legacy of many well developed tropical systems, especially tropical storms, is the impact inland. They provide much needed rain, however sometimes they bring too much rain. Again perspective is important.

I was reading up on an article about the 1846 Havana Hurricane when I immediately realized that was the 1846 Key West hurricane I’ve researched often and also the 1846 Tampa Bay Hurricane that hit in October as many of their worst hurricanes do often. October brings those mean, huge hurricanes like Mitch and Matthew and Sandy that grab a free ride on a cold front and sashay straight up some unlucky coastline. It depends where you live as to which hurricane it was but it was the same hurricane. 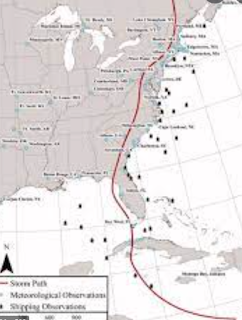 A track like that today with an intensity of Category 5 on landfall and a Major Hurricane coming into Tampa after doing Key West after it slammed into Havana and moving up the coast would be an unthinkable track for both misery and it’s adjacent monetary angle. There were impacts in Georgia, in Charleston and trouble wherever it went. Camille was a Louisiana Mississippi hurricane but it was a flood maker all the way to Virginia . 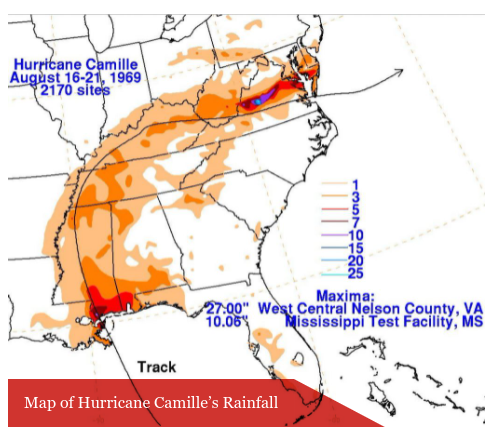 Read up on the Havana Hurricane of 1846 and note how many places it impacted in it’s violent track.

https://en.wikipedia.org/wiki/1846_Havana_hurricane It’s especially relevant THIS YEAR because the forecast has been for a long, active hurricane season going deep into October and fronts are forecast to be on the move. You want one more example? Hurricane Sandy connects in our mind as a New York City storm and yet it slammed into Cuba and to Cubans they think of it as a Cuban Hurricane. There was a funny scene a while back in the TV sitcom “Sheldon” when Sheldon becomes friends with another gifted student who is from Vietnam. He invites him to his home for dinner and at the table his father mentions the Vietnam War to their guest from Vietnam and he looks up and says “in my country we call that the American War” very informative to the dismay of Sheldon’s father who can’t understand what he means. Perspective! 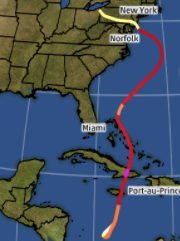 It’s all about perspective be it politics or weather or how memorable a hurricane made landfall.

How busy is this season? Oh very busy. But you are thinking mostly crappy storms not worth remembering (unless they impacted your home) and yet this is the middle of August and we have only just begun. 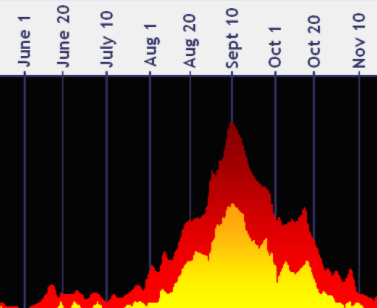 Have a good day. Yes, there are strong waves rolling off of Africa and Fred is rocking and rolling over land the place he seems to enjoy the most and Grace is firing on all cylinders so while there may be other things to talk on it would seem prudent to me to watch Grace because I don’t trust her and I don’t trust the current forecast that is quite conservative on intensity. Henri is either boring or a wild card, time will tell. 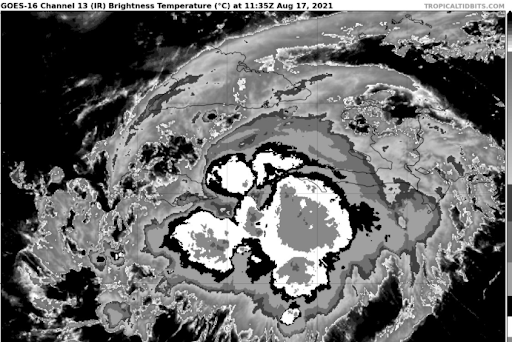 Ps only song for the day is this one…  no not playing the Carpenters song but truly we have only just begun!

Here4dBesthttp://here4dbest.com
Previous articleMonte Carlo closes $60M Series C on the back of rapid ARR growth – TechCrunch
Next articleOpinion | Extreme Weather Is the New Normal. We Know Why.

From Zoom Earth below showing all the players.Monday morning in the tropics. According to the NHC forecasts both Peter and Rose are going...