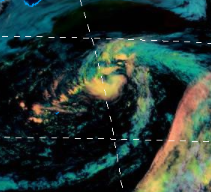 Today is kind of a work in progress post here as we are watching Invest 90L look more and more as if it will get the name Ana. Systems such as this have a brief window for that sort of development out in the open Atlantic on the other side of Bermuda but many take advantage of it and do get a name. Pulled together tremendously since yesterday at this time. NHC indicates in their discussion that it could likely get a name later today or tonight. Models take it away from the US and Bermuda so it’s more a marker of the start of the season and an issue for ships at sea.

As for Invest 91L it’s headed towards landfall.

Models are direct and predictable.

As for 91L that in theory could become a Tropical Depression or Bill briefly before landfall it’s important to remember the real threat here is the threat of continued tropical moisture raining down on an area already used to having daily flood warnings.  Parts of Florida and the Carolinas would kill for this sort of rain and they probably should be careful what they wish for … but parts of Texas are already inundated. Further upstream in the farmlands looking for rain they will be happy to get whatever they get from Invest 91L.

This is a true tropical transport.

And that’s good because…….

…it has little time to really develop.

I’m curiously watching areas of moisture down near the Yucatan that have been flaring up and firing off and flaring up again.  Just something that catches my eye and distracts me from the poorly defined but developing Invest 91L. One of the best sources of information with a system such as this is the local NWS and the one in Houston is one of the best.  Note the base of that arrow extends down near the Yucatan, just saying.   Whatever happens with 91L know that there is more coming up from down below and at some point we will be talking hurricanes not marginal tropical depressions or storms. 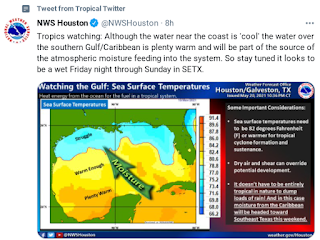 Is Ana in the Atlantic?

Or could 91L steal that name?

We should know the answer soon!

Here4dBesthttp://here4dbest.com
Previous articleConcerns raised over long Covid impact on north-west England | Long Covid
Next articleMass Effect Is Crossing Over With No Man’s Sky

Invest 90L off the SE Coast. 30% Friday AM Invest 90L has been tagged off the coast of Florida just to the SE of...

PropertyGuru, which runs real estate rental and sale listing sites in Southeast Asia, is going public on the NYSE via a SPAC merger at...

These 8 Swim Trends Are About to Be Everywhere