Hurricane Sam Following the Plan …Staying Away from the East Coast So Far. 2 80% Red Circles Behind Him. Memories and Looking Forward Highlighted Today… October is in the Wind.

Hurricane Sam Following the Plan …Staying Away from the East Coast So Far. 2 80% Red Circles Behind Him. Memories and Looking Forward Highlighted Today… October is in the Wind.

I like to use different images of the cone for Sam.

Not much to add on Sam other than the research team flying into Sam has obtained lots of data they are using now to forecast as well as possibly make forecasts better in the future. That’s really the goal here is research to learn more and more about all the things we don’t know –  – especially regarding rapid intensification. 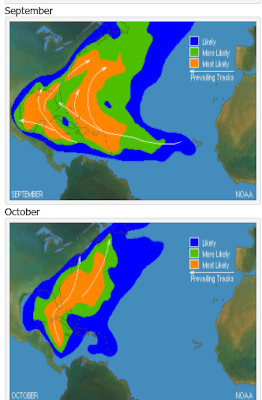 That brings us to my next point I want to make that I have been pushing for days. We are about to go thorugh that change from September to October. Note the two images above and you see the sudden rearrangement of alignment of possible hurricane tracks. Usually what happens this time of year is that waves off of Africa that get red circles sometimes stay low and make it across into the Caribbean, where they wait for the next cold front to drop down (if there is a front and this year we seem to have fronts) and catch a ride up the front into the SE as you see above.

If either of these 80% chance red circles stay low and get into the Caribbean, missing the detour into the Atlantic that Sam took being a September storm, then we get an October possible storm developing. Most long range models show pressures lowering and climo wise that could happen and add in low waves headed into the Caribbean you get an October storm pattern.  I know you are thinking but we are running out of names, okay many of you know how this goes, but yes we are mostly due to a large amount of “shortie” storms that formed fast and left just as fast. October storms generally are not “shortie” storms but long, lived “hang around” storms that cause misery there and up our way.

Mike made a graphic. He is good at that.

Caridad in the Caribbean?

Who knows… time will tell.

If anything happens later today I’ll update the blog. Give thanks that Sam stayed away I suppose, beautiful to watch from far away and so give thanks and enjoy what’s left of September. I’ll be offline Tuesday and Wednesday for a holiday called Simchas Torah which can be a lot of fun. It was especially fun in Miami in the 1990s… I will say that! Some of the best/funniest, most endearing memories of my life. I’ll try to find some good memories this year and I’m happy it’s cooled off up here and that means the leaves will begin to turn and we will be knee deep in Fall Foilage Fun! Yes, all capitals.

Wilma was our Simchas Torah storm in Miami, though have to admit it came afterwards when we had no electric and everyone walked to Temple with flashlights, light sticks and partied under a chandileir filled with hanging flashlights and light sticks because one way or the other even a week later the party must go on. A memory where we overcame lack of electric, AC…. etc and life went on somewhat differnet but it went on and well growing up in Hurricane Country we learn to adept in whatever way we need while we slowly get back to normal. 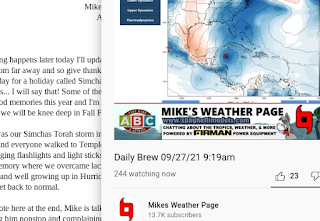 Funny note here at the end, Mike is talking on his Facebook Live and complaining about someone who was bothering him nonstop and complaining about far out models that show us possibilities. Um, this is what people want to know. People know the different between “this could happen” “this might happen” “it might not happen” but want to know “what might be happening” because that’s why you are here, knowledge is power.  And, as he said it’s “HIS PAGE” he shouldn’t be told what to post, if you don’t like it go to someone else’s page. Then someone bitched to ABC Liquor Store that supports his page and complained they shouldn’t support someone who drinks. I mean you can’t make this stuff up.

But that was why I started my blog years ago. I was on a gazillion message boards, after Weather Chats rearranged my life and evolved into “Message Boards” and the message board on HurricaneCity was filled with feuding over what you could or could not post. So I thought… “blogs” umnnn well I write, I journal, maybe I should start a blog. And, that’s how this blog became, more a place to rant, be silly, write fun stuff and hopefully educate people about what was happening or might be happening in the tropics during the Hurricane Season. Off season back then was usually way off topic from weather but very few people read it then and I often changed the names to protect the not so innocent.

As for Mike, yes listening to him ramble on and on about NASCAR (forever) and complain about the person complaining about him and talking about long range models. I feel at times like I’ve grown up with Mike and we must have done this in Elementary School pissing off the teacher as we whispered about a possible hurricane coming. But, no we met online where we all had our second childhood talking about how much we love weather.

If you are here…. you must love weather too!

Check back Wednesday night when I will update the blog. Til then pay attention to Mike as he talks tropics though he’ll be away at Talladega (sounds like so much fun) and before you blink it will be October!