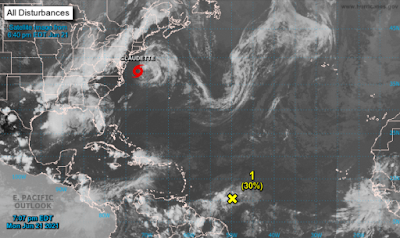 Claudette is on her way out to sea.

Yellow Circle up to 30% in Atlantic.

What’s Up with the GOM rain.

I’m going to keep this short tonight, but there are a few things that need touching basing. You know what I mean.

#1 Claudette is forecast to go out to sea.  Trivia extra credit: NHC upgraded her twice over land.

On one hand it’s dry, hunted by SAL to it’s North and running out of ocean.

On the other hand, the fact that it’s alive says a lot for it.

Bottom line watch it as waves that last this long can get into a friendly spot and develop. 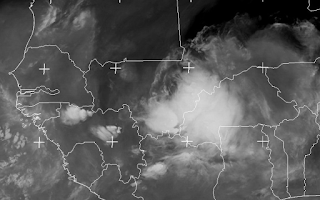 #3 African Wave leaving Africa is HUGE and another bigger one is behind it and HIGHER.

When waves come off close to Dakar they have a better chance of development.

On the other hand SAL is more likely to suck them dry in late June.

Models are latching onto the lead wave but they keep it weak and it unravels.
The wave shown above the models like better. They keep it intact across most of the Atlantic.

It could be a player down the road and the first good wave with real model support long term.

#4 GOM Moisture. Everyone wants to know what’s up with that.

It’s the moisture that Claudette left behind … basically.

I said Claudette had a second part to her that didn’t develop. Lots of rain no closed low.
When Claudette took off rapidly for Georgia and South Carolina an area remained behind.

So far………nothing is going on it seems vaguely anchored there.
IF it stayed there a while it is possible pressures could lower and we’d watch it carefully.

Close in areas such as this can be a real pain in the ass … they cling to life and drain everyone.

It’s annoying as some areas are flooded from Claudette.

Lastly……… people are beginning to talk online, as they do this time of year when they are both bored and restless for the real thing… the long tracking waves that turn into hurricanes. It’s been noted that the water temperatures seem cool in the Atlantic. It’s been said that something is off with the flow that impacts the Gulf of Mexico and people argue incessantly this time of year on El Nino, La Nina and the always dreaded Neutral Year. Misplaced convergence zones and aliens possibly involved in weather modifications.

Okay I made up the last one but the point is……. do not believe the stories passed around in June about what will be for the 2021 Hurricane Season. One meteorologists is quoted and the next thing you know the press is hungry for a story or even a headline.  In 2018 the Internet went crazy quoting a comment Phil Klotzbach said while analytically discussing the Atlantic and every news source promised a quiet hurricane season. I wrote a long blog where I honestly lost it trying to explain that people should NOT let down their guard.

2018 gave us historic flooding in the Carolinas from Hurricane Florence that crossed the Atlantic, despite constant predictions it would die, and made landfall and rained itself out for days. Jim Cantore was stranded in Wilmington, the highways that had been underwater in North Carolina had to be rebuilt. Michael ended the season as a Category 5 in the Florida Panhandle obliterating parts of Mexico Beach and in between lots of storms formed.

Every year there is some comment that is quoted over and over and repeated on the nightly news (if you still watch it) that this hurricane season might be slower than expected because ______ fill in the blank___.

Every year things heat up in July and get hotter in August and suddenly there are real storms everywhere.

Saharan Air depletes tropical waves of their moisture and that stops them from becoming Hurricanes out near Africa. That’s good because who needs a hurricane out there and yet it’s bad because sometimes they survive and flare up closer in as Camille did when it officially formed in the Caribbean… from a wave that rolled off of Africa.  A wave doesn’t make it into the Caribbean due to Eastern Shear and it wanders North of PR and suddenly close in to Florida if flares up. The list goes on and on… including Andrew that barely held onto it’s status and then went from a weak Cat 1 to a Category 5 two days later headed straight for Miami.

Do Not Believe the Hype.

Do not click on links in emails that are unfamiliar to you.

That’s it. Don’t believe a wave can’t develop due to SAL … SAL will keep it in check then there’s other issues … takes a lot to build a hurricane and takes a lot to stop one once it’s rolling. Prepare, make a plan of action and a back up plan. And, go about life until there’s a Hurricane Watch posted by the NHC.

If you want to read a long rambling blog with very good information … click on the link below.

Not proofing this because I’m tired and it was “feels like” the mid 90s where I live today and my asthma gets bad but on the other hand I can take medication that makes me hyper so on the other hand..

There’s always an other hand in June.

Thanksgiving Week! Hurricane Season Over… If You Were NOT Impacted This Year… Be Thankful! Why is Chanukah SOOO Early This Year??

This is an excellent collage from Twitter.Larry, Sam, Ida, Grace stand out from the pack......lots of oddly shaped, short lived storms.Yet, the multiple...