Gojek and Tokopedia, Indonesia’s two biggest start-ups, have agreed to a merger that will create an $18bn food delivery, ride-hailing and ecommerce group with reach across south-east Asia.

The merged company, which will be renamed GoTo, will begin preparing for a public listing in Indonesia and potentially in the US this year, people familiar with the plans told the Financial Times. It will target a public market valuation of up to $40bn, the people said.

The deal will create the biggest privately held technology start-up in south-east Asia and give the group added firepower against well-funded regional rivals including “super app” Grab and ecommerce platform Shopee, backed by Japan’s SoftBank and China’s Tencent, respectively.

SoftBank and Tencent also stand to benefit from the GoTo merger, as respective investors in Tokopedia and Gojek. Other investors that have backed the deal include Alibaba, Facebook, Visa and Google.

News of the merger provided more evidence of how south-east Asia’s fast-growing technology industry is coming of age. Investors have been drawn to the region partly because it has been less affected by US-China tensions. Foreign investment in India, particularly from China, has also run into obstacles.

The merger announcement came weeks after Singapore-headquartered Grab, which offers delivery, ride-hailing and financial services, announced a record merger with a blank cheque vehicle. The deal valued Grab at $40bn, and it will list on the Nasdaq this year.

The US-listed shares of Sea Group, the parent company of Shopee and gaming arm Garena, surged 395 per cent last year.

While Gojek has operations in several countries in south-east Asia, GoTo will have its strongest presence in Indonesia, south-east Asia’s largest economy and the world’s fourth most populous country. The merged entity counts more than 100m monthly active users on its platforms and a total group gross transaction value of more than $22bn in 2020. 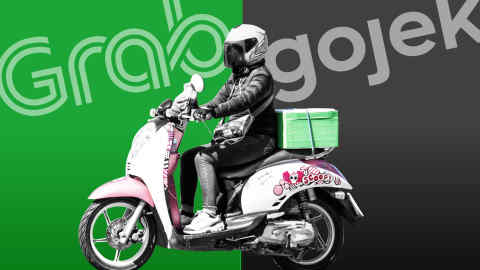 “We have Gojek’s high volume, high frequency mobility transactions, combined with Tokopedia’s high value, medium frequency ecommerce transactions,” said Cao. “GoTo will account for more than 2 per cent of gross domestic product in Indonesia and we’re going to create a lot more employment and income earning opportunities as our company and the economy expand.”

Sea, Grab and GoTo are likely to continue burning through cash to compete across south-east Asia, as all three companies increasingly focus on offering financial services to the region’s underbanked population.

Investors said GoTo’s strength will be its reach across a range of sectors.

“There is no modern internet company, in any part the world that I’m aware of, that has such deep ownership of so many categories at the same time,” said Shailendra Singh, managing director of Sequoia Capital India, which has invested in both companies.

Your crucial guide to the billions being made and lost in the world of Asia Tech. A curated menu of exclusive news, crisp analysis, smart data and the latest tech buzz from the FT and Nikkei