light becomes a sculptural material throughout the diverse portfolio of artist soo sunny park, whose projects challenge the boundaries between sculpture, installation, and drawing. after moving to rural vermont in 2005 — out of an urban area for the first time — park began to perceive light from a new point of view, encountering its qualities and characteristics in previously unfamiliar ways. ‘in the country, changes between light and dark seemed more important,’ she tells designboom in an interview. ‘when sun sets, it is pitch black, because there are very few streetlamps. when driving home from my studio, I noticed how road signs reflected light very intensely, guiding my path.’

it was these new encounters and engagements that led park to a deep interest with light, one that developed into an exploration of liminal spaces — ones that exist between inside and outside, sculpture and drawing, vision and perception, objects and their shadows. ‘I realized that in many ways light is the ultimate liminal being,’ she shares. ‘we don’t really notice light, but everything we see, we see because of light. it’s between us and what we see. I started thinking that the work should push this idea of light as a material in my installations.’ 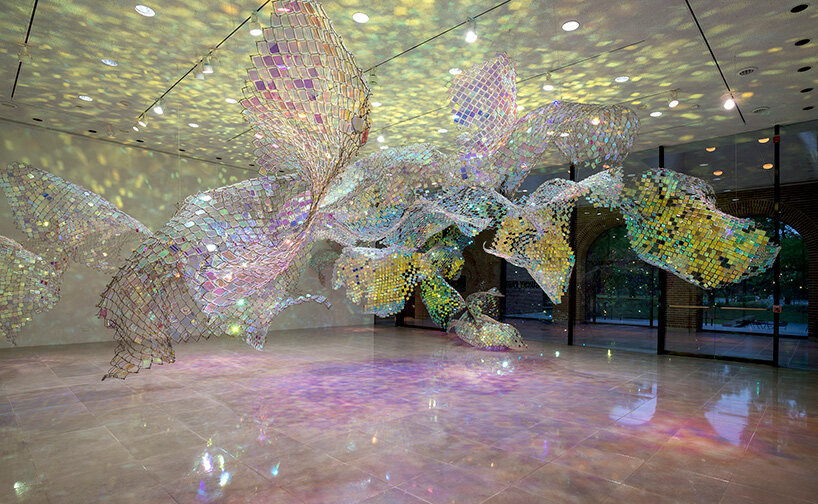 together with light, park works with boundary materials — such as fencing, plastic, glass, and sheet rock — to expand and explore the notion of liminal spaces. ‘I hope to provoke the sense of the physical world and an imagined world coming together, present as one,’ the artist tells us. ‘I hope that this gives people a moment to stop and think about the way we divide our world and the ways in which we might do that differently. hopefully, people will have lots of thoughts about the work that I can only imagine. the point is exploration, rather than offering a specific position on an idea.’

designboom spoke with soo sunny park about the separations and reunifications in her past, pushing the idea of light as a material, and transforming space in unexpected ways.

designboom (DB): what aspects of your background and upbringing have shaped your creative principles and philosophies?

soo sunny park (SSP): my parents emigrated from korea to the US when I was eight, but I could not follow them until I was 11. during that time, I was staying with extended family, and during that stay I almost drowned. as this was happening, I noticed that I felt separate from the world, but also from my body. what could the space between body and mind even be, I wondered? coming to the US was one kind of reunification, with my nuclear family, but also a further splitting, as I had to negotiate a world in which people spoke a language I could not understand. art, for me, has always taken place between spaces, states, and categories. 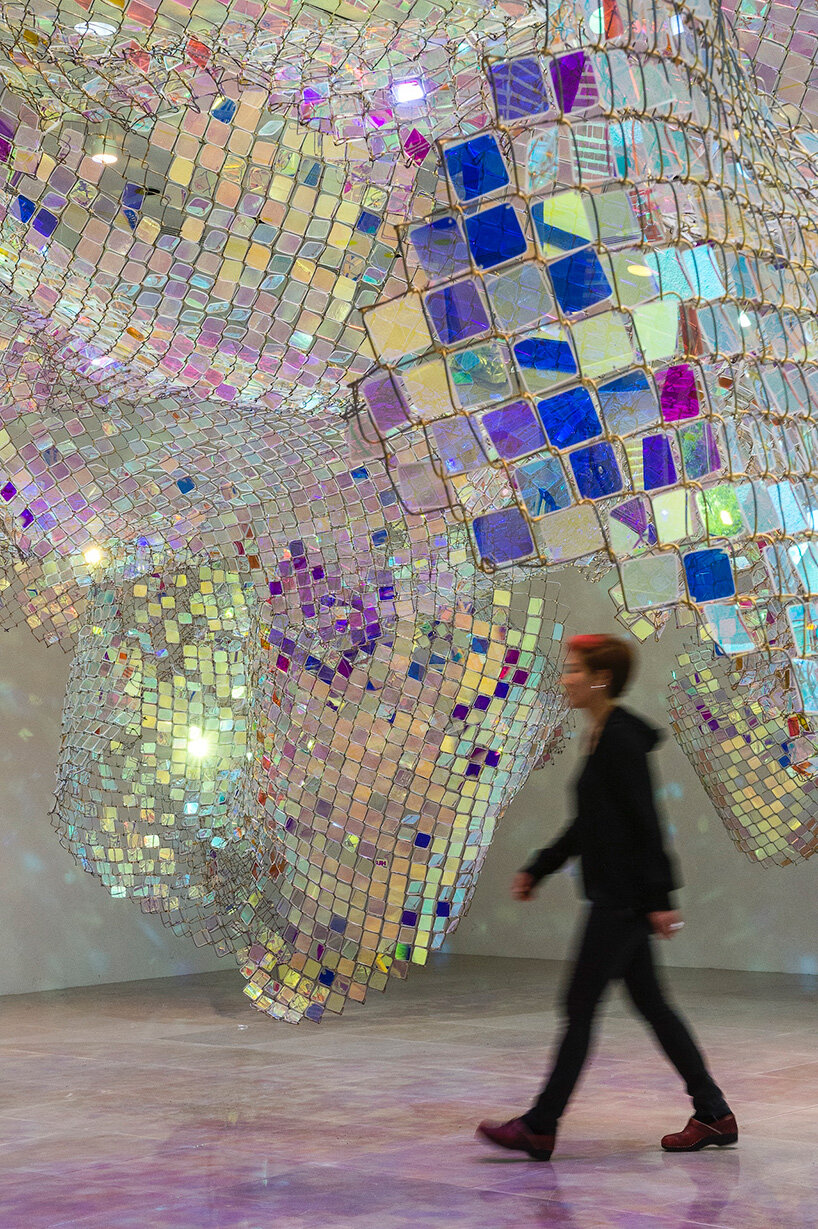 DB: what draws you to boundary-making materials — such as fencing, plastic, and glass — as artistic mediums, and what is their personal meaning to you?

SSP: the separations and reunifications in my past led to me pursuing liminality as a theme in my work. those boundary materials generally exist between spaces: in walls, and windows, or as fences. I want to treat those materials not as space dividers, but as space creators. a fence is welded into a form and fitted with acrylic tiles. many of those forms fill a space and transform it in the process. in my work, these boundary materials do not create boundaries. they become interesting parts of the spaces we inhabit. this lets us look at them, and the spaces we make, in a new way. 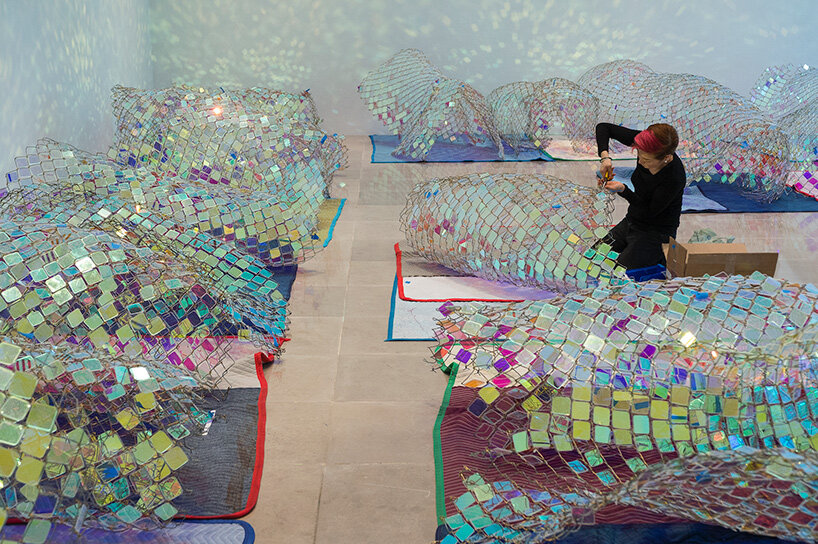 DB: much of your work deals with treating light as a sculptural material — can you talk about the idea of giving form to light?

SSP: I moved to rural vermont (VT) in 2005, while before that, I had only lived in urban places. in the country, changes between light and dark seemed more important. when the sun sets, it is pitch black, because there are very few streetlamps. when driving home from my studio, I noticed how road signs reflected light very intensely, guiding my path. so, I started a series of drawings and photos that had retro-reflective glass beads embedded into their surfaces. at the same time, I was inspired by the snowy hills of VT, where I lived, to shape forms out of fences. SSVT—vapor slide uses translucent plastic cups embedded in welded fencing, strings, and rocks to explore the space between the snow and the rocks below. 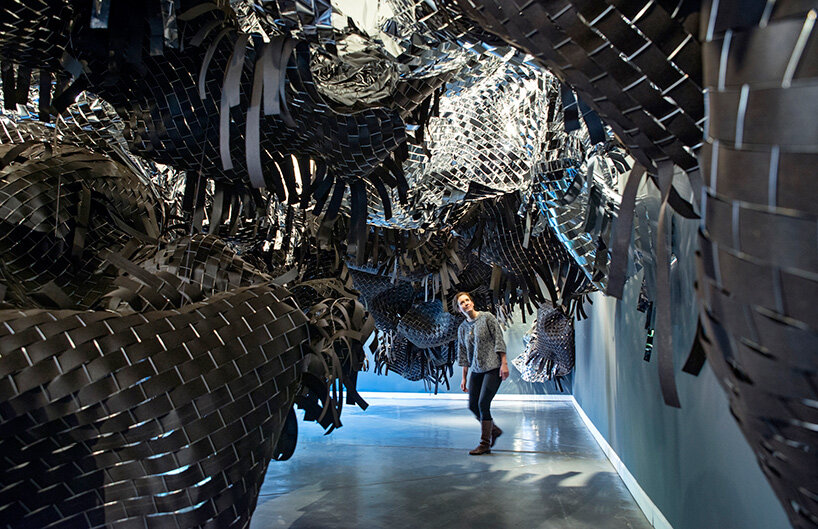 SSP (continued): I realized while working with fencing, glass, and acrylic, or punching holes in paper and drywall, that my pieces transform spaces differently depending on the light, natural or artificial. I realized that in many ways light is the ultimate liminal being. we don’t really notice light, but everything we see, we see because of light. it’s between us and what we see. so I started thinking that the work should push this idea of light as a material in my installations, just as physical as the fencing and glass. other artists, whose work I admire, focused on light, but often by de-materializing the rest of the world. inside a turrell installation like skyspace: twilight epiphany, for example, you are surrounded by concrete but the feeling is one of just seeing patterns of light. turrell focuses us on light by drawing us away from the concrete. I want light to be more like concrete, or fencing and glass, and less ephemeral and ethereal than it’s usually taken to be. it plays its own material part in the installation, alongside these other things. 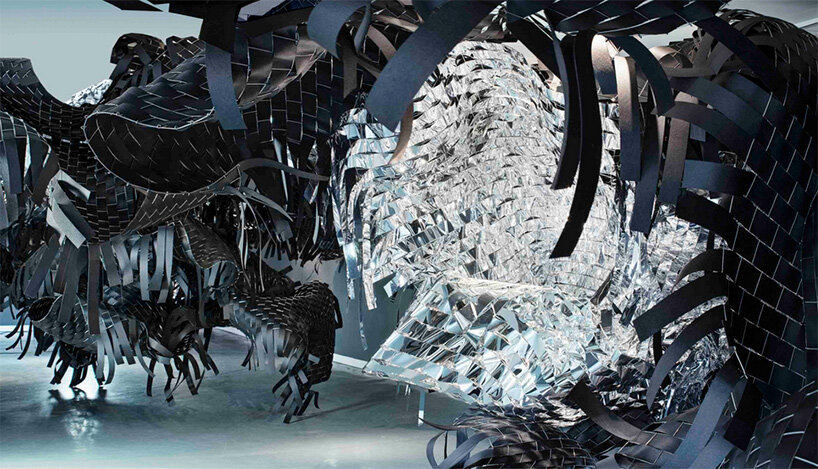 DB: your work operates in a transitional space between sculpture, installation, and drawing — can you introduce your interest in liminal states, and what draws you to this word and space?

SSP: I see my work as participating in the long tradition of studio art, and categories like sculpture, drawing, and installation are part of what structure this studio art space. but like walls made of sheet rock, these concepts also divide this space into parts. I try to use those materials, the concepts, to explore spaces between them. for example, my refraction drawing on table, and a larger work it inspired, boundary conditions, is art, but they are both somewhere between drawing and installation. innovation typically happens between categories, not within them. one way to think about artists is that they are breaking down boundaries between art and non-art, painting and sculpture, etc. instead, I prefer to think about it as devising new things out of the materials left to us by the past. we’re not breaking them so much as reusing them in a new way, just like I’m using fencing and glass to make spaces rather than divide them. 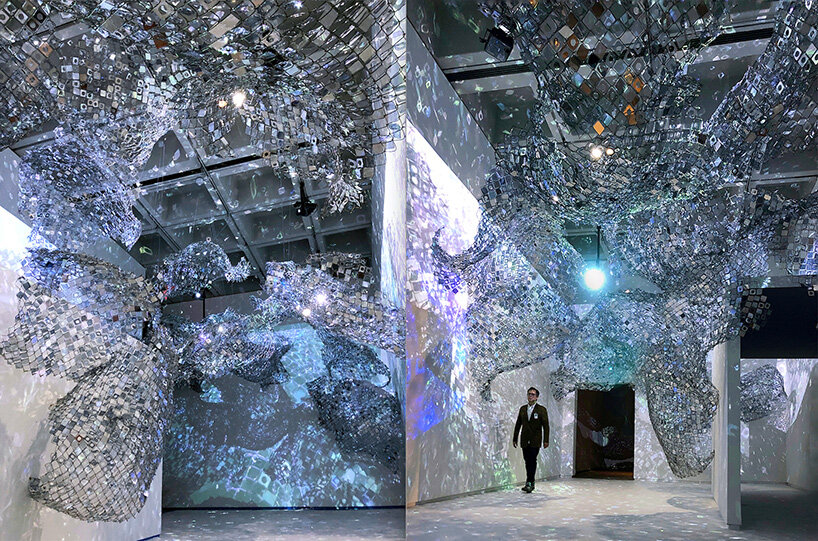 photo-kinetic grid, 2018 at north carolina museum of art in raleigh, NC | image courtesy of the artist

DB: industrial and weighty materials, combined with the ephemerality of light are aspects of your work that appear very complex to realize in sculptural form — which project has been the most challenging to execute? what were the challenges?

SSP: every installation is a unique challenge. when the space is a simple box, the challenge is composing a work out of its components in a way that responds to people. I cannot compose pieces like that ahead of time, so all the work happens on site. but when a space is very challenging, then I need to plan a composition ahead of time, and it can be very difficult to get everything just right, for different reasons. for example, when I installed unwoven light at rice university in 2013, it took two weeks, but that was because all the composing had to be done on site. but when I had installed capturing resonance at the decordova museum in 2012, the space was three stories tall but only about six feet wide. so I had to work with a scale model of the space and each component to compose it ahead of time.

A Swirl of Color: A Watercolor Demo