Invest 90L Headed for Jax and So am I tho I’m headed North on 95 …What will 90L do I10 West or Just Rain Itself Out or Travel UP the Coast? Otherwise Tropics are Super Quiet. (Is this the quiet before the storms of 2021??)

Invest 90L Headed for Jax and So am I tho I’m headed North on 95 …What will 90L do I10 West or Just Rain Itself Out or Travel UP the Coast? Otherwise Tropics are Super Quiet. (Is this the quiet before the storms of 2021??) 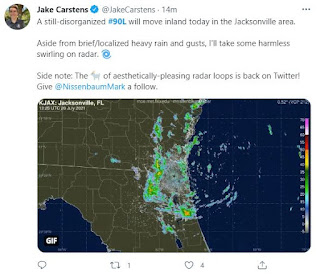 Nice tweet online that is worth showing. It really tells the story. Invest 90L has less convection and severe weather than an afternoon thunderstorm in Miami but it has a weak circulation and low 30% chances of developing. Jacksonville Beach has some waves, there’s been a lot of rain to the South of there but nothing really to write home about.  Note it’s still offshore and land interaction seems to be doing it well so keep watching. I know I am as I drive up into the Jacksonville area. More a swirl with convection but it has an official name Invest 90L but it has low chances of only 30% of actually doing anything. Something to watch, not much else to watch in the tropics. Rather see it from close up than far away as we were going to be in that area today anyway as we are on the road today. 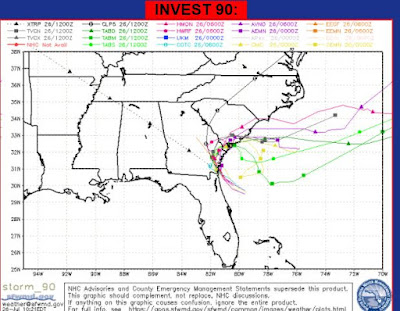 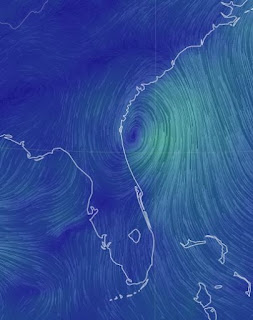 Maybe it will do Savannah??

Not a real story currently..

The real question is where does 90L go? Does it slide up along the coast with part of it over water or does it keep going West across North Florida? It has a defined center but no real weather and models have been horrible trying to figure this one out so I’m watching in real time and hopefully up close and personal as today is a road trip day planned out to be able to look at Invest 90L up coast as we had North. I know where I’m spending the night tonight but does Invest 90L? I’d prefer it to hang a right and head up the coast but no one seems to know but Invest 90L. 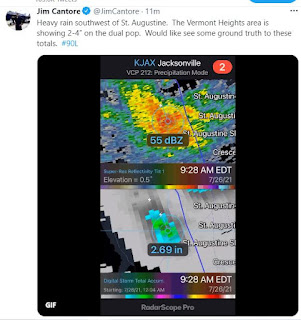 Again it is still far off the coast over water.

Well the center of 90L but will see what we see.

I’ve been on real vacation all weekend trying to catch up with relatives I have not seen in almost 2 years so I haven’t been online much. I am expecting to be in the vicinity of Invest 90L in a little while as today is a road trip day and planned the timing to hopefully see some weather from 90L, however yesterday we were in a strong severe storm with nearby funnel clouds sited and gusts in tropical storm force wind in South Florida so a weak westbound Invest without any real wind doesn’t seem like much but you never know. I say that as often these systems that can’t get it going over the ocean suddenly spin up some decent wild weather over land. I’ve seen that happen often, especially in parts of North Florida so it’s definitely worth  keeping an eye on the weather in North Florida today. That’s why I’m going to be there and have places to go before we sleep.

Nothing of note in the tropics otherwise other than westbound waves and SAL doing it’s thing. It is possible, depending on what happens with 90L that weather could spin up in the Gulf of Mexico but traveling West on I10 later tonight isn’t going to help it go tropical. And the truth is that usually if an Invest doesn’t ramp up fast on landfall it’s one for the history books but seeing as how this began over land in Georgia who knows.

If I see anything on the road worthy of talking about regarding 90L I’ll post and I’ll be tweeting. This was an awesome Miami trip, including a trip down the Keys with my brother for the day, and I’ll miss the kids, my friends, the palm trees and the water but it is what it is and at some point you gotta head North on I95 again and that’s where we are currently in life.

Usually happy to be on the road but it’s a long complicated trip back with several stops and yet some weather to watch will make it more enjoyable as palm trees are in the real view mirror and oak trees with hanging moss welcome me back home.

Song above but pretty sure you know what it is

Here4dBesthttp://here4dbest.com
Previous articleQ&A with Erin Saltman of Global Internet Forum to Counter Terrorism, backed by Facebook and others, on redefining extremism, working with members, and more (Issie Lapowsky/Protocol)
Next articleFlash floods will be more common as climate crisis worsens, say scientists | Flooding

Sam. Down the Road Watch Out! October Surprise Coming!

There should be a Country Song about trofs and hurricanes in September; you know a strong cold front walked into a bar and...