Is ELSA Really 60 MPH or Being Kept There For Continuity and for Forecasts To Verify? It’s a Question. NHC Makes the Rules So Officially It Is. Cuba, then the Florida Keys …West Coast of Florida Close in Cruiser.

Is ELSA Really 60 MPH or Being Kept There For Continuity and for Forecasts To Verify? It’s a Question. NHC Makes the Rules So Officially It Is. Cuba, then the Florida Keys …West Coast of Florida Close in Cruiser. 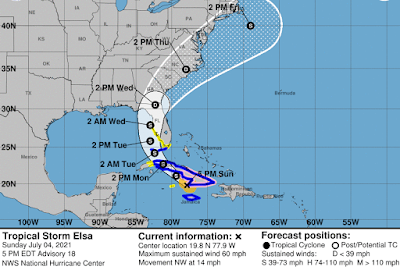 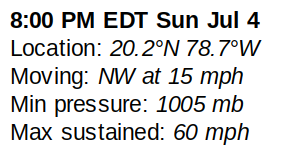 The problem with Elsa is it is currently very disorganized, yet despite how disorganized it is and how high the pressure is that is not correlating with a Tropical Storm …. it has a large ball of convection with a disorganized center moving through the Caribbean on track to impact Cuba, cross Cuba and then what happens in the warm Straits of Florida really tell the tale for her Florida adventure. Once into Florida as she travels across the Southeast she may emerge over North Carolina off coast looking stronger than she ever was……. 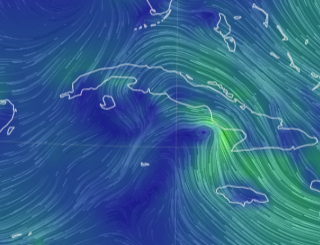 Not the best signature.

Hard to read her handwriting perhaps.

That’s if models are to be believed and the NHC relies heavily on models for guidance so the cone resembles the model tracks. This storm does not resemble a 60 MPH organized Tropical Storm. I’m sorry I’m not buying it. There used to be “rules” “rules of procedure” for naming of tropical depressions (closed, totally) and for upgrades to Tropical Storm strength based on winds in a storms core not winds far removed from the core in a random thunderstorm. For decades these parameters existed and were followed, yet lately they have been thrown by the wayside as if they were moldy bread, and storms are upgraded or kept at some wind speed based on the current procedures at the NHC. No rule book has been published.

A storm was upgraded to hurricane recently based on the concern that perhaps recon missed a hurricane force wind. That would be okay if the storms in the 1950s, 1960s, 1970s, 1980s, 1990s, 2000s and most of the 2010s were being judged by the same guidelines, they were not and that makes the last few years very suspect for data against other storms.

I’ll admit I was all for being more lenient. There was once a tropical wave that looked better than Elsa with strong storms in it about to hit Haiti and the NHC refused to upgrade because they could not find a good westerly wind and it was not a closed off center for TROPICAL DEPRESSION. They issued a Special Statement saying Haiti could have life threatening flash flooding and it did and they were warned.

But this early July Caribbean cruiser looks like a storm, has a nice curved shape and travels together along the existing cone so…. it’s being treated as a Tropical Storm and in theory the circulation will improve and the signature on Earthnull will show a closed center and this is the way it is in 2021. 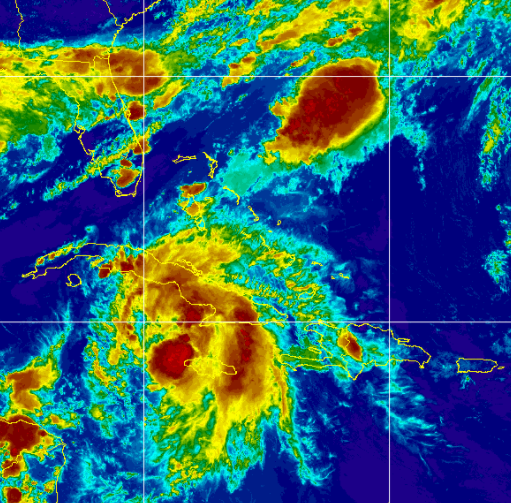 The storm is not the big red ball top right.

But the oddly shaped thing below that.

The typical track for these storms is cross Cuba from the Jamaica Passage where it was all day and emerging off the coast of Cuba into the warm waters of the Florida Straits. At that point it should slide, glide up the West Coast of Florida parallel to the coastline similar to Charley but not as strong as Charley and somewhere probably (but not for sure) North of Tampa near the Big Bend area of Florida. This is a typical July scenario for a weak tropical storm, however nothing has been normal or typical with Elsa. Already several people were killed in the Caribbean as it passed through the Islands back when it had hurricane force winds. It does not now and I doubt the 60 MPH winds are in an area around that tiny center vs squalls moving along with the disorganized systems. It could clip Tampa Bay and then make a second landfall further up the coast. Miami will get rain as they have had every day practically this week; Florida Keys will feel it.

Like looking in the rear view mirror… looking ahead is difficult and do not expect to see then what we see currently so prepare for a minimal tropical storm and be ready to adjust if it’s weak or stronger. 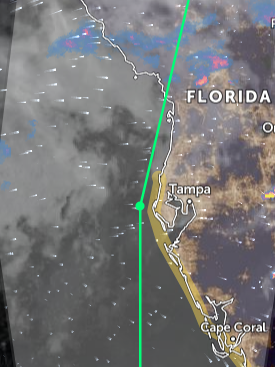 Any deviation in track can impact a different coastal city.

Traveling over a warm pocket of water strengthens it.

That’s a difficult set up.

A close up of the interactive map is above.

Really this can change greatly based on ELSA.

Does ELSA pull it together?

Does ELSA stay alive after Cuba?

Does ELSA slow down and stall?

Does ELSA speed up?

Is that next front so strong?

Let’s wait and see where and how she crosses Cuba.

I’m going to be honest….

But she is according to the NHC

And they make the rules.

I just report them.

I asked Jim Williams from www.hurricanecity.com his thoughts off the record as I know he can think colorfully and he doesn’t hype and he said I can “repeat that …if you wish” so this is what he said.

That’s what he said. I’m trying to be politically correct and report the facts as the NHC gives them. Again what you see in the Florida Straits or at landfall may not resemble the mess she is now but she has to get across Cuba first. So far she’s a long tracker so she plods along.

I’ll update in the morning.

Here4dBesthttp://here4dbest.com
Previous articlePrecious Metals Royalty And Streaming Companies: The June Report
Next articleClimate Sensitivity to CO2, what do we know? Part 1. – Watts Up With That?

The National Hurricane Center is currently monitoring an area of low pressure off the coast of Florida, about 200 miles east of Daytona...