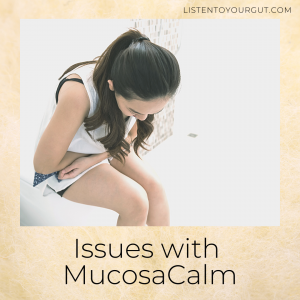 If you experience an increase in symptoms or diarrhea with MucosaCalm, you may attribute your reaction to Licorice. However, you need to keep in mind that the glycyrrhizin component of licorice has been removed from the licorice contained in MucosaCalm. Hence it only contains deglycyrrhizinated licorice (DGL).

Glycyrrhizin is the component that has been “shown to effectively kill Helicobacter pylori strains, including those that are clarithromycin-resistant or metronidazole-resistant.” (1)

So of course, anything that has the ability to kill off pathogens, can then also result in diarrhea as the body flushes these pathogens (and their toxins) from the gut. HOWEVER, MucosaCalm does not contain the glycyrrhizin component of licorice, so it is unlikely to be the culprit if you experience an increase in bowel movements.

So what could it be? From discussion in the LTYG Private FB Group – a number of people discovered that they were sensitive to either the NAG or Slippery Elm. They discovered this by taking single ingredients and testing each.

My assistant Linsy also didn’t tolerate MucosaCalm when she had extreme allergies and die-off (Herxheimer) reactions to just about anything she used to heal her gut. So she used Marshmallow Root only for a while and as her allergies/Herx decreased, she began to use MucosaCalm again (since she knew the ingredients are really beneficial).

As with anything, listen to your gut! You can always just take the individual ingredients you tolerate well and just stick with those.

Here4dBesthttp://here4dbest.com
Previous articleAnthony Davis got injured again, and it’s getting late early for the Lakers
Next articleFear of Losing Health Insurance Keeps 1 in 6 in Their Jobs