This is going to be a jolly quick update as Claudette has already more-or-less dissipated over the Atlantic this evening. Short but sharp was this one! 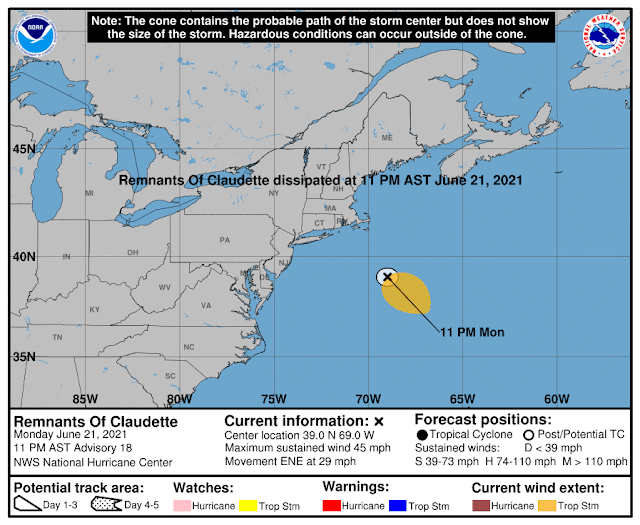 She became a Tropical Storm early this morning but was already being pushed along by a front and was moving forward with speeds of around 28mph – much faster than your usual Tropical Storm. She still has some convection (rainfall) and some circulation, but it’s not as well developed as it was earlier. You can also see the front – extending from Texas to Canada and the rain that is also bringing (colourful parts of this satellite imagery – I’ll explain how you can analyze it in a future update):

Although a relatively small storm, Claudette unfortunately caused some damage and fatalities in the southern states (Alabama in particular, I saw). Any storm that causes multiple deaths or large economic harm has its name ‘retired’ so it doesn’t appear again – storm names are in rotation every 6 years otherwise. This may be the last time we see a Tropical Storm Claudette.

I’ll be back when the next one, Danny, is brewing. Unless he’s only around for a day.

Leading the charge! Can I make it from Land’s End to John o’Groats in an electric car? | Electric, hybrid and low-emission cars

Accel doubles down on 1Password, which just raised $100M more at a $2B valuation – TechCrunch