Well, my friendly White Rabbits in Wonderland! I’m late, I’m late, for a very important date. No time to say hello! But I haven’t forgotten what time of year it is. It has been a bit of a skimble-skamble year, and I have been a little slow to start the Atlantic Hurricane Season but I see that Mother Nature arrived early to the party and is already a bit tipsy. Storm number 3!

The first two storms of the season were a couple of very small blobs on the seascape – Tropical Storm Ana (22-24 May) and Tropical Storm Bill (14-16 June) were in the middle of the Atlantic and both were only around for about 1.5 days (!!). In ye olde days these may not even have been named.

So, here we are with what I would consider the first grown-up storm this year. Now before I get into a proper welcome to the season and what we can expect, here’s a quick Tropical Depression Claudette update…

She popped up in the Gulf of Mexico three days ago as a Potential Tropical Cyclone and was named in the early hours of yesterday morning (Saturday – somewhere between 1-4 am), just as she was making landfall in Louisiana. She was a pretty weak storm at landfall with winds of 45mph, central pressure 1006mb (TS range: 39-73mph). Although she wasn’t too windy, she did bring a bunch of rain with her – mostly on the eastern side of the center.

She is now a Tropical Depression over northeastern Georgia/southwestern South Carolina at 34.2N, 82.5W, and is heading ENE at a pretty good 17mph. Winds have dropped to 30mph, central pressure is 1009mb. Basically, a nice, cool, cloudy/rainy sort of day for those who are in her path. A path that will take her across the Carolina’s and back out into the Atlantic: 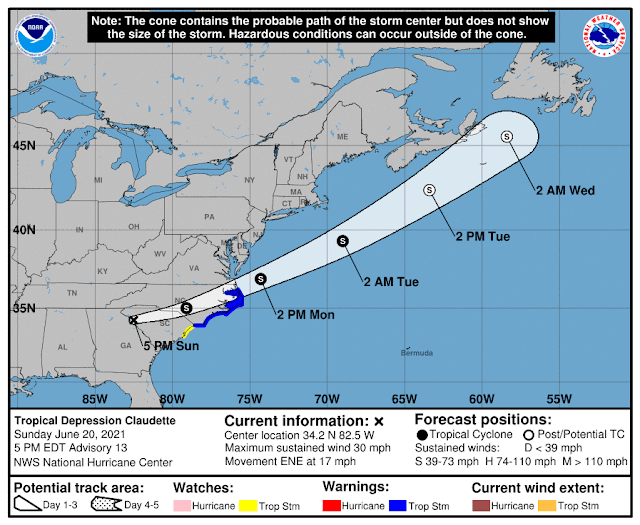 She is expected to pick up some strength, even though she is over land. That’s because she will start to interact with the warm waters of the Gulf Stream, which runs along the coast in the Atlantic. She does have good circulation so, despite the friction over land inhibiting her development, as she gets closer to the coast I think this is quite possible. But with the friction also at play, she shouldn’t get too strong.

At the moment, you can see her clouds from Florida to Delaware:

But there isn’t a lot of convection (rainfall) any more:

Now let’s rewind a bit. Before being named, she was initially labeled a Potential Tropical Cyclone which I hear is causing a little bit of a kerfuffle as it’s not the usual hurricane season lingo. So, to answer the first tropical stormy question I have this year and the first <Jargon Alert!> of the season! Always a thrill! 😉

The reason it’s referred to as a ‘cyclone’ is because that is the scientific term for the type of storms that are called Tropical Storms and Hurricanes in the Atlantic/Caribbean/Gulf of Mexico/Eastern Pacific. In other parts of the world, these cyclones (scientific/lower case) go by different titles. In the western Pacific, they are called Typhoons. In the Indian Ocean, they are called Cyclones (with a capital C).

The reason for the different naming convention based on where they are in the world is historical and geographical.

In the Indian Ocean, in the mid-19th century, a British merchant named Cyclones after the Greek word, kyklon, meaning coil of a snake/moving in a circle. In the Caribbean/Atlantic/Eastern Pacific, the Spanish named Hurricanes after the Carib god of the Taino peoples, Huricán, which in turn came from the Mayan god of wind, storm, and fire. And Typhoons in the western Pacific are most likely named after either the Chinese ‘tai fung’ which means great wind or after the Hindi/ Arabic/Persian ‘tufan’ which means violent storm. <End Jargon Alert!>

That’s enough on Claudette for today. What about the rest of the season? This year, the predictions from the usual suspects are:

And the actual verdict at the end of the season was ‘Very Very Busy Indeed’. 😉 The season had 30 named storms, of which 14 were hurricanes, and 7 were major hurricanes – in keeping with everything else that happened in 2020, the official predictions all underestimated what happened last year. However, there were a few in there I recall that were blobs on the seascape (like Ana and Bill this year) and wouldn’t have been really picked up or named in years gone by. So, although it was busy, our data and observations are also improving and we are identifying more storms in general. This prediction game is really just that, a game – a very rough estimate. Our science isn’t good enough yet to predict very accurately for the entire season ahead.

But we already have a land-falling storm, and I expect we will have more. In case you are still working out what you need for hurricane supplies, here’s what I use (even though I now live in Los Angeles)… water, wine, ice cream, a good book to read, wine, some candles, more ice cream, a radio (soothing classical music perhaps?), batteries, some more wine, mosquito repellent, and lots and lots of cans of lychees, gin (and tonic), and lychee liquor for the lychee martinis (because fruits and good for your health). In the 2020 special edition addition (grin): face masks, hand sanitizer, wipes. You can ditch the ear plugs this year because the billions of cicadas have made their appearance. Phew, cross that off the list for the next 17 years.

And finally, if this is your first start-of-the-season post, here are a few key pointers about this blog…

1. These updates are about fun, forecasting, and education… and tropical storms (and whatever else pops into my head that may, with some imagination and possibly after a glass or two of wine (or lychee martinis), fit those three words). It is just what I think.

2. I have a British sense of humoUr… you have been warned. There will be random letters in words when you least expect them. But less random than if this was in Welsh. Or Irish (Gaelic).

3. This is my hobby – sometimes you’ll get one update a day, sometime four. If you are really lucky, you won’t get any. If you wish to pay me to write, let me know. I’m sure there is an AI out there by now that can take over.

4. I hope you like Monty Python, Eddie Izzard, The IT Crowd. And other Funny Stuff.

5. If you have any questions (preferably about tropical storms), please ask. I will be happy to make up the answers for you. I can also cut and paste from previous entries (I’m very talented) so if I say something or use some “scientific jargon” (always thrilling!), please ask me about it.

6. I often write tongue-in-cheek, which sometimes hurts my cheek but what can you do? Gentle sarcasm, irony, and puns are all perfectly acceptable forms of communication. Unfortunately, they don’t always translate in writing so please don’t be offended – like Planet Earth, I’m “Mostly Harmless” (Douglas Adams). Have a piece of chocolate or a soothing cup of tea instead.

7. I’m sure every cloud in the Atlantic is exciting to some but, unless I’m bored, I’ll usually write about those that I think are important.

8. Despite what you may have heard, I am not always. But then neither is anyone else. Forecasting is complicated. Sometimes the crystal ball gets smudges and you are all out of Windex to clean it and the store is closed. So PLEASE pay attention to the National Hurricane Center, National Weather Service and your Emergency Managers – especially when a storm is looming because they have the most up-to-date information!!

9. I confess I am a twit. I am on twitter (@jyovianstorm). Twitter is cool sometimes. Just like bow-ties are cool (Dr. Who). And Science Fiction is cool. And ice in a G&T is the coolest of all. I will post these updates on Twitter, but I’ll also tweet about storms in other basins, my job (including live dives exploring the deep sea – ooh, ahh!), my movie, other people’s jobs, other people’s movies, cool science, goofy things etc. so if you want to catch up between updates, that’s the place to lurk.

10. I will refer to ice cream, wine, cheese, cups of tea, and lychee martinis fairly frequently. To preemptively answer your questions, I do eat and drink other things for a balanced diet. For example, prawn cocktail crisps, fruit & nut chocolate, water, G&Ts.

And I think that’s about it for now. Oh, and current hits on the website are now > 300,000!! Thank you for being such intelligent, good-looking readers with a really great sense of humor.

I know this was a long update but I’ll be shorter next time. Well, actually, at 5 ft in height, I’m short all the time really… ;-).

Happy Summer Solstice to all! And Happy Father’s Day! Until tomorrow!