Not much time for dilly-dallying today I’m afraid, so I’ll just jump right into the fray (after I’ve had a sip of wine of course – priorities! ;-)). 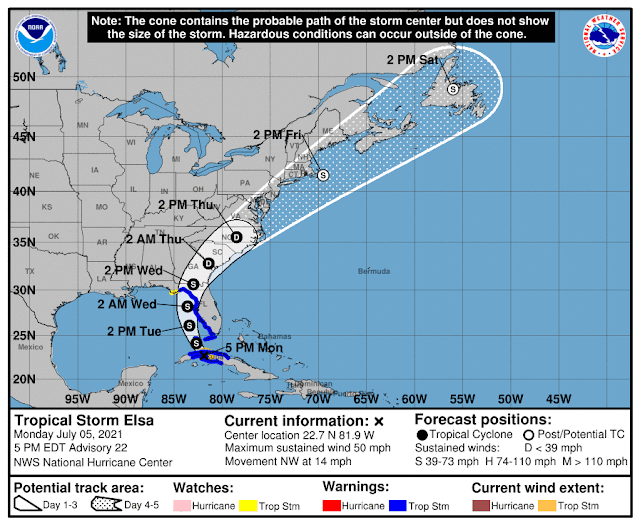 She continued to stay on the southern (now western) side of the cone of uncertainty which is why the track is taking her to the northwestern part of the Florida Peninsula/Big Bend region. But this track also means she is crossing the narrowest part of Cuba, so she won’t weaken too much.

She is currently officially a weak Tropical Storm with winds estimated to be 50mph, central pressure 1004mb (TS range: 39-73mph) but they can’t fly planes over Cuba so we don’t have great data to verify that. They will fly a plane into the storm once she gets back into the Florida Straits to get a proper data update. Currently she is dumping a bunch of rain over parts of Cuba and the Cayman Islands:

I think she may be a little stronger than the official forecast, but I agree with the NHC that she will most likely be a strong Tropical Storm (or very weak cat 1 storm) with winds around 65mph when she makes landfall. There are a couple of reasons she won’t continue to increase in intensity once she is in the Gulf of Mexico. First, although she is going to be going over warm sea surface water, it isn’t very deep and only the upper 50-75m is warmer than 26 deg C – this is important for storms because as they go over water, they churn it up and if it the warm water isn’t very deep, they eventually churn up cooler water. And second, there is a bit of wind shear which will help to keep her in check.

For those along the west Florida coastline, watch out for storm surge as she spins by you. Storms are low pressure systems, and in the northern hemisphere that means water is pushed in an anticlockwise direction (or counter-clockwise if you prefer) around them. As Elsa goes by she will be pushing water onto the coast (and of course, if she is to the south of you, she will be helping water to move off the coast). And my other handy hint is that if she does stay in the center of that cone and makes landfall in the Big Bend region of Florida, there will be very high water levels (a few feet) in the Cedar Key area, so be prepared for that!

Finished the wine, so I’ll wrap up for now. Tune in tomorrow for more ramblings from moi (with some data and possibly an ice cream reference thrown in for good measure).

Here4dBesthttp://here4dbest.com
Previous articleDomo: No Catalysts To Take It Higher
Next articleEurope faces global scepticism about its carbon border tax – Watts Up With That?

Invest 90L off the SE Coast. 30% Friday AM Invest 90L has been tagged off the coast of Florida just to the SE of...