Another a busy day today but I have my glass-o-wine, so jumping right into the fray…

It’s currently at 23.8N, 84.5W heading NNE at 9mph. It’s made that u-turn and is now on the northward track with landfall on the west Florida coast on Thursday. I have to go with the NHC track, but we are still over a day from landfall (they are usually far more accurate at one day before landfall), so remember to keep an eye on the cone – it could go anywhere in that area – and the track can still change and shift some more. I don’t have the same good data that I used to be able to access, but I’d be prepared for it to move towards Tampa Bay (of course, now I’ve said that it will go the other way, won’t it? ;-)). 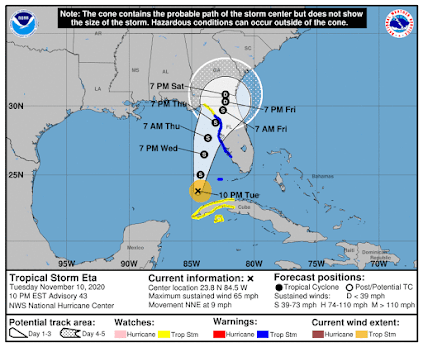 As expected, it is a strong Tropical Storm with winds of 65mph, central pressure is 992mb. I think it’s actually a cat 1 hurricane now though as we can see a very small eye in the satellite imagery that’s coming in and out of focus:

This suggest that winds are somewhere in the 80-90 mph range. The outer bands are back over the Keys and it looks like a lot more rain this time around.

There is some vorticity throughout the troposphere, but it’s not very cohesive – the lower level is offset from the upper level. This indicates that a little wind shear is in play, which we can also see in the satellite imagery as there are more clouds are fractionally greater on the eastern side of the storm. But it looks like the wind shear is dying down, alas, so that won’t be inhibiting this for the next day at least.

It is moving over water that is just over 27-28 deg C in temperature, which is enough to keep this storm going. At the moment the upper ~100m of the water is warmer than 26 deg C, however, by the time it gets off the southwest Florida coast (by tomorrow evening) the water will be a little cooler (still over 26 deg C), but the warm water won’t be as deep so that means there shouldn’t be any rapid intensification and it may actually weaken before landfall.

There is some dry air to the west and in the lower levels of the storm, but it’s not yet clear if this will be enough to slow the storm down in the next 24 hours.

So, if I were still living in St. Pete, I would get ready for a cat 1 hurricane. The hope is that it will be weaker, but there are a couple of competing influences. 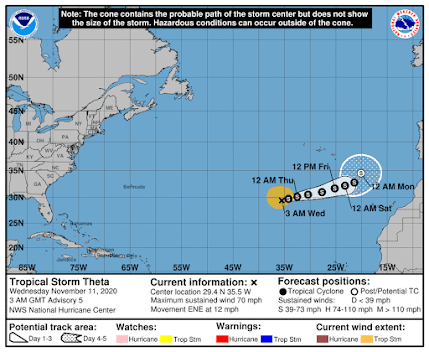 Winds are officially 70mph, central pressure is estimated to be 989mb – this officially makes this a very strong Tropical Storm (TS range: 39-73mph) and almost a cat 1 hurricane. But as I said yesterday, this does not have the vorticity structure of a tropical storm in the troposphere but is rather a segment of a low pressure front.

The satellite imagery shows some circulation (but we see that in the winter months with low pressure systems anyway) but with very little convection:

It may try and develop some more tomorrow, but I don’t see any reason why as the water temperatures are cold and there is a lot of wind shear.

That’s it for today. I’ll be back tomorrow – and I’m sure you are ready in Florida… wine, ice cream, wine, more ice cream, candles, a radio with batteries, a good book or two etc. Remember to listen to your Emergency Managers!

DISCLAIMER:
These remarks are just what I think/see regarding tropical storms – not the opinion of any organization I represent. If you are making an evacuation decision, please heed your local emergency management and the National Hurricane Center’s official forecast and local weather service announcements. This is not an official forecast. If I “run away, run away” (Monty Python), I’ll let you know.
————————————–