I went into my office today for the 3rd time in a year-and-a-half. Goodness, me it’s exhausting, isn’t it? All the morning palaver – finding matching clothes, packing lunch, wearing shoes. Phew. Remind me to not do that again for a couple of days! 😉 Time for a quick(ish) update today, but one that includes a word (or two or three) on Hurricane Linda in the Pacific too.

She has cleared Jamaica and is now south of the Cayman Islands at 18.4N, 79.2W, heading W at 14mph. She stayed on the southern edge of the Cone of Uncertainty and to the track has shifted a little southward: 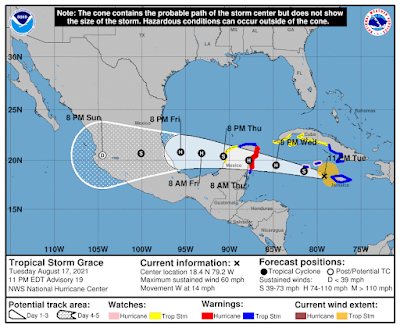 I think they more-or-less have the track with that cone now. There is still a chance she’ll shift a little more to the south but again, it’s within the cone.

Winds are officially 60mph, central pressure is 1000mb, which makes her a mid-size Tropical Storm (TS range: 39-73mph).  The forecast has changed and the NHC expect her to be a Hurricane before reaching the Yucatan Peninsula – I agree with this. Her convection isn’t as strong as it was at this time yesterday, but that’s because she is still interacting with Jamaica:

Once she moves away, that will improve. She does has some good circulation though, which we can see in that lovely outflow pattern in the clouds but also in the vorticity fields. Actually, her circulation (vorticity) is very good in the lower half of the troposphere and is increasing in the upper levels as well now, which is an indication that she is heading towards hurricane strength. She’s not quite there yet though so I also agree with the NHC in their current estimate of intensity. I think there is a chance that she’ll be a Hurricane by late Tuesday – unless her center passes directly over Grand Cayman.

He’s currently at 30N, 65.1W heading WSW at 8mph. He’s decided that Bermuda is just too difficult to find in the Atlantic, so he’s planning to go to new pastures… 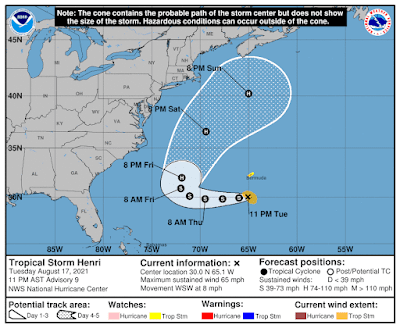 I don’t have much information on track (alas), but I think he may also take a path that’s on the southern side of the Cone of Uncertainty for tomorrow at least.

Winds are currently estimated to be 65mph, central pressure is 998mb, which makes him a mid-to-strong Tropical Storm. I have to say that I don’t think Henri is stronger than Grace – they both have the same vorticity structure, but Grace is much bigger and has more convection. The water is warm under Henri, but not as warm as that under Grace, and waters warmer than 26deg C certainly aren’t as deep in that part of the Atlantic as they are in the Caribbean. Henri is also facing a toot of wind shear, but also has a bit of dry air. But at least we all agree that they are both Tropical Storms.

Remember I showed you the vorticity structure of Hurricane Linda a few days ago – she was just on the left side of the map and was a major cat 3 at the time? Well she is still in the Pacific but winds are now a little lower at 105mph and a central pressure of 975mph, which makes her a cat 2 hurricane (cat 2 range: 96-110 mph). I’m including her because she is at 17.9N, 129.5W, heading W at 12mph and her forecast track takes her just north of Hawaii and I got peeps there! 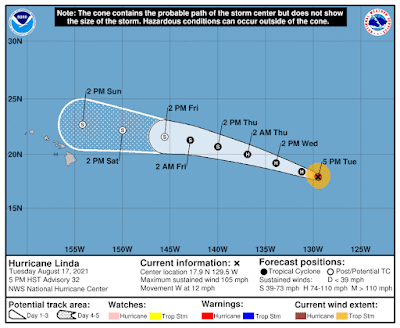 The track looks good at the moment as far as I can tell. And it looks like they have the intensity in the right area – there is a well developed eye, but the storm itself is not quite circular even though there is a lot of convection (including thundery weather) which means the overall structure is not as robust as we see in major hurricanes (cat 3 and higher):

The forecast is for her to weaken over the next few days, so she shouldn’t be too much of a bother to Hawaii but I will check in on her tomorrow to make sure she’s not having a wild time.