We’re longtime admirers of British designer Lee Broom and while London is the city he calls home, he spends a lot of time in New York City for both work and pleasure. Wanting a place to return to in the evenings after long, hectic days, Broom acquired a duplex apartment occupying two floors of the White Street in Tribeca. The light-filled penthouse spans 3,000 square feet giving him a spacious backdrop to work with, as this project marks his first interior design project since 2015. While Broom is primarily known for his modern lighting, he was inspired to design an entire collection of furniture and accessories just for the penthouse, all of which will be launching this year. The space evokes a sense of welcoming calm while perfectly exhibiting his impeccable aesthetic seen through beautifully curated vignettes. “The thing that appealed to me about this penthouse was that, rather than being one expansive space, it had many different rooms and areas to explore, which gave me the opportunity to create vignettes within each space that all have their own personal style yet still work within an overarching design scheme. This is in contrast to my apartment in London which is very open plan,” says Broom. 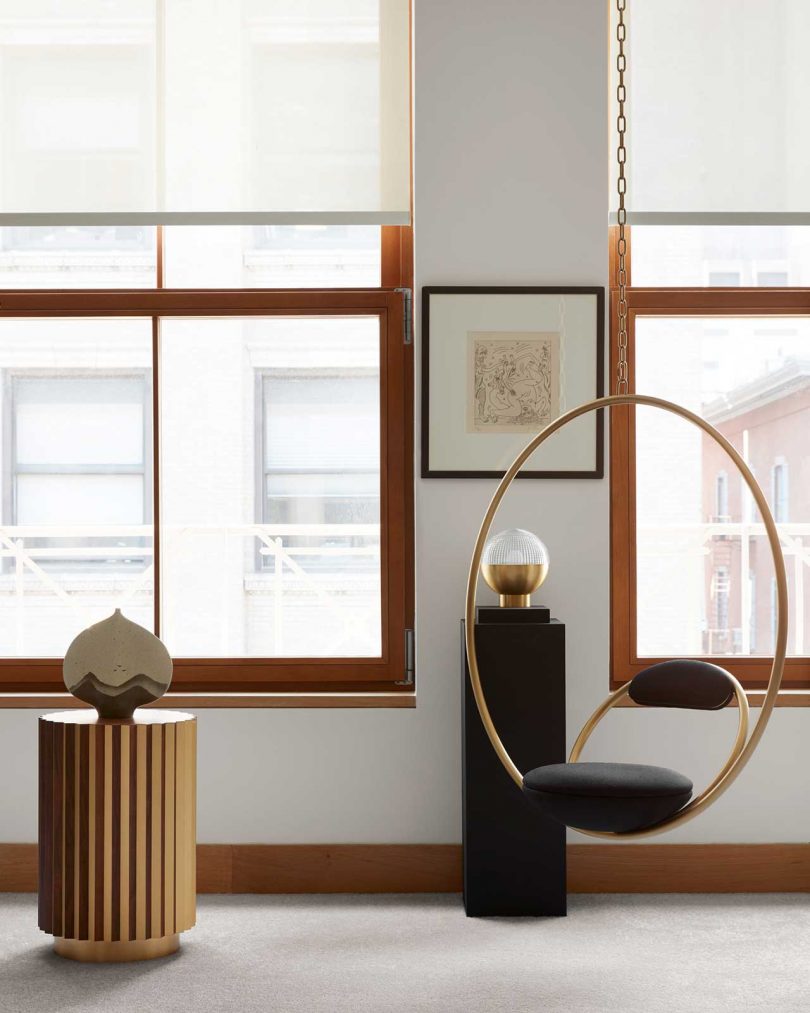 A Hanging Hoop Chair in brushed brass and black Kvadrat wool hangs near the windows, perfect for gazing out into the city. If the chair looks familiar, you might remember Beyoncé swinging in one in her ‘Already‘ video from her ‘Black is King’ visual album. 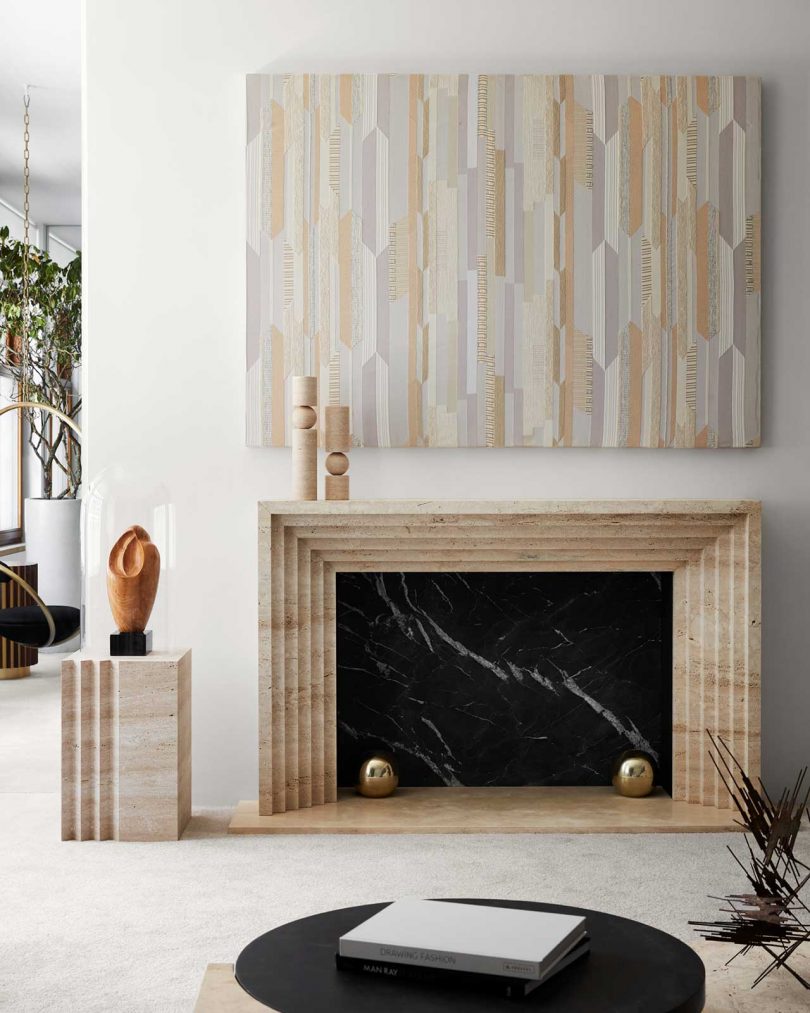 This particular apartment really appealed to me – it is a light-filled, 3,000-square foot space, with expansive high ceilings and flowing natural light. The whole building had already been extensively and sustainably restored, so from a renovation perspective the treatment was more cosmetic, however we added some new structural details such as the chimney breast and fire surround and removed doors and archways to open up the space. 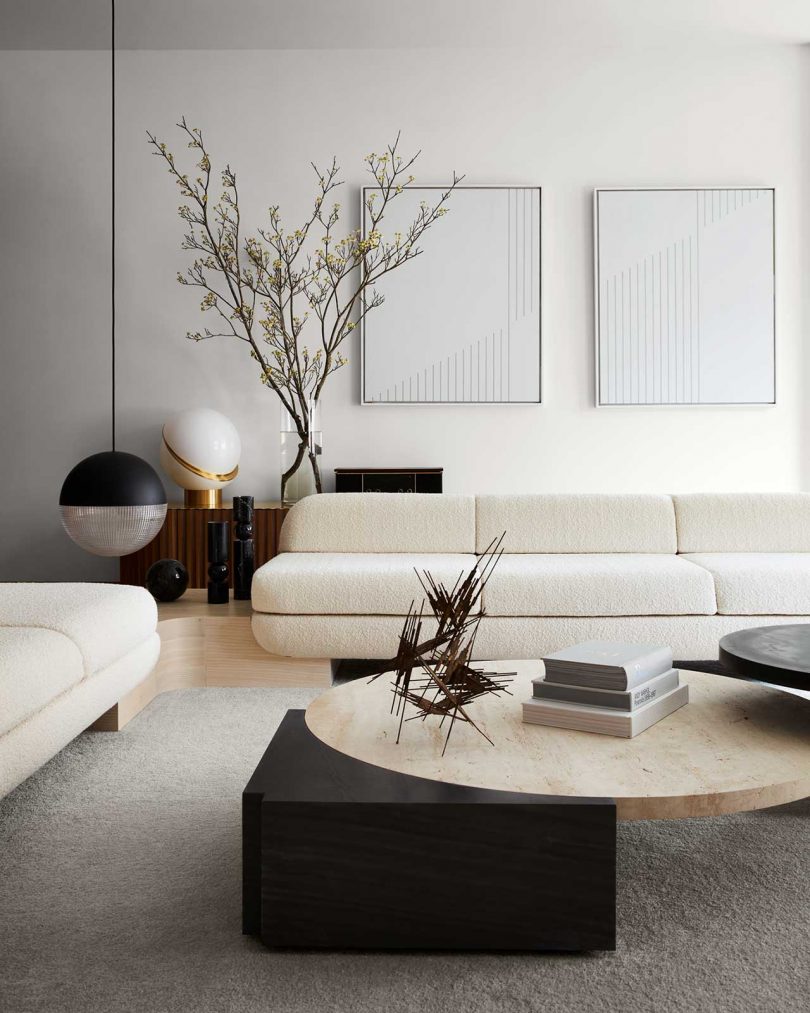 The living room features a monochromatic color palette accented with brushed brass, gunmetal and matte black. “The focal point of the living room is the new White Street sofa designed specifically for this environment. It is an architectural, streamlined, modular piece which can be arranged in multiple configurations and is connected by sculpted armrests, corner and side tables, each produced in white or black ash wood,” shares Broom. “The sofa fabric is a soft ivory bouclé which is a nice contrast to harder, wooden end sections. And with its expansive and curved back, the sofa appears to almost float, anchored only by its connectors. It’s all about balance.” 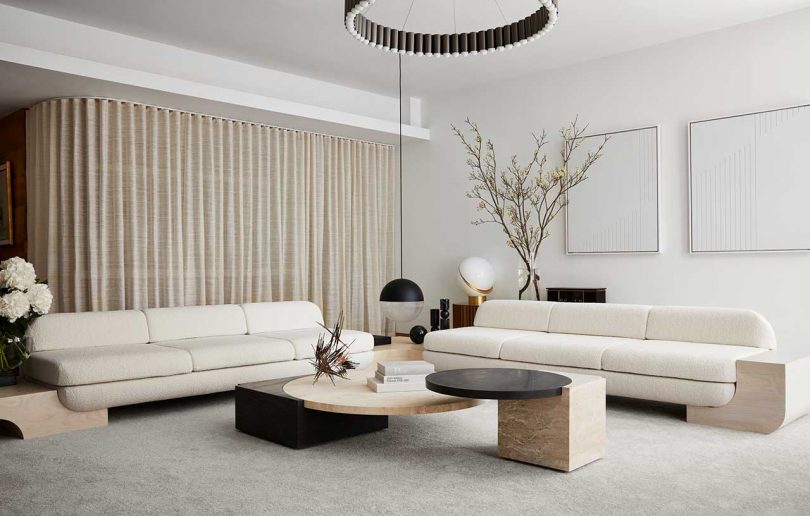 Throughout the living room, various Lee Broom lights are incorporated, including the Carousel XL chandelier in polished gunmetal, Lens Flair in matte black, and Crescent table lamp. “Also showcased in this room are the new Tribeca Tables, a series of sculptural side and coffee tables, which mirror the same floating concept as the sofa, appearing to defy gravity. Crafted in black silk marble and travertine, its smooth round tabletop cantilevers over a monolithic square base, balancing perfectly,” says Broom. “The tables also have a stepped detail that reflects the local architecture, in particular the Long Lines building, a 1970s brutalist skyscraper that is visible form my apartment.” 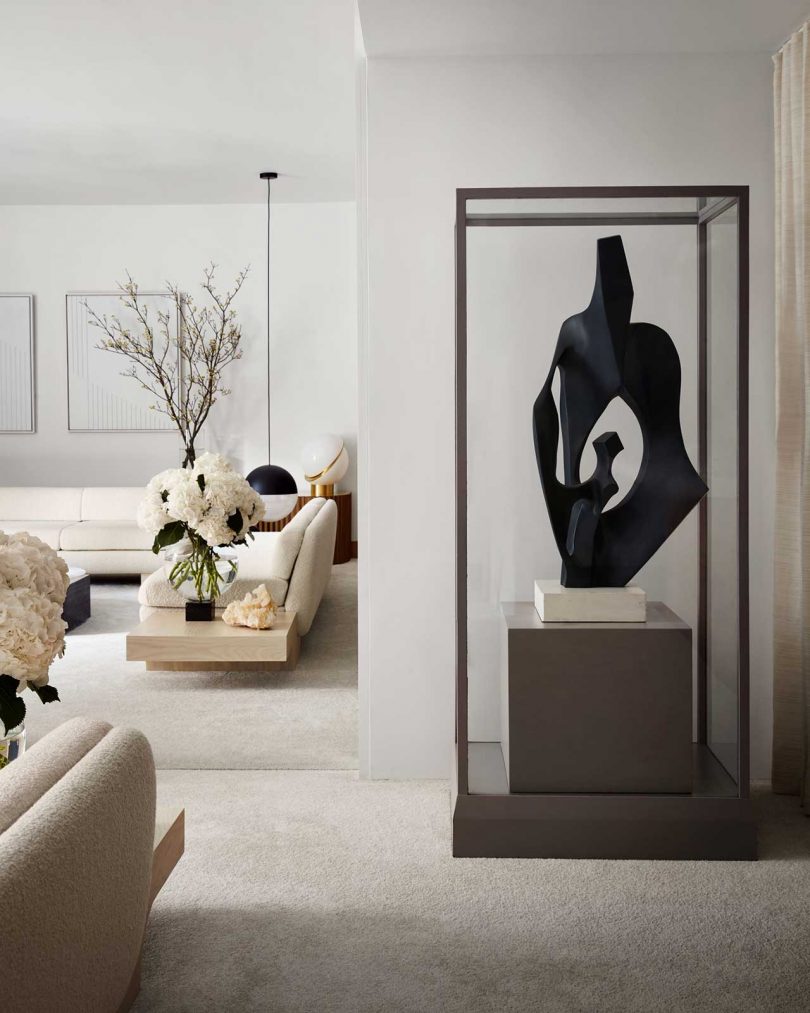 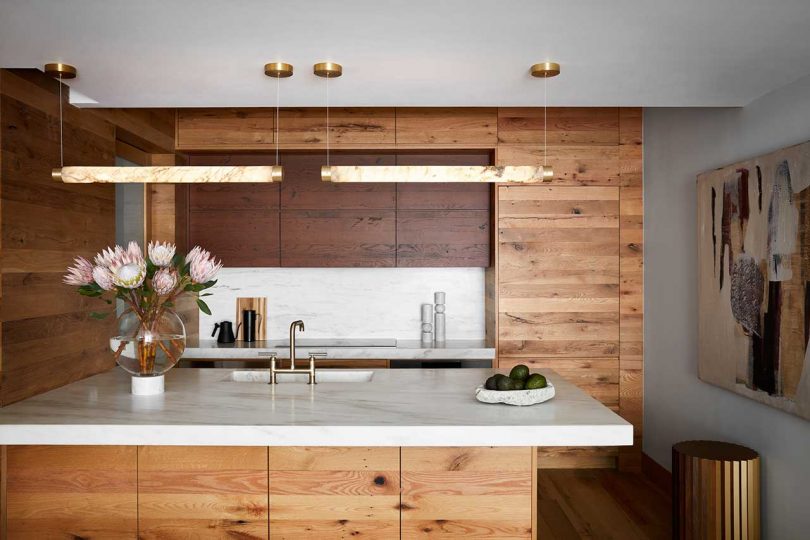 Refraining from typical pendants that hang above kitchen islands, Broom displays two Tube Lights in Carrara marble and brushed brass. Keeping to the building’s commitment to sustainability, all of the wood used in the kitchen is over 300 years old and the marble is from Vermont’s underground marble quarry. 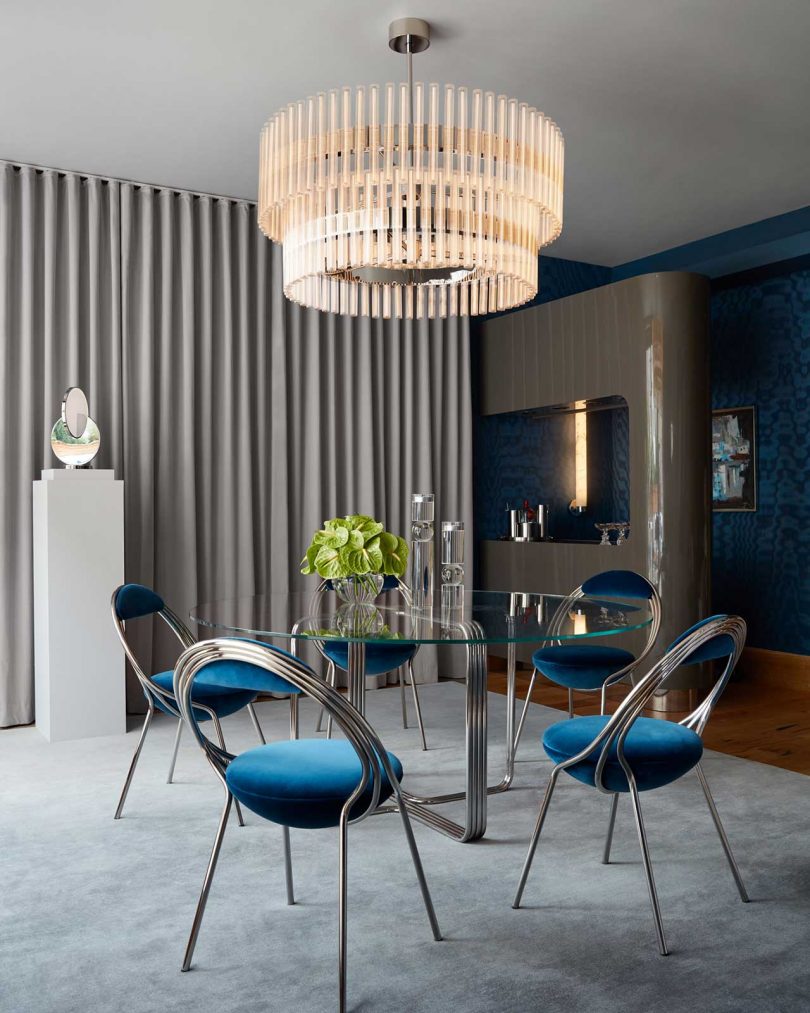 With views of the terrace and One World Trade, the dining room is decked out with dramatic blue moiré walls and grey velvet pleated drapes, alongside polished and brushed stainless steel accents, like the new Lee Broom Musico chairs and circular Musico dining table. 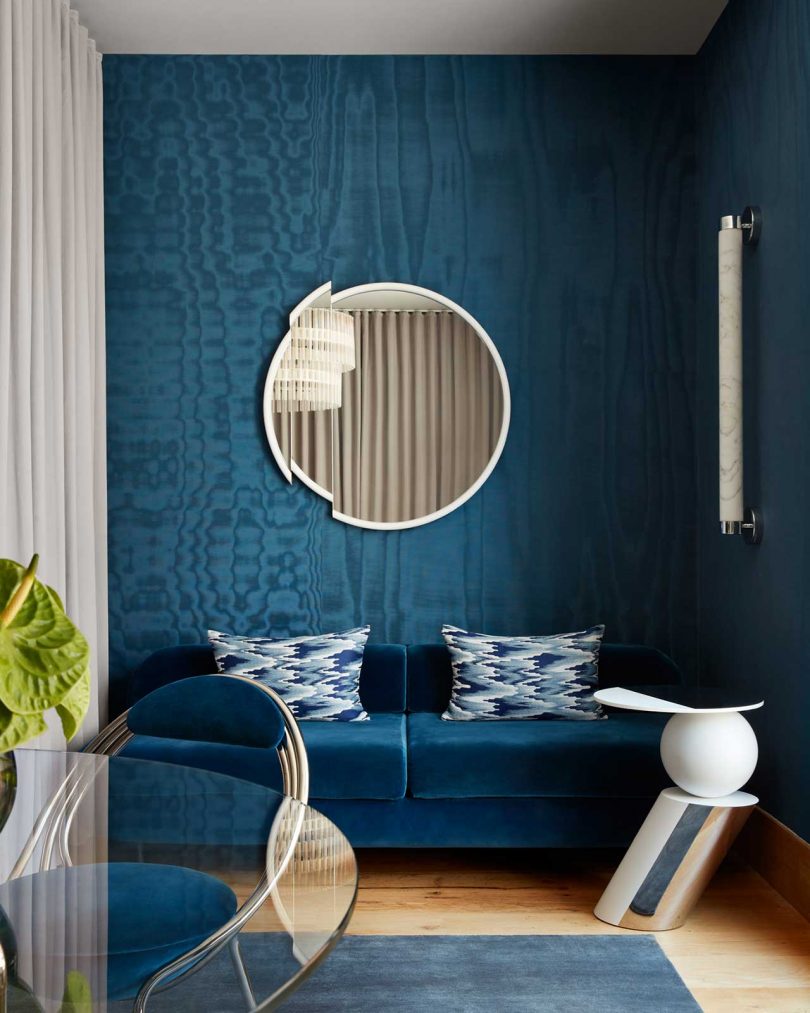 A white Split mirror and Drunken Side Table accent a seating area in the corner of the dining room. 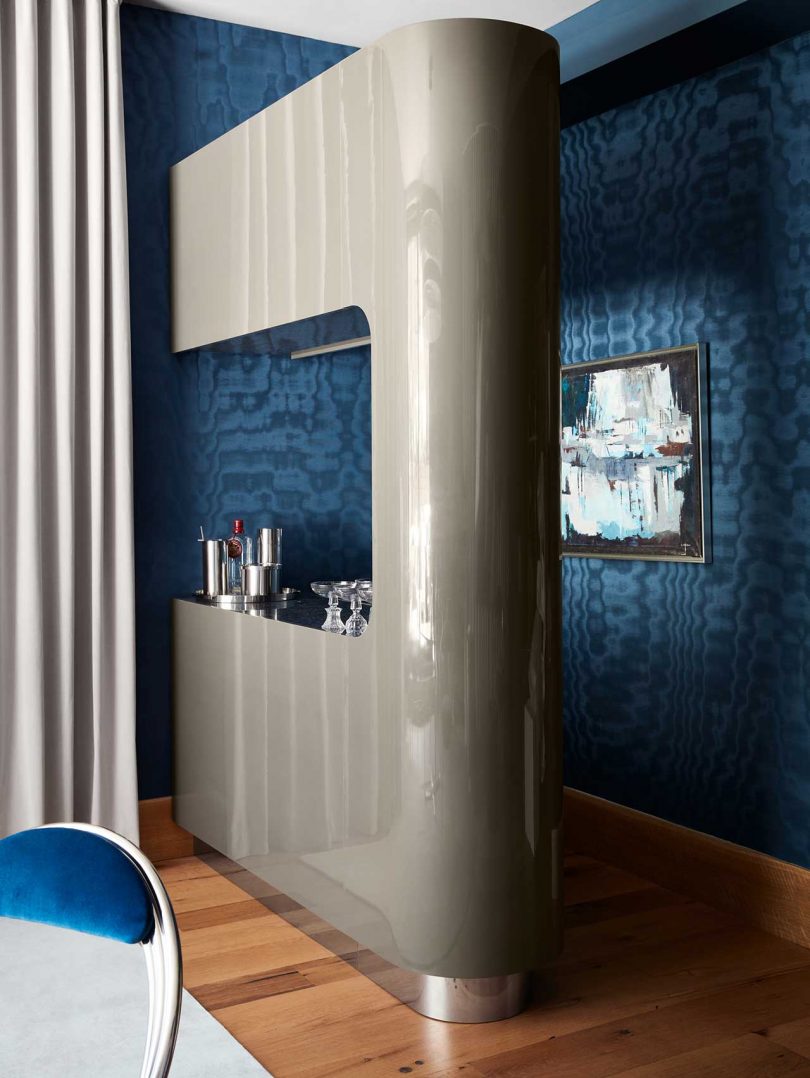 A vintage bar from the 1980s that was custom designed by Steve Chase for the Chase Residence in Laguna Beach, California, finds a new home with Broom. 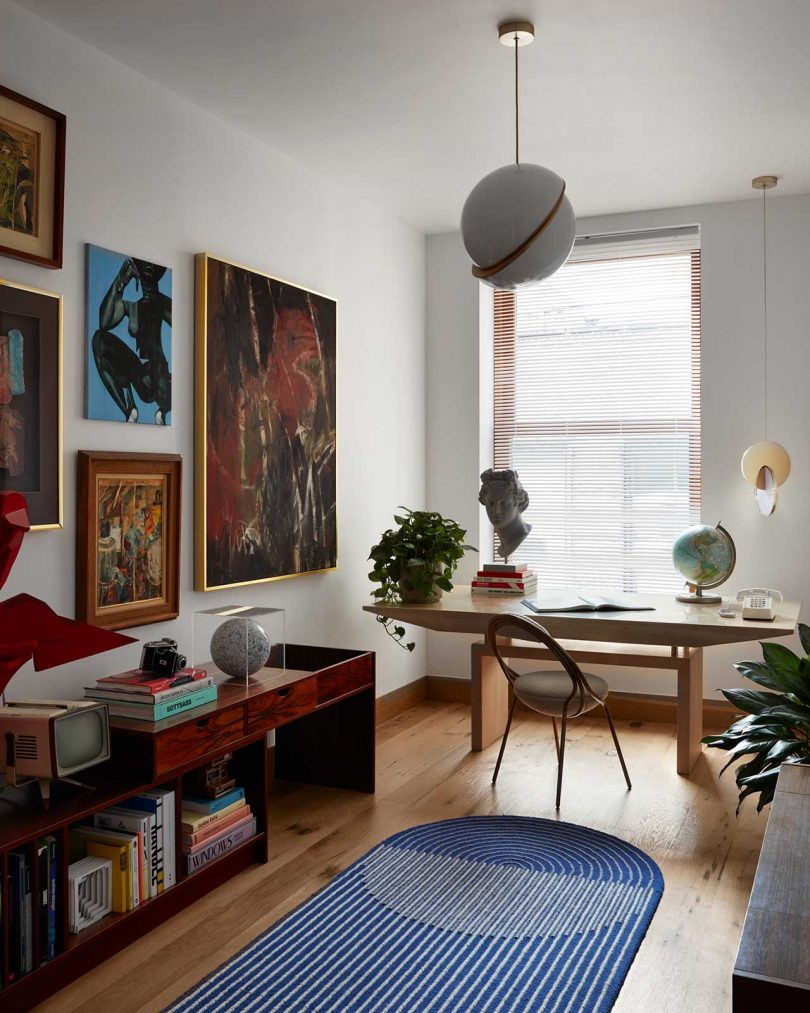 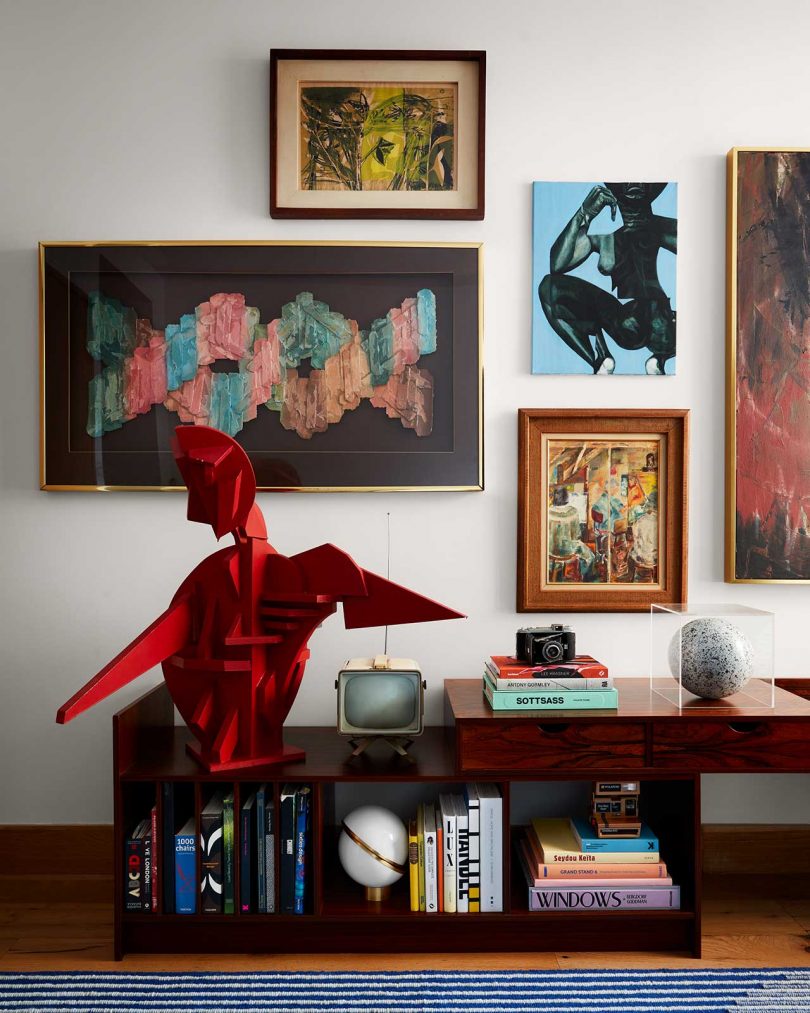 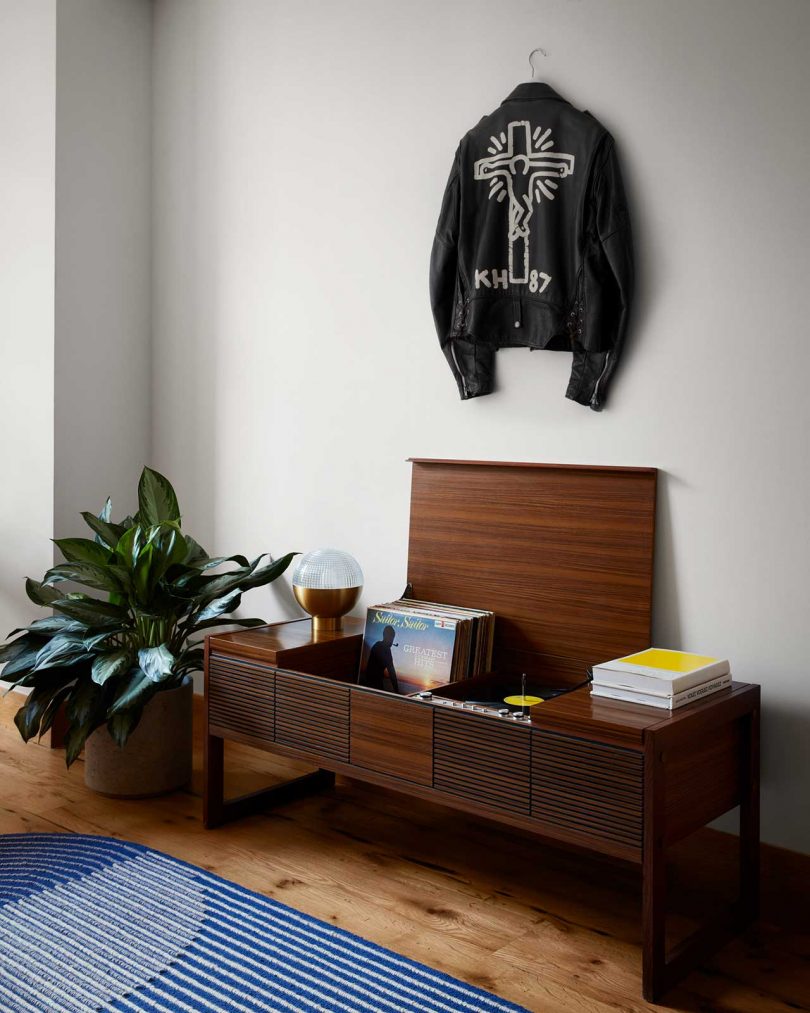 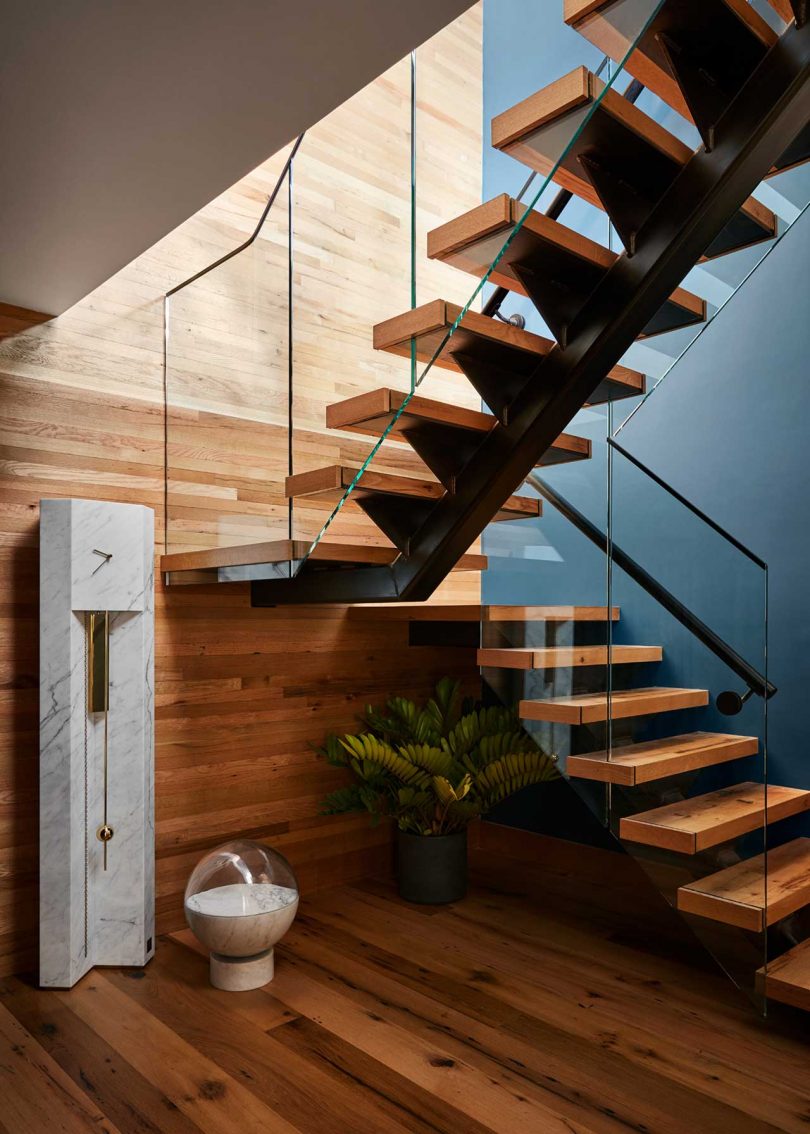 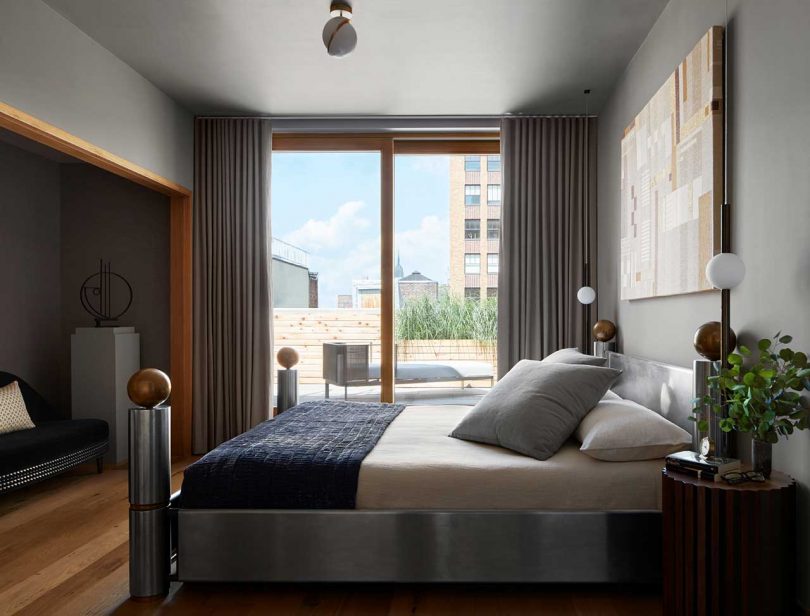 A vintage 1960s bed made of stainless steel and brass ended up being too large for Broom’s home in London but luckily it’s perfect for his primary bedroom in New York. 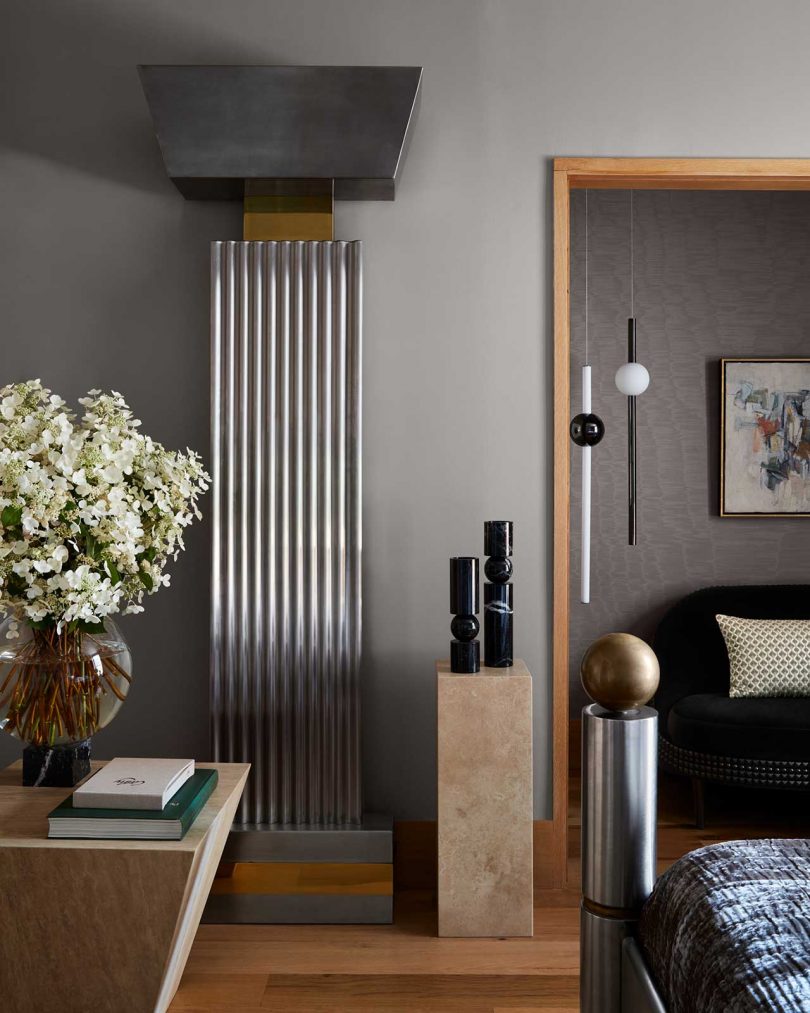 Orion Lights in polished gunmetal hang above an archived sofa Broom designed in 2011. 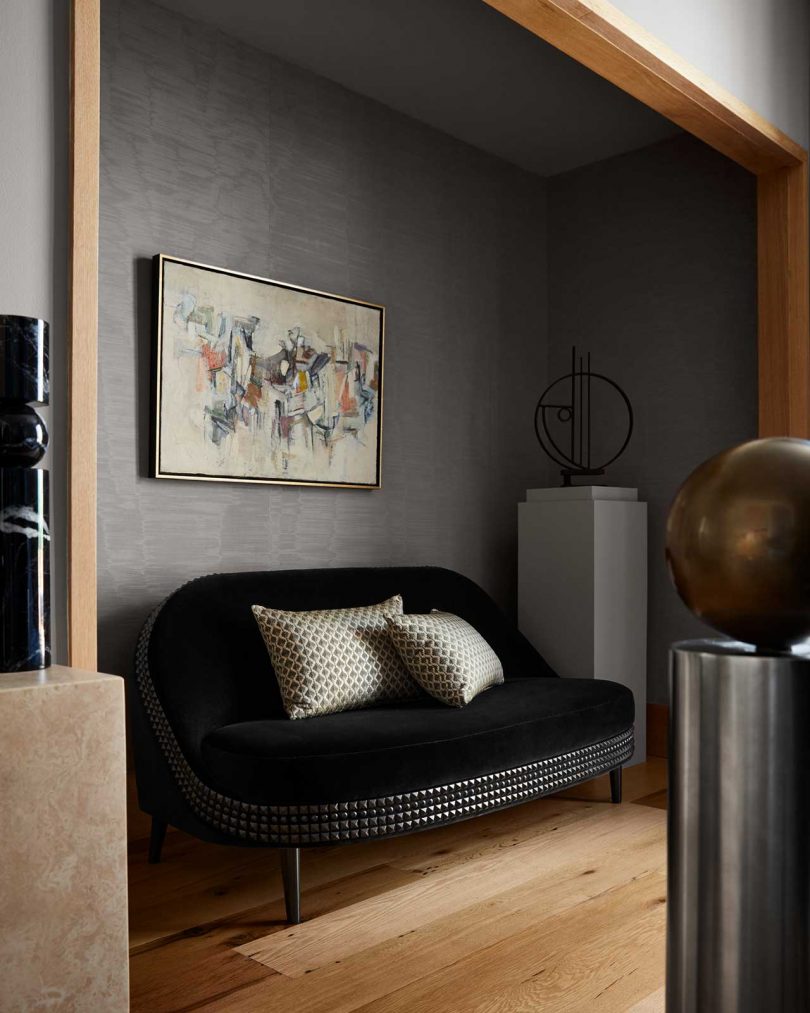 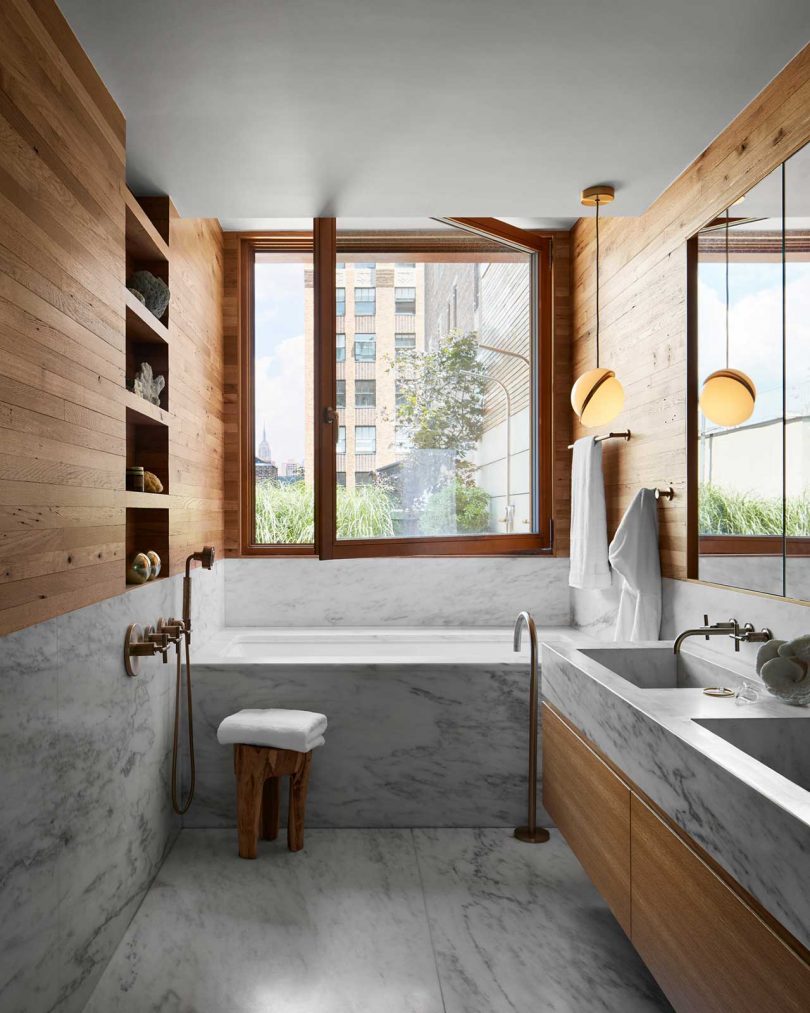 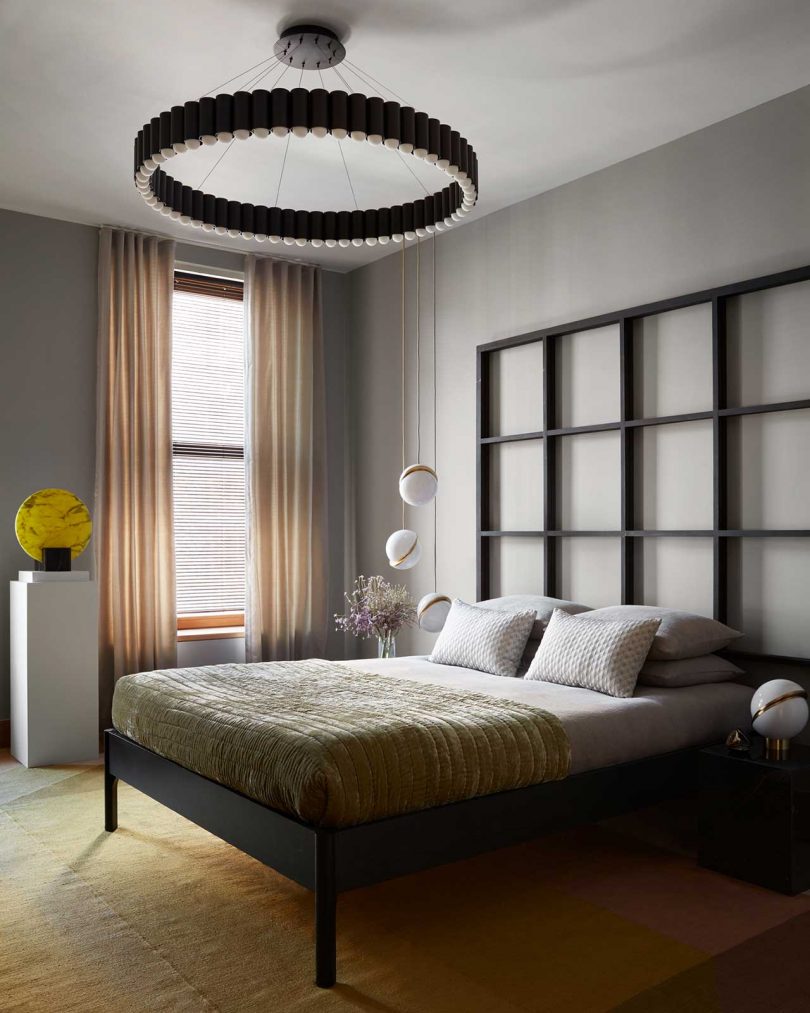 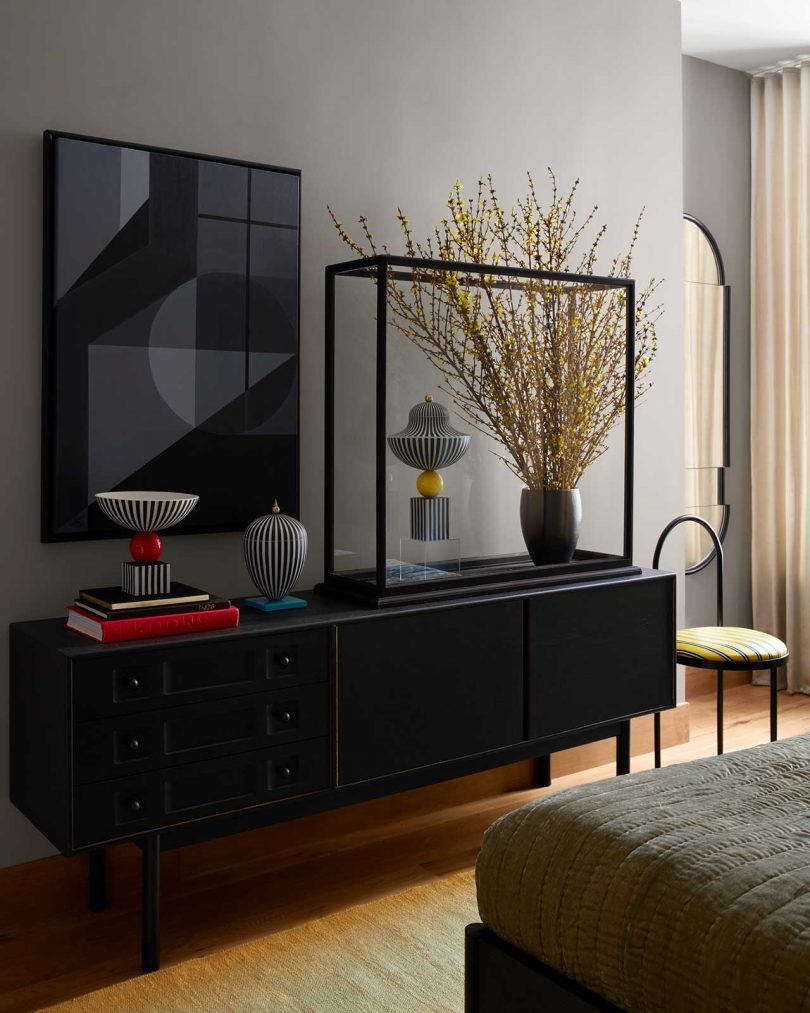 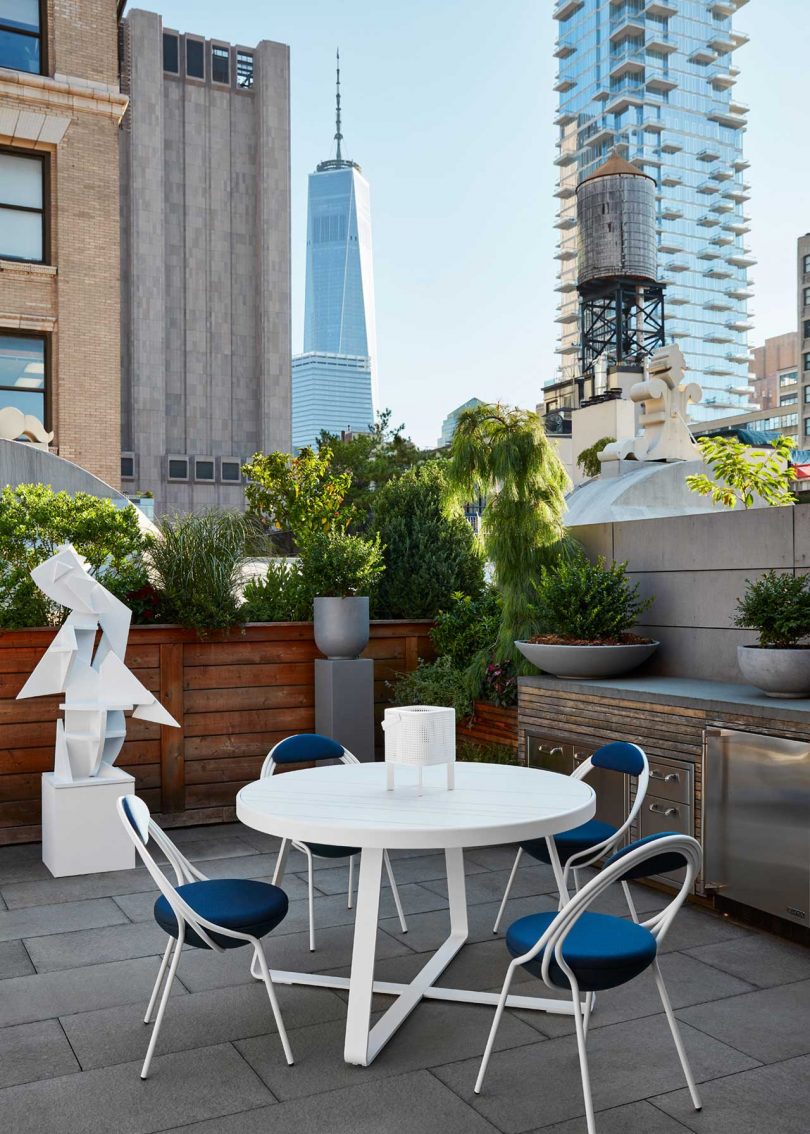 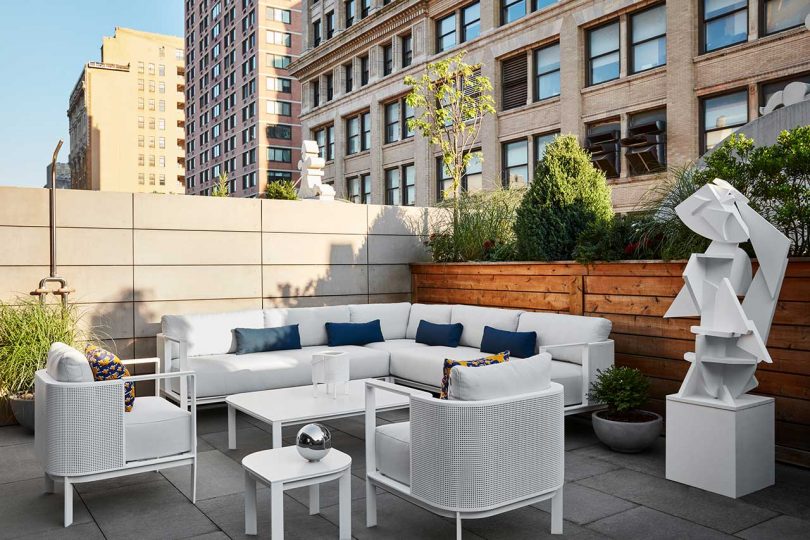 Klein Dytham Architecture has created a decorative wooden facade featuring a pattern of interlocking three-dimensional blocks that are individually illuminated at night for...

portuguese designer joão teixeira has done away with drawers and embraced smooth curves for this minimal desk that would look great in any home...