Light vs. Deep Versions + Visualizing & Comparing All the Shades

Light vs. Deep Versions + Visualizing & Comparing All the Shades


One of the questions I’ve been asked the most is whether someone should get the Light or Deep version of a palette, so I thought I’d discuss the differences and hopefully provide some insight/ask the right questions to help you dial in whether the light or deep version is more suitable for you, assuming you’re looking to purchase one.

As always, if none of the palettes would be something you wear, please do not buy to “support” me. Engaging with the content I post, reading Temptalia in general, and sharing content (whether about my palettes or something else) are money-free ways to support. I’ve also provided comparisons to existing Sydney Grace eyeshadows and pulled dupes for every single shade, so you can compare against products you already own (through the Vanity feature).

Here are some posts that might be useful, prior to reading through this one!

Here is a preliminary list of questions you should ask yourself when debating between the Light and Deep versions:

Will you mostly use the palette on its own or are you willing to pull in shades that you may need for your specific skin tone?

The more you lean into using one palette and one palette only, the more you should select the palette that has shades that work for your skin tone and would provide the closest crease/transition kind of shades you’d want. This likely means Light palette for very light to medium skin tones and Deep for medium-dark and darker skin tones.

For lighter skin tones, do you prefer less-intense, lighter looks?

The Deep versions are darker, richer, and more intense–deliberately so that they work on deep complexions, and while lighter skin tones can absolutely wear them, it may feel like only smokier/darker looks can be achieved. This is easily solved by incorporating your favorite go-to crease/transition shades or pairing with another palette you have, but not everyone wants to do that.

Do you have dupes of the lighter / deeper shades respectively?

If you would use all the light and deep shades, what offers something new(ish) compared to what you already own? If it is a dupe, is it a shade you’d use often or prefer in this formula/finish?

Should I get the Light or Deep version of Quintessence?

Let’s do a little discussion of the shades! 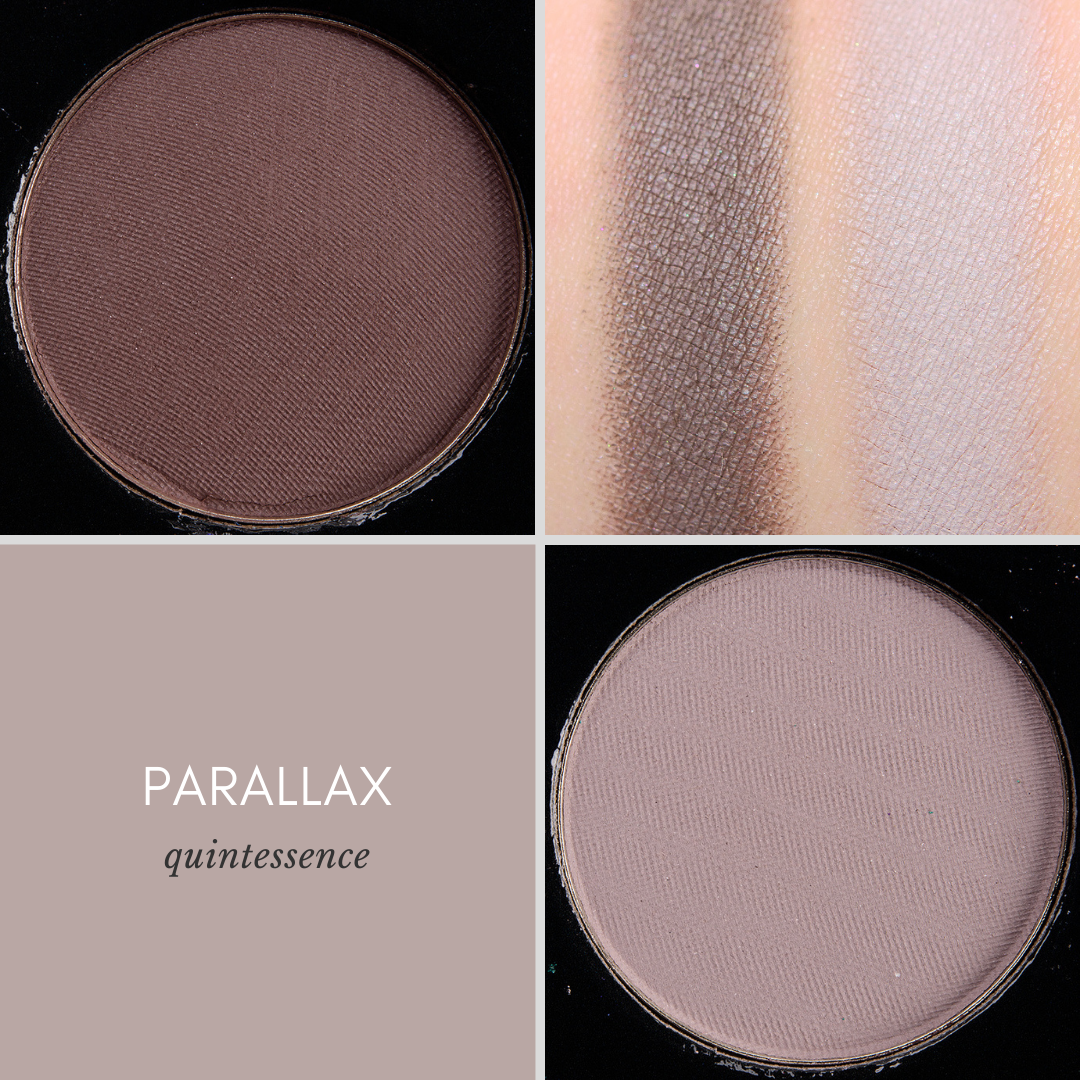 Parallax (Light) is the lightest shade from the entire range of shades developed for the collaboration.  Generally, those with darker skin tones will find this shade less usable (potentially not usable at all).  Parallax (Deep) works on dark skin and works well on lighter skin tones as well. 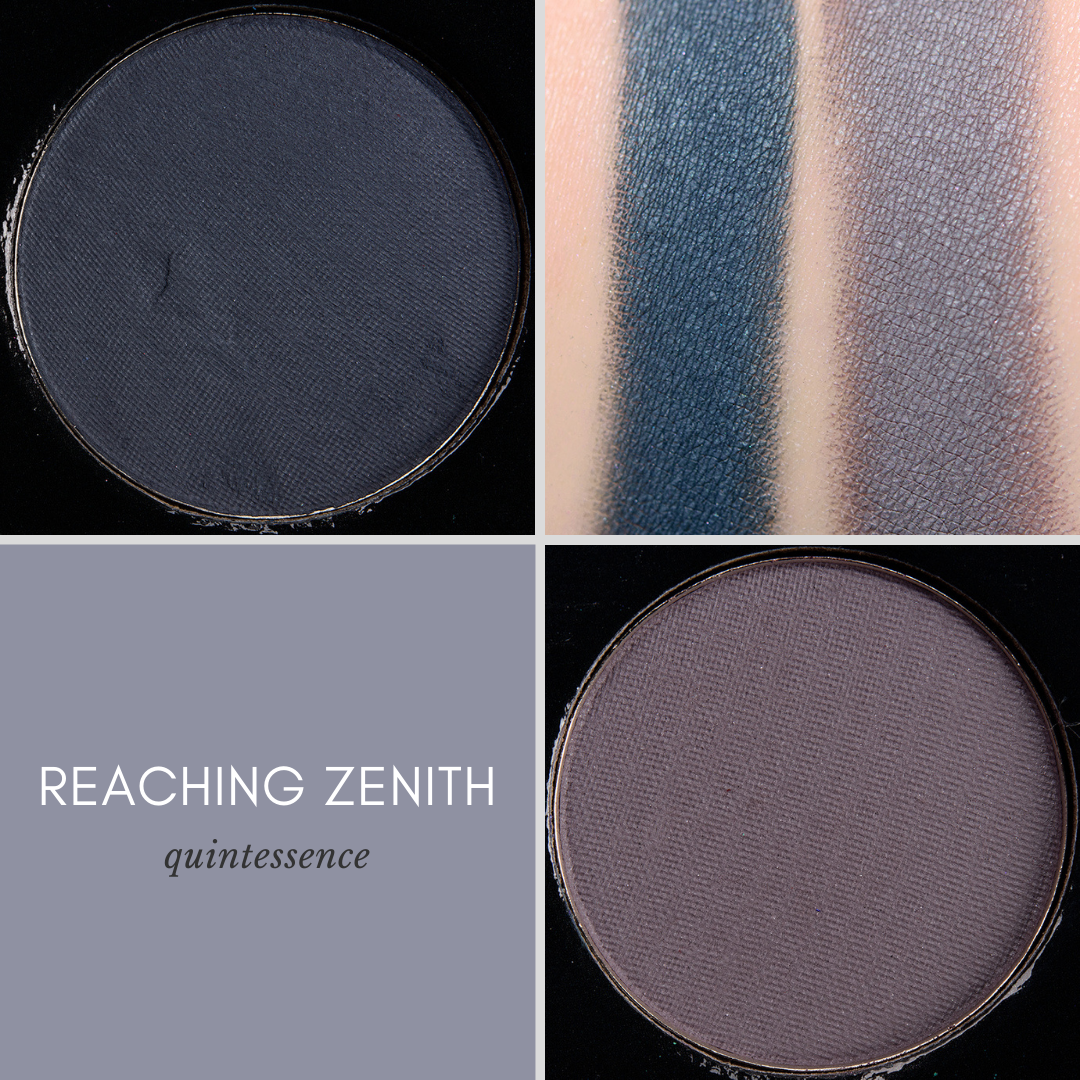 The Light Palette is most suitable for someone who has a very light to medium skin tone, likes more lavender/taupe shades, and finds there is enough depth/smokiness already from the inclusion of Umbra (matte black) and Interstellar (matte teal).  With the Light version, you mix Interstellar and Reaching Zenith (Light) together to get something similar (but slightly greener) to Reaching Zenith (Deep).

The Deep Palette is most suitable for medium-dark and darker skin tones, anyone who uses less light-toned mattes or prefers less lavender-based taupes, or someone who is lighter in skin tone but will pair with their go-to neutrals/transitions.

Should I get the Light or Deep version of On the Horizon?

The Light versions are both significantly lighter than the Deep versions. 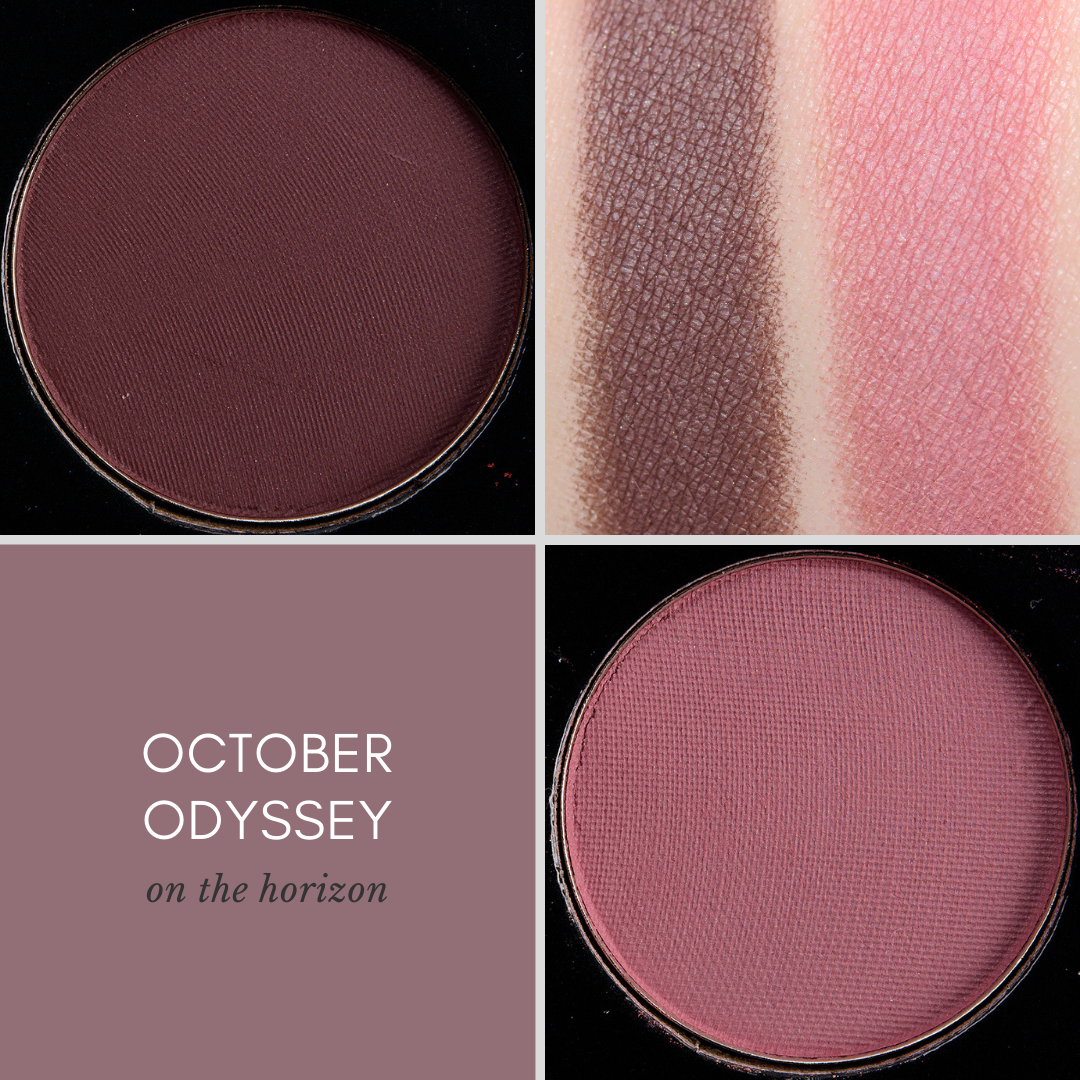 October Odyssey (Light) is more of a mid-tone pink compared to October Odyssey (Deep), which is darker, more of a plum-tinged brown. However, both shades work on light and dark skin tones but would likely function differently as the Light version would be more of a transition/blending shade on darker skin tones. 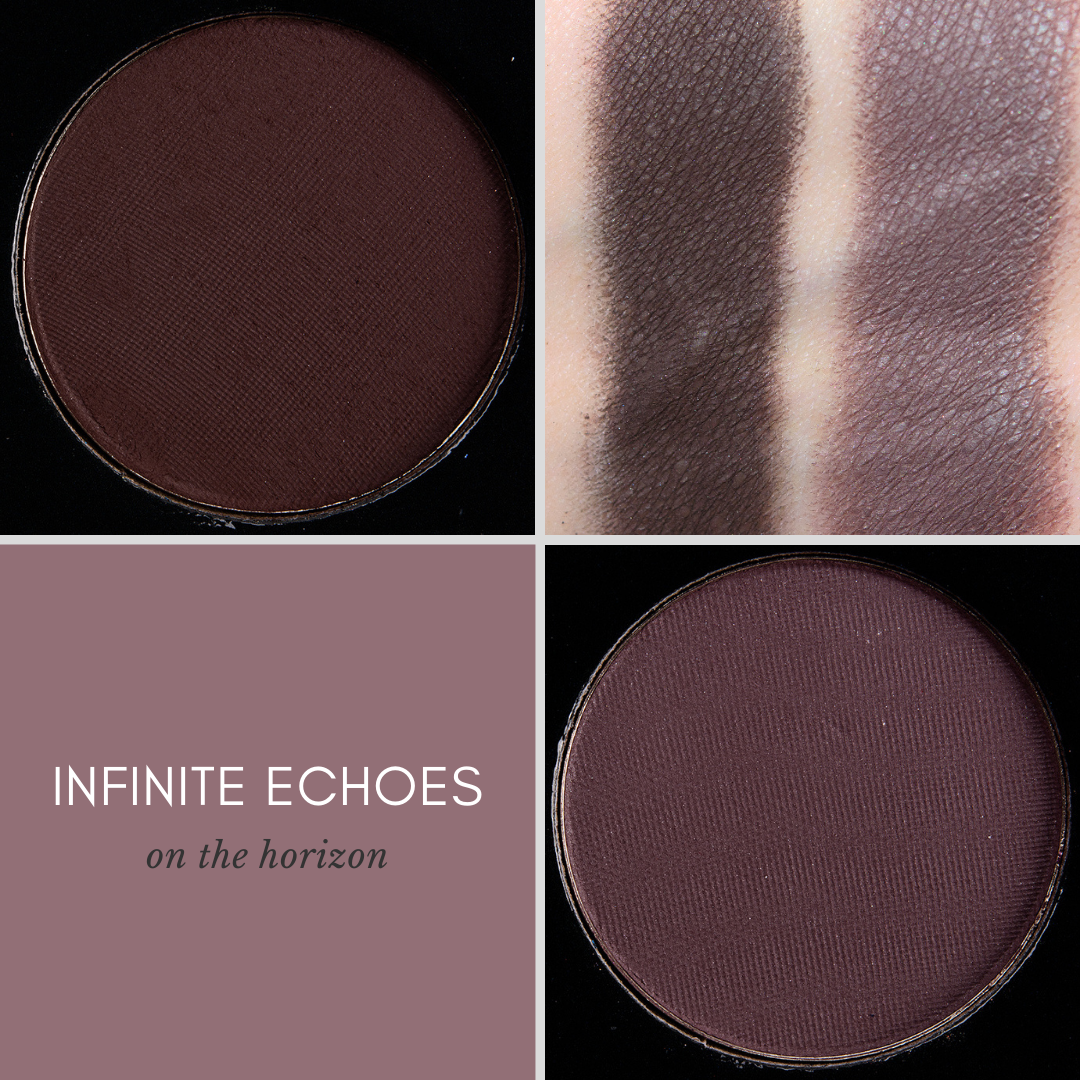 The Light Palette is ideal for someone who want to create really smoky, neutral looks, finds Infinite Echoes (Deep) (matte deep brown) to be intimidating or feels like they’d have to use such a light hand, and often uses mid-tone pinks in their looks.

The Deep Palette is ideal for someone who wants darker, deeper matte shades and doesn’t need light and mid-tone mattes (or will pull their go-tos to pair with the palette).  For those with darker skin and who don’t find they typically like cool-toned taupes, Infinite Echoes (Deep) will give you more satisfaction.

Should I get the Light or Deep version of Radiant Reflection?

Of the three palettes, Radiant Reflection was the one designed specifically to pair with the palettes you already own. The other two palettes were developed to standalone more, though I always envisioned them adding to what people have and working with the slew of neutral palettes already in existence… because if you’re a Temptalia reader, I feel like it’s safe to say you have at least a few palettes (or plenty of singles). 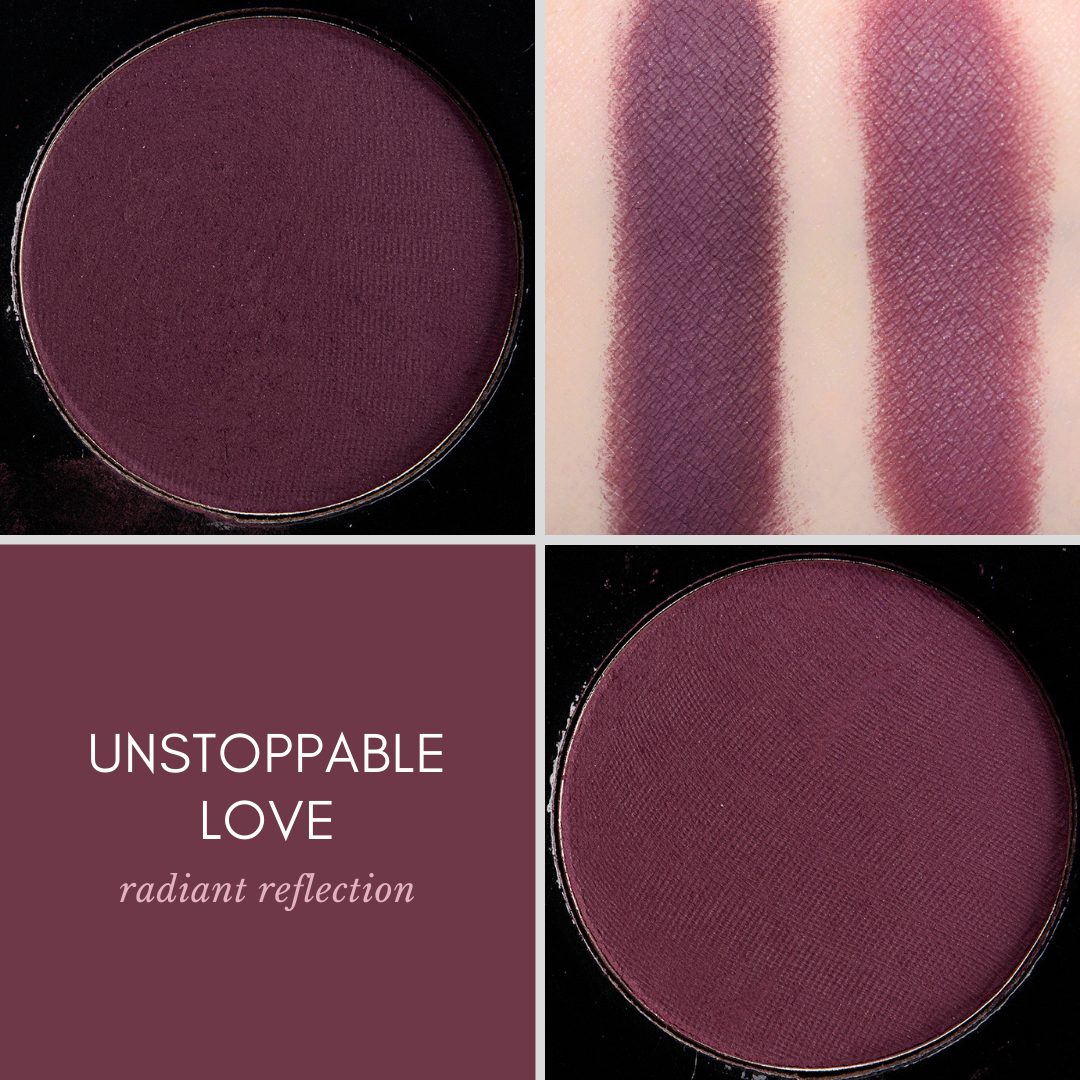 The difference between Unstoppable Love (Deep) and Unstoppable Love (Light) is the smallest of all the Deep/Light relationships, though the differences translate more on certain skin tones; the Deep version is darker, more saturated, and a little cooler-toned. The richness of the Deep version helps it retain more saturation on deeper skin tones.  Both versions work on lighter and darker skin tones, so it would definitely be a preference for depth and tone. 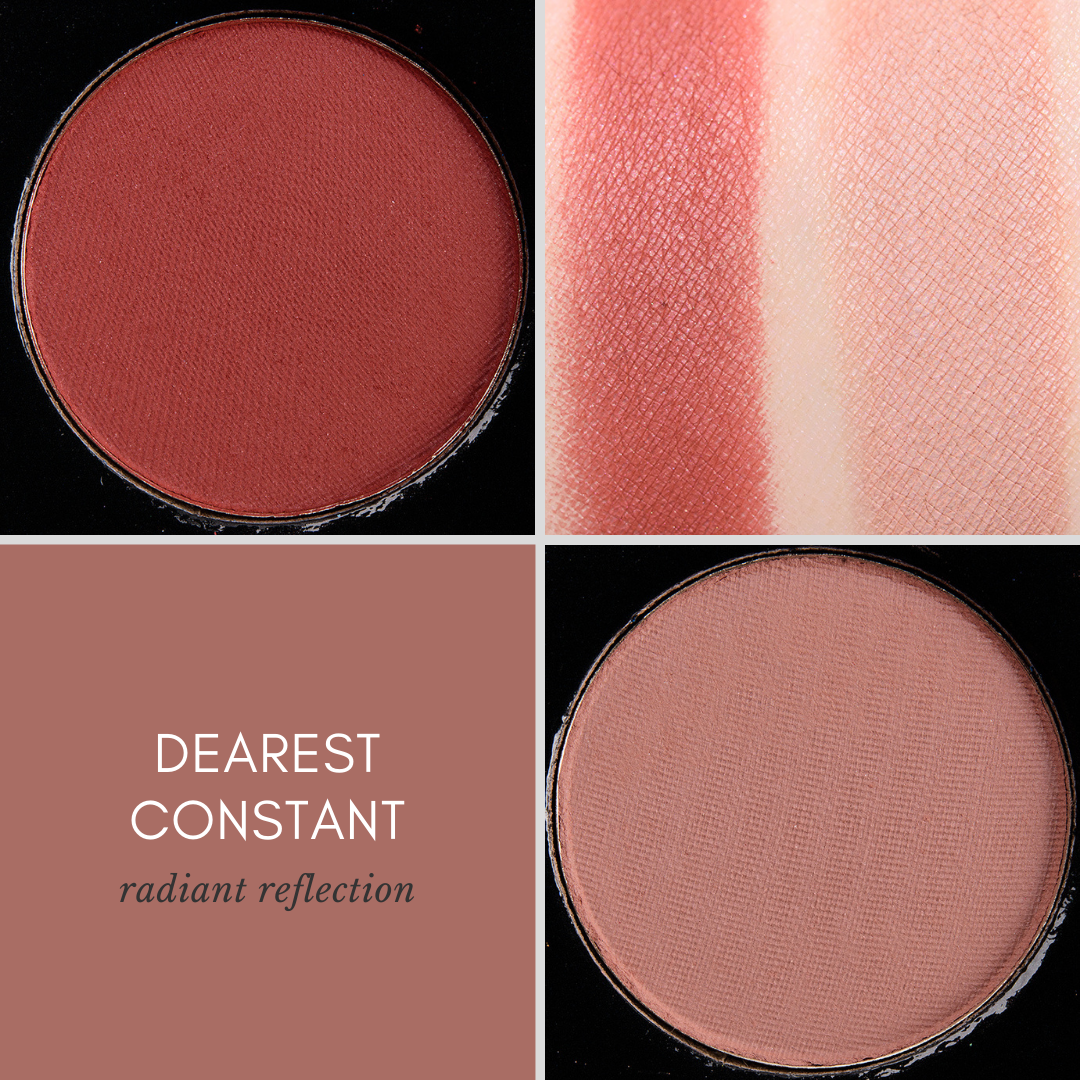 Now, the difference between Dearest Constant (Deep) and Dearest Constant (Light) is much more significant. They are intended to function more as transition and blending shade for their respective skin tones in a sea of brighter, more colorful hues. Deep skin tones may be able to use the Light version as a blending shade with a lighter hand but it is not an ideal color.

The Light Palette is for the person who really needs the lightness that Dearest Constant (Light) gives to the overall color story; this is really the most differentiating feature between the two versions. Unstoppable Love (Light) is less intense than the Deep version, but they function similarly, but if you’re someone who likes less saturation, then the Light version may pull you in a little more.

The Deep Palette is my preferred pick for most people (except as noted in the above paragraph) as I think that the copper coloring of Dearest Constant (Deep) really works to create a true vivid rainbow of hues.

Should I purchase the set? Are there repeats? 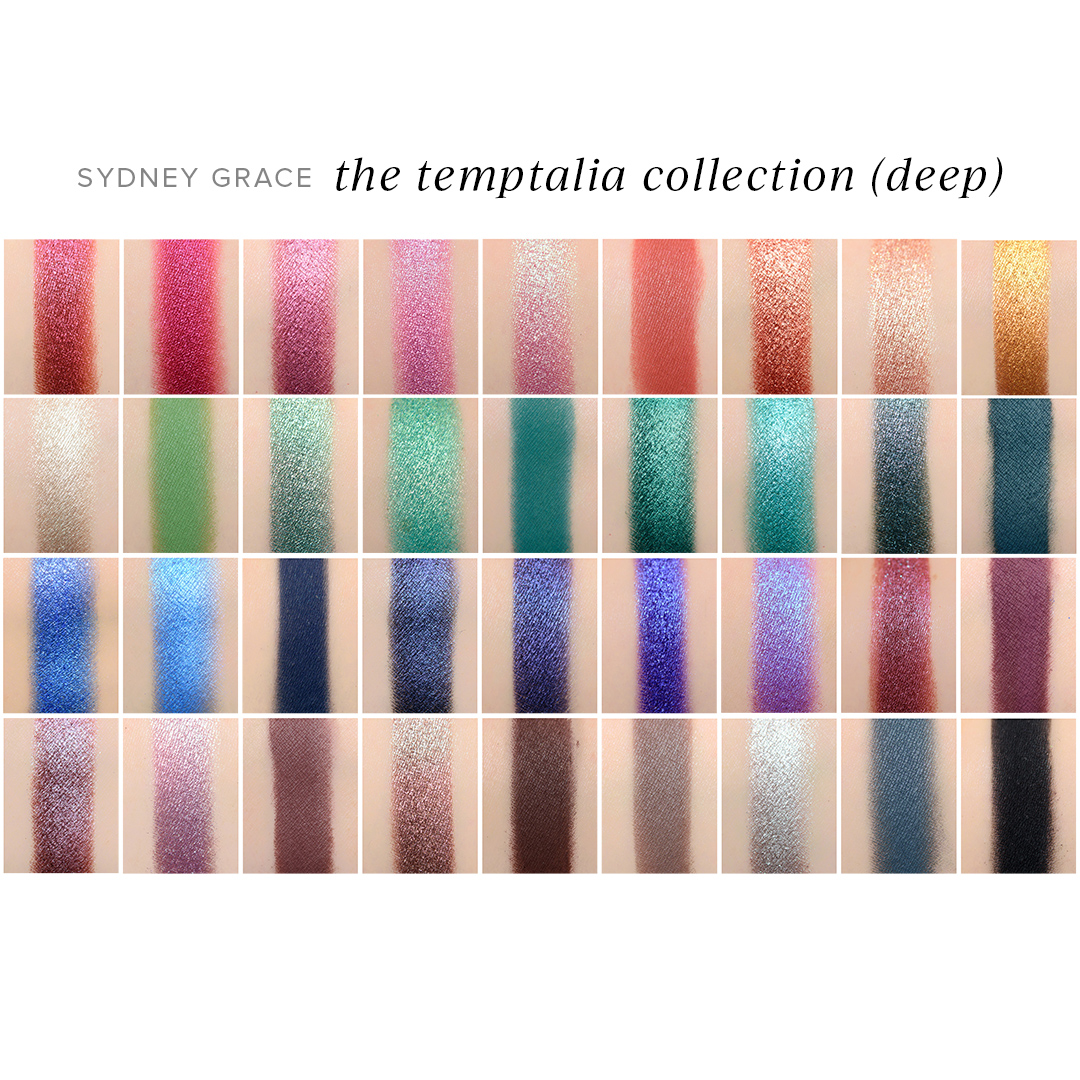 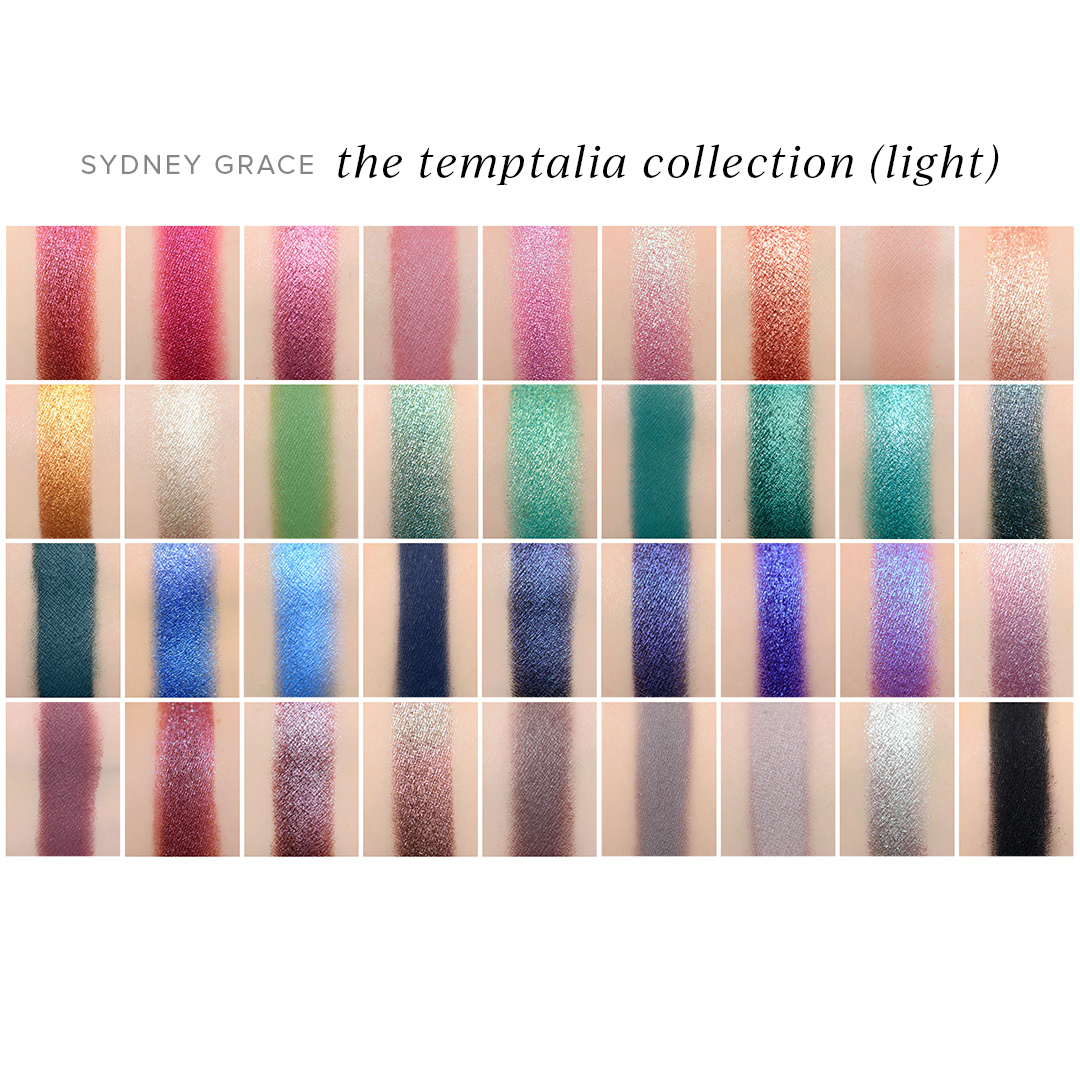 I wanted all three palettes to work together as a mega-collection! But let’s breakdown some of shades within certain color families: 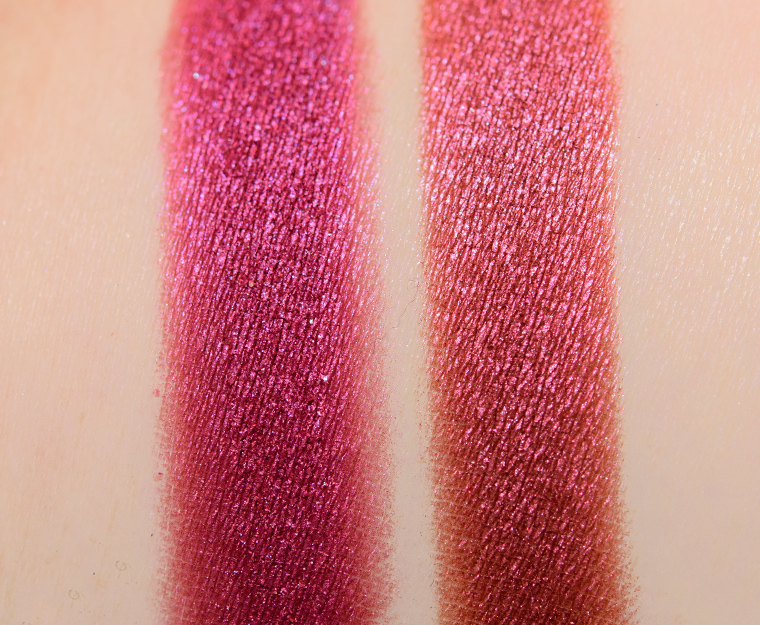 Reds: Orion Nebula has a lower sheen and is more of a raspberry red, so cooler and pinker, whereas Operose is warmer with more of an orange/copper base and a more intense shimmer finish. 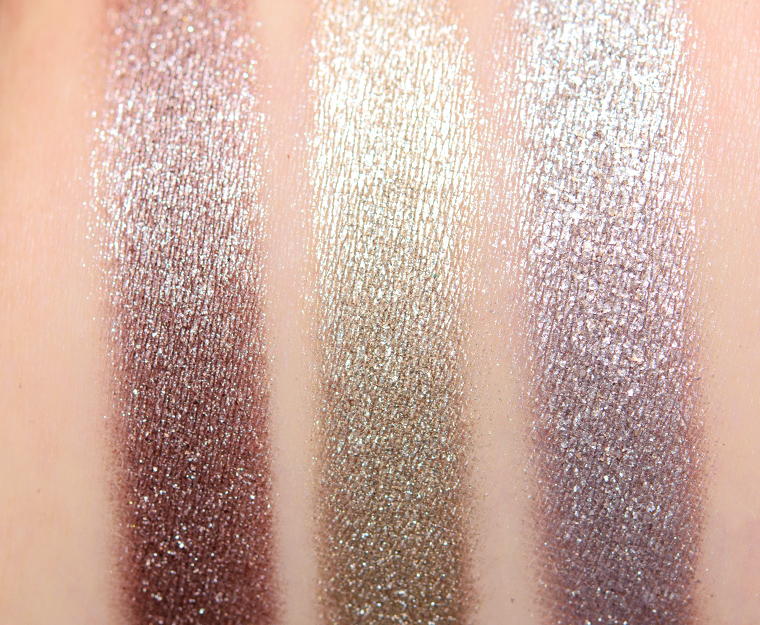 Metals: These aren’t really similar, but I felt like Heart-dog/Sirius Starlight merited a comparison – so I also threw in Phosphenes. Phosphenes is the darkest of the three and much browner in comparison to the other two. Heart-dog is warmer with a smoother sheen and is yellow/goldish. Sirius Starlight is almost a grayish-lavender/lavender-taupe with a little bit of beige to it and is the most sparkling of the three. 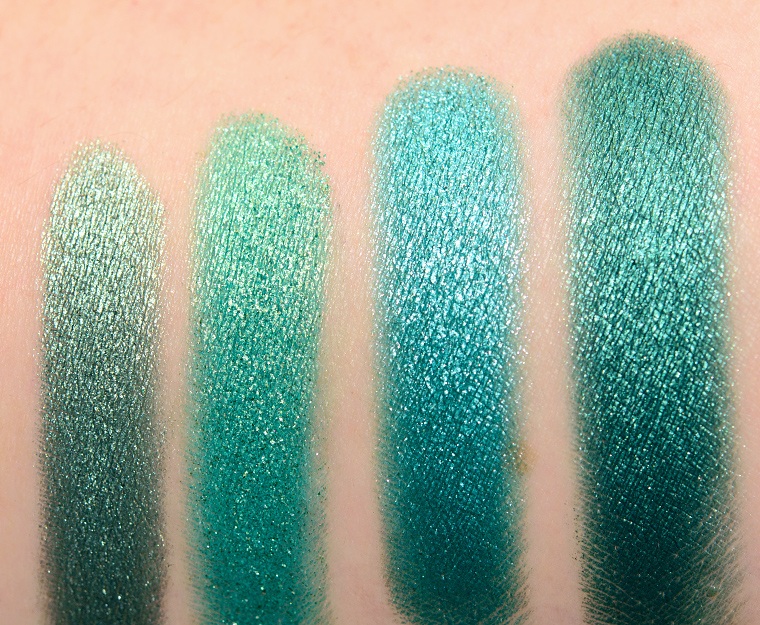 Greens: Earthbound is darker, cooler-toned, and much, much more muted compared to Borealis, which is significantly brighter with a stronger, golden sheen. 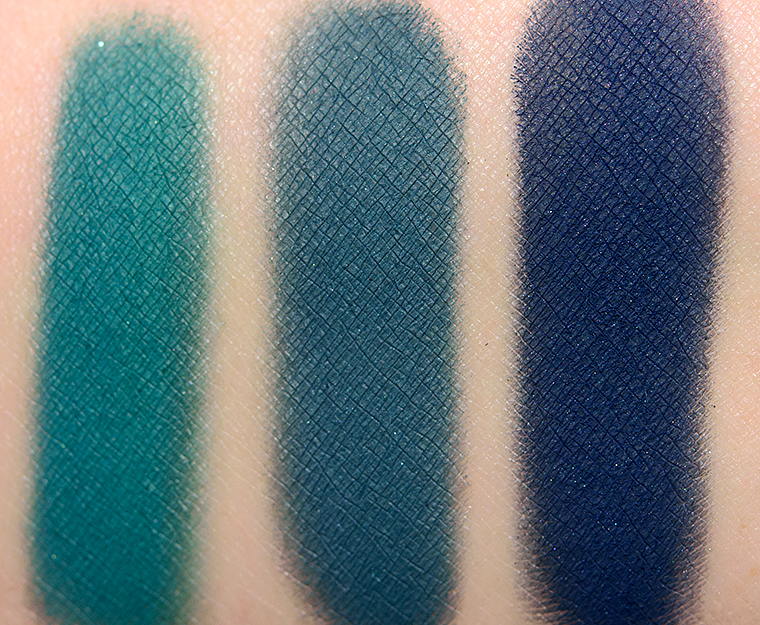 Teals (Mattes): Interstellar is darker, grayer, and more blue-based than Sublime Reverie, which is brighter, more of a mid-to-dark teal with subtle green. Midnight Courage is darker than both and significantly more blue-based.

Teals (Shimmers): Galactic Muse is significantly lighter and is a blue-based teal compared to Jealousy’s Descent, which is much, much darker and is green-based (more of an emerald green than a teal). 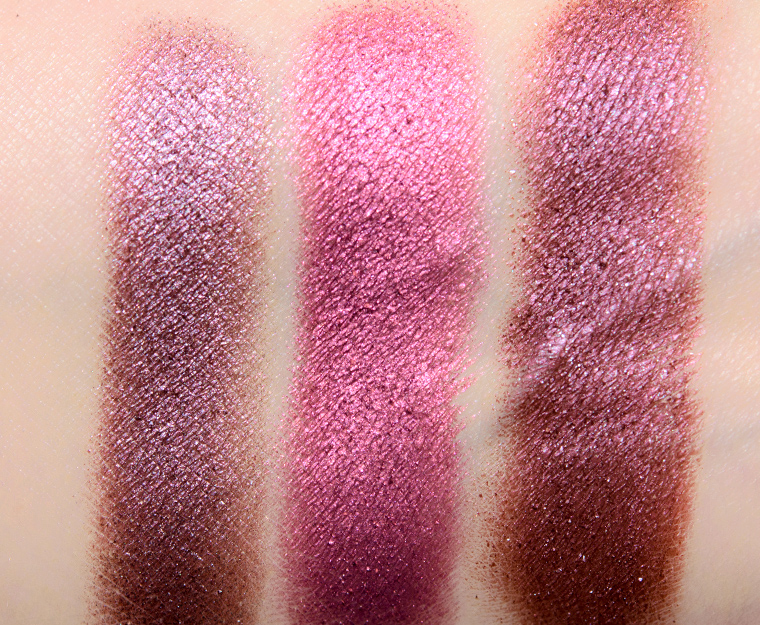 Plums: My Constellation is cooler-toned, brighter, and more reflective–more like an eggplant, purpler–than Sumptuous Serendipity, which is much warmer, darker, and redder overall. Sakura Glow is significantly pinker, perhaps a little more like a muted berry than a plum, though I think it’s a truer plum than most on the markets (which tend to be warmer). 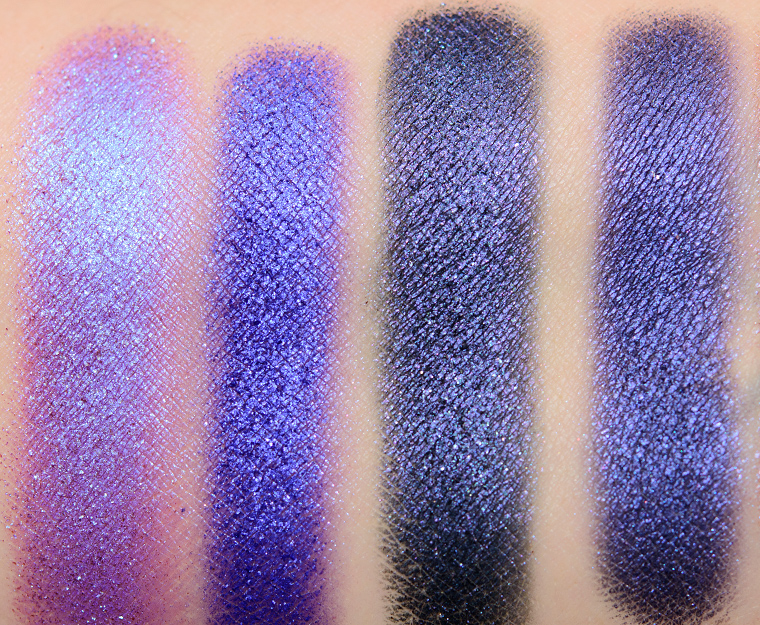 Purples: Calming Presence is darker and bluer with a stronger sheen compared to Forget-Her-Not, which is lighter and more violet with a satin-like sheen. These two are the closest shades between the set of 36, and I went with that because I still felt they differed enough and were the kind of colors that are hard to find (so I wanted to put them out there!).  Celestial Bloom has some bluish-violet flecks, but it doesn’t have the kind of shift as Aurora, which is much, much lighter and has a pinker base in comparison to Celestial Bloom.

That being said, if you rarely wear some shades, like say green, teal, or blue-based purple, having so many may feel like there’s overlap! I can see the nuances and differences in depth, undertone, and finish, but if you never wear teal, then having too many shades you won’t use often enough won’t make sense.

There are certain color families, like bluer purples, cooler greens, teals, and so on that I think are underrepresented in the plethora of eyeshadow, and they are the kind of shades I love and have found tend to draw readers in (through various color stories, singles reviewed, etc.), but there’s probably a reason why we don’t see them over and over again (not everyone likes ’em!).

And please don’t buy all the Light and all the Deep versions! The expectation is that most people will purchase one of the three palettes, and we provided Light and Deep versions to address the needs of different skin tones but not to encourage purchase of a set of both. For those who buy a set of three, I wanted to ensure that they did work in concert together and have them come together with the triptych artwork as a bonus treat.

Here4dBesthttp://here4dbest.com
Previous article19 Things Every 19-Year-Old Needs to Be Able to Do
Next article20 Designer Items to Snag From the Farfetch Sale

Get Dupes for Most Loved Products Check out dupes for most loved products between July 20th and July 26th. These are products that readers...