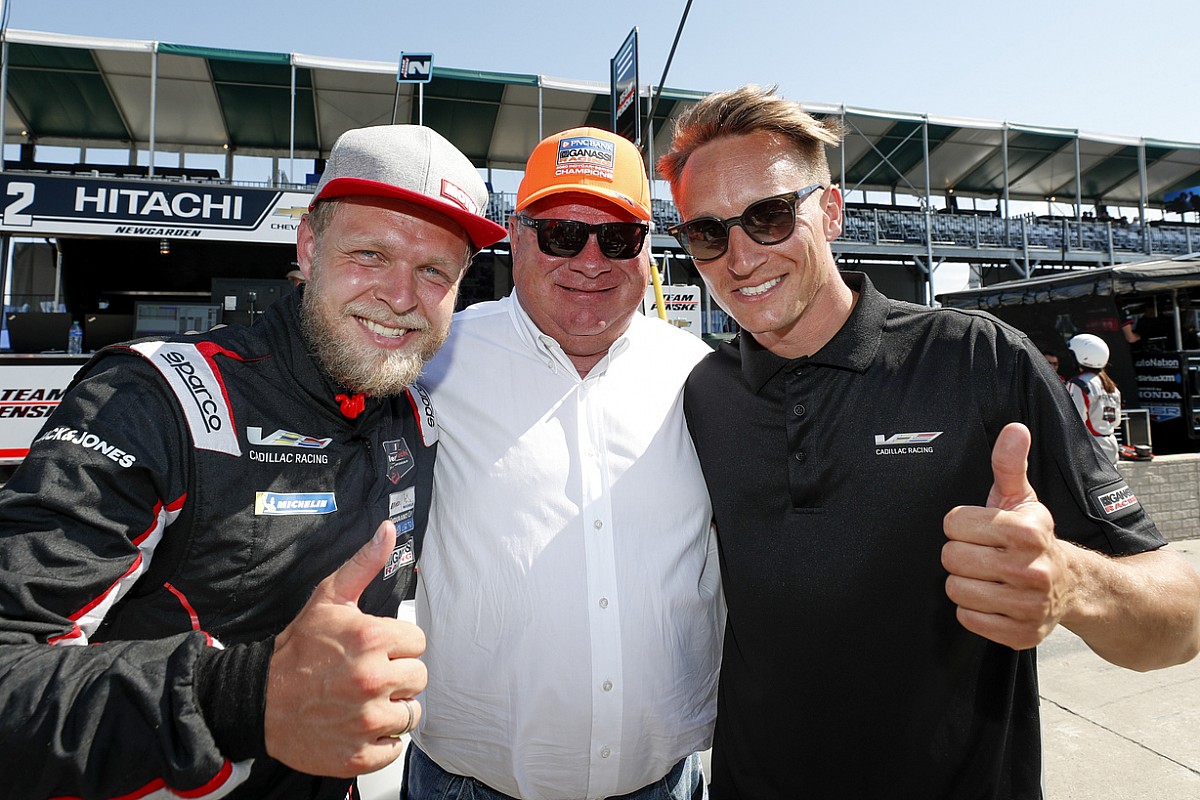 Magnussen, embroiled in a battle for pole with Tristan Vautier of JDC Miller Motorsports and Pipo Derani of Action Express Racing suddenly had a new target after Vautier hurtled sideways into the Turn 4 tire wall, but Race Control delayed hanging the red flag.

This allowed Tincknell’s RT24-P and Magnussen’s DPi-V.R to complete their current flying laps. The Mazda driver turned a 1min20.052sec to go top, but the #01 Ganassi Cadillac trimmed 0.021sec off that time and the former Formula 1 driver earned his first IMSA pole.

With Vautier losing his best time for causing a red flag, Derani was promoted to third ahead of Ricky Taylor in the Wayne Taylor Racing Acura ARX-05. Olivier Pla in the Meyer Shank Racing Acura was 1.4sec off the ultimate pace.

Frankie Montecalvo was second fastest in the #12 Lexus, ahead of Roman De Angelis in the Heart of Racing Aston Martin Vantage, and Robby Foley’s BMW M6 (Turner Motorsport).

One of the favorites for pole before qualifying, the #14 Vasser Sullivan Lexus, was left handling like a dodgy supermarket shopping cart after Aaron Telitz smacked the right rear into the wall on the exit of Turn 2. It also meant his co-driver, Jack Hawksworth, had nothing to drive in the Pro segment of qualifying that decides qualifying points.

However, Telitz’s best to that point kept him fifth, ahead of Madison Snow’s Paul Miller Racing Lamborghini Huracan.

When the Pros took over the cars, the Corvettes – who are running for show, rather than points this weekend – also joined the fray, with Jordan Taylor steering the #3 C8.R and Nick Tandy in the #4. That mini-battle was resolved in Tandy’s favor by an impressive 0.323sec.

Among GTD Pro drivers, Mario Farnbacher’s Compass Racing Acura NSX edged Ross Gunn’s Aston Martin Vantage by 0.123sec. Townsend Bell, drafted in at the last minute to sub for COVID-positive Zach Veach, was a highly impressive third fastest ahead of the Jeff Westphal in the pole-winning Audi, Katherine Legge in the Hardpoint EBM Porsche 911, and Mikael Grenier in the SunEnergy1 Mercedes.

Team Dynamics, the squad that runs the Scot’s Honda Civic Type R, has blamed “finger trouble” for a mistake in the rear-wing...

LMP2 teams swept practice for the 8 Hours of Portimao, but the hypercars surged to the top when it mattered the most,...

8 Trendy Shoes to Wear With Shorts This Summer

How do you coordinate your makeup with your outfit?