Mercedes made ‘very clear’ I’ll get equal treatment with Hamilton

Mercedes made ‘very clear’ I’ll get equal treatment with Hamilton


Mercedes put an end to months of speculation by announcing on Tuesday that Russell would be joining its works F1 team next year, replacing Valtteri Bottas after spending three seasons with Williams.

Russell has been a member of Mercedes’ young driver programme since 2017, and deputised for Hamilton at last year’s Sakhir Grand Prix after the seven-time world champion was ruled out by COVID-19.

The move will provide Russell the first chance of his F1 career to regularly fight at the front of the field, with many expecting there to be a close fight against Hamilton, a driver 13 years his senior.

But Russell is not joining Mercedes expecting to play a number two role to Hamilton, saying that he would be “definitely going on level terms” next year.

“That was made very clear to me,” Russell said.

“I think Mercedes are always respectful in that regard, to give both drivers the best opportunity.

“Naturally I believe in myself, and I have high aspirations. But equally I know just how tough it is going to be.

“Lewis is a seven-time world champion for a reason, and I think I’m in probably one of the most fortunate positions on the grid to be able to go out there and learn from him.

“For myself, I see this partnership with Mercedes as a long-term thing, and I guess I need to use next year as a real opportunity to learn, and take it race by race, and just see how I get on.

“But I’ve got no initial thoughts really.” 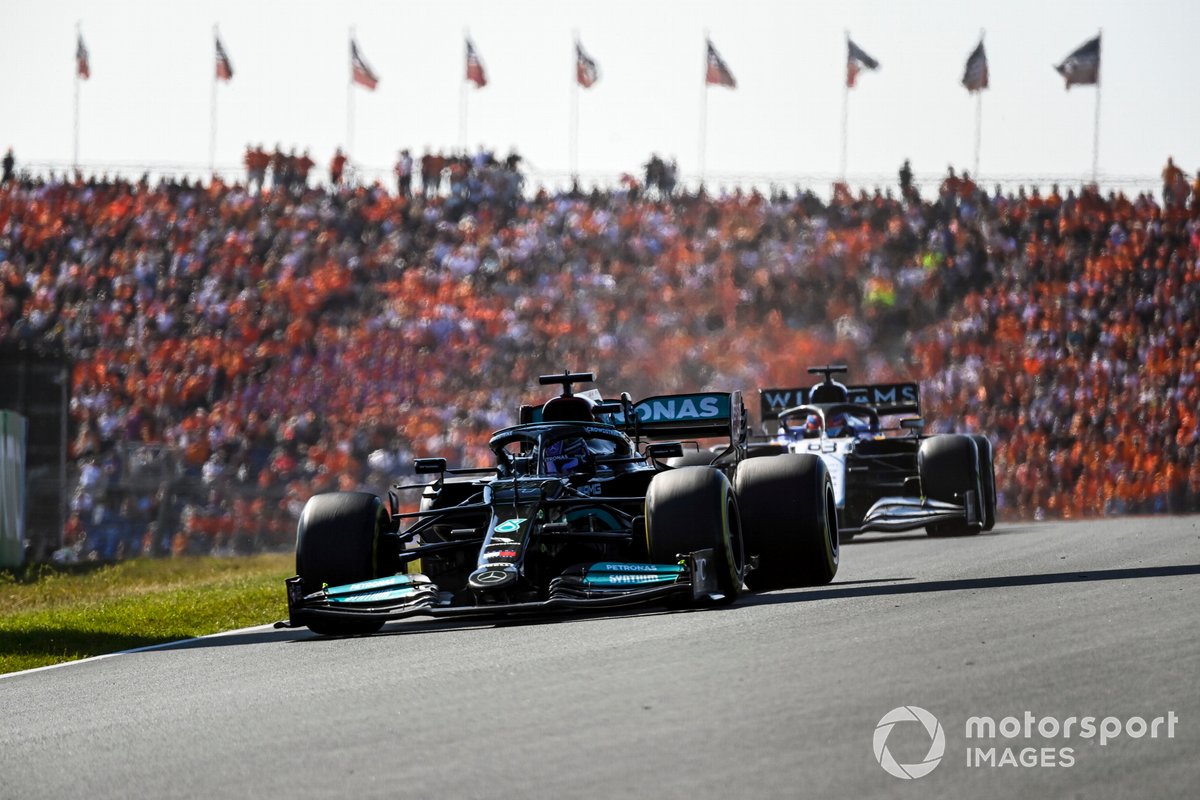 Mercedes has always given its F1 drivers equal opportunities within the team, and has only implemented team orders when one driver looks firmly out of the title race, seen most clearly at the 2018 Russian Grand Prix when Bottas moved aside to let Hamilton win the race.

Russell was confident there would be no repeat of any intra-team issues at Mercedes upon his arrival, and that the team had learned from previous experiences.

“I think Mercedes have had clear experience of a poor dynamic within the team, and they’ve made it absolutely clear that they don’t want a repeat,” Russell said.

“On a personal level as well, I don’t want that either. I think it’s so important as team-mates to work together, to push the team.

“Next year it’s a new car and new regulations. There’s no guarantees who is going to have the fastest car. I guess it’s our job as drivers to push that forward.

“I’d say as well, Lewis and I are at very different stages of our career, which I think also helps, and I have a huge amount of respect for him, I think being so much younger and looking up to him as a young karting driver changes that dynamic a lot too.

“I don’t see there being any issues at all.”

Here4dBesthttp://here4dbest.com
Previous articleA Mesmerizing Animation Spins Through Banknotes From 23 Countries in a Hypnotic Look at What Cultures Value
Next articleWATCH: The Matrix Inspired Ski Advertisement by K2

‘Our Hopes Were Taken Away’

The Best Dip Recipes, According to Eater Editors