michael jantzen unveils a series of experimental greenhouses from 1972 to 1980. during this decade, the los angeles-based architect explored ways to design and build energy-efficient structures to grow plants in the cold southern illinois winters, where he and his wife ellen lived. continuing these five experimental greenhouses, in 1986, he developed his latest experimental 80s greenhouse ‘the growth accelerator’. these projects were done in conjunction with the design and construction of various solar-powered houses that he also created as experiments for living off-the-grid. 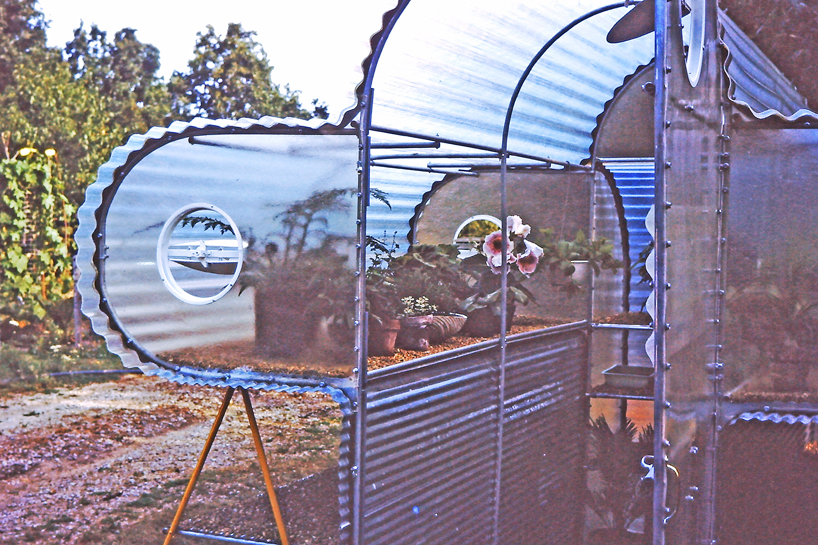 all images courtesy of michael jantzen

‘the winged greenhouse’ inside

the first of these experimental greenhouses that michael jantzen designed and built, was dubbed ‘the winged greenhouse’ and was made of steel pipe and corrugated fiberglass. the structure’s primary energy-saving feature was its shape; the wing- or T-shape reduced the amount of heating energy needed for the plants by decreasing the amount of space demanded by a human to care for them. shelves were also built into the structure under the wings to shade the plants during the summer when they were removed from the inside. 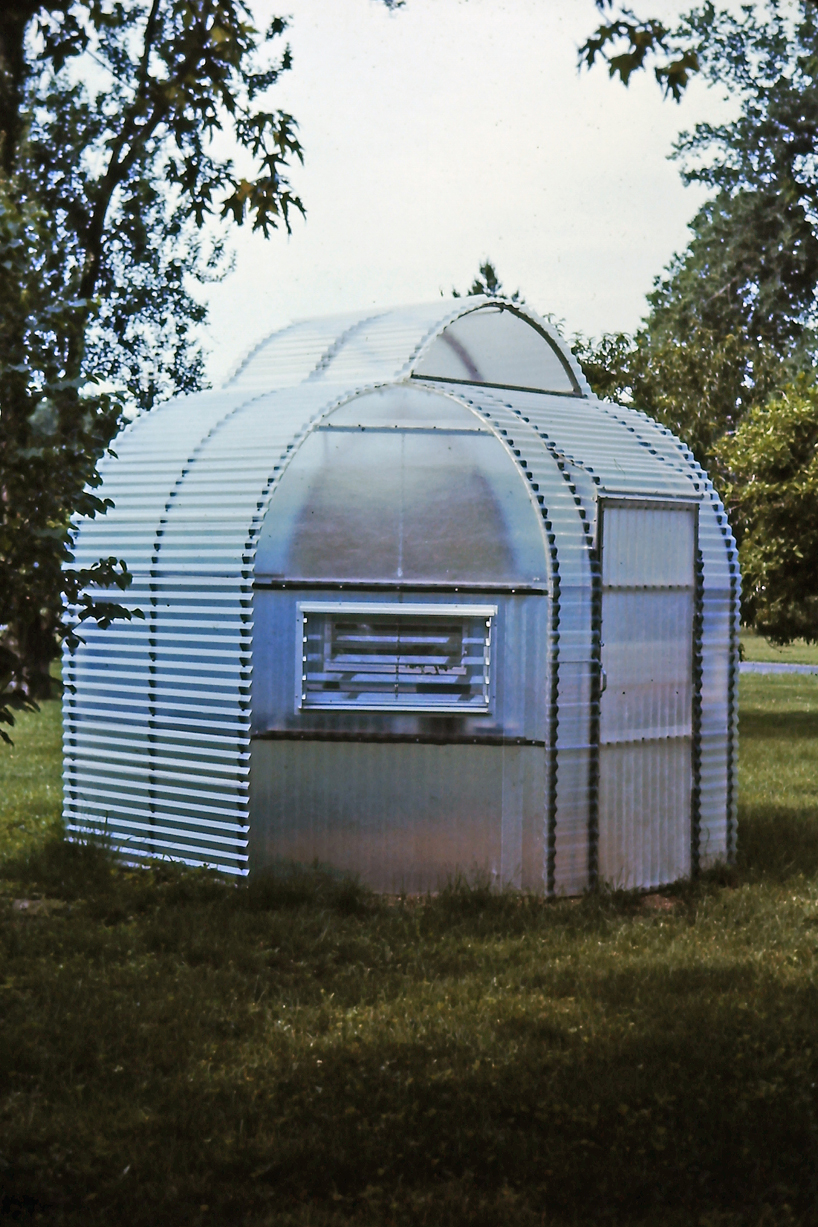 in 1973, michael jantzen created and built the second greenhouse project, ‘the modular greenhouse’. the design of this structure was focused on creating a low-cost modular structure made of steel pipe and fiberglass. it was assembled from nine prefabricated sections that could easily be bolted together, forming a very strong energy-efficient greenhouse that could be added onto by attaching more of the same structures together into various configurations. 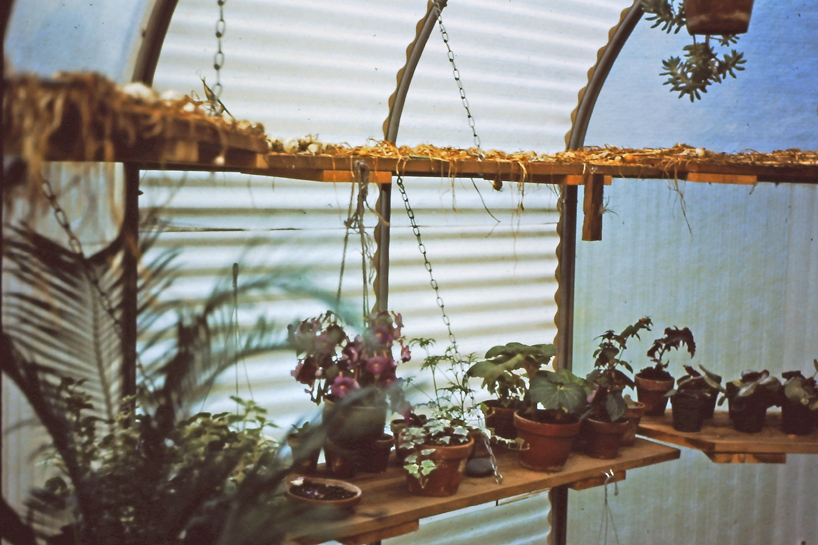 ‘the modular greenhouse’ inside

the next project in 1974 was named ‘the insulated greenhouse’ and assembled of painted plywood, acrylic, corrugated fiberglass, and foam insulation. the entire structure could be insulated at night during the winter to retain the solar heat gain during the day. throughout the day two large curved insulated panels could be rotated up or down exposing the clear acrylic glazing through which the sunlight and heat entered the greenhouse. meanwhile, in the day, whenever the interior temperature was rising, a small blower could pull out the hot solar-heated air through the rock wall in the north. 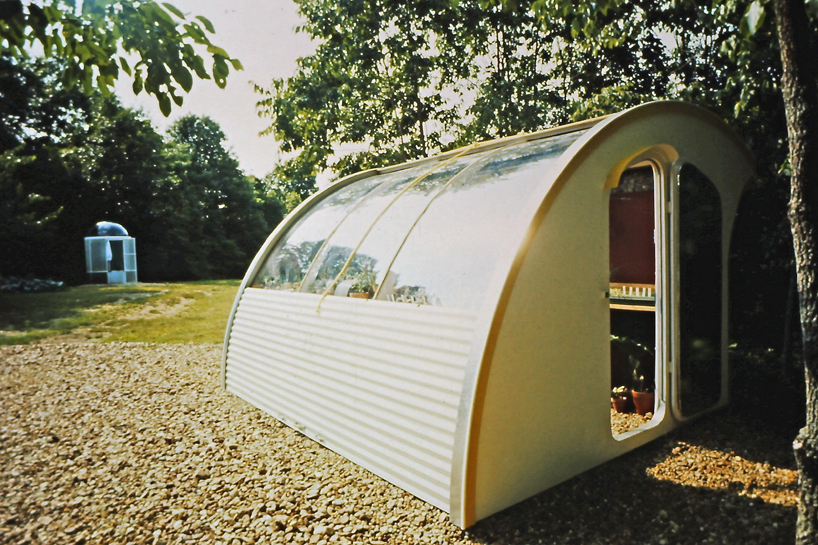 ‘the insulated greenhouse’ in an open position

the fourth project, ‘the insulated blanket greenhouse’ was made in 1980 and constructed by insulated and painted plywood, corrugated fiberglass, and a foam pad covered with reflective polyester mylar. the north, east, west, and the lower portion of the south side of the greenhouse were protected on the outside with foam. the mylar-covered foam pad was contained between two layers of corrugated fiberglass mounted on the south side of the structure. the mylar and foam pad could be moved with hand cranks between the two layers of fiberglass from the south to the north side of the greenhouse from day to night in order to retain the solar heat gain for the plants. 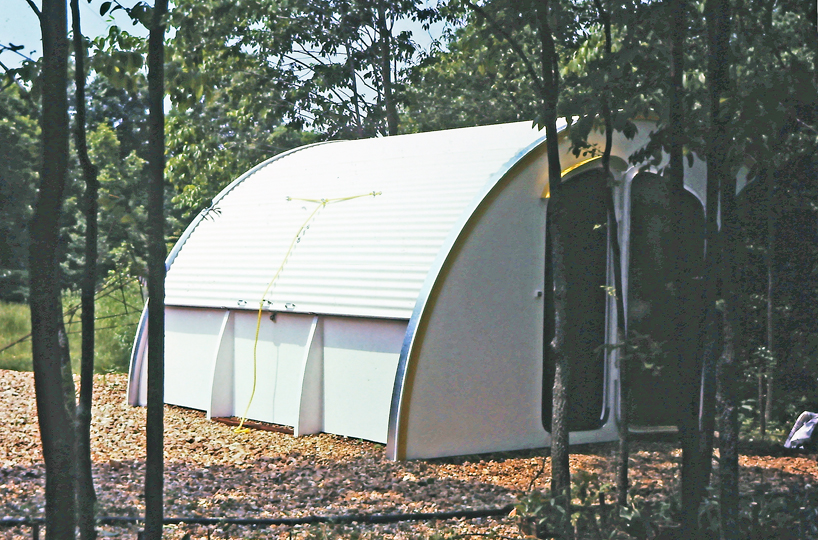 ‘the insulated greenhouse’ in a closed position

the final experimental greenhouse also formed in 1980 was called ‘the commercial greenhouse’. it took shape as a large structure designed to function as a growth chamber machine that was attuned to the patterns of growing plants from seeds to seedlings for sale to the local gardeners. a large mound of earth on the east side of the greenhouse covered a long insulated steel culvert; during the cold weather, the seeded plants could be rolled into the coated steel culvert under the mound of earth from inside of the glazed portion of the structure. throughout the day the plants were rolled back into the glazed section of the greenhouse that was equipped with large amounts of solar heat-retaining mass, in the form of water-filled barrels. 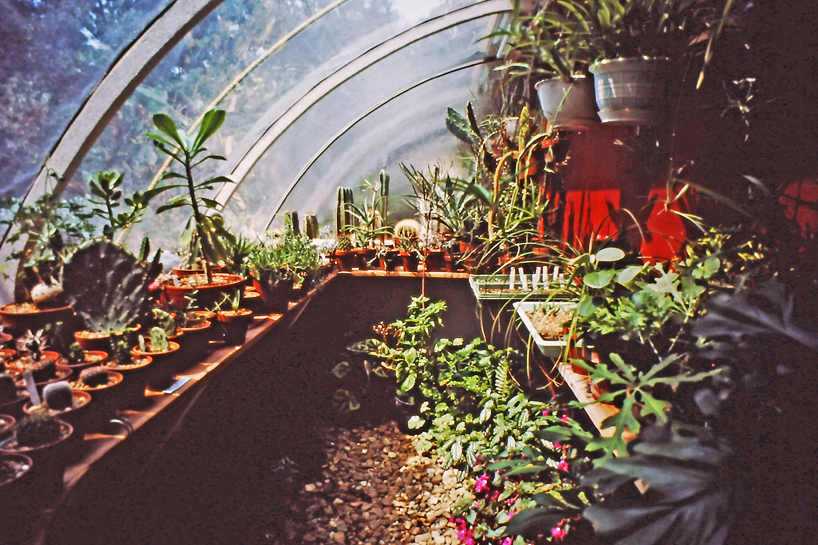 ‘the insulated greenhouse’ inside 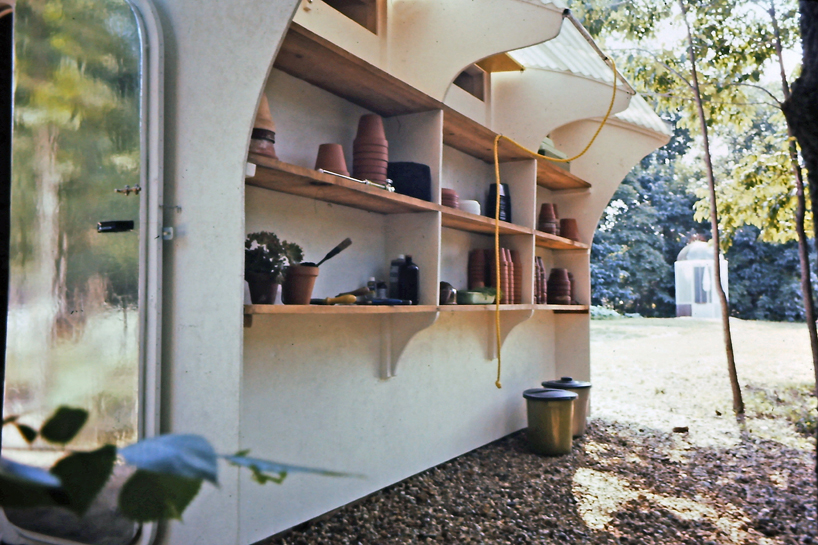 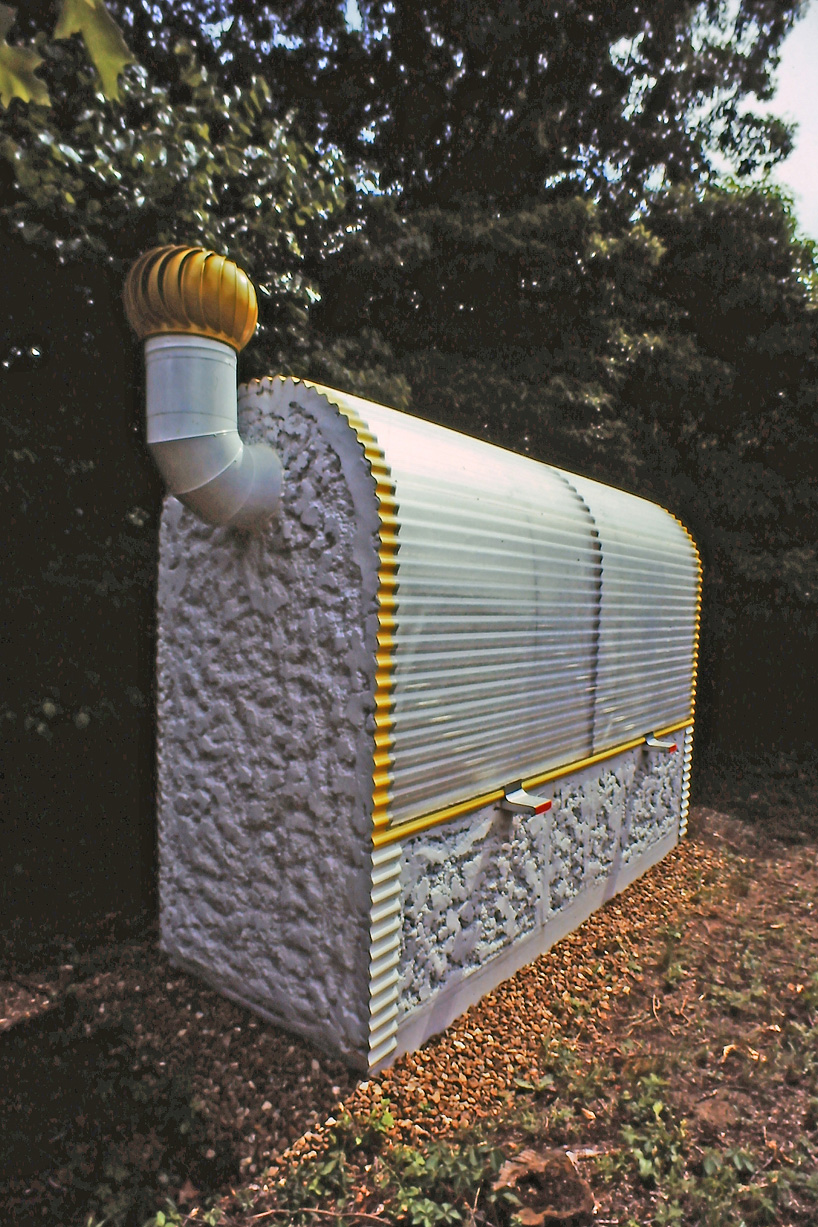 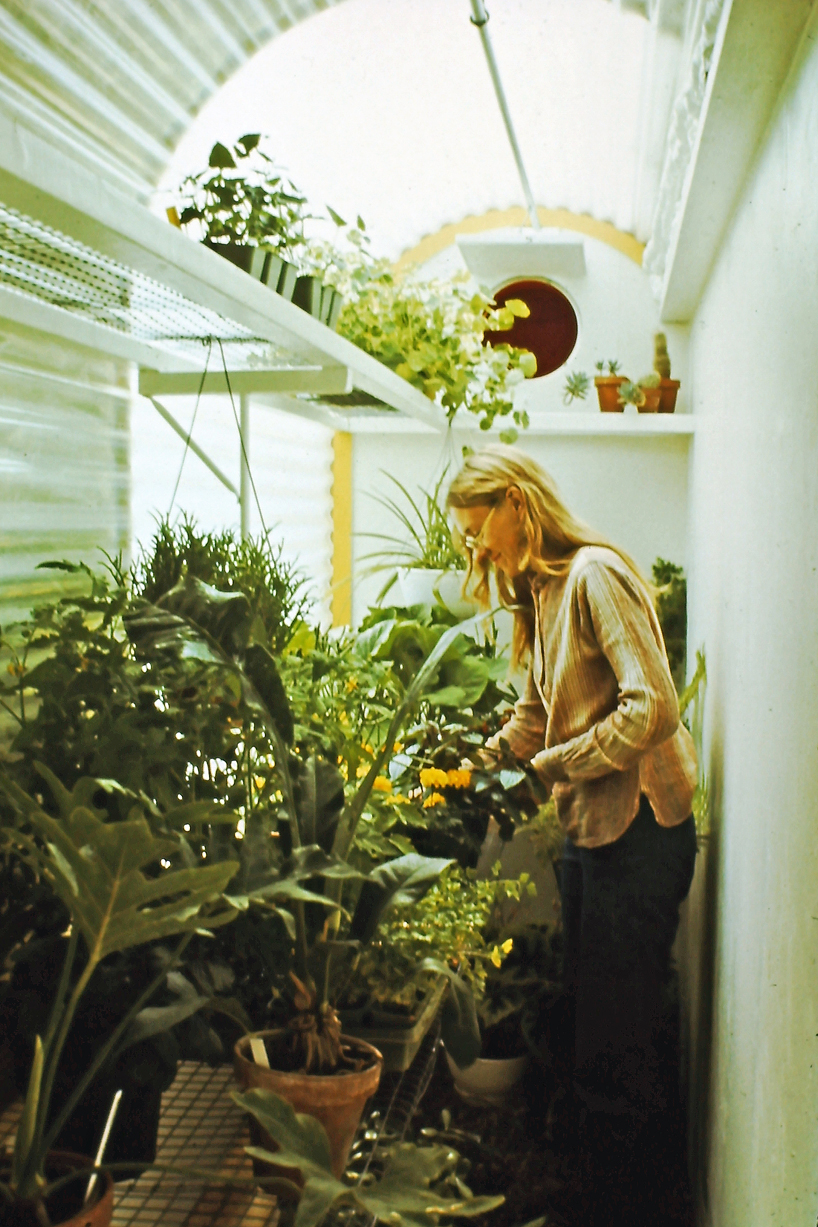 ‘the insulated blanket greenhouse’ inside 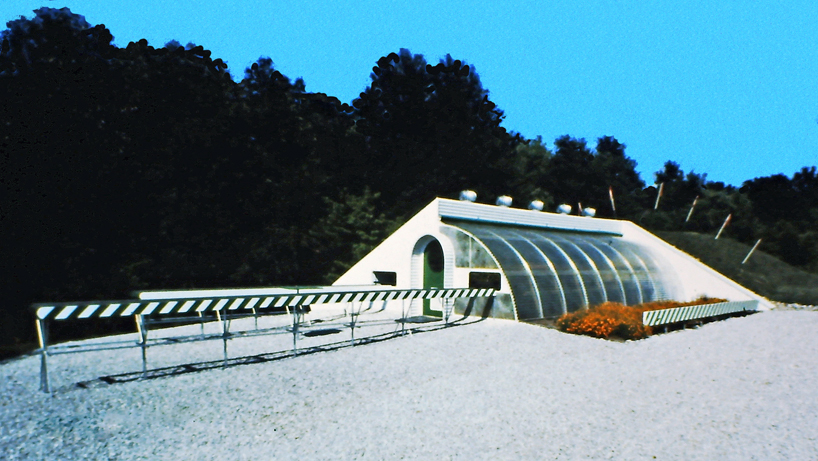 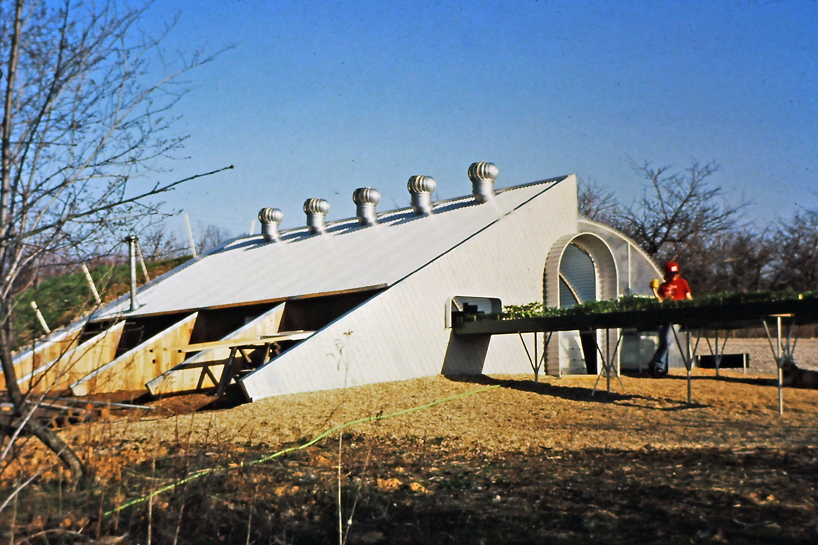 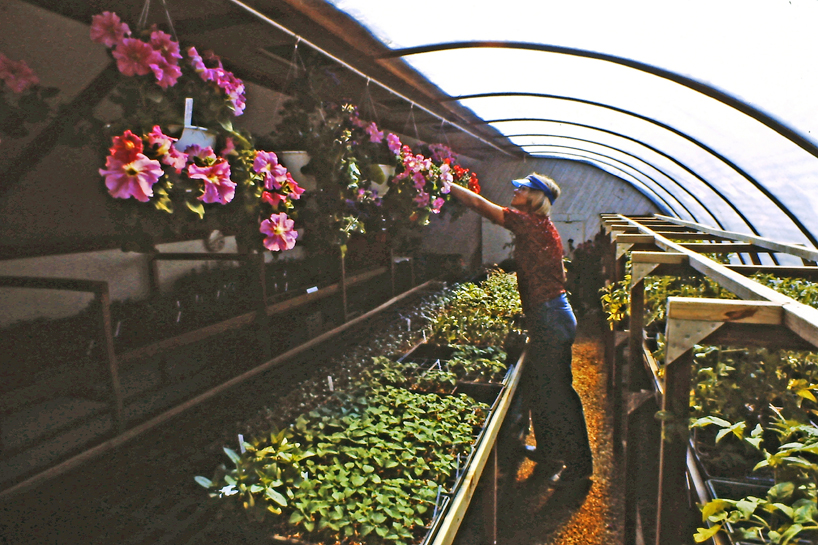 ‘the commercial greenhouse’ inside