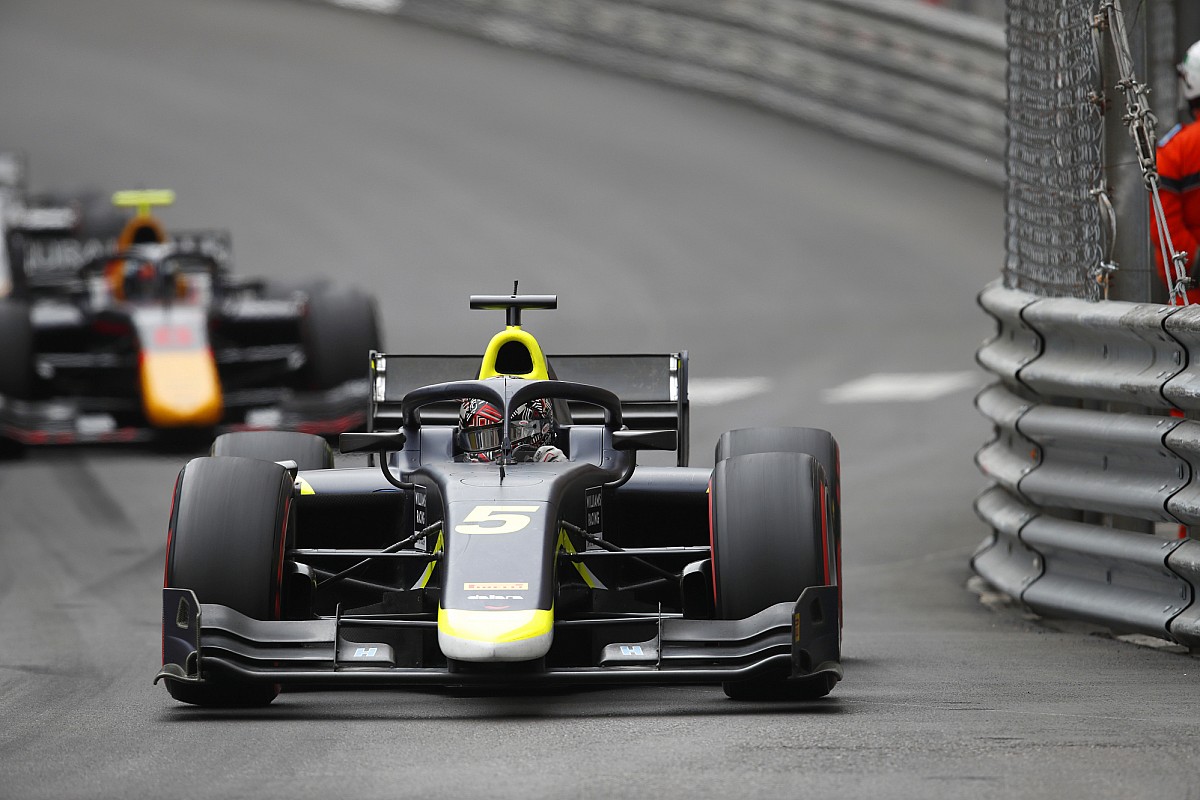 Championship organisers have overhauled calendars and formats for F2 and Formula 3 this year as part of a cost-saving strategy, with both series contesting the same amount of races but over eight meetings instead of 12.

While the two championships no longer appear on the same bill at Formula 1 events in a move to cut teams’ expenditure, it has created lengthy gaps between events.

F2 drivers faced an eight-week break between the season opener at Bahrain and last weekend’s second round in Monaco.

However, the most extreme of these breaks comes after the sixth round Sochi (24-26 September) when there will be a 10-week gap between the next event in Saudi Arabia (3-5 December).

Ticktum labelled the gap between Bahrain and Monaco as “very boring” stating that he felt like more of “a full-time streamer than a racing driver.”

The Williams Formula 1 development driver believes fewer fly away rounds should be considered in future as a way to ensure the calendar flows better and saves teams money.

“It’s very boring. The gaps are just too big I think having more races over a weekend is great but I think this is a cost saving thing mainly,” said Ticktum.

“In my opinion we shouldn’t go to Abu Dhabi, Jeddah and Bahrain, maybe we should just stay in Europe and do more rounds so then we don’t have to spend as much money flying away, then we have more races.

“I mean eight week gaps as a racing driver is terrible – I feel like a full-time streamer, part-time racing driver at the moment, to be honest.

“It is what it is and it doesn’t give us time to prepare but you only need couple days at the factory after a race weekend even if it has gone badly. I want to do some more driving to be honest.”

“I think both formats and calendars have their pros and cons. After having eight weeks between the two rounds I think I prefer last year’s calendar at this point,” said Piastri, who sits second in the championship.

“I actually really enjoyed having some quick fire rounds last year and getting through them quickly.

“Unfortunately this isn’t our biggest gap in the calendar either, so it does get a little bit boring in the breaks but being a rookie it does allow me to analyse things as deep as I want and I have as much time as I want to work how I can improve between rounds.”

While the calendar is unlikely to change this year unless there are COVID-19 interventions, some drivers have found positives in having significant time between races.

“It’s hard one to be honest, I can’t say much as the calendar is the calendar,” said Prema Racing’s Robert Shwartzman.

“Even if its too long we have to adapt to it, it is what it is. I think these big gaps come because we have decreased four rounds as it was 12 now it is eight so that is where it comes from.

“We will have some breaks and maybe sometimes the breaks actually help I have experienced that sometimes a long break helped to allow you to train more and prepare yourself better and get your bad thoughts away and reset yourself.”

It is a view shared by the youngest ever F2 race winner Theo Pourchaire: “I think the calendar is the calendar. For sure I was at home and it was a bit too long but it is like that.”

“We will have two and half months towards the end of the year between Sochi and Jeddah so it will be longer, but it is part of the job to adapt yourself to not forget how to drive.”

The championship continues with a trip to Baku, Azerbaijan next week.

Winning is always awesome, even if it’s through luck

Palou, who also won the season-opener at Barber Motorsports Park, took the lead in today's ninth round at the final restart as...

Perez was fighting with Bottas in the closing stages of the race at Paul Ricard, and drafted past his Mercedes rival on...