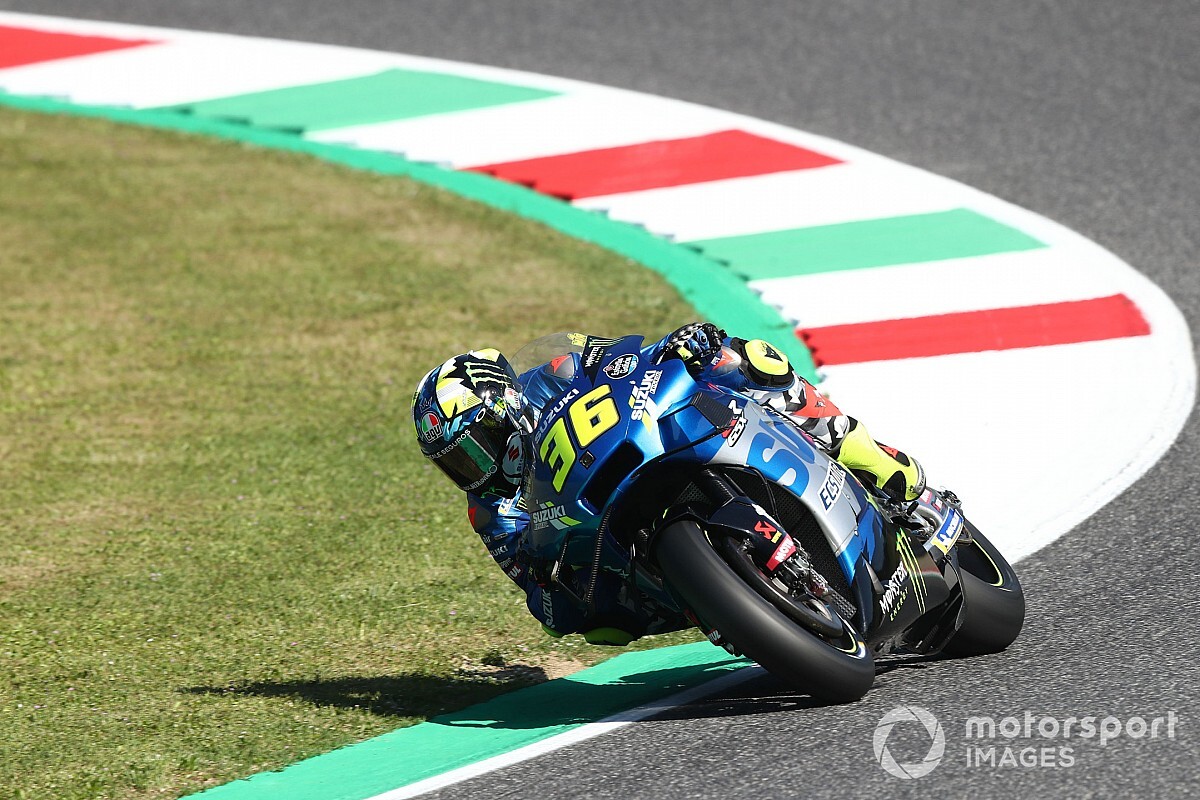 KTM’s Miguel Oliveira headed Mir for second place at the chequered flag in Sunday’s 23-lap Mugello race, but was subsequently demoted to third for narrowly exceeding track limits on the run into the Casanova right-hander on the final lap.

MotoGP’s current rules stipulate that a rider will be automatically demoted a place should they exceed track limits on the final lap of a race.

However, the positions were again reversed after it transpired Mir had committed the same offence at the exact same time.

MotoGP’s track limits rules have come under fire in 2021 after a pressure sensor system was deployed to measure any transgressions, which on a number of occasions has led to controversial penalties – most notably for Maverick Vinales in Portugal.

Suzuki rider Mir believes track limits rules should be tough as a point of safety, but says in racing situations on the last lap Race Direction must take a more “human” approach.

“Well, last lap always you have to be really careful with that because there are some points that you can’t avoid going there [onto the green painted surface],” Mir said.

“Now with the sensors, they are really, really sensitive to this now.

“Track limits is something that if we don’t put a limit it can be really dangerous because you can go every time out of the track and after the green there’s grass, and if nobody says nothing we will touch the grass and we will make the track wider.

“So, it’s important but I think in this case – or in the last laps – I think in Race Direction there’s a lot of people that were riders and it’s something where the human part has to take the decisions.

“I’m sure they will say ‘no, but it’s better the machine decides’.

“But in the last laps, you have to understand that if this rider gains time or not and it’s like this. No discussion.”

For his part, Oliveira notes it’s difficult to handle a MotoGP bike at the section he ran off at and doesn’t believe he gained any advantage as a result.

“I don’t think I gained any advantage touching the green there.

“I think even in Misano last year we asked to extend the painting out of the last corner just to avoid this kind of situation.

“To manoeuvre the bike at high speed on the exit of that corner is quite hard and so it’s already a fight just to stay in the track.

“So, to touch the green at high speed when you are already looking at the next corner is quite hard [not to do].”

After the race, the Pramac team went to Race Direction to argue that fourth-placed Johann Zarco should have been promoted to second due to Oliveira and Mir’s track limits penalties.

Pramac felt a precedent had been set in the earlier Moto3 race, when John McPhee was promoted from ninth to seventh due to a track limits penalties for Pedro Acosta and Sergio Garcia in seventh and eighth.

Race Direction believes a rider gains 0.5s by running wide at the exit of Turn 5, but because Zarco wasn’t close enough to either Mir or Oliveira he couldn’t be promoted.

Autosport/Motorsport.com has learned that the Pramac team accepted this explanation.

Here4dBesthttp://here4dbest.com
Previous articleRandom: Can You Spot Your Favourite Pokémon In This Huge Art Piece?
Next articleConfidence High Ahead of Magic Millions Yearling Sale

Gasly now one of the “absolutely top drivers” in F1

Gasly finished third in the Azerbaijan GP, recording the third podium finish of his career after his win in Italy last year and...

The Dutch 20-year-old, who currently lies fifth in the NTT IndyCar Series, “was involved in an accident on a cycling trail during...