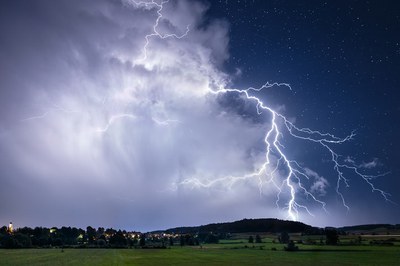 Lightning hits the ground in a 2017 thunderstorm in Bavaria. Researchers in this study wanted to measure how lightning generates certain elements essential to atmospheric oxidation.Getty

OVER TWO SUMMER DAYS IN JUNE 2012, a NASA aircraft called DC-8 daringly flew at a speed of 200 meters per second through deep clouds and threw itself into the eye of a tumultuous thunderstorm.

DC-8 undertook this harrowing journey for one primary purpose: to understand lightning’s ability to clean Earth’s atmosphere. The specific kinds of measurements performed here “are the first-ever in thunderstorms,” William H. Brune tells Inverse. Brune is one of the authors of a new study detailing DC-8’s findings and a professor of meteorology at Pennsylvania State University.

What the craft found on this intrepid journey could change the course of atmospheric science as we know it. But more immediately, these measurements hold some pretty strange implications for how we can best face the climate crisis.

Here4dBesthttp://here4dbest.com
Previous articleHow continental Europe is emerging from Covid lockdown | Coronavirus
Next articleNext Week on Xbox: May 3 to 7

Ice Follies – Watts Up With That?

Guest Post by Willis Eschenbach I keep reading that one of the horrible terrible predicted consequences of the ~ 300-year gradual warming since the...

The Looming Oil Shock – Watts Up With That?

Guest “You get what you pay for” by David Middleton Hat tip to Jan from the Netherlands… It’s Too Late To Avoid A Major Oil...